Bryan Hearns is no newbie to designing for celebs. The Fashion Institute of Design and Merchandising alum stayed in Los Angeles after graduating in 2010 and linked up with Style PR’s Antonio Esteban, who acquainted Hearns with the many names he works with today. From Keke Palmer to Kylie Jenner to Selena Gomez, the 26-year-old has had no shortage of it-girls to dress in his eclectic designs.

The new year came with another challenge for Hearns: dressing Ariana Grande for her Dangerous Woman tour, which kicked off Thursday in Phoenix. Grande is no stranger to his work: She rocked Hearns‘ designs on Billboard’s August 2014 cover and donned a custom top by him at the iHeartRadio Jingle Ball. When Hearns was approached by Law Roach, stylist to Grande as well as Zendaya and Celine Dion, to develop her Dangerous Woman tour outfits, it was a match made in fashion heaven.

Hearns discusses working with the pop star, his favorite look from the tour, and the difference between creating his beloved street style and designing performance wear.

What was the collaborative process like while creating Ariana’s tour looks?

I met with Law and we discussed the direction she wants to go in. She’s trying to do a different direction with her style, and this tour kind of encompasses all of that. It’s kind of street style — everything that’s happening now. So we had a meeting and went over the images and silhouettes that she likes.

It was awesome. He has a really good sense of direction. He lets you know if he likes something or not, but he also gives you your freedom to create what you want. 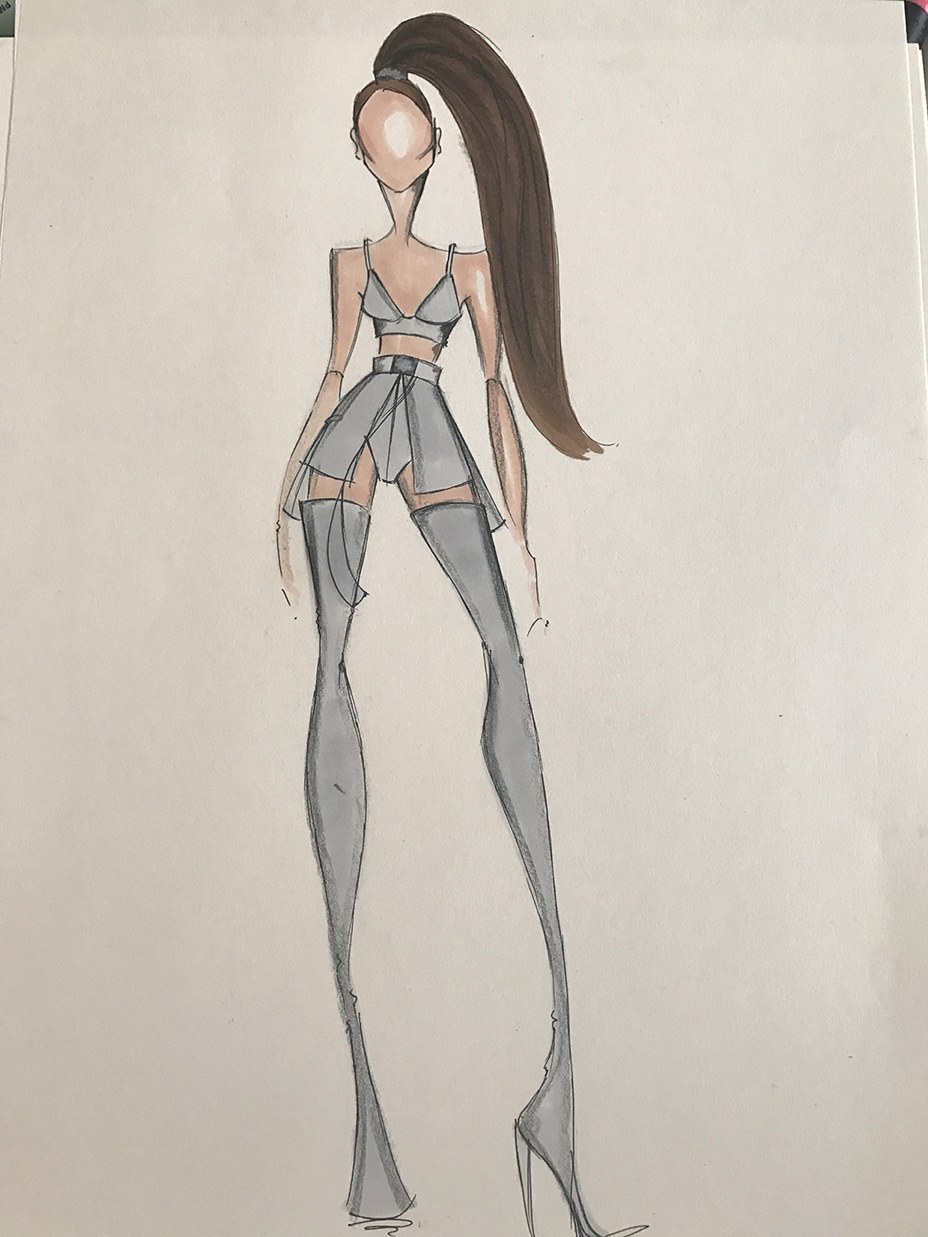 So were you given a lot of creative freedom for this tour?

Yeah. Most of the looks are my direct aesthetic, so I put my stamp on it. It was just a certain silhouette that she wanted and certain colors, and that’s how we met in the middle. We had a couple of looks that were in her silhouette, which is usually high-waisted bodysuits, shorts, skirts and crop tops. It’s very flattering on her so we have a lot of items in that shape.

What materials did you use?

Everything was a mixture of leather, denim, strappy fabrics (because there’s a lot of straps on everything) and hardware. We use a lot of sweatshirt fabric because everything is very relaxed-looking. It doesn’t have a lot going on in terms of the details.

What would be three words you’d use to describe the collection?

What is your favorite look from the tour collection?

I think my favorite one is going to be the white two-piece. It’s a crop top and a bodysuit skirt with a leather flap. She’s also wearing it with a big puffer jacket. It’s all white and it’s super crispy with thigh-high boots. It just looks really chic.

How long did it take to put all of these looks together?

It was pretty quick because I heard about the job maybe two and half weeks ago and we had to scramble and get everything ready to go. So we’ve been working all the way up to today, and the show’s in a couple of hours and we’re still getting last-minute things done.

Wow, that’s really intense. What’s it like to work under that kind of pressure?

It’s kind of stressful, but it’s also exciting because you have to problem-solve really quick. Sometimes you’ll get an idea that you wouldn’t have thought about if you had more time to think because sometimes when you have a lot time, you change your mind too much and then you’re not certain on exactly what you want.

What’s the difference between designing for Ariana and other people, like Keke Palmer or Kylie Jenner?

The difference is when I design for Ariana, it’s more like a custom idea — more for performance. And then for Keke and Kylie, it’s more for streetwear and things that they would wear when they’re walking around. And they tend to wear more from my collection. Ariana is more specific to her.

When it comes to the difference between performance wear and streetwear, what’s the big difference for you in terms of designing?

You have to keep in mind that they’re going to be moving around and dancing, and things have to last for awhile, so that’s what I have to think about. The other girls were more to look cool and it’s not as comfortable maybe as it would be to perform in.

What have you learned from this experience and how have you grown?

I’ve learned just to be patient and take whatever advice or direction someone’s trying to give you. Just problem-solve and go for it.