Giorgio Armani on Saturday presented his spring/summer 2020 Emporio Armani collection in Milan with a parade of suits and casual workwear, marked with flowing light fabrics, smoky prints and more riffs on his classic “parachute” line, featuring large crosses on the back, to hold imaginary gear.

This time the parachutes made their way onto the runway as models walked onto the stage as if coming directly off a landing jump. As usual, the Emporio collection had sports influences throughout, with models wearing bright blue sneakers, billowy anoraks, silky palazzo pants and shiny tracksuits. 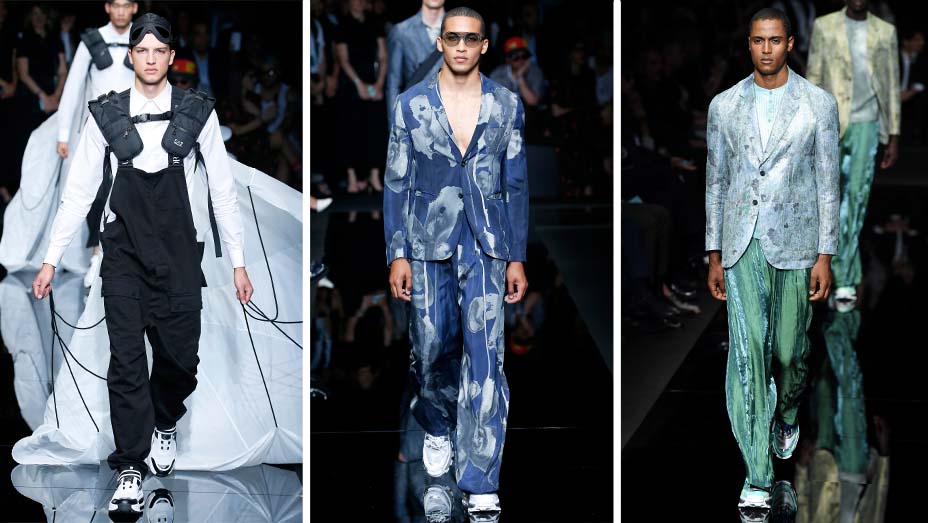 But the real stars of the presentation were not the models but the heroes of Italy’s Olympic and Paralympic teams, which took over the finale. Armani, who has designed the country’s uniforms since the 2012 London Games, used the show to debut the look for the Tokyo 2020 Summer Olympics. 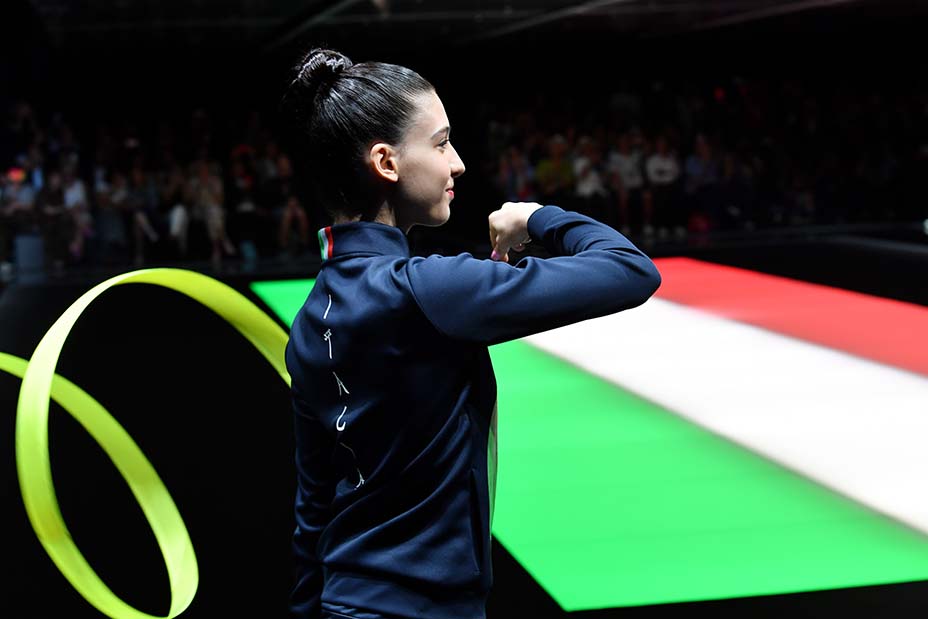 Italy’s top athletes, including 20 Olympians and nine Paralympians, made their way around the runway as the floor morphed into the patriotic stripes of the Italian flag. Matching black sneakers feature laces in red, white and green. 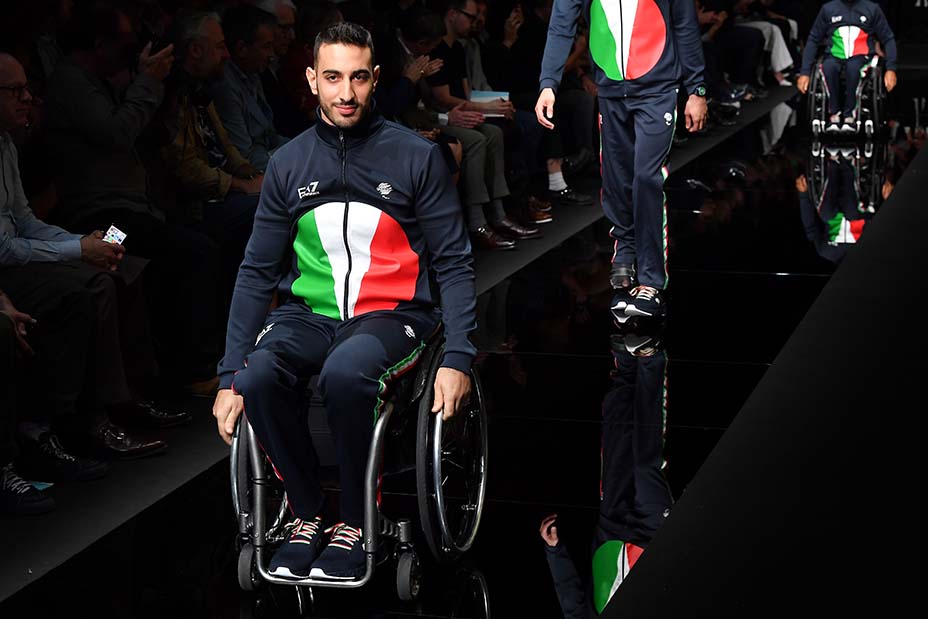 The EA7 sportswear uniforms include a soft jersey jacket, polo and pants, with “Italia” written on the back in typography that pays tribute to the host country of Japan. The Italian flag covers the front of the jacket and shirt, transformed into a circle, another tribute to Japan, in a redesign of its flag.

Inside the collar of the jacket is printed in gold “Fratelli d’Italia,” or “Brothers of Italy,” from “The Song of Italians,” the country’s national anthem. The full lyrics to the anthem are printed on a tag inside the jacket over a traditional Japanese temple.

Among those walking included superstar athlete Bebe Vio, a wheelchair fencer who has previously served as a design inspiration for Christian Dior, and racing driver and paracyclist Alex Zanardi, who attracted rousing cheers as he high-fived front-row audience members. 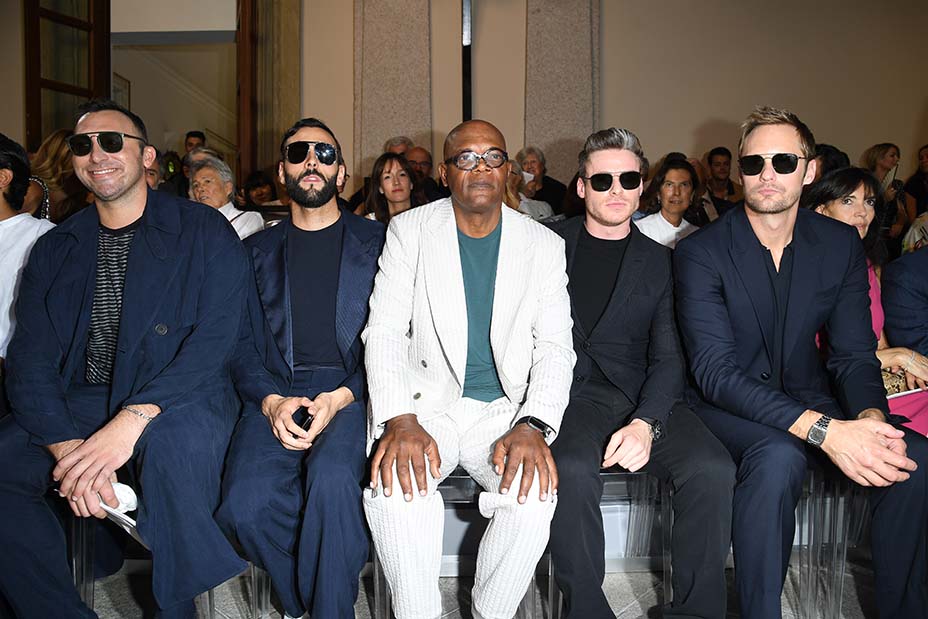 Armani’s Milanese spotlight was just beginning as he presented his next collection for his more upscale brand Giorgio Armani on Monday. The show attracted a slew of celebrity fans, including Samuel L. Jackson, Richard Madden and Alexander Skarsgard, as well as singer Marco Mengoni.

The collection showed off the perfectly tailored shirts and suits the designer is known for in a palette of navy and midnight blues. Featuring lightweight pinstripe and checkered jackets, breezy off-centered sweaters and shiny linen suits, the looks are sure to resurface on A-listers during the summer and fall film press junkets. 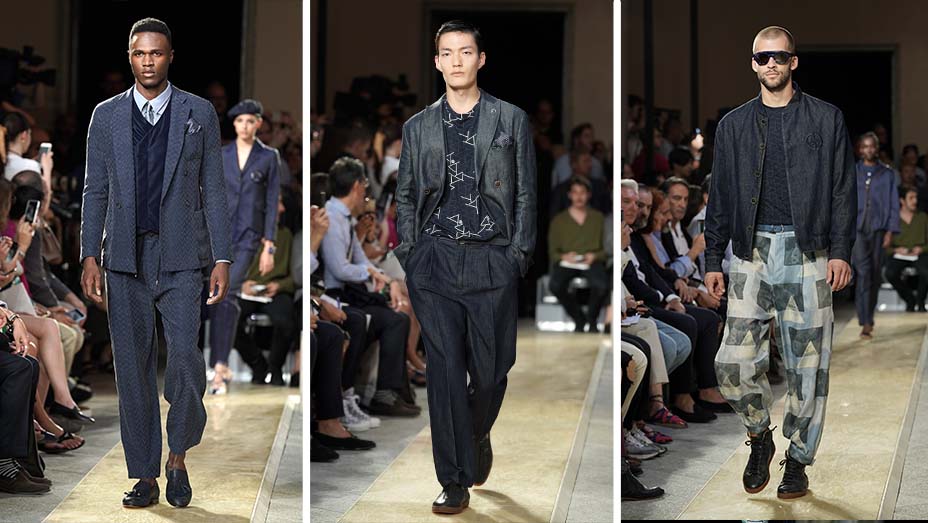 Overall, Armani showcased his skills in formalwear that puts comfort first. Even a crocodile-print leather jacket appeared to be as thin as paper. An array of collarless jackets looked luxe in poppy silk colors or geometric prints.

Fans of the brand will soon be able to see the history behind Armani’s rise in the Milan fashion world. Mediaset’s TV series Made in Italy, which stars Raoul Bova as Armani and tells the story of Italian fashion in the 1970s, is set to debut this fall. 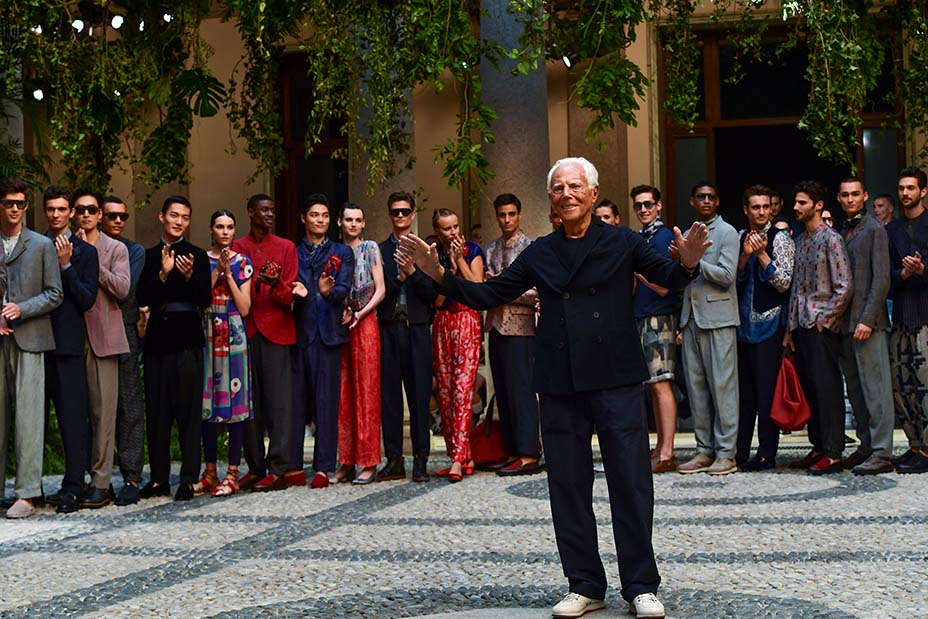