In a darkened concert hall in Manhattan on Thursday night, the horror of sexual assault was all-too-vividly brought to life with a recording of a 2015 police sting with Harvey Weinstein heard propositioning young Italian model Ambra Battilana Gutierrez and then angrily disdaining her when she resisted after also admitting he had groped her in a previous meeting.

It was a gripping prelude to one of the Women in the World Summit’s opening panels “#MeToo: Outrage From Europe,” as Gutierrez, actress-director-activist Asia Argento, and current Italian Parliament member and former chairman of the country’s legislative chamber Laura Boldrini all shared their anger and resolve with journalist Ronan Farrow of The New Yorker, one of the first to expose the Weinstein abuses.

"The Future Is Here": A Design Conversation With Kanye West

Founded by author and editor Tina Brown in 2010, the ninth annual Women in the World Summit is gathering a who’s who of international political leaders, CEOs, Hollywood notables, artists, activists and firebrands of the women’s movement that runs through Saturday. Also live-streaming from New York’s Lincoln Center April 12 to 14, it’s the global flagship for WITW summits across the globe.

“This is an incomplete moment of searching for accountability. There are still survivors of sexual assault, abuses of power and injustice everywhere,” Farrow said. “And Italy is a great lens of how far we still have to go.”

“I was 18 and following my dreams,” said Gutierrez, who was competing for the Miss Italy title as a springboard to work in television when her agent brought her to one of then-Prime Minister Silvio Berluscon’s infamous “Bunga Bunga” parties. Though she promptly left and helped another young woman escape the alleged sex party, she was painted in the Italian press — controlled by Berlusconi and his allies — as an escort and an imposter while she was still in high school. She later testified against Berlusconi in court, but he was acquitted and she was vilified by the Italian media. “It was weird to see my dream could turn out so bad,” she said.

Farrow hailed both Gutierrez and Argento as early champions of the movement as well as personal heroes to him, since they were among the first sources to go on the record and face legal threats when they shared their experiences for his reporting, paving the way for others to come forward. 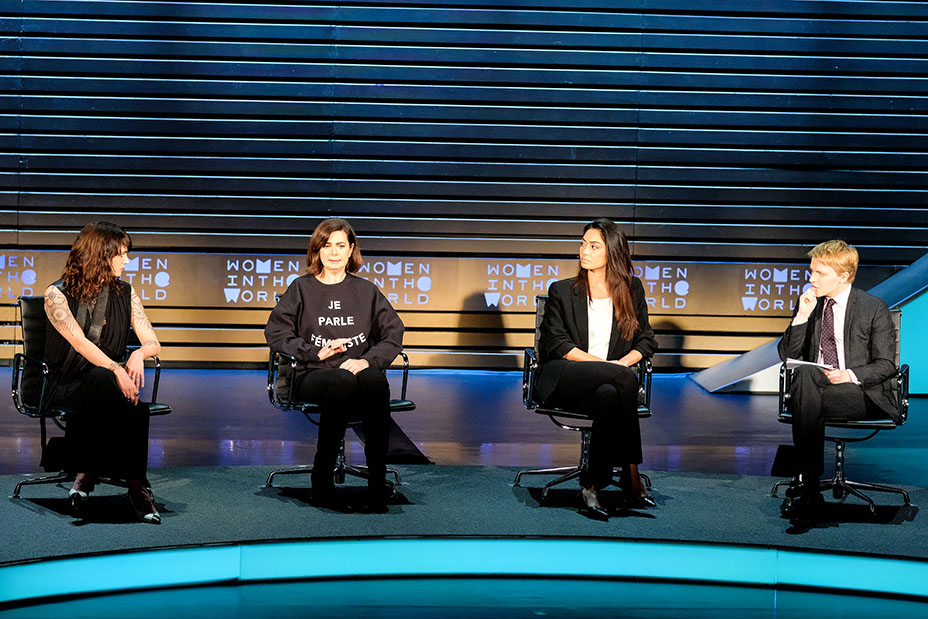 “I said, ‘Give my name to the other women.’ I felt it was a moment my conscience woke up,” said Argento. “And I knew it would wake up all the other consciences. I had to speak the truth and that was all there was to it.”

The Italian press erroneously claimed she had a five-year relationship with Weinstein, gained work from him and also called her a prostitute and opportunist.

“They said a person like me could not be raped, that I deserved it, that I wanted it,” she said. “It was completely distorted.”

Boldrini added that in the institutionally sexist backdrop of her home country, she had been disparaged by leaders of the Five Star political movement, with one of them comparing her to an inflatable sex doll at a rally and another member of his party suggesting sending rapists to her house “in order to make us men again.”

“If you deal with certain issues and you are a woman, you have to take into account certain treatment,” she said. “And I have to tell you if I were a man, I would not have been treated like this.”

Seven years later, Gutierrez is living in London after being hounded out of Italy and still pursuing legal action there in the Berlusconi matter. “Fortunately now they are starting to believe me,” she added. “Hopefully for me there will also be a happy ending.”

Nonetheless, Farrow said, one of the most “heartbreaking” things he had ever heard was that many women, like Argento, are not able to get away from their attacker and freeze in the moment.

“That’s why we have to have more of these conversations,” Argento agreed. “I don’t think a lot of people understand what happens to women when they are pressed by men. We fear for our life. We are paralyzed. That’s what happened to me.”

“This movement is the most important thing that has happened to women since the right to vote,” she added. “And if we stop this conversation, we are really doomed.”