As the spring 2018 collections at New York Fashion Week got into full swing on Thursday and Friday, designers and guests alike have been reacting to the tumultuous political climate in a different way than they did in February, when feminist T-shirts and Planned Parenthood pins were all the rage on and off the runways in the first weeks after the Trump inauguration, and women’s power suits made a statement in the front rows and on Hollywood red carpets.

So far, there have been more ACLU ribbons left on the seats than actually being worn. At the Calvin Klein collection, designer Raf Simons continued to mine the idea of the tarnished American Dream, this time imagined as an American horror. Although Hollywood stars Lena Dunham and Jenni Konner talked immigrants’ rights at the Daily Front Row’s Fashion Media Awards on Friday night, at the Harper’s Bazaar Icons party, most fashion stars avoided questions about President Trump’s decision to end DACA and how the changes in immigration policy under his administration could affect the fashion industry. Anger seems to have settled into something else, whether that be resilience or resignation.

Will New York Fashion Week's Runways Be as Politically Charged as Last Season?

Jason Wu, the designer who rocketed from no-name to fame after former first lady Michelle Obama chose him, a Taiwanese immigrant by way of Canada and then New York, to design her first inaugural gown in 2009, gave an interview to Page Six saying he doesn’t care about his clients’ politics. (Current first lady Melania Trump wore his pinstripe sheath dress when she was viewing the eclipse.)

Indeed, the collection Wu showed on Friday at the South Street Seaport was sensual, floral-and beautifully unaware—bouquet-bedecked dresses designed to spiral around a hot body, and striped shirts and dresses with strategic cutouts to reveal a tanned thigh or taught tummy. 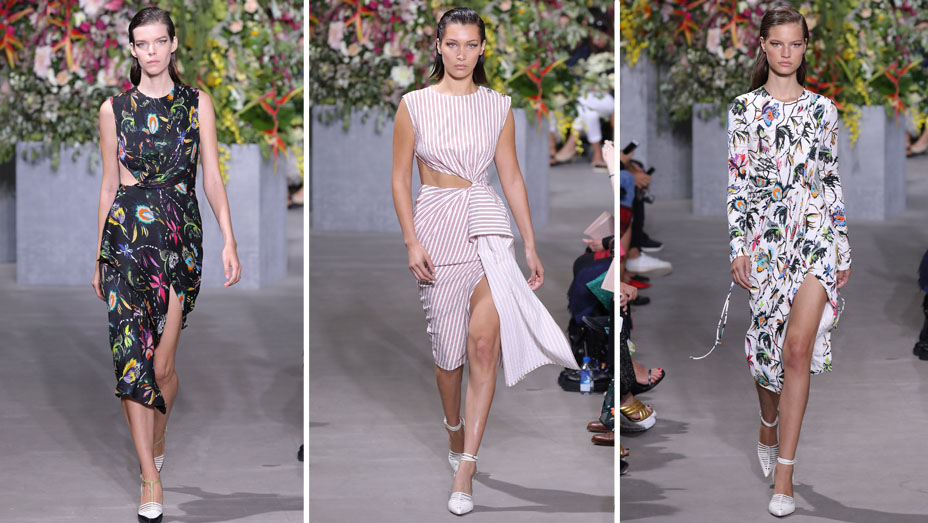 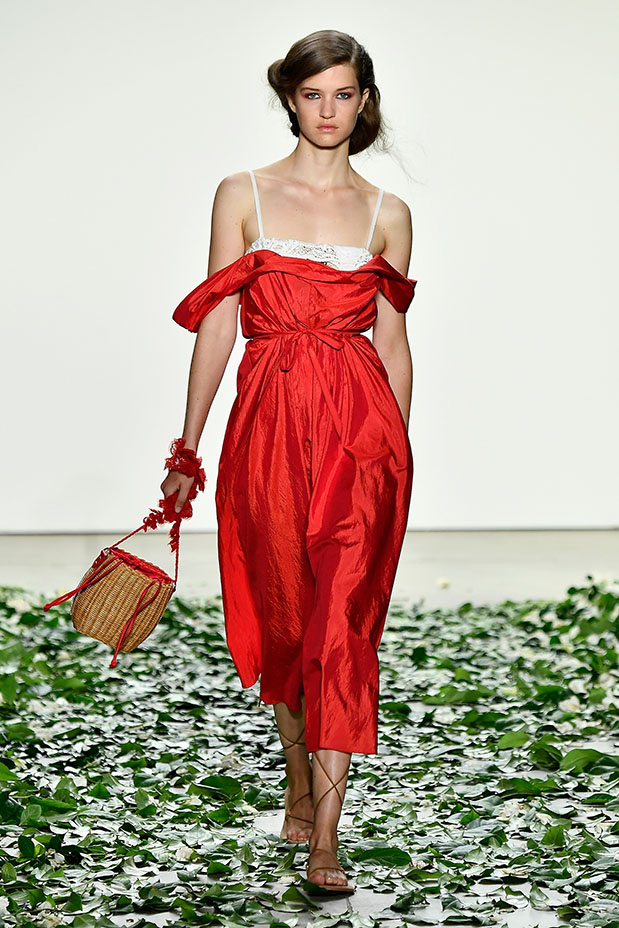 “I started with this feeling of nostalgia, childhood bedding, and nightgowns,” Vassar said backstage, explaining that the two develop all their own fabrics. As part of their CFDA win, Tom Ford is mentoring the duo, who have already made fans of Elizabeth Olsen, Alicia Vikander, Kate Bosworth, and more, so expect them to become even bigger red-carpet power players in the coming months.

There was another helping of sweet at Ulla Johnson—and another floral-filled runway—but with a side of self-awareness, too. The boho-chic designer, an everyday dressing staple for L.A. women, from off-duty Hollywood stars to moms doing school drop off, opened her first store in New York in April with a dinner attended by no less than Sarah Paulson and Michelle Williams. 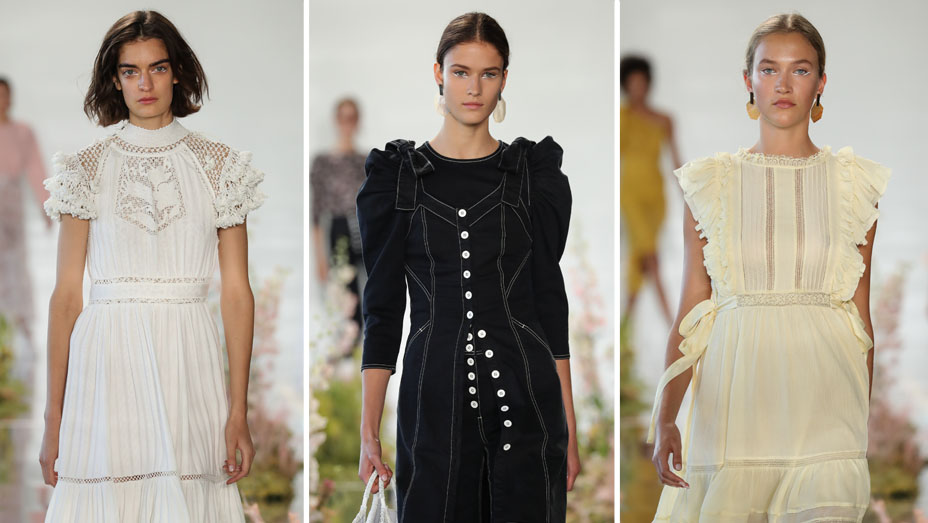 Johnson played with the idea of transparency “something that’s very much needed in our world today,” she said pointedly after the show, showing starched organza skirts and shirts with puff sleeves, patch-worked lace dresses, hand-crochet tops and flared skirts, and airy hooded anoraks, all in a colorful palette of pink, lavender, cream and white, with shots of chartreuse and acid green.

“I was also exploring this idea of invisible protection, and how clothes serve that function. We introduced a technical organza, a waterproof floral fabric that still has this incredible lightness.” (Fashion for the storm, real or political.) 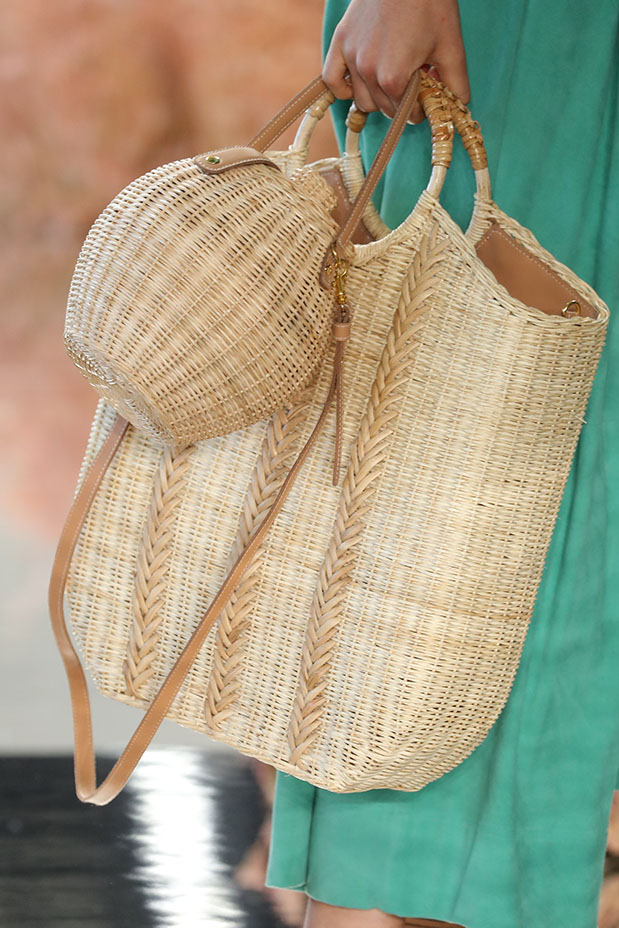 Johnson has been working with more denim, and this season, she treated the humble fabric in a more elegant way, creating black-and-white looks with exaggerated balloon sleeve and corsetry details. Inspired by Serbian dancing shoes, footwear featured hand-braiding and details on stiletto and boot silhouettes, lending an artisinal air, and bags were wicker again, but made into totes that actually looked sturdy enough for a woman to take to the office.

Seeing the two aggressively sweet collections back-to-back made me wonder if femininity could be a different kind of political statement this fashion season, and its own assertion of feminism? Or perhaps what we’re seeing is a rollback to the feminine mystique. Time will tell. 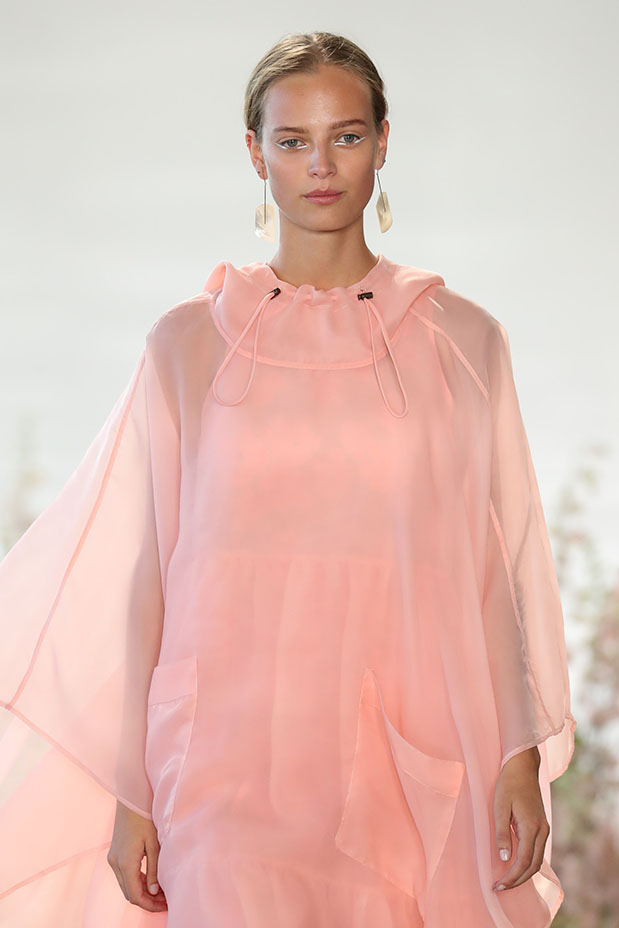