Sander Lak sure knows how to shake post-lunch fatigue.

The Sies Marjan designer’s late-afternoon presentation, staged at the Penn Plaza Pavilion on the rainy fourth day of fashion week, was a shock to the system — in the best way, of course. The designer known for his unmatched eye for color turned the haunting industrial space into a futuristic, Blade Runner-esque utopia with lights that pulsed seamlessly, from warm sunny yellows and tangerine oranges to deep Kool-Aid reds and blues.

As models came zigzagging out of the corridor, the light reflected off the shiny satins and glossy patents, taking on new tones altogether. An iridescent trench was the most striking display of this effect; however, a more subtle fabric that flashed from copper to navy, depending on the angle, was also a visual feast. 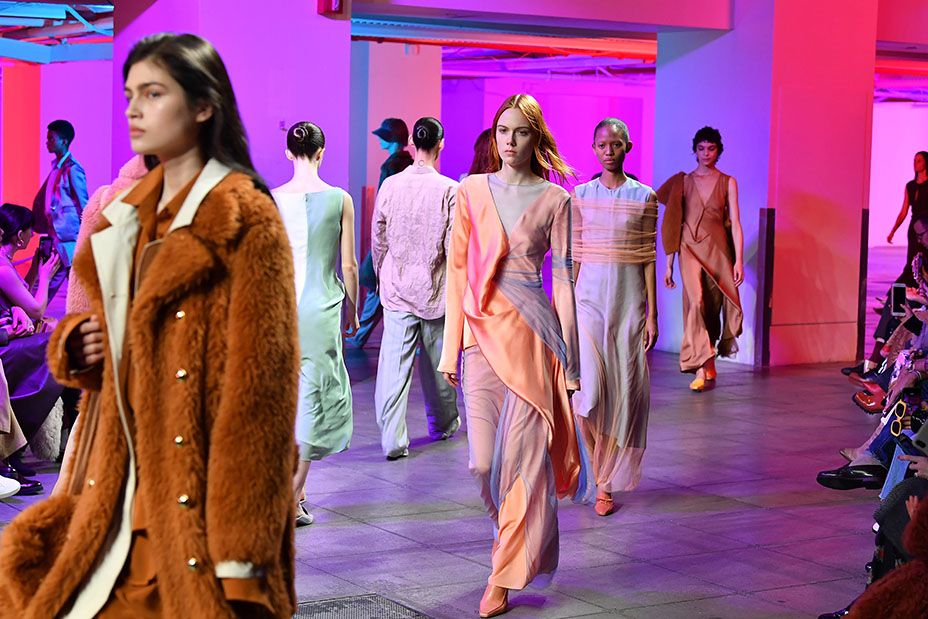 Even the play of hues within the garments themselves was a class in color theory — unexpected pairings faded effortlessly into one another, the perfect palette for Lak’s easy silhouettes, including wide-leg trousers and button-down blouses styled with loose-fitting blazers. Of course, the masterful ombres looked just as stunning when gathered into sunray pleats, layered in sheer gauze or printed on fuzzy bucket hats. 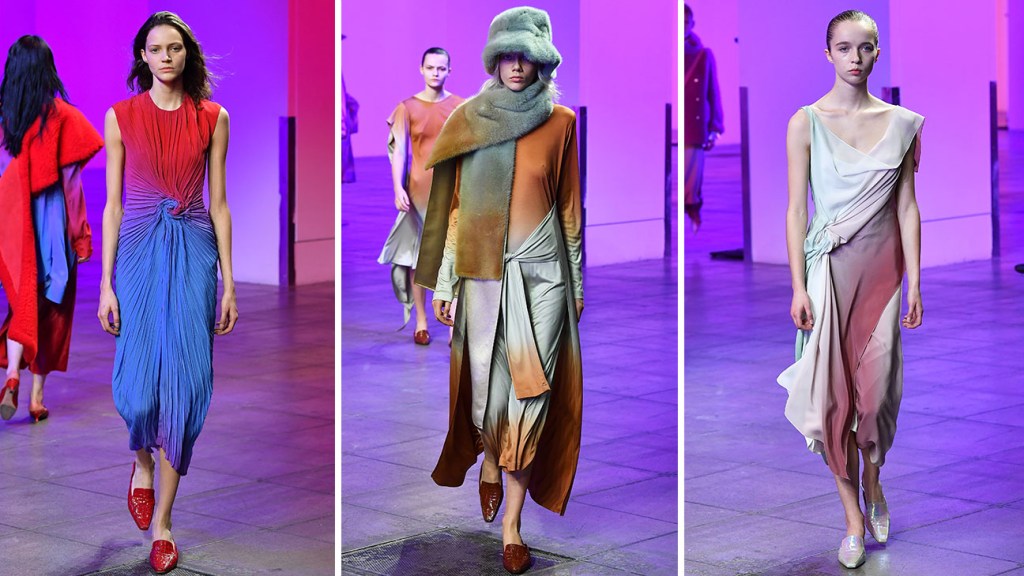 Instagram was alight with photos of the show, and whispers of “prettiest show of fashion week” could be heard among showgoers exiting the premises. 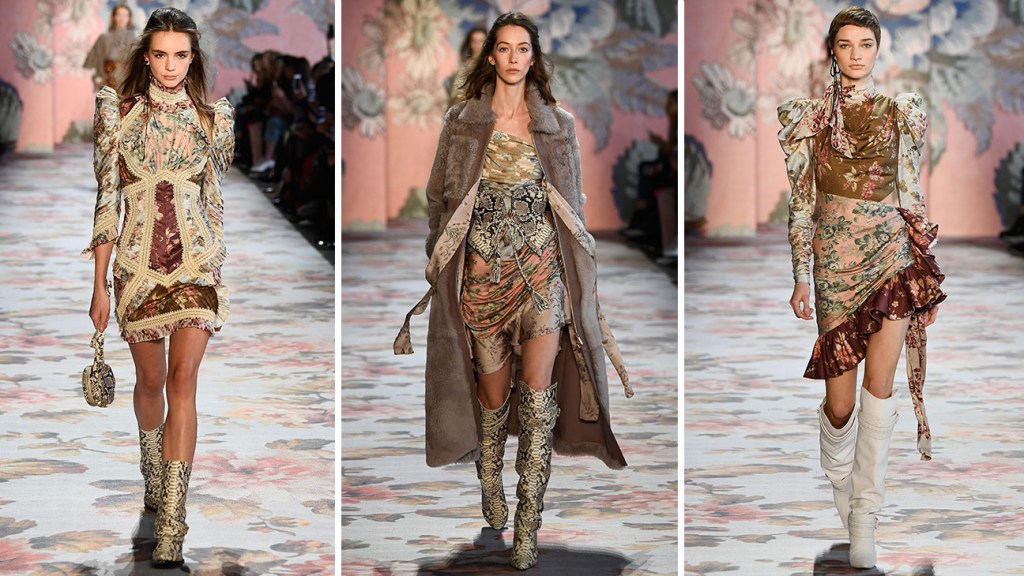 The following day, Zimmermann, too, offered a collection that was doing the most. However, while Lak wants you to take a chance on head-to-toe color, designers (and sisters) Nicky and Simone Zimmermann want their customers to embrace pattern mixing. Python snake skin, peony pink plaids and upholstery-inspired romantic florals in shades of salmon and rich magenta were thrown together all at once, making for powerful head-to-toe looks. Even the set featured a clash of patterns, with a pale-blue floral runway standing in contrast to the walls, which were decorated in yet another oversize dusty rose floral motif. 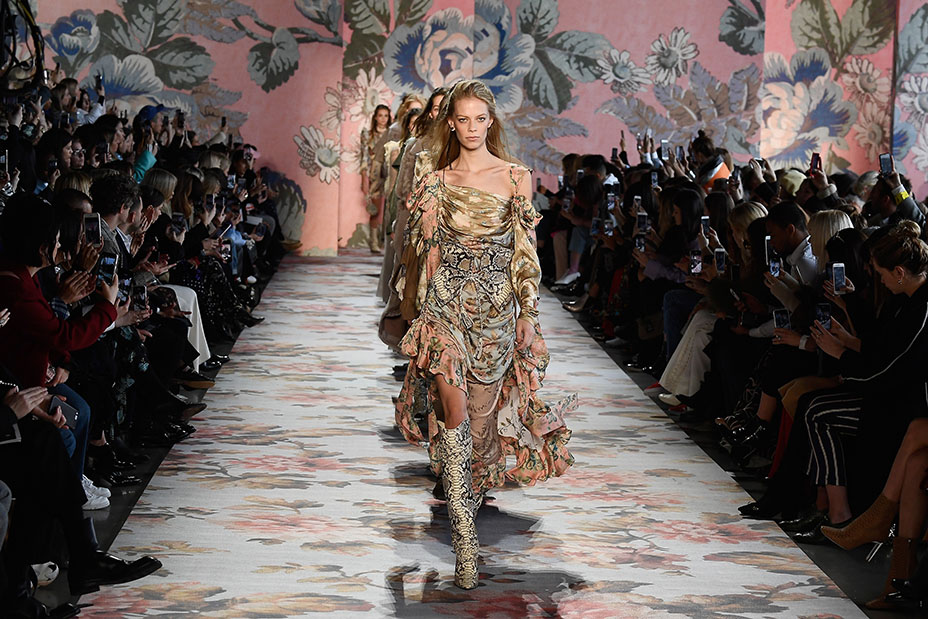 Drawing inspiration from a “youthfully adventurous Victorian era woman” but “through an ‘80s lens,” the flowing trenches and leather equestrian-inspired belt bags (Zimmermann’s take on the fanny pack trend, perhaps?) were executed with the precision tailoring control for which the Aussie designers are known.

Exaggerated, pleated shoulder detail, corseted waists and cinched wrists created a feminine silhouette, while knee-high slouchy leather boots and mismatched gem earrings in black added the modern, maximalist edge. An crop of cream-colored crochet tops and dresses were sure to please the brand’s core customer, too.

Like Cinq a Sept’s fall collection, the Victorian elements were more reminiscent of the scrappy, rebellious Jo of Little Women than prim and proper capital-L ladies of the same time period. Added Nicky in the show notes, “the overriding theme of the collection is one of escape and independence.”