L.A.-based size-inclusive womenswear e-tailer ModCloth is ringing in International Women’s Day early with the release of its latest brand campaign, “Against the Current.” Directed by Alex Prager — who has trained her lens on stars such as Glenn Close and Viola Davis — the photographer and filmmaker has captured a new set of heroines who each have tapped into an inner strength both in and out of the spotlight. The imagery depicts them surviving in a seemingly apocalyptic world.

Crazy Rich Asians star Awkafina (aka Nora Lum, who appears in the campaign alongside Halsey, Hari Nef and Dascha Polanco) chatted with The Hollywood Reporter in between takes for her latest film, Jake Kasdan’s Jumanji sequel (due out in December), about ModCloth and more. 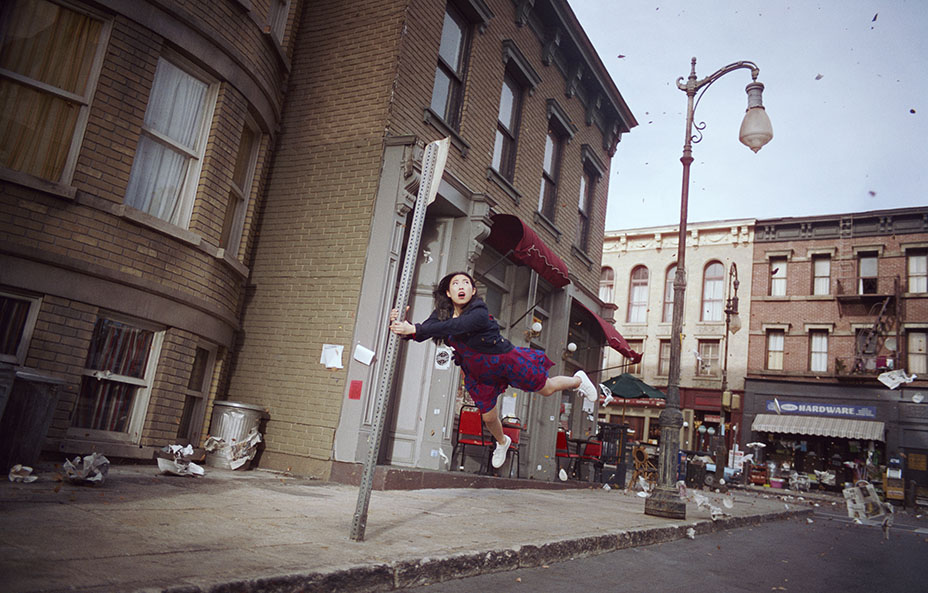 “I tend to look for brands with a certain uniqueness; [with] ModCloth, there’s a retro aspect and a lot of it focuses on the eccentricities of female bodies. That’s what drew me to them. As a brand, I think they’re doing amazing things,” she said of the company that offers sizing up to 4X. “The whole Mod Cloth message is definitely inclusivity and body positivity and loving yourself.”

In the campaign, the rapper-actress-writer is aptly seen defying a tumultuous wind that seeks to set her back. In real life, she says that she often turns to advice from her grandmother (“life is only a series of ups and downs”) to stay centered.

“I think that in life everyone’s down,” she told THR. “It doesn’t matter what circumstances are unique to you. Everyone faces down and everyone faces up. What we don’t understand is that in life, it’s never a happy medium between the two. It’s always either-or. When I’m down, I can only go up from there; also, when you’re up for too long, you expect to feel down. For me, getting out of that is knowing the rule of life.”

“As a woman we’re taught to be a lot of things, we’re taught to be very small,” she continued, speaking to the importance of International Women’s Day. “That’s been at the crux of the feminist movement. I think that it’s really important for women to be brave. Man or woman, you’re going to be faced with some kind of obstacle and I realized very early on that no one is going to help you pick yourself up. That’s going to be you. It takes strength, it takes courage, it takes bravery and it’s something that you have to teach yourself. It takes a certain stance to not allow yourself to be blown away.”

The future of Hollywood is looking bright. Love u @jennyhan and @lanacondor for inspiring me, and many girls out there w dreams. #thisisamerica

While emphasizing that believing in herself and having personal accountability are other key survival skills, the breakout star is also emphatic about advocating for others, calling it her passion and purpose as Awkwafina (the alter ego that she jokingly came up with at age 16 to express her duality).

“At my first show at Sarah Lawrence College back in like 2013, I was doing a lot of soul searching as to what this career would be, what it would evolve into,” she told THR. “And there was a young Asian girl who came up to me. She was so nervous to meet me, almost as nervous as I was to meet her, and she reminded me of what I looked like in college with all of the insecurities. She told me, ‘Thank you for existing, because if you didn’t exist, I wouldn’t know that it was possible.’ It was a moment that said there is a bigger reason for Awkwafina. When I’m older, when I have kids, [I hope] they’re so spoiled with representation that they never have to ask why there are no Asians on TV or why there are no women on this show. And I think that’s the real reason for me to keep going.”

The 29-year-old is also keeping busy with her new Comedy Central show Awkwafina, which tracks her days as a young millennial in Queens, N.Y. (from where she hails), noting that the show is equipped with an all-female writers room.

“I think that there’s a progressive shift in Hollywood right now,” she adds. “People’s diversity is not a trend. Diversity is something that’s just here to stay. The projects that I have been in were very reflective of that and I’m very lucky to have been on those sets.”