One would imagine that if famed Hollywood costume and fashion designer Adrian and couturier Azzedine Alaïa sat down to sip coffee and discuss style, they would have found much in common — namely, their razor-sharp tailoring. A new exhibit at the Foundation Azzedine Alaïa, Adrian and Alaïa: The Art of Tailoring, imagines just that.

Running through June 23, the retrospective also offered an opportunity to unveil a commemorative plaque on the building that housed the late French-Tunisian couturier’s atelier, store and home at 18 Rue de la Verrerie in Paris, where the exhibition is on display. According to artist Christoph von Wehye, Alaïa’s lifetime partner until his death in November 2017 and co-founder of the Azzedine Alaïa Association, the honor was proposed by the city council and Paris mayor Anne Hildalgo.

As a former hat maker’s son turned head designer for MGM studios in 1928, Gilbert Adrian dressed Old Hollywood stars such as Greta Garbo, Katharine Hepburn, Joan Crawford, Jean Harlow, Norma Shearer and Rosalind Russell, and he’s the man behind the costumes in over 250 films, including The Wizard of Oz and Philadelphia Story. Beyond that, Adrian went on to become an important American couturier in the 1940s with salons in Beverly Hills and New York. Those creations especially fascinated the young Alaïa, who admired the revolutionary broad-shouldered, narrow-waisted power suits that would lead to him one day amassing around 150 pieces of Adrian’s work. 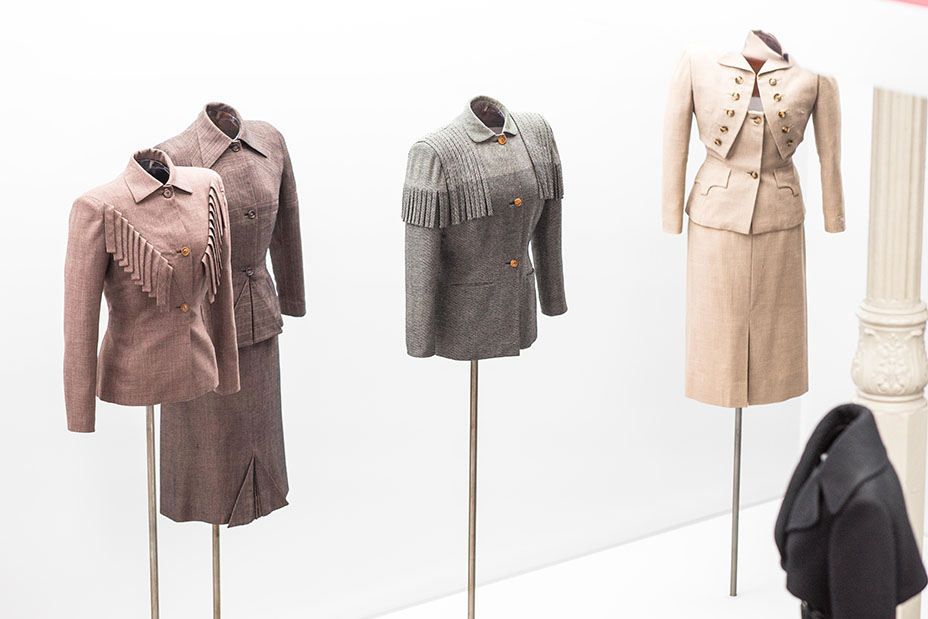 According to curator and Azzedine Alaïa Association director Olivier Saillard, Adrian’s son Robin (with actress Janet Gaynor) approached Alaïa — knowing both his interest and ability to pay — and proposed a sale. “He knew that Alaïa would be a good guardian,” said Saillard. “No one really knew Adrian in France; he was never exhibited here,” added von Wehye.

The exhibition marks the first time that Adrian’s designs are on display in France, as well as the first showing of Alaïa’s private collection of another designer’s work. Gallery walls are flanked by Adrian’s designs, while Alaïa’s work snakes through the middle.

Carla Sozzani (the Italian editor, gallerist and founder of the directional boutique 10 Corso Como, who works with the Alaïa Foundation) conceived the exhibition’s direction with Saillard. “I assumed it would be the evening dresses, because they are so Hollywood, but then Carla and I discovered these amazing tailored pieces that connected the two designers.” said Saillard. “They had a restrained aesthetic with subtle ornamentation. Both can look ordinary, until you get close and discover a world of detail.” But there are differences, too — Adrian crafted very plain backs, whereas Alaïa’s are decorated with 360-degree detail. 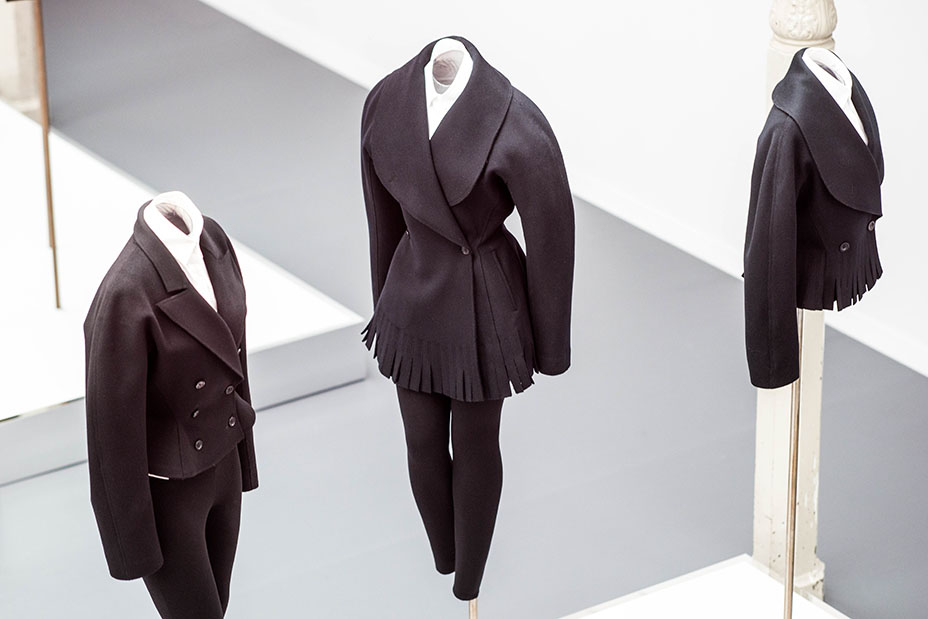 Both men were connected to the illustrious Hollywood star Greta Garbo. Adrian, who worked with her at MGM, was quoted as saying that he left when she “walked out of the building,” citing his reason as “all of the glamour went with her.” Later on in Garbo’s life, Alaïa came to work with the reclusive actress, designing her trousers and a custom-made, oversize navy cashmere coat. Von Weyhe recalls that Alaïa used him as a fit model for Garbo.

Quotes on display at the exhibition from each designer offer some insights into their fashion and design beliefs. Adrian says: “A good dress has to be becoming, useful, and beautiful. … Most people associate utility with drabness. A good dress has a sense of classical rightness that makes it wearable until it falls apart.” As for Alaïa’s wisdom: “Fashion will last forever. It will exist always, it will exist in its own way in each era. Live in the moment. It’s interesting to know the past, but you have to live in the present moment.”

In the back of the gallery, guests can catch two iconic (but very different) films depicting each designer’s work in action: Adrian’s costuming for the seminal 1939 film The Women (starring Shearer, Crawford and Russell) and the 1985 James Bond flick A View to a Kill, featuring Grace Jones’ character May Day clad entirely in Alaïa.

On hand for the exhibition opening was Cesar-winning French actress Elsa Zylbersztein, who will appear in the upcoming Roger Avery film The Human Voice, based on the famous Jean Cocteau play, wearing the last film wardrobe that Alaïa made before he passed away. (Zylbersztein has favored Alaïa for over a decade). Though she was new to Adrian’s work, Zylbersztein understood the connection: “When I wear my Alaïa, it’s like an armor and I feel strong,” she said. No doubt both men had a knack for that.