At Hollywood favorite Balmain on Thursday afternoon, Pamela Anderson was the main front-row attraction, arriving just minutes before the show started at the Paris Opera, where there was a simultaneous protest involving retirement benefits on the street outside. (Talk about a clash of cultures!) 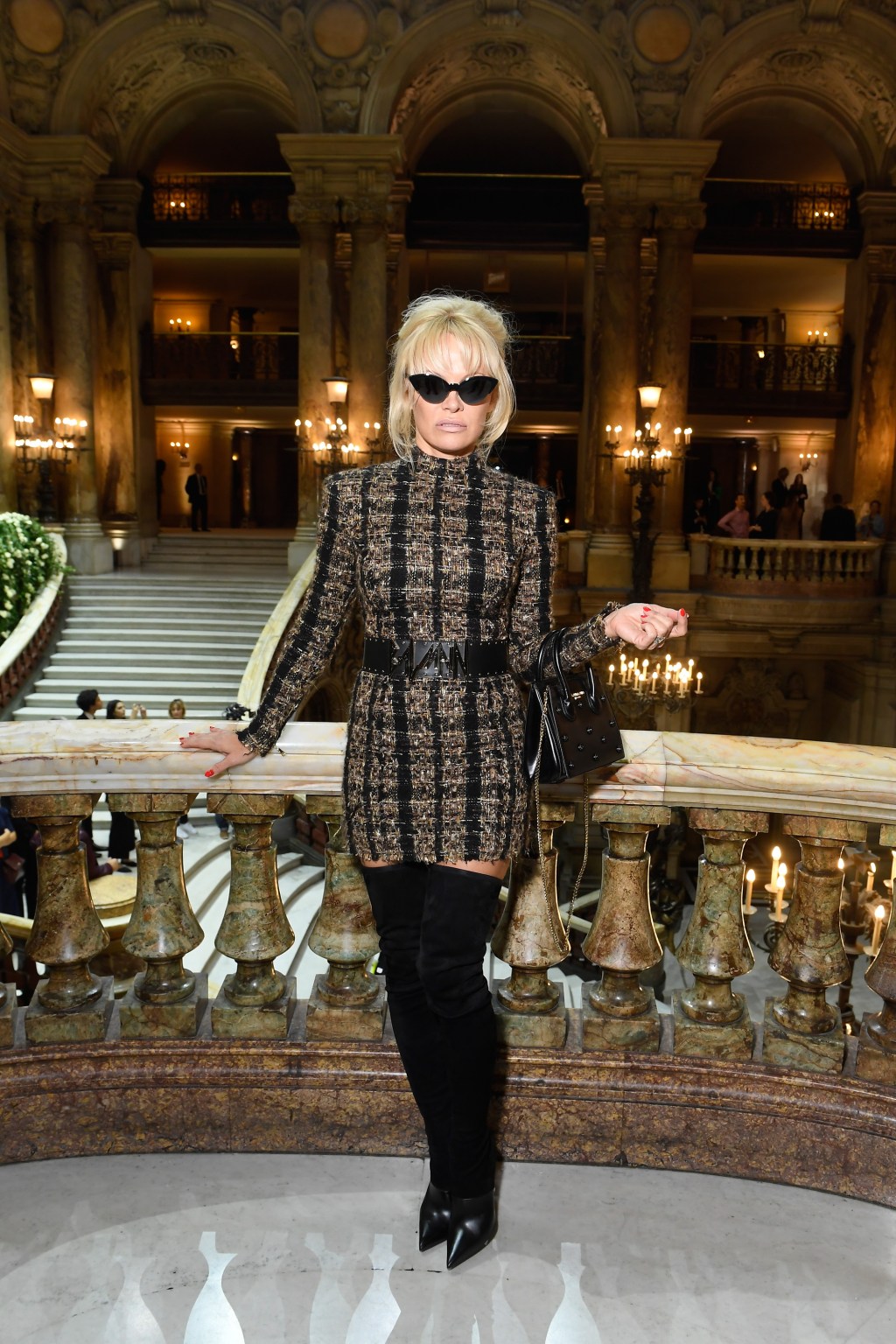 The former Playboy Playmate didn’t remove her sunglasses when she walked up the runway, and swatted away a question about Playboy founder Hugh Hefner, the man who helped launch her career, who died Wednesday at age 91. She had posted on Instagram earlier in the morning a photograph of herself in tears, along with a lengthy text saying, among other things, that outside of her family, he was “the most important person in my life.” 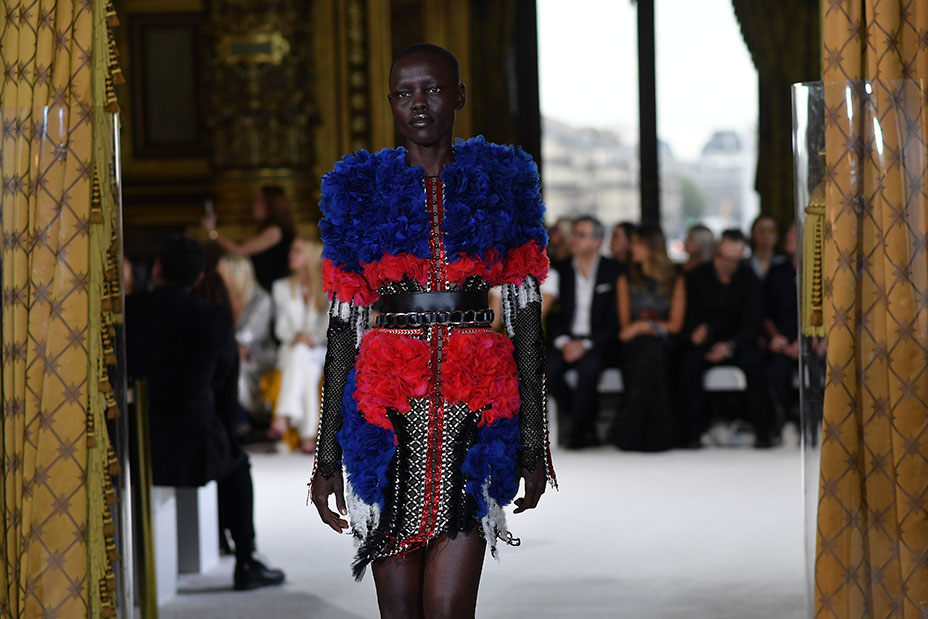 Anderson made a quick exit, too, leaving the typically starry Balmain show feeling a little dim, Claudia Schiffer and Diplo not withstanding. Indeed, Balmain was a rare Kardashian-Jenner free zone, though designer Olivier Rousteing’s biggest fans were there in the OTT-ness of the collection. Still, this was not one of his best; many of the pieces were so over-embellished and heavy, they competed with the baroque ceilings, and one had to double-check that we were indeed looking at spring and not winter clothes. 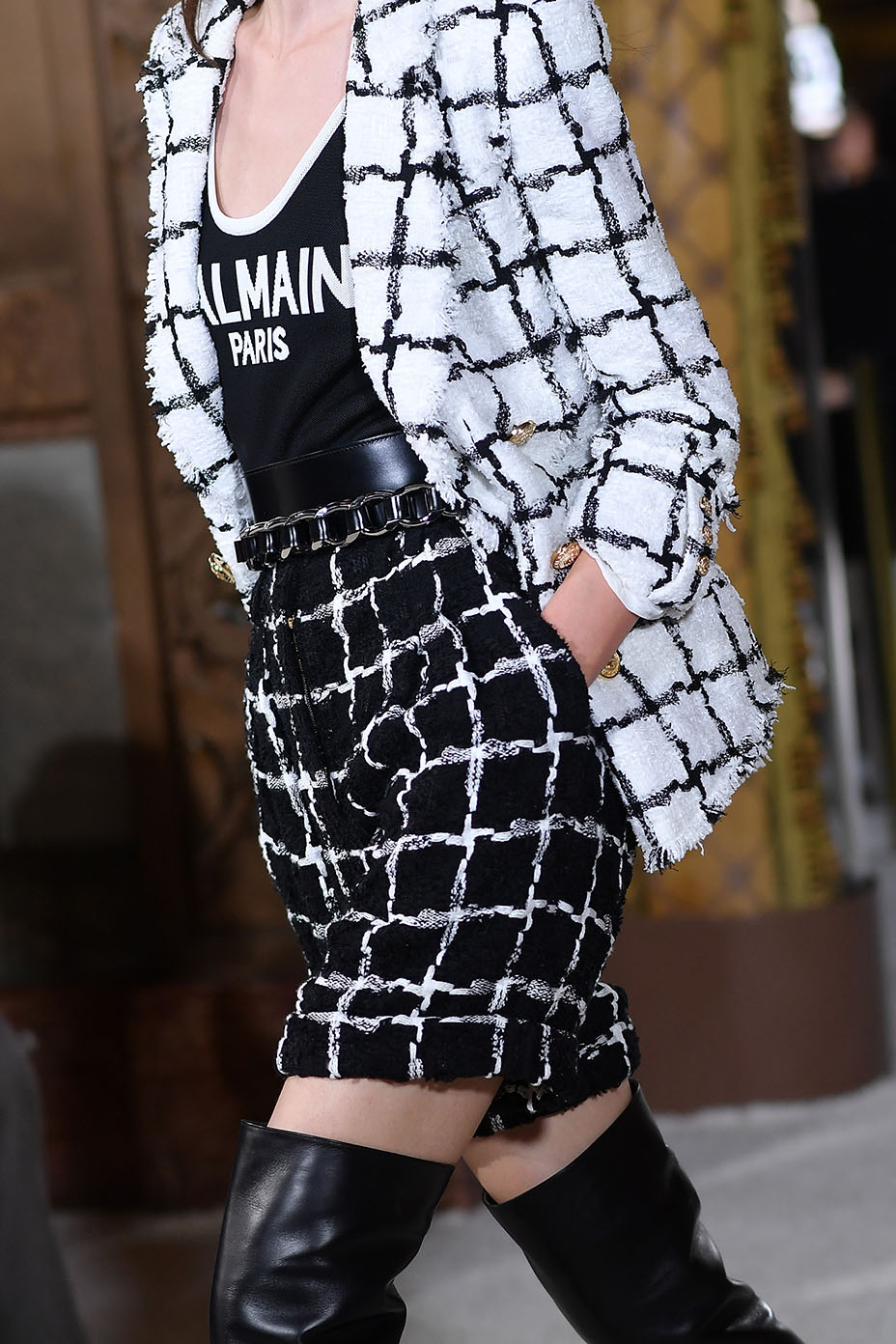 There were hobbling silhouettes with stiff ruffle skirts, mini dresses so densely embroidered with feathers that they made even a lithe model look a little thick around the hips, and patent leather pants and catsuits that were hot just to look at. The collection didn’t convey the freedom — freedom of movement or spirit — that Rousteing has made synonymous with the brand, or the tailoring chops. Boxy boucle coats and jackets just didn’t have a lot of sex appeal. 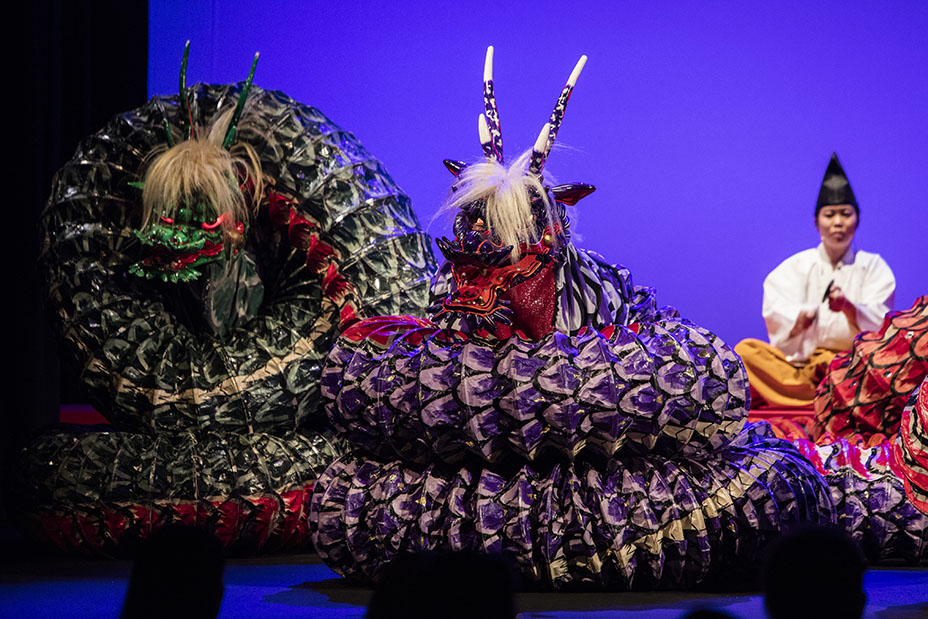 The Kenzo experience on Wednesday night was more uplifting, with an Asian night market set up beforehand with cocktails and bites and an extraordinary dance performance from a Kagura group all the way from Hiroshima, Japan — all to add some context to a reimagining of the first Kenzo Jeans collection from 1986. 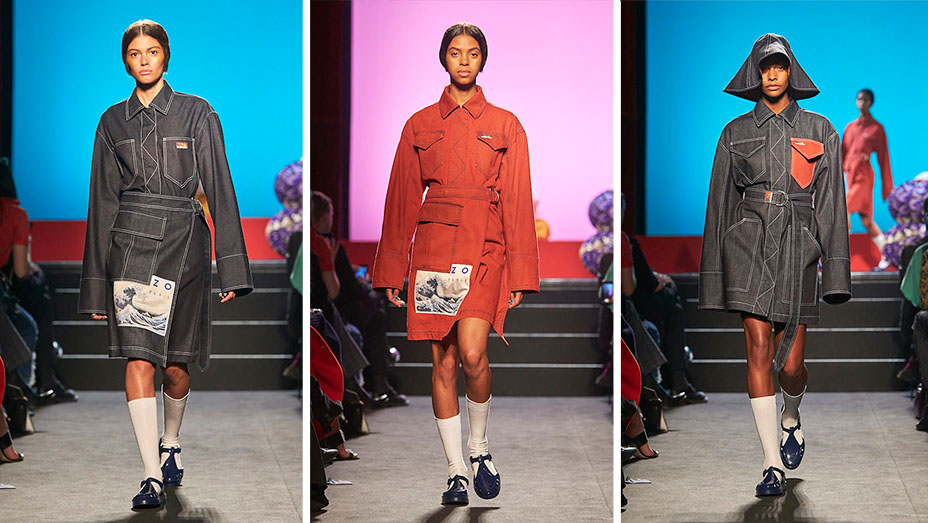 Kenzo designers Humberto Leon and Carol Lim’s vision translated into reworked summer staples with a Japanese touch — a fab denim kimono dress, high-waist jeans with the label featuring The Great Wave of Kanagama, Hawaiian print shirts, anoraks and hats. It was a lot of fun, even if some editors sniffed that the hour-and-15-minute outing was a waste of time. (They do call it a fashion show for a reason.) 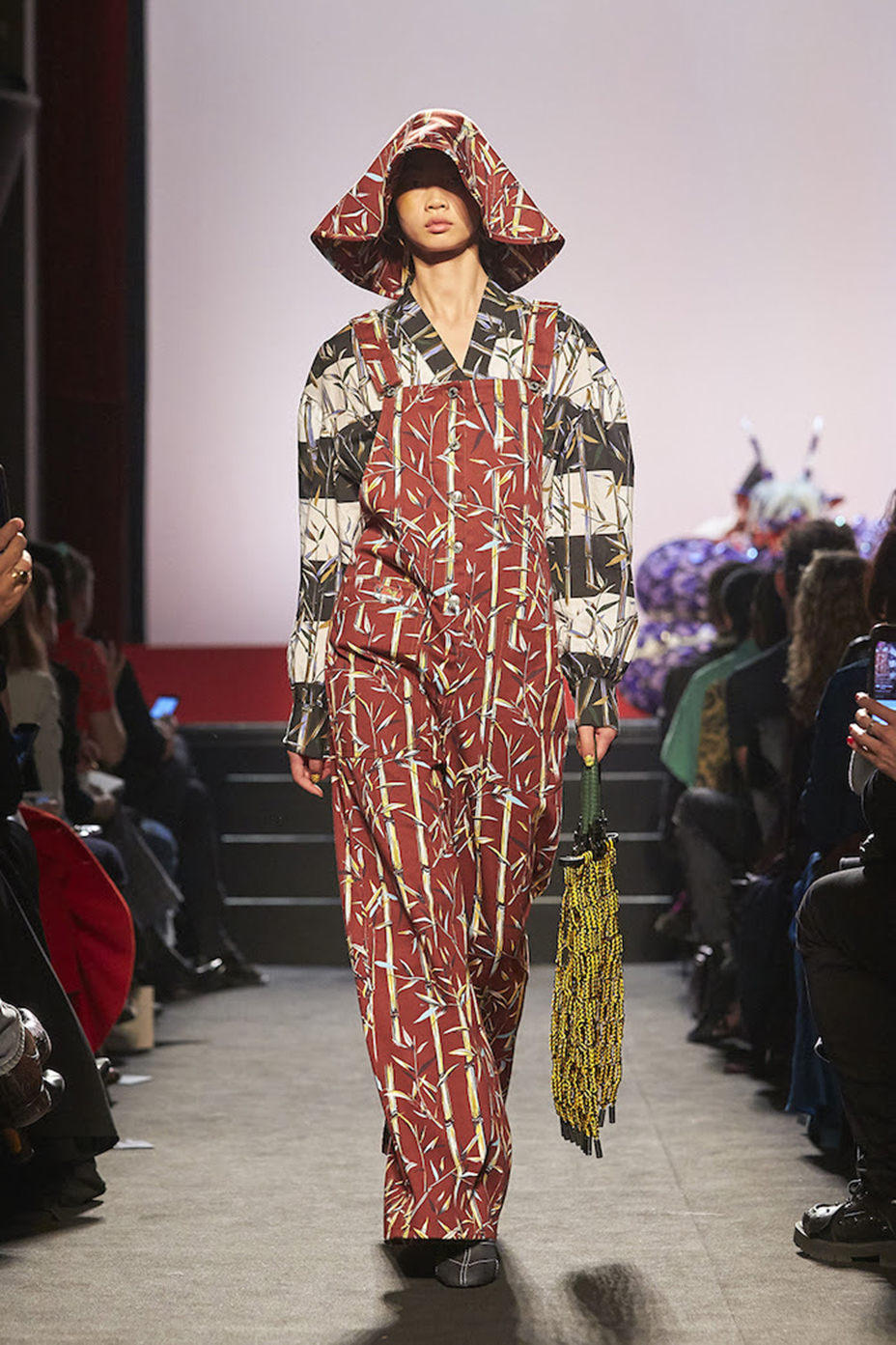 Rick Owens is another one who always gives us a show. This season, his set was an enormous rectangular pool outside the Palais de Tokyo, and his biggest coup may have been getting everyone in the front row to don Rick Owens-branded black plastic rain ponchos to weather his man-made storm, which started mid-runway walk and was reminiscent of the Bellagio’s dancing fountains. Ha!

Branded Rick Owens ponchos on the seats for his outdoor #PFW show pic.twitter.com/W33awZ3XvG 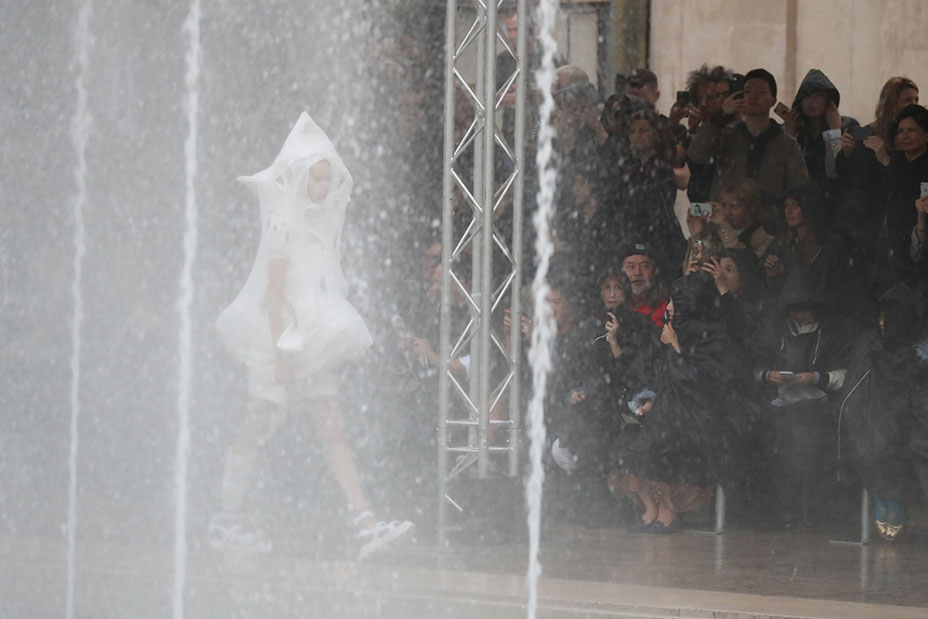 Owens wrote in the show notes that instead of being all gloom and doom over the sociopolitical climate we find ourselves living in, a sentiment he has indulged often with past collections, he decided to propose “experimental grace and form.” 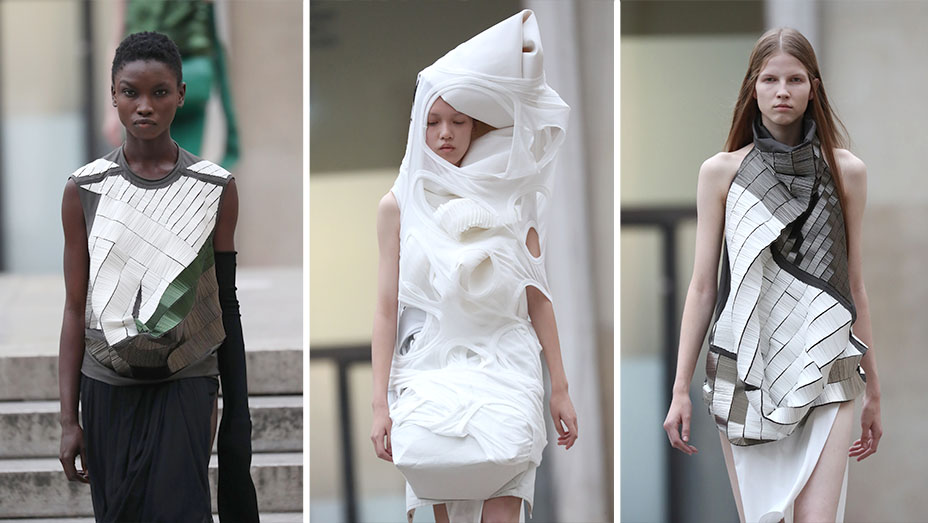 Thus the mostly-white curved and folded forms circling the body in twill gazar, shiny technical canvas or chalky matte rubber, worn with Teva-like shoes. These garments, along with the even more abstract amoeba-like pods, were Owens’ blank canvases upon which he hopes will be written a better future. At least that’s something.