Creating the unkempt locks of a free-spirited Floridian isn’t as carefree as it looks. Matthew McConaughey’s raggedy hair in The Beach Bum, which is in theaters now, required a veteran Hollywood hairstylist, two master wigmakers and a little help from co-star Zac Efron to complete.

Korine had spent time in Key West, Florida, where the pic takes place, and based Moondog’s looks on people he interacted with. “Harmony tends to really get down-and-dirty with the locals and assimilate with the locals,” Sparacino, who has lived in Miami for more than a decade, tells The Hollywood Reporter. “He really enjoys the colorful characters in Key West and in Miami — that’s why he loves it so much down here, I think.”

Since there wasn’t a budget for an $8,000 or $10,000 custom wig, Sparacino enlisted her Twilight friend and Oscar-winner Beatrice De Alba (The Hunger Games: Catching Fire) to make two standard wigs for McConaughey — with one as a backup due to the heat, humidity, wind and salt that could be detrimental while shooting, though it ultimately was only used by his stand-in. Another Twilight colleague Bob Kretschmer (wig maker for Wonder Woman and Captain America) helped out by doing a custom mold of McConaughey’s head and making a custom lace front.

De Alba colored the wigs to be a grown-out blond ombre shade, permed them and then sent them to Sparacino in one length. It was up to Sparacino to style the sun-bleached hair for Moondog, whom she describes as “under the radar and living off the grid.” 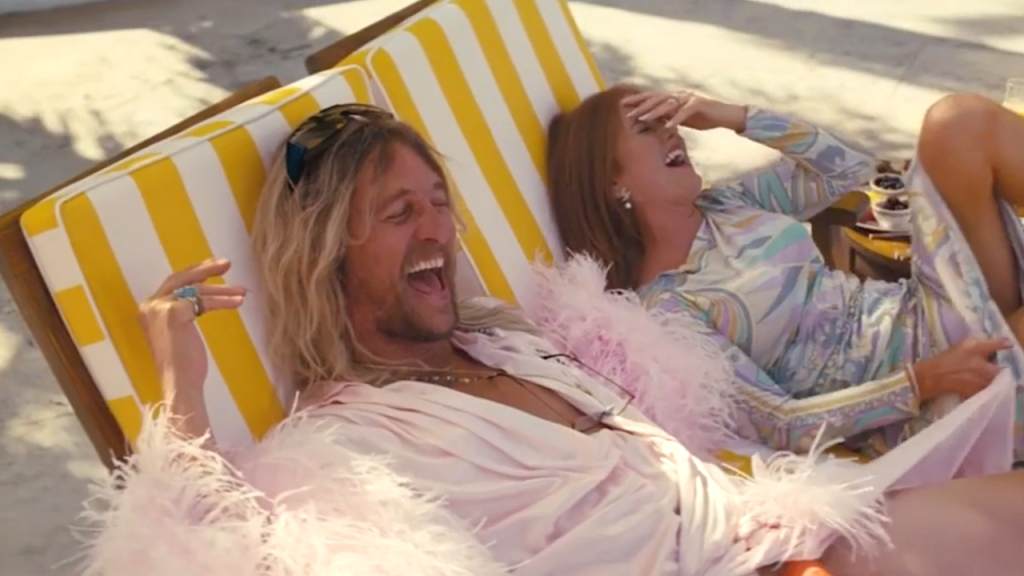 McConaughey grew out his hair (including that beard) for the role, so in what she calls an “unorthodox” move, Sparacino incorporated an inch of his natural hair into the final look. She tucked the whole perimeter under, starting from his temples down to the nape of his neck on both sides, to look “like the wig was growing out of his head.”

Sparacino didn’t dye any of the actor’s natural hair, saying, “He’s in the sun a lot. He’s very active outdoors. He goes running all the time and he’s on the beach and he’s always outside playing soccer with the kids, so he was very tan when we had him and his beard was just the perfect color. It just matched perfectly.”

Sparacino sent images to her “two Barometers,” Korine and costume designer Heidi Bivens (Hill’s Mid90s), and received notes to thin out the hair, a process she describes as terrifying. Korine showed her reference pictures and said, “Can you take some weight out of it? Can you thin it down a little bit? Can you make it a little bit more straggly?”

“It’s a nerve-wracking experience because once you take out the hair, you can’t put it back. I think it turned out a little sexier than maybe some of those guys really look because, after all, he’s still Matthew McConaughey,” Sparacino laughs. 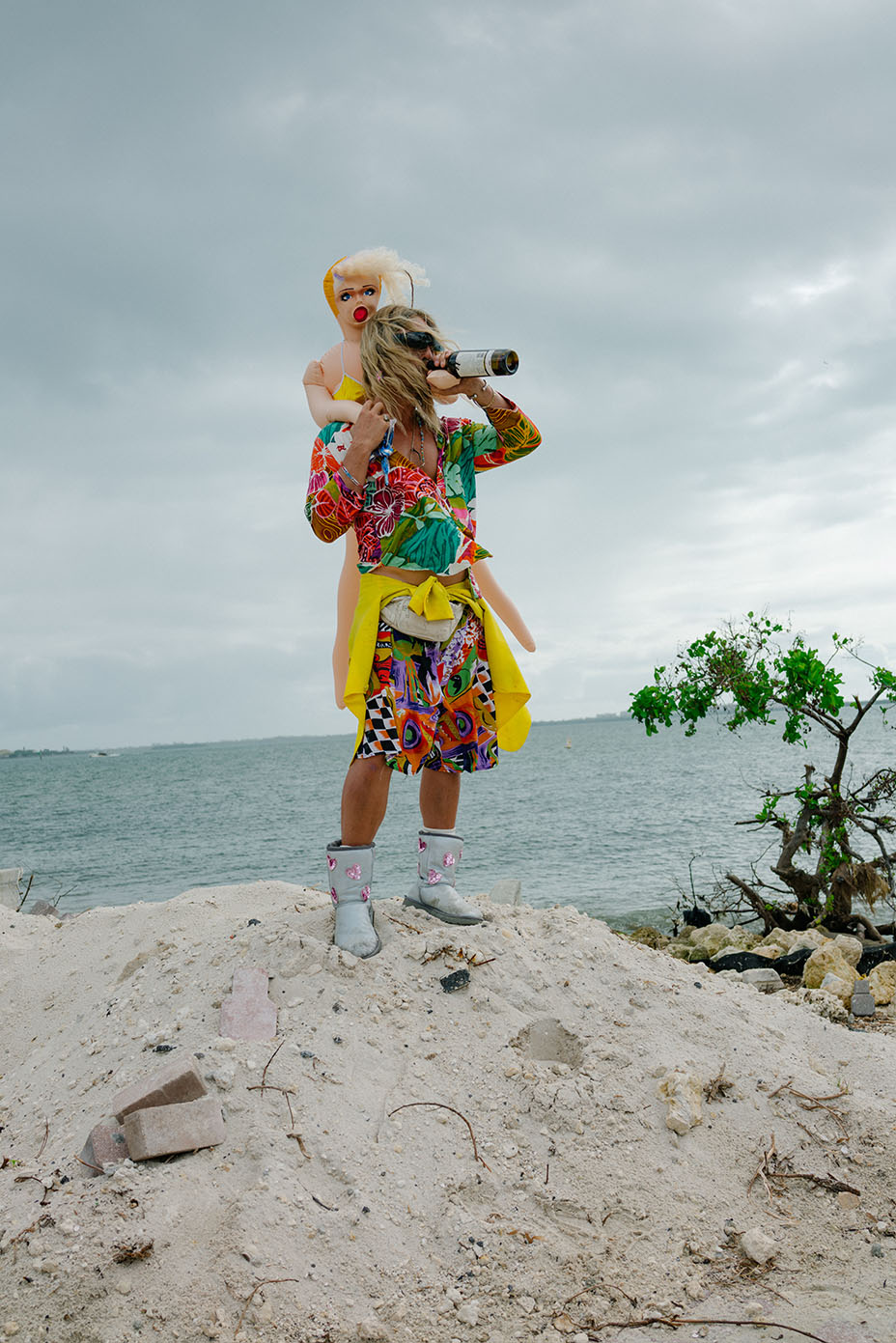 More frightening, however, was the filming of one particular scene during production in fall 2017. Moondog and Flicker (Efron) are making an escape on a boat, but there was no follow boat that Sparacino could ride on — “Usually my eye is always on that prize. I’m never very far from that wig”— so this time, she needed to enlist Efron for help. “I almost had a heart attack when [McConaughey] and Zac took off in that go-fast boat. I handed Zac a handful of pins and said, ‘You’ve got to help me. If this starts to come off, you’ve got to help.’ Potentially that wig could have flown right off of his head. When I saw the scene in the movie, I’m not kidding you, I was cringing.”

She continues, “I said, ‘Sweetheart, you’ve got to help me. When you guys stop, in between, just if it’s coming up, please just pin it back on for me.’ He was like, ‘No problem, G [castmembers call her ‘G-Starr’ or ‘Mama G’], I’ll do that for you.’ He said, ‘It stayed on,’ and he sent me a couple of pictures. It was really funny.”

But when Sparacino returned home after a 15-hour day, the work didn’t stop. “I had to sit and painstakingly comb out all of the tangles for probably an hour,” she says. The stylist washed the wig in her kitchen sink nightly, using the Amika Bust Your Brass Cool Blonde shampoo and conditioner, before letting it dry overnight: “I was crying sometimes at one in the morning, coming home and doing that work. But it has to be done.” She also relied on the “lifesaving” Philip B Rejuvenating Oil to protect McConaughey’s sensitive scalp and sent him home with the Philip B peppermint avocado shampoo and Everyday Beautiful conditioner for care.

The grunt work was worth it when locals didn’t recognize McConaughey. “We would go into these really down-and-dirty bars in Miami and Key West,” Sparacino recalls. “A really great vintage yacht club in Miami, [as in] old from the ’50s, that has never been changed. They knew we were making a movie, but they didn’t know it was Matthew. So I feel like he had a sense of freedom in this character that he may not have had if people knew he was Matthew. … It wouldn’t have looked as good if we hadn’t left his natural hairline out. That’s what really sold it.”

Matthew McConaughey on Filming 'The Beach Bum': "It Was One Long Boozy, Stony Note"