The Beautycon Festival message, “We Welcome All Races, All Genders, All Countries Of Origin, All Sexual Orientations, All Religions, All Glamazons, All Natural Beauties, All Unicorns,” flashed on a screen behind the main stage Saturday, as actress and transgender activist Laverne Cox sat down with fashion expert Joe Zee to tell her personal story and advocate for transgender rights.

“When I grew up in Mobile, Alabama, I never wanted to fit in; I never wanted to be like everybody else,” said Cox, who began dancing in third grade, admitting that she looked to actresses Diahann Carroll and Cicely Tyson and the opera singer Leontyne Price as role models.

“I wanted to be a performer and be on television. People in my hometown made fun of me and I got bullied, but I knew that I was here for something bigger than that. So fitting in didn’t make sense to me. I wanted to stand out because that meant I’d be able to attract people’s attention … I learned a long time ago that I wasn’t going to get anywhere trying to be something I’m not. I’m obviously a trans person. I have a deep voice, wide shoulders, big hands and big feet. I’m not beautiful despite of those things; I’m beautiful because of those things … If you can empower those parts of yourself that people make fun of, no one can touch you.”

While she has been a trailblazer for transgender rights, Cox acknowledged that there is much work to be done in light of President Donald Trump’s directive to ban transgender people from serving in the military and his rollback earlier this year of Obama-era protections for transgender students in public schools, along with state proposals to restrict bathroom use. She supports the LGBT Data Inclusion Act, legislation to include sexual orientation and gender identity data in federal surveys, and encouraged the audience to “write letters, lobby, go to a protest.”

“We’re in survival mode now, because so many basic rights we’ve fought for for a really long time are being threatened,” said Cox. “Trans people are being murdered disproportionately to other populations. I could go on and on. The shift that’s happened in the past few years is that trans people are more visible; because of social media, more of our voices are elevated, so we’re able to talk back in a way that we have not been able to before … But we need more allies coming on board to say these lives matter. I’m an actress, first and foremost. But I want to produce more and be involved behind the scenes in telling these stories, because I believe that so much going on with trans people, in terms of misinformation, has to do with how our stories are told in the media.” 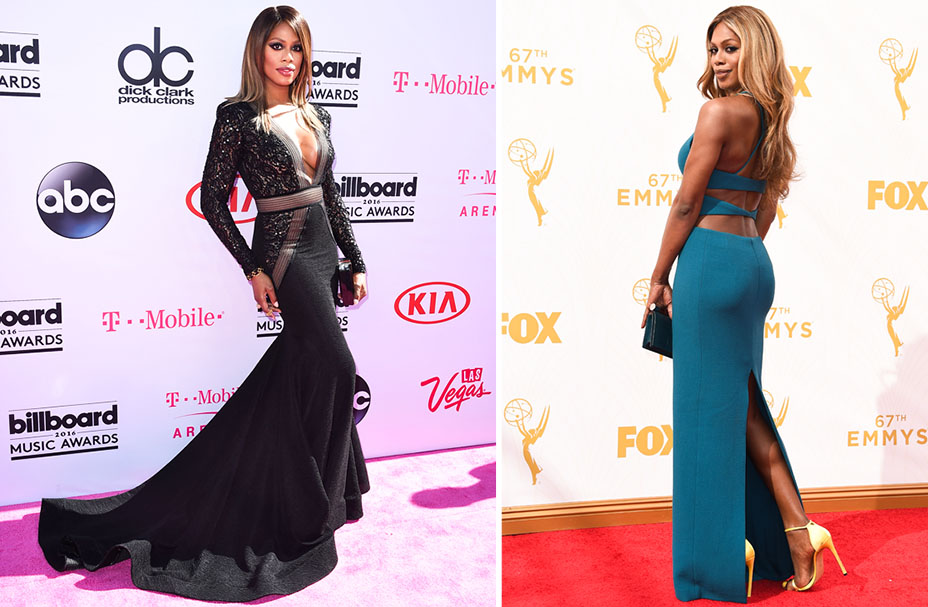 When asked about her favorite beauty moments, the 45-year-old said frankly, “Well, it takes a village for me,” admitting she relies on hair stylist Ursula Stephen, makeup artist Deja Smith and fashion stylist Christina Pacelli. Then she listed, in a snap, the 2016 Billboard Awards (where she donned a plunging Michael Costello mermaid dress with sleek hair, a smoky eye and berry lips) and the 2015 Emmy Awards (where she wowed in a teal halter-neck gown by Francisco Costa for Calvin Klein Collection, with bright yellow sandals and matching nail polish, her hair in loose waves).

“Sometimes when I wake up and look into the eyes of the person I love, and I don’t have any makeup on, that’s a beauty moment, too, because it’s about connecting to someone who loves me and cares about me and it’s not about makeup or how I look,” said Cox, as the audience awwed.