New York Fashion Week wasn’t supposed to kick off until today, but you wouldn’t know it from the jam-packed schedule Wednesday evening. Among splashy events like Tom Ford’s ode to L.A. excess and Bergdorf Goodman’s private dinner to celebrate the store’s debut of Gucci Décor, two iconic jewelry houses chose the same night to launch their latest fragrances.

Bulgari and Tiffany & Co. are each making new statements in scent this season, and in a democratic fashion that was mere coincidence, planned parties that managed to not conflict with each other. Tiffany & Co. took the early shift, hosting a cocktail-hour event at Highline Stages to introduce the jewelry house’s eponymous scent ($100 for 1.7 oz bottle), a sparkly floral with iris at its heart. “The iris is a motif that we brought from the Tiffany archives; it’s part of our history, so it was an ideal element to feature and interpret in a new way,” explained Ashley Barrett, vice president of global public relations for Tiffany & Co. 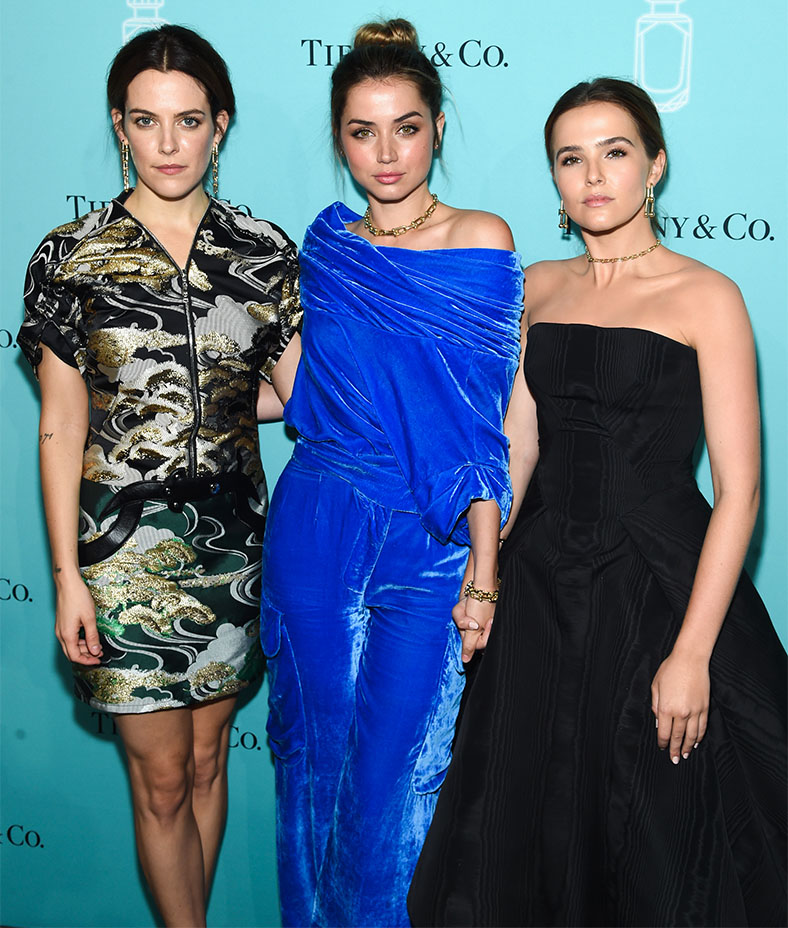 Riley Keough, Zoey Deutch, Doutzen Kroes and Ana de Armas (soon to be seen in Blade Runner 2049) were among those who explored the scent bar and had portraits taken in an oversized frame in the shape of the eau de parfum’s bottle, which takes its cue from two proprietary diamond cuts, the Tiffany diamond and the Lucida. The event was capped with an appearance by St. Vincent, who kicked off her mini-concert with her rendition of The Beatles’ “All You Need is Love,” which she also performs in the fragrance’s campaign. “We love her treatment of the song, which is a perfect anthem and antidote for the world right now,” Barrett said. “She’s not only a friend of the house, she’s also a true artist. We love what she brings to this very modern moment for Tiffany.” 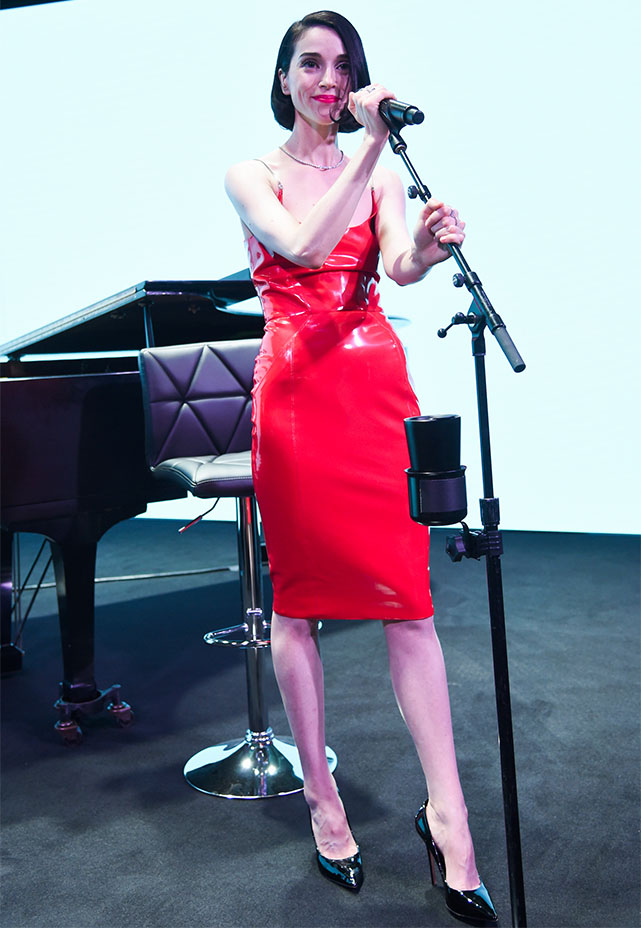 St. Vincent wrapped her set in plenty of time for everyone to sprint uptown to Tom Ford’s show at the Park Avenue Armory, and from there it was out to DUMBO, where Bulgari chose the 1 Hotel Brooklyn Bridge to unveil its newest scent — an earthy floral dubbed Goldea, The Roman Night ($95 for 1.7 oz bottle) — and introduce the face of the campaign, Bella Hadid.

“In the campaign you see Bella on a rooftop in Rome overlooking the Spanish Steps, one of that city’s most iconic locations,” noted Daniel Paltridge, president of Bulgari North America. “Bulgari and the Spanish Steps go back a long way, because that part of Rome is where you’ll find Bulgari’s very first location. So we thought, How do we create that same essence in New York? You couldn’t ask for better than this spot in Brooklyn: It’s a cool, interesting place with a panoramic backdrop of downtown Manhattan, another really iconic city.”

Why Bella Hadid for the campaign? “For many reasons — she’s young, she’s vibrant, she’s energetic and beautiful,” Paltridge said. “And she’s also a really perfect fit with what we wanted to say with Goldea, which is meant to evoke a cooler, younger feel, and a party scene that would appeal to millennials. It’s easy to picture Bella on a night out in Rome with her friends.” 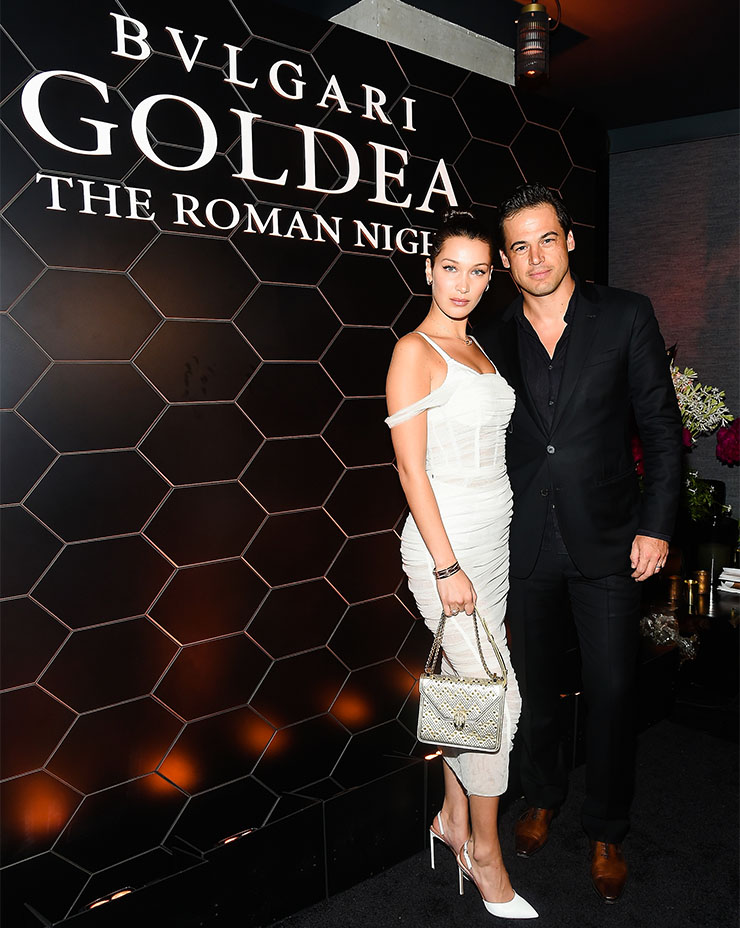 Not unlike the diamond inspiration of the Tiffany & Co. bottle, Goldea, The Roman Night likewise is influenced by a gemstone cut, in this case the sensuous cabochons that have become a Bulgari signature. The floral scent — the third iteration in the Goldea family — is a deep, decidedly exotic addition to the family, with notes of jasmine, tuberose and black peony on top of black musk and patchouli.

With DJs Justine Skye, Lara Gerin and Majorr Smith providing the music against the backdrop of a dramatic skyline, Hannah Bronfman, Caroline Vreeland, Daphne Groeneveld and Gala Gonzalez were among those who eagerly waited — and waited — the arrival of Hadid, who turned up on the red carpet just after 11 p.m.; Paltridge said that was by design, as well. “Doing an event like this on the unofficial first night of New York Fashion Week, the idea was a late-night party everyone could enjoy after a busy day,” Paltridge said. “Having Bella here with her friends ties all of that together really well.” 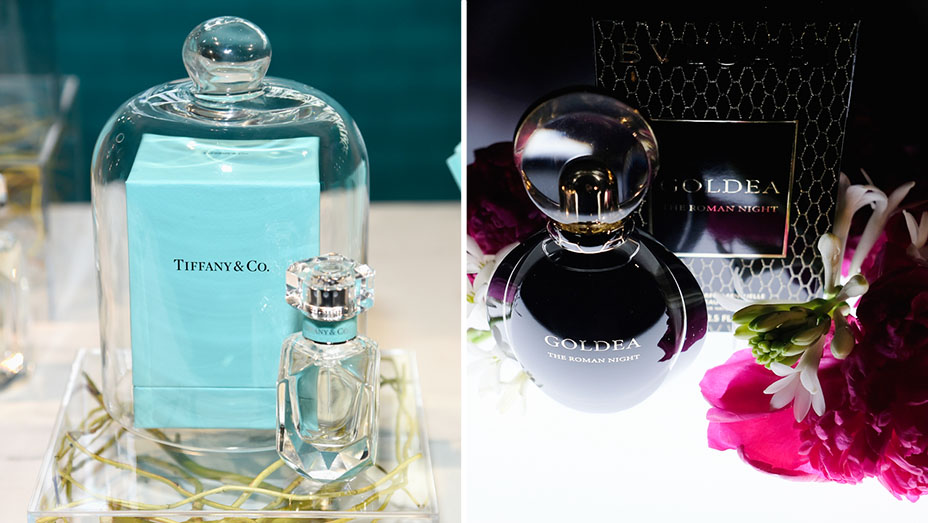