Manhattan’s fabled Bergdorf Goodman, where a young Barbra Streisand once frolicked on the main floor in her first television special in the ‘60s, kicked off another blockbuster Tuesday evening with the unveiling of its 2017 holiday windows and a salute to a bevy of the city’s defining cultural institutions.

Everything You Need to Know About "Thighlighting," Hollywood's Newest Plastic Surgery Trend

Celebrating on that same first floor, Bergdorf’s women’s fashion director Linda Fargo, aglow in silver sparkles, made an effective ringmaster of sorts for a style-aware crowd that included red carpet designer favorites Naeem Khan and jeweler Lorraine Schwartz, author and New York Fashion Week creator Fern Mallis and Vogue’s Lynn Yaegar, who’s known for her eccentric getups and did not disappoint in a be-furred and rose-strewn Comme des Garcons bubble coat and her signature moue lipstick. More prosaic popular culture notables in attendance included literary super-agent Linda Janklow as well as Empire actor Jeremy Carver. Outside, a swelling crowd of passersby was being served hot chocolate from the store in paper cups on trays as they took in the displays.

“We want the windows to be memorable. We want to induce a kind of aesthetic delirium,” says David Hoey, BG senior director of visual presentation, a few days before while relating that planning and executing the windows is an 11-month affair. “We only take January off. We’re in production, making things, by the spring.” 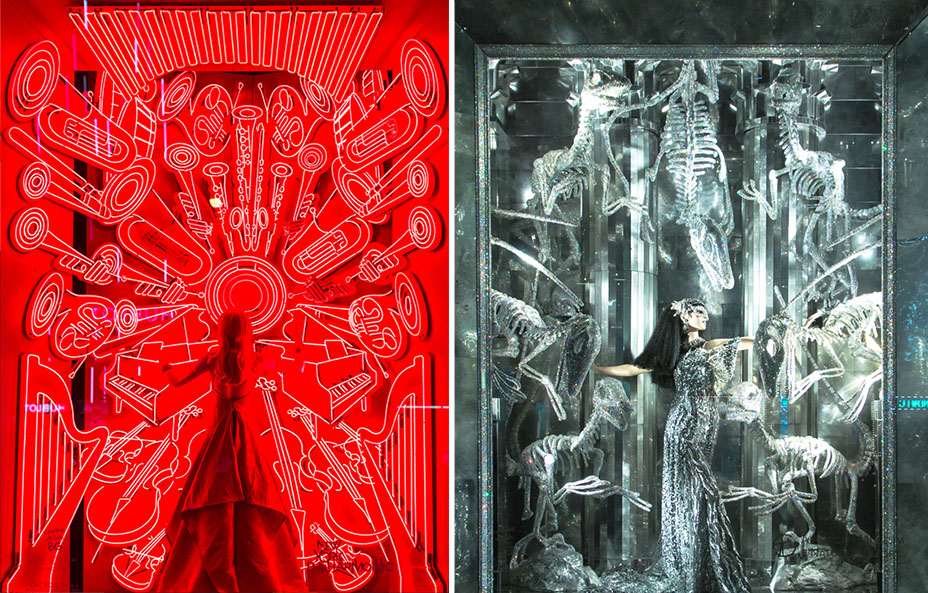 Of course, Bergdorf’s being Bergdorf’s, fashion also takes center stage. In one window, a pulsating tour de force of red neon musical “instruments” to toast the New York Philharmonic also puts the spotlight on a custom Zac Posen scarlet gown, while another tableau re-creates the landmark lobby columns and attendant dinosaurs familiar to generations of school tours at the Museum of Natural History, completely encrusted in an eye-popping million-and-a-half rhinestones that complement an equally spangled diva in the young American in London designer Halpern. “Each of those Velociraptor skeletons took about 325 hours to bejewel,” notes Hoey.

The store is also offering swanky special experiences at each of the institutions, ranging from a guided visit and chef’s post-tour private lunch at the New-York Historical Society’s “Hotbed” exhibit charting the rise of women’s suffrage (with the Meryl Streep-narrated film We Rise with original music by Alicia Keys; tour $1,500, up to five guests) to a kid’s birthday party at the Museum of the Moving Image to take in the multimedia Jim Henson Exhibition, along with puppet making, face painting and a custom birthday cake ($5,000 for up to 10 children.)

For those who want a nice little souvenir of their experience, or live too far to visit, Bergdorf’s is also offering exclusive giftable mementos and designer apparel, ranging from a Muppet-faced hoodie from this year’s must-have line Kith ($48-$160, for children, men and women) to creatures made of real gems in a special jewelry collection that includes a dragonfly ring from Schwartz. (Various designers, $15,200 to $100,000.) And a percentage from each purchase or experience sold will go to the corresponding partner institution throughout the holiday season.

But it all comes back to the holiday windows themselves, be it a fantastical take on a botanist’s library via handmade fabric artistry to celebrate the New York Botanical Garden or signature glass objects on display from Urban Glass in Brooklyn.

“We do tend to overload the windows on purpose, with too much information, too many things to take in,” says Hoey. “We want everyone to remember having a varied experience and pick their favorite.”