Beyonce made her first official red-carpet appearance post-pregnancy on Tuesday night in New York City, stepping out in a curve-hugging emerald green gown that the Bey Hive obsessed over on Instagram. Even Khloe Kardashian commented on one of the photos, “Oh my gorgeousness!!!!!”

The jaw-dropping custom dress was created by Los Angeles-based designer Walter Mendez in collaboration with Beyonce’s stylist, Zerina Akers, who reached out to him a few weeks ago.

“As a designer, when you’re thinking about top celebrities you want to dress, she’s up on there,” Mendez tells The Hollywood Reporter over the phone on Wednesday morning. Knowing that Beyonce would be making her first appearance on the step-and-repeat since giving birth to twins Sir and Rumi, Mendez says he wanted to “design something that would be flattering and something that would complement her skin. … Immediately we thought of emerald.” 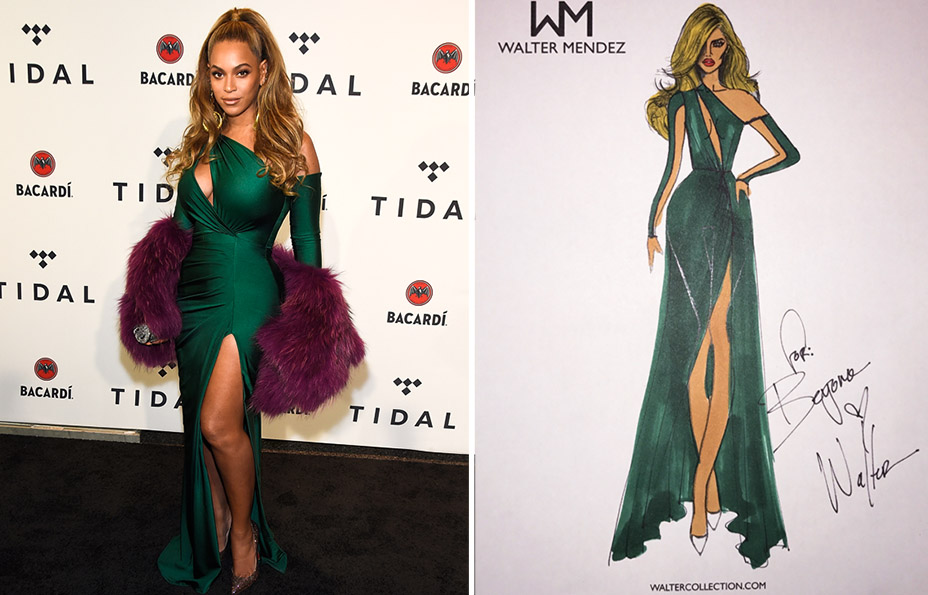 The designer wanted to accentuate her post-baby body with an asymmetrical style and thigh-high slit (“She has great legs,” he says), adding that “there’s a sheer panel that goes down the sleeves, which gives it a touch of modern design with a twist of a classic Grecian-inspired goddess dress.”

Since Bey posted several photos to her Instagram account, the reaction has been “insane,” says Mendez. “Anybody who has my number is calling or texting me.” His birthday also happened to be on the same day that Bey wore his masterpiece. “My joke that I keep telling is that she literally redefined my B’Day,” he says, laughing.

Mendez is no stranger to the Hollywood scene; he has designed for Ciara, Britney Spears and Jennifer Lopez, who wears one of his catsuit creations during her “All I Have” residency show.

Mendez founded his Walter Collection label in Los Angeles in 2009 and has shown at L.A. Fashion Week in the past. “Having a brand in L.A. is essential because besides New York, I feel L.A. is the next hub of trendsetters. L.A. is where we have Hollywood,” says the Manhattan Beach-raised Mendez. “To have a red-carpet brand in the nucleus of all red carpets is essential to me.”