At Sunday’s BAFTA Awards, best supporting actress nominee Allison Janney continued her winning streak of getting creative with the all-black Time’s Up dress code. Similar to her black-and-white Golden Globes Mario Dice look with intricate cut-out detailing, Janney’s BAFTAs gown was two-tone, but this time out she (via stylist Tara Swennen) went for a design by New York-based fashion designer Bibhu Mohapatra, who hails from India.

“Allison has been very devoted to supporting the Time’s Up movement, so I was thrilled to find such a uniquely high-fashion black gown for the event!” says Swennen, noting that Janney’s earrings and ring are by Parisian jewelry brand Messika, selected so as not to overwhelm the neckline. “We loved the dramatic sleeves and sheer elegance of the look! Bibhu and I have been friends for years, but this is our first big moment together.” 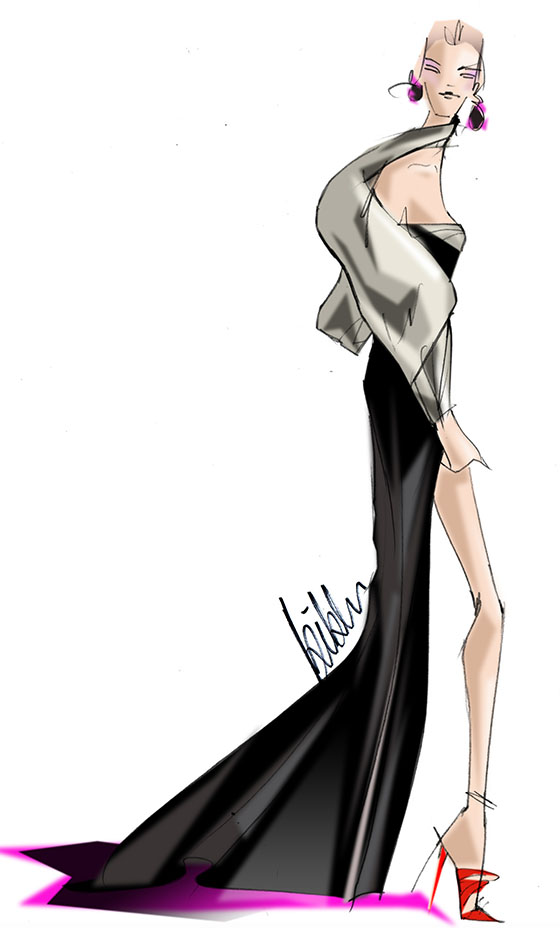 Straight off the fall-winter 2018 runway at New York Fashion Week, Janney’s silk velvet column gown has a contrasting ivory cutaway top and sleeves with a sage tint, crafted of a silk barathea fabric from Como, Italy, according to the designer, who spoke exclusively with The Hollywood Reporter. There is a high back slit, and Mohapatra notes that the velvet has a bit of stretch and is fully lined in heavy stretch silk “so it’s soft and holds you in beautifully.”

He explained that the velvet is cut with the nap up for the darkest, purest tone “with zero reflection, so you can put the brightest light on it and it still stays a very matte deep black.” And the silk top and sleeves are “backed with layers of organza to create all the drape that goes from the neck and around the arm, creating this architectural volume.” 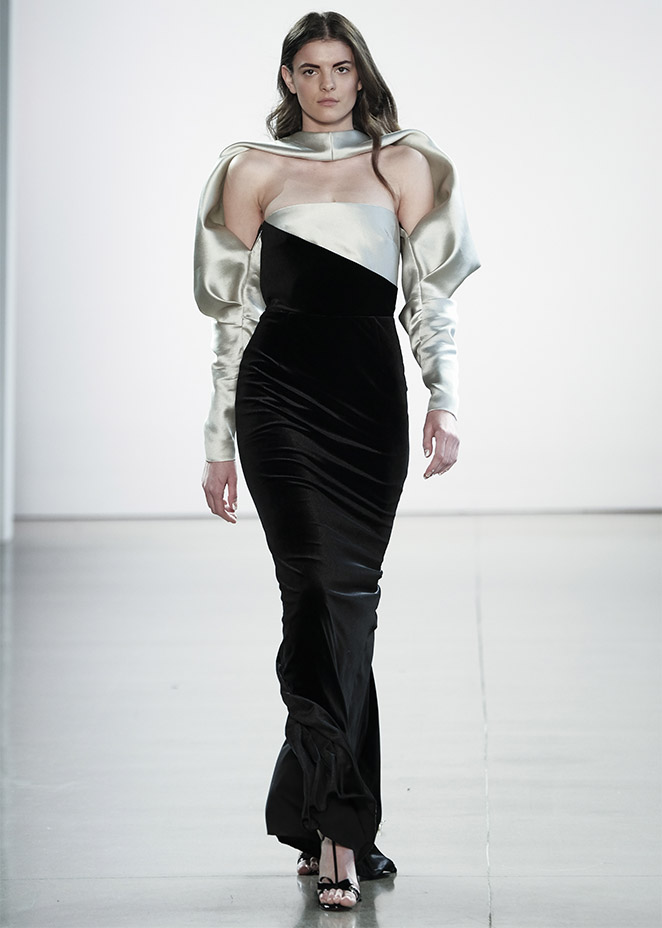 Mohapatra continues: “It shows the entire shoulder, so it really enhances one of the most beautiful parts of the female body, the collarbone and clavicle, and Allison has a beautiful figure, so it just worked beautifully on her. I have always adored Allison’s work. She can be funny, she can be serious. She’s just brilliant. And she always looks great. I’ve always wished to dress her. I was watching the Golden Globes when she won and texted Tara: ‘We need to have a Bibhu moment, and I’ll die and go to heaven when it happens!’ This dress was pinned on the house model, and I kept sending pictures to Tara; then we sent some sketches and then the dress for Allison to try on. The sample was a near-perfect fit, so we just tweaked certain areas to fit properly but we didn’t change the design.”

The same gown, identical to the one donned by the actress, will be available for sale for about $3,900-$4,400 at bibhu.com by the end of next month, says the designer. So you, too, can have an Allison Janney-esque red-carpet moment.

“I’m shaped by the women in my life — my mother taught me how to sew when I was 14 years old in India,” says Mohapatra on the Time’s Up and #MeToo movements. “Can you imagine a traditional Indian mother teaching her son how to sew? I’m blessed. The moment we’re going through right now, politically and culturally, extends beyond this country to everywhere. The culture I come from is still eons behind, as far as women’s rights are concerned. So it’s never been this important for me to contribute my voice. With my work, I hope to stand shoulder to shoulder with people who are already making an effort to stand up against inequality and injustice and violence against women. I hope it will be perceived that way. To me this gown speaks strength and confidence. It strikes a simple note, but it’s very clear. I can’t wait to see Allison in it, exuding that power!”

Mohapatra says that dressing Michelle Obama in 2015 was one of the most gratifying moments of his career. “I felt like here is an immigrant’s American dream coming true, and she made that happen,” he says. “Now we’re fighting for hundreds of thousands of dreamers who have come here with a dream like mine, trying to make a better life and support their families. I want to talk to as many people as I can to tell them not to give up. It is true that if you come to this country, your dreams can come true if you work hard. Unfortunately, we’re in a moment that is a challenging time.”

As for who Mohapatra aspires to dress: “Meryl [Streep]!” he says. “I’m madly in love with her. I mean, who is not? She’s the one who inspires me. I can say that I’m supposed to put some sketches together for her stylist, Micaela [Erlanger], who is a dear friend of mind. Not necessarily for a specific event.”

Stay tuned for the Oscars.