Continue to The Hollywood Reporter SKIP AD
You will be redirected back to your article in seconds
Skip to main content
January 28, 2021 10:20am

To say goodbye to The Standard Hotel, a Sunset Strip icon since 1998, is to say goodbye to an era — in Los Angeles, and in my life. I got to know The Standard intimately, while lounging inside its infamous, voyeuristic art installation, The Box. Once a week, I’d slip into white boy shorts and a tank top, and crawl inside a large, glass display case behind the concierge desk. For seven hours at a time, I was the art installation.

Being a Box Girl was one of many ridiculous freelance gigs during my 20s. I was your stereotypical “L.A. slash”: a writer/actor/waitress/nanny/extra, and etc. Box Girl was the easiest slash, because it required absolutely no skill. Inside, I could do whatever I wanted — read, write, talk on my phone (something we still did in the mid-2000s), use my computer, even sleep. The only thing I wasn’t allowed to do was make eye contact with anyone outside The Box. It was supposed to seem like this mysterious creature had absolutely no idea anyone was out there, looking.

People in the lobby assumed I couldn’t hear them. Perhaps it’s from watching too many true crime TV shows, but there is something about a glassed-in room that makes people assume it’s soundproof. It’s not. I could hear the drunk duo slurring, “How much for a room?” and the bros debating between The Sky Bar or the strip club. Most interestingly, I could hear any and all commentary about “that girl in the box.” Me. I heard the funny: guys placing bets on what time I would fall asleep. “I’ve got the over on 15 minutes,” one would say, pointing a Peroni at me. I heard the charming: the guy yelling, “Hellooooooo!” while waving his hands like he was stuck in a riptide, not knowing I wasn’t allowed to look. And I also heard the horrifying: the man who thought it was like the Red Light District in Amsterdam. Who thought I was for sale. His accent haunted me for weeks, “How much for an hour?”

For the most part, it was harmless. “Can they go to the bathroom?” was a common refrain. (Yes.) My favorite was the question I’d hear if I was lying very still: “Is she real?” This always made me happy because mannequins don’t have cellulite.

During the day, the scene in the lobby rarely changed. But by dusk, as the smell of chlorine surrendered to cigarettes, the set began to transform. The deejay would start, and soon I’d be surrounded by a sea of skinny jeans and asymmetrical haircuts, nodding along nonchalantly. 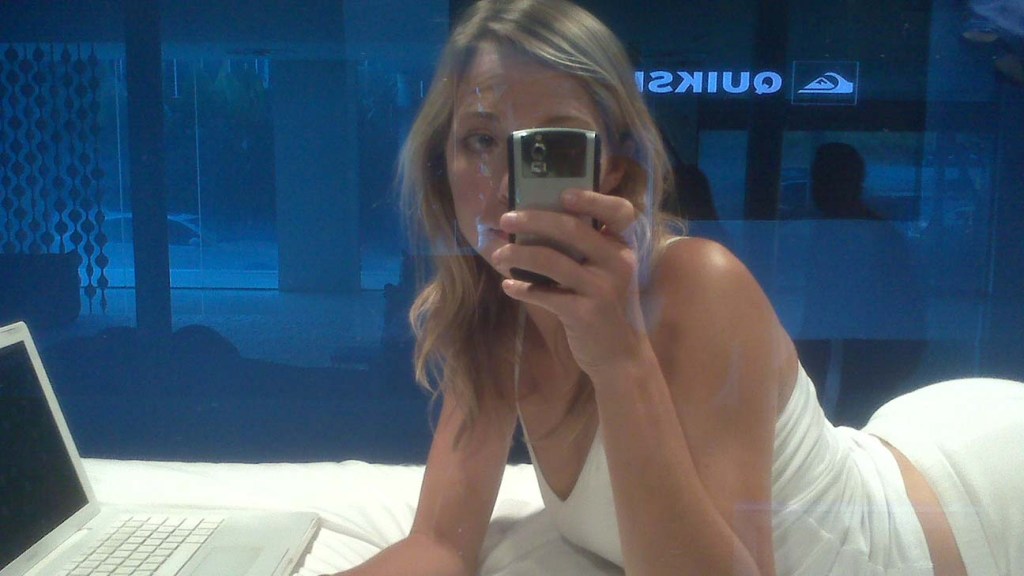 Beyond the lobby’s sliding-glass doors was a Los Angeles that, because of social media, no longer exists. It was an era I revere with great nostalgia. There is a dearth of pictures of me in The Box because iPhones weren’t invented yet. This was before the advent of the “selfie,” back when taking pictures of yourself was still something to be embarrassed about. It was a pre-Instagram world — nothing but flip-phones and T-9 and Blackberry messenger. You didn’t know what everyone was doing, all the time. There was something romantic, almost cinematic, about it. You had to actually go to the bar to see if your crush was there.

As a writer, The Box was a gift. Like Gloria Steinem becoming a Playboy Bunny so she could write about it. I, too, was smart enough to be dangerous. (It’s hard not to wonder what Steinem would think of the literal, though I don’t think intentional, metaphor of a woman trapped below a glass ceiling.)

I wondered, too. Is this valid? Being an object for others to ogle? But, I’d remind myself, I was using The Box as much as it was using me — ultimately writing a book about it. They were watching me, but I was watching them, too.

It’s no secret The Standard struggled in its latter years, being sidestepped for hotels shinier, more relevant. But that’s what was so loveable about it. Throughout the years, The Standard remained solidly itself. A place, and a period in my life, that seems frozen in time — a good time.

Lilibet Snellings is the author of BOX GIRL: My Part-Time Job as an Art Installation, and is currently at work on a second book.