Fashion designer Gabriela Hearst may not be a household name just yet, but she is well on her way, thanks to her knack for making what women want to wear in Hollywood and out, in public life and private.

Hearst launched her namesake line just three years ago in New York, but has already become a favorite with stars and stylists for political events (Lena Dunham at the 2016 Democratic National Convention) press tours (Laura Dern for Star Wars) and, yes, even the Oscars red carpet (Black Panther’s Danai Gurira). Like other influential female designers Phoebe Philo and Stella McCartney, Hearst is appreciated for her grown-up, fiercely feminine but abidingly practical aesthetic, and her value of environmental sustainability, inspired in part by time spent growing up on her family’s sheep farm in Uruguay.

She first made headlines in 2016 with her sculptural, retro-style “Nina” handbags, which she cleverly launched in a limited edition of 25, gifting them to women who inspired her including Brie Larson, who was photographed with the arm candy just two days before winning the best actress Oscar for Room.

But 2018 is turning out to be a banner year, too. She was just nominated for a Council of Fashion Designers of America award in the best women’s designer category alongside such seasoned vets as Marc Jacobs and Raf Simons. This honor follows a positive awards season, during which she dressed Dern for the Vanity Fair party, Gal Gadot, Nicole Kidman, Gabrielle Union and more for events before that. 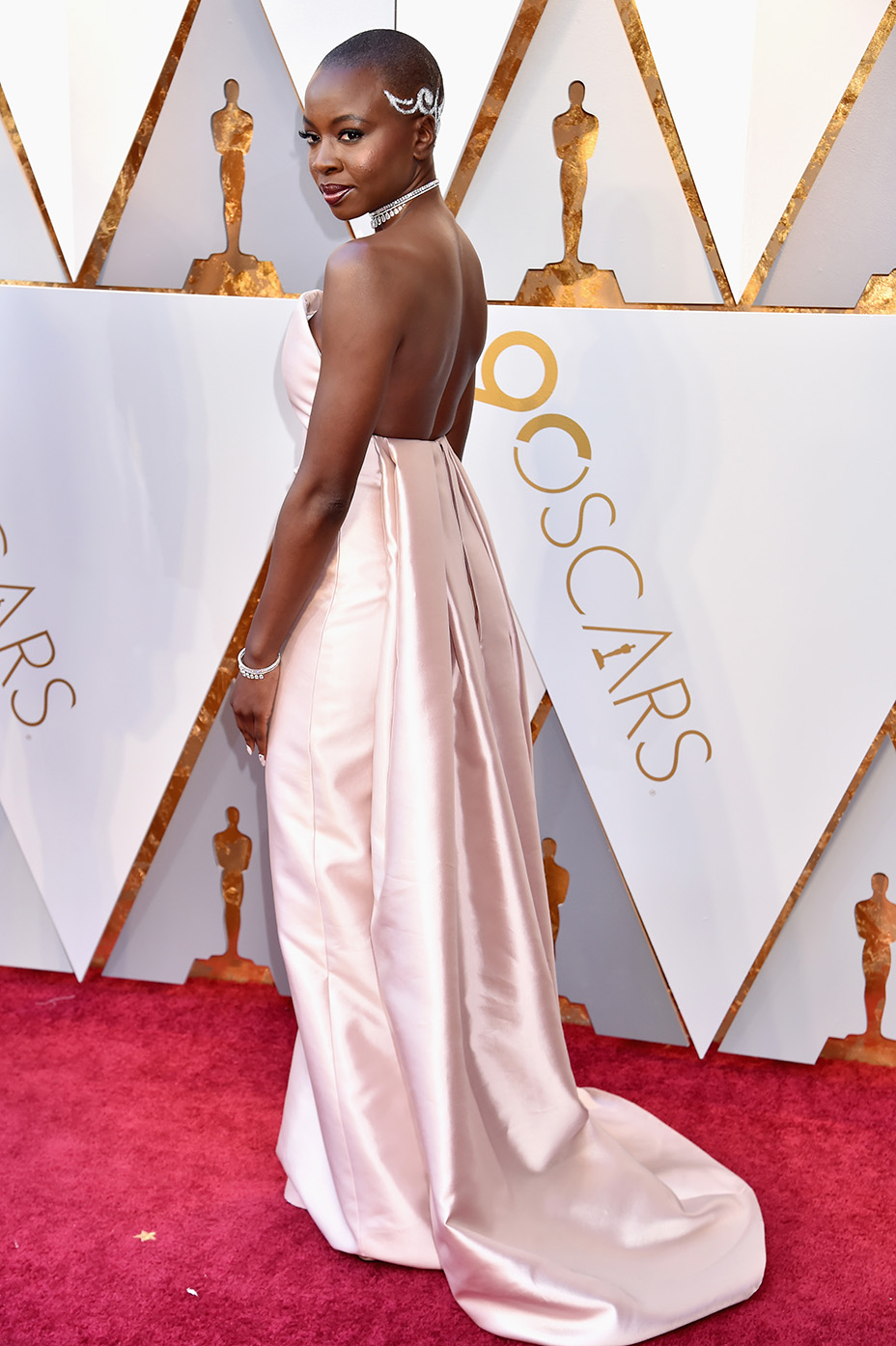 Hearst was visiting L.A. from New York recently to show her fall 2018 collection at the Chateau Marmont, and we sat down to chat about everything from the timelessness of pirate boots to the Hollywood muses behind her clothing and accessories, which are for sale at Bergdorf Goodman, Net-a-Porter, Matches.com and more.

Congrats on your big CFDA nomination!

We’re really humbled by it, it was so unexpected, and it’s exciting when you see your name next to the big guys. I found out at the therapist.…I answered the phone and was like, “I really do have to take this!” 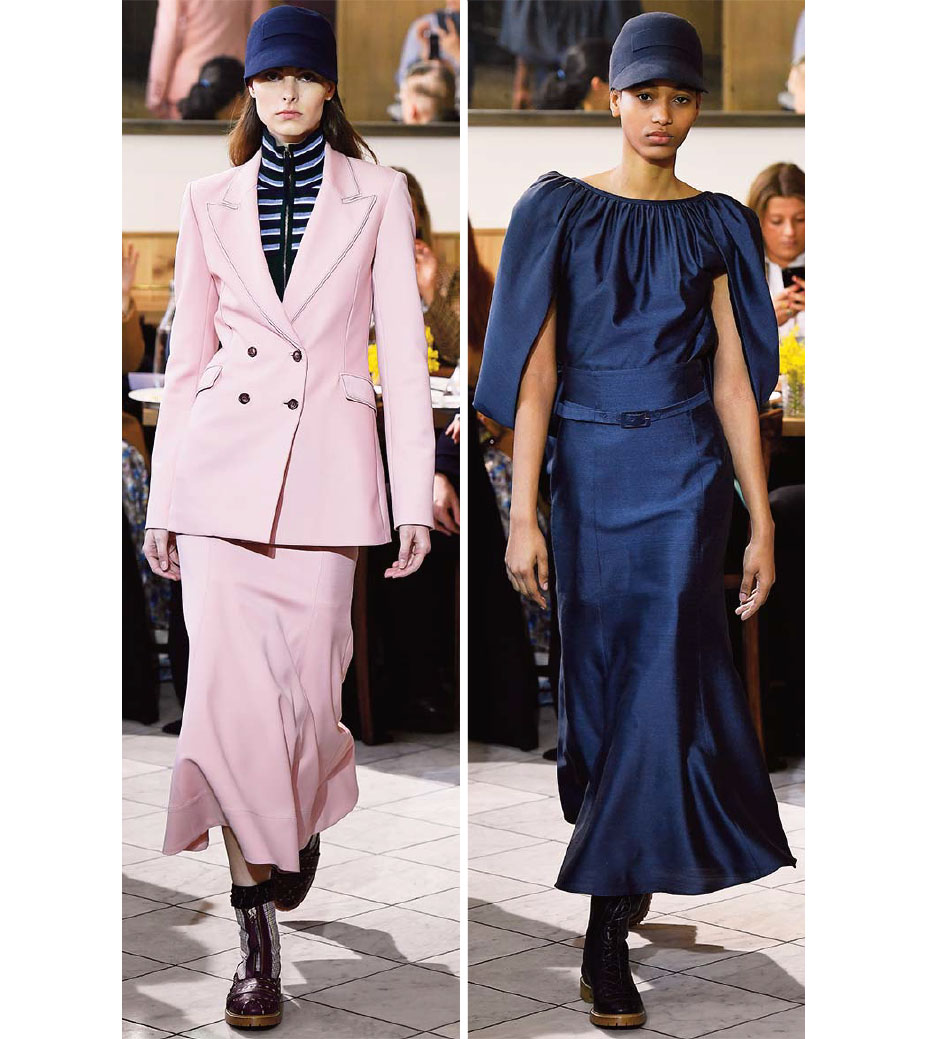 What’s the inspiration for the fall 2018 collection?

The whole collection was based on the idea of women in the workforce, even including female Victorian-era coal miners, who were quite scandalous because they worked topless with the men underground because it was so hot. I tried to think of all things women may have to do, because I want them to be comfortable and ready. 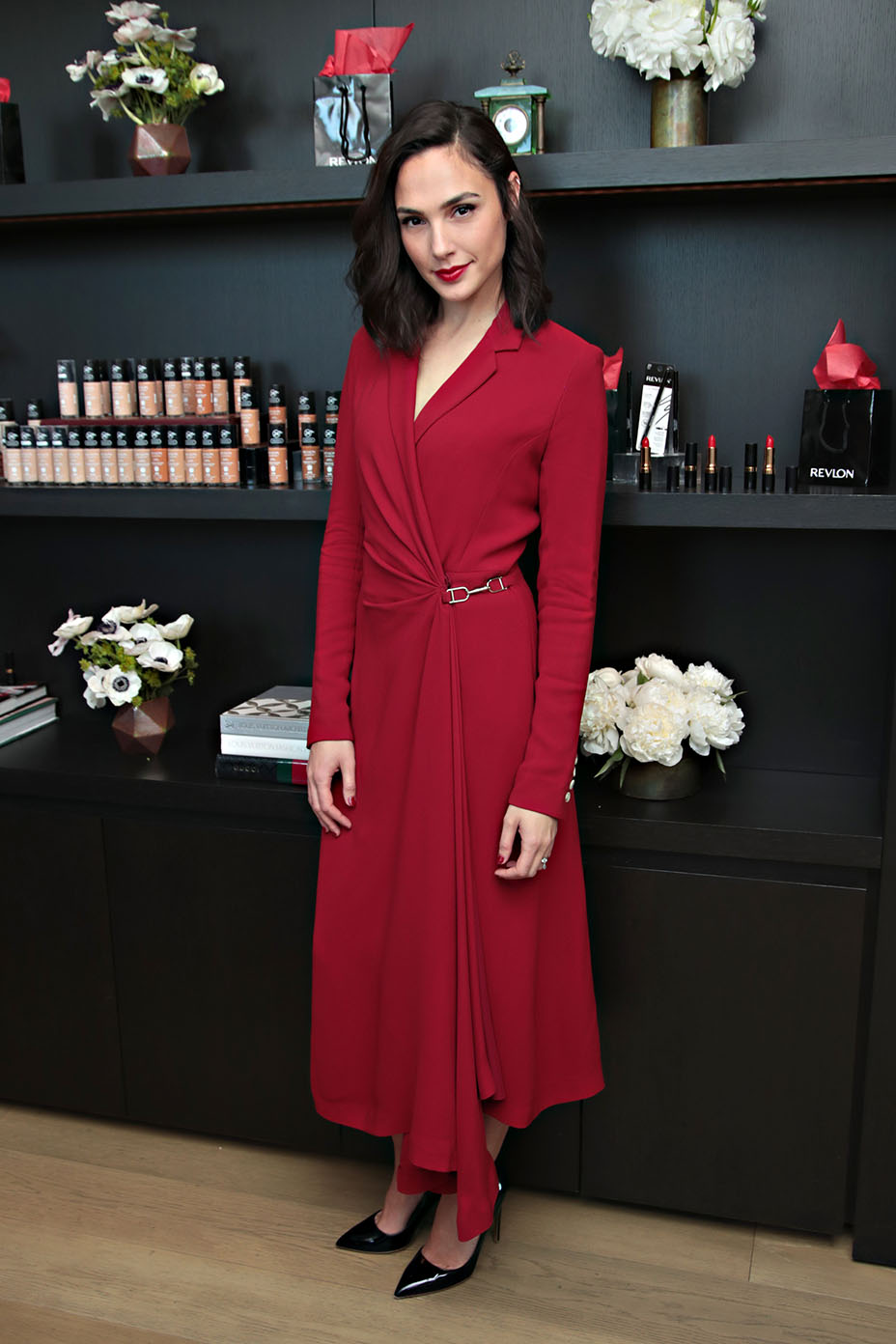 I love the jersey dresses with the pintuck details and the low heels with stones embedded in them. You even have a chic utility belt!

I’m into doing timeless things. I want my pieces to be relevant 10 years from now. This dress uses a news print fabric inspired by my husband’s family’s papers [her husband is William Randolph Hearst’s son, businessman Austin Hearst]. We used snippets of news articles along with red splotches of ink like blood because of the big debate about print being dead. Another version has yellow roses instead of ink. There’s a black houndstooth coat but knitted in cashmere. All of our knitting is done by a women’s nonprofit in Uruguay.

Your collection is nontraditional in the sense that it doesn’t change so dramatically every season. Do you feel you are trying to work against the fashion system?

I used to have this brand Candela that I showed in 2003 in L.A., which I started with three partners and $700. It was very bohemian, but even then I was designing things that were atemporal. I never followed trends. I’m fascinated by the concept of timeless design. It doesn’t have to be boring, it can be radical – think of the Vivienne Westwood pirate boots from 1976, 42 years ago, which were probably based on [a design] from the 1800s. If you are going to invest $5,000 in a cashmere coat, I want you to have it forever. I try to achieve that in every piece. 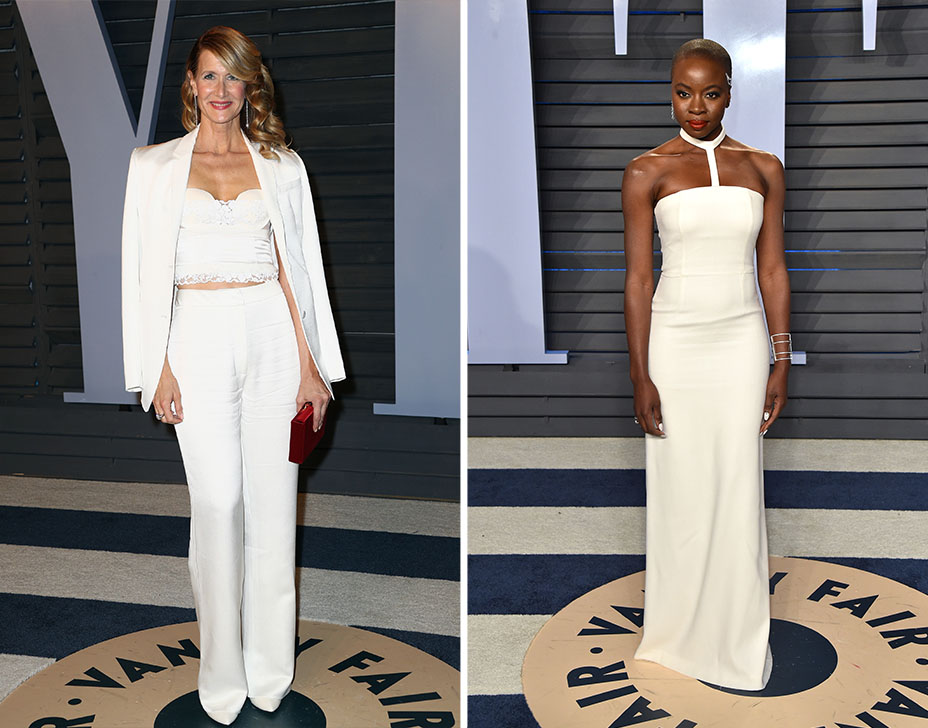 Who in Hollywood has been supportive of your brand from the beginning?

Brie Larson was one of the first to wear my bag, two days before she won the Oscar. One of the women on my mood board is Gillian Anderson from the BBC series The Fall. I don’t get to meet everyone I dress, because at the end of the day, we provide a service, but I did get to meet her through work. It was great because we had chemistry. I don’t think people realize how sexy she is — and smart — and it’s a winning combination. Rebecca Hall and Laura Dern are also some of the great women we’ve been lucky to dress. It starts with conversations with their stylists, then they come directly to us. When Laura was in New York, she came to our showroom.

My Off the Chart Talented Gorgeous Date @lauradern #metkawakubo #metgala

I pay attention to the psychology of women. Most like to show their shoulders, no matter what age, and want something soft next to their skin. It’s not just how beautiful you look, it’s how good you feel. I want to be like, “Don’t worry, I’ve got you covered.”

That’s what I wish Hollywood actresses had done at the Oscars, for the final Time’s Up red carpet fashion statement — all worn female designers!

There’s not that many of us. 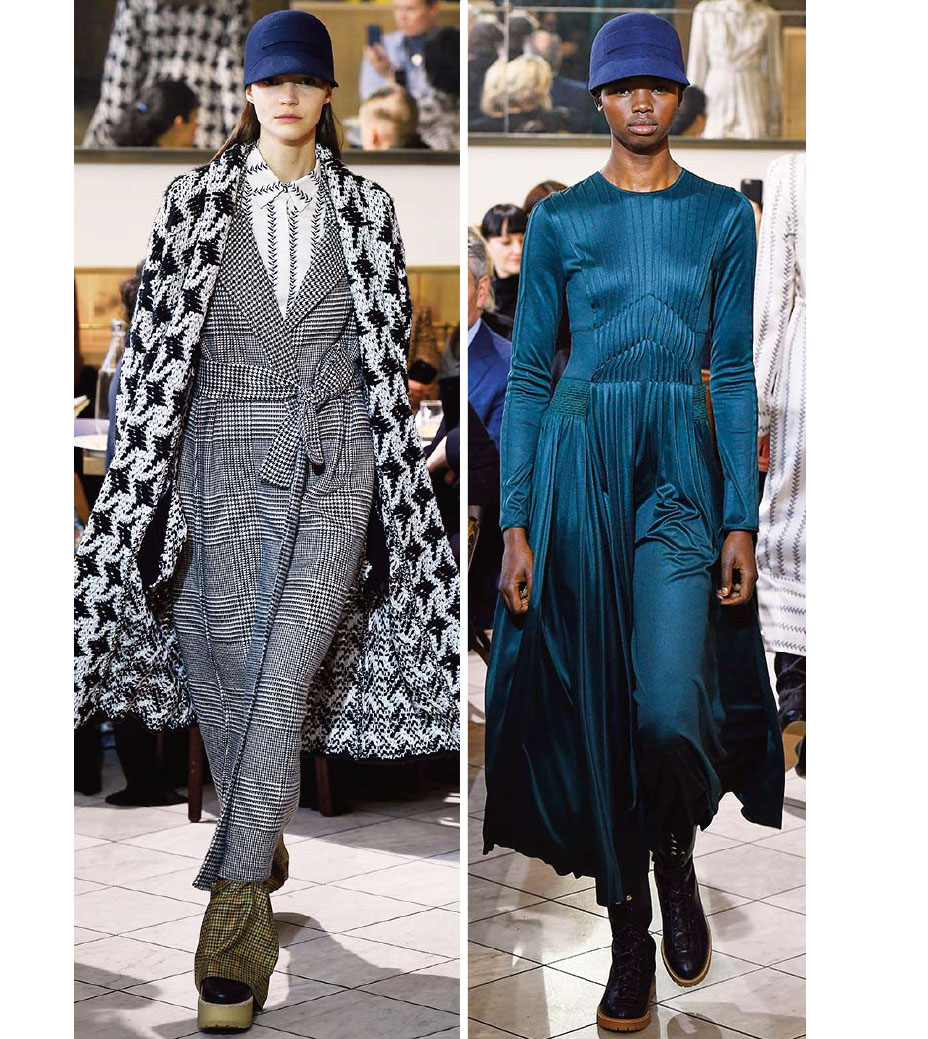 How does the West Coast influence your sensibility?

Because I grew up in Uruguay, South America, close to nature, I connect to L.A.’s laid-back attitude. This was actually Spanish territory, close to my culture in a way. That feels common. In New York, you’re always run, run, run, run.

You have three kids. How do you balance that with running your own company?

It’s challenging but I think I’m more organized and productive because of my family. And it makes me think about the women I’m dressing who also have kids. You have to consider practicality. You can be practical and look great doing it.