Given the fascination with the backsides of Cardi B and Kim Kardashian West, we’re relieved to say there’s a much less intrusive alternative to butt injections and implants. In two words: sheet masks.

We thought we had seen every form of sheet mask sweep the country as part of the K-beauty craze — look no further than the Insta posts of Cindy Crawford, Jessica Chastain, Drew Barrymore, Bella Hadid, even Jimmy Fallon and James Franco. Facial masks were even the most-Googled skin-care trend of 2017.

Possibly the biggest breakthrough were dry sheet masks (as in non wet-and-goopy) formulated for the face, neck, bust, butt and beyond by Montreal-based skin-care guru Nannette de Gaspe. Even the qQueen of England, Katie Holmes and Steven Tyler supposedly have their hands (or face) on them.

Get the perky posterior you’ve dreamed of. Our Uplift Revealed Tush features a soft and luxurious dry-printed techstile that helps re-shape the contours of the buttocks area while restoring firmness, suppleness and bounce for a visually more sculpted tush. #NannettedeGaspe #UpliftRevealed

While working in private equity, de Gaspe stumbled into her role as skin-care entrepreneur when friend Debra Margles (president of Michael Kors Canada) called her to recommend an investment opportunity with Canadian company Biomod Concept, where Karine Theberge had developed a deeply penetrating proprietary skin-care formulation and the technology of that could dry-print it onto textiles.

Formulations are activated by body temperature and light massage. The first five Nannette de Gaspe masks ($75 to $105), launched in 2016, are aimed at hydrating and brightening the face, eyes, mouth, neck and hands; last March, the brand added two novel masks ($175 a pop) intended to plump and lift the decolletage and derriere. An accompanying anti-aging Art of Noir skin-care line ($40 to $295, including cleanser, toner, exfoliator, cleansing cloths, moisturizer, lip balm and micro-needling roller) is available now for preorder at Barneys New York, delivering April 30.

De Gaspe sat down with THR at the Beverly Hills Hotel to talk about her celeb fans and how she disrupted the facial mask sector. 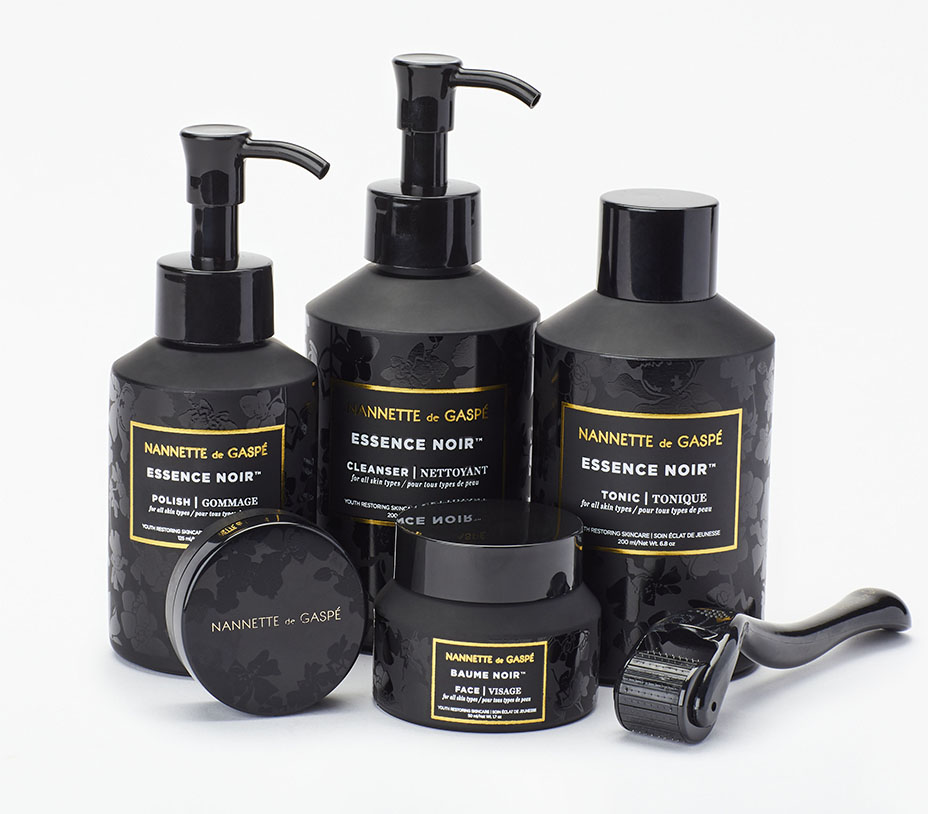 A microscopic molecule encapsulates the active ingredients and delivers them to the multiple layers of the skin, as far as the bloodstream, so they continue to feed and nourish the skin for up to eight hours. Most creams on the market are not even able to penetrate the first layer of the epidermis, so it’s surface saturation and the formulation is 3 to 5 percent active ingredients, with the rest water or glycerin. So as you go about your day, the environment degrades it. In our case, there’s no water and about 90 percent actives dry-printed on a textile that continues to deliver.

How did you come up with the idea of butt and bust masks??

In Europe, they have creams for the decolletage but those take anywhere from 42 to 75 days of twice-a-day massaging the cream in to see any results. We knew from our clinicals and 10 years of data that the results of our masks even in one day are the equivalent of what you’d get in 30 days from a premium cream. Our formula fills fat cells with hyaluronic acid and marine collagen that multiply 10 times when they meet natural hydration, which is why they are used in fillers, so technically it’s doing something very similar. When you use the product six days in a row for an hour a day and then two days the next week, our studies have shown up to a full cup size increase in breast volume with up to 1.1 centimeter lift and up to 23 percent improvement in elasticity for a perkier, more sculpted breast. In the buttocks we didn’t see an increase in volume, maybe because of the density of the fat cells, but we did see more elasticity and a more sculpted, lifted behind.

Get that bubble buttCheck out the @brennankilbane article from @intothegloss “Get Yourself an HBO Butt” which features our Uplift Revealed Tush infusers – now that’s something we can get behind. See link in bio. #NannetteDeGapse #NNTT #Uplift #BootyForDays #KimKardashian

So is this Steven Tyler’s secret?

I’m told that Steven tried the neck mask. But a lot of men have been using the tush mask. One of our friends and his partner texted us that both of them were so excited that their behinds had never looked better for Gay Pride month after using the mask.

I hear Katie Holmes is a fan. Any other A-list clients?

Yes, we were told that Katie asked a lot of questions and then bought some masks at Barneys. A few months later, last October, I was at an event in Toronto to celebrate the 180th anniversary of Holt Renfrew (owners Galen and Hilary Weston, who also own Selfridges, are friends) and I was seated across from Katie and she told me she loved them.

Just before we launched in 2016, I was at lunch with Charles and Pandora Delevingne and told them that I would be sending a set of masks to their daughter Cara. Pandora said, “Oh we had dinner with the Queen last night” [because they are related]; then she said, “It’s her 90th birthday and I’d like to give her your masks.” We were running to the finish line with our product and the Queen’s birthday is April 21, so we literally got them hot off and shipped the Youth Revealed Library of Skin Seduction [masks for eyes, face, hands, mouth and neck] overnight to Pandora in time for the Queen’s birthday.

Do you know who else loves them? Drake’s mom [Sandi Graham] buys them all the time here in Beverly Hills and apparently she gives them out to friends.

New year, new you? Hit the reset button for your skin with a little help from us. #NNTT #NannetteDeGaspe

Tell us about your new antiaging Art of Noir skin-care line.

We worked very hard to apply our technology to a cream; the Baume Noir moisturizer is virtually waterless with a concentration of over 20 active ingredients. Throughout the line, we have a proprietary concentrate of black Tahitian pearls, black orchids, black superfoods, black cumin and black fermented tea. The cleansers not only remove mascara, but they also have treatment benefits, so you feel hydrated; if you leave the exfoliator on, it doubles as a mask. The line is high-performing and it’s 95 percent natural. Like the masks, the creams are made in Canada, but the rest of the line is made in California.

My sister, Dr. Suzanne Mady, is a top doctor in Canada in nonsurgical cosmetics like Botox, fillers and mesotherapy. Mesotherapy has been so popular in Europe that I have friends who fly to Paris to get injections [reportedly used by Katy Perry, Madonna, Rihanna and Jennifer Aniston]; my sister has been doing meso injections for the last few years in Toronto and seeing great results in less crepiness of the decolletage, a reduction in fine lines and general improvement of the skin. Our system can deliver where needles inject, because it can go as far as the bloodstream, and a meso-injection is a superficial injection. So together we developed a mesotherapy treatment through masks called Vitality Revealed with no needles, no pain, no bruising, no downtime and a real delivery of actives (packed with hyaluronic acid, vitamins, minerals, algaes) launching this summer.