During his year-and-a-half helming Calvin Klein, Belgian designer Raf Simons has shown a voracious appetite for riffing on Hollywood on the runway, so much so that I’ve wondered if he wants to be a film director himself, like Tom Ford.

Last September, his show took inspiration from horror movies The Shining, Carrie and Psycho; in February, he put Warner Bros’ Looney Toons on knitwear, and flooded his show space with truckloads of real popcorn that put front row guests like Millie Bobby Brown ankle-deep in the stuff.

And on Tuesday night at New York Fashion Week, he gnawed on the 1975 film Jaws as inspiration, spitting out twisted-chic society dresses, peeled-down wetsuits worn as pants, unraveling knitwear, shirts with blood-stain print collars, and the piece de resistance, an actual Jaws CK logo T-shirt, part of an official collaboration with Universal Pictures, according to show notes. 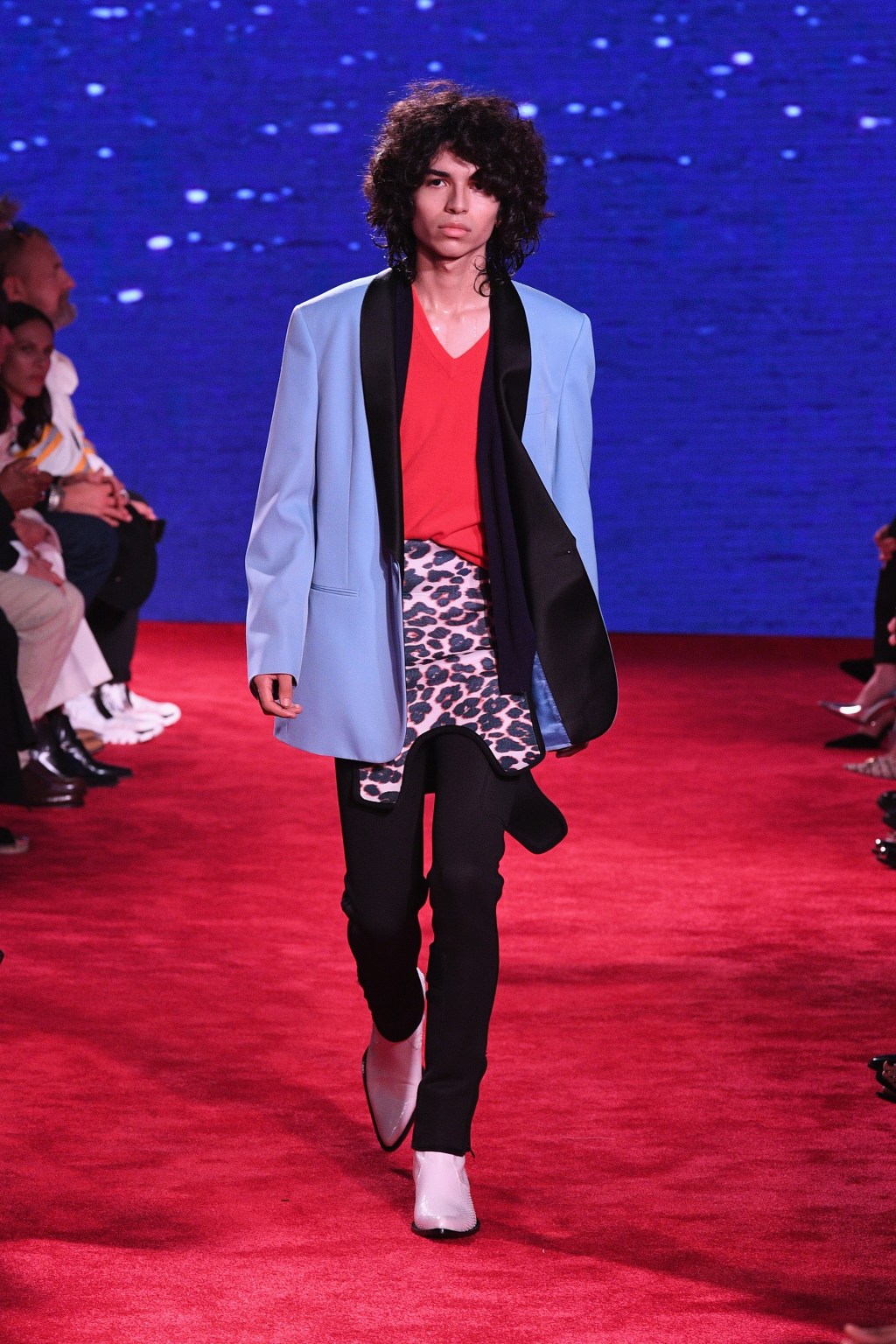 Taking a detour from last season’s prairies to the precipice of the American landscape, the beach, Simons aimed to capture “the tension between land and ocean,” he said, as well as the tension between American beauty and terror that is his focus at Calvin Klein. He set his runway against a screen flashing images of ocean waves, and then the tell tale sound of the Jaws shark approaching signaled the beginning of the show. 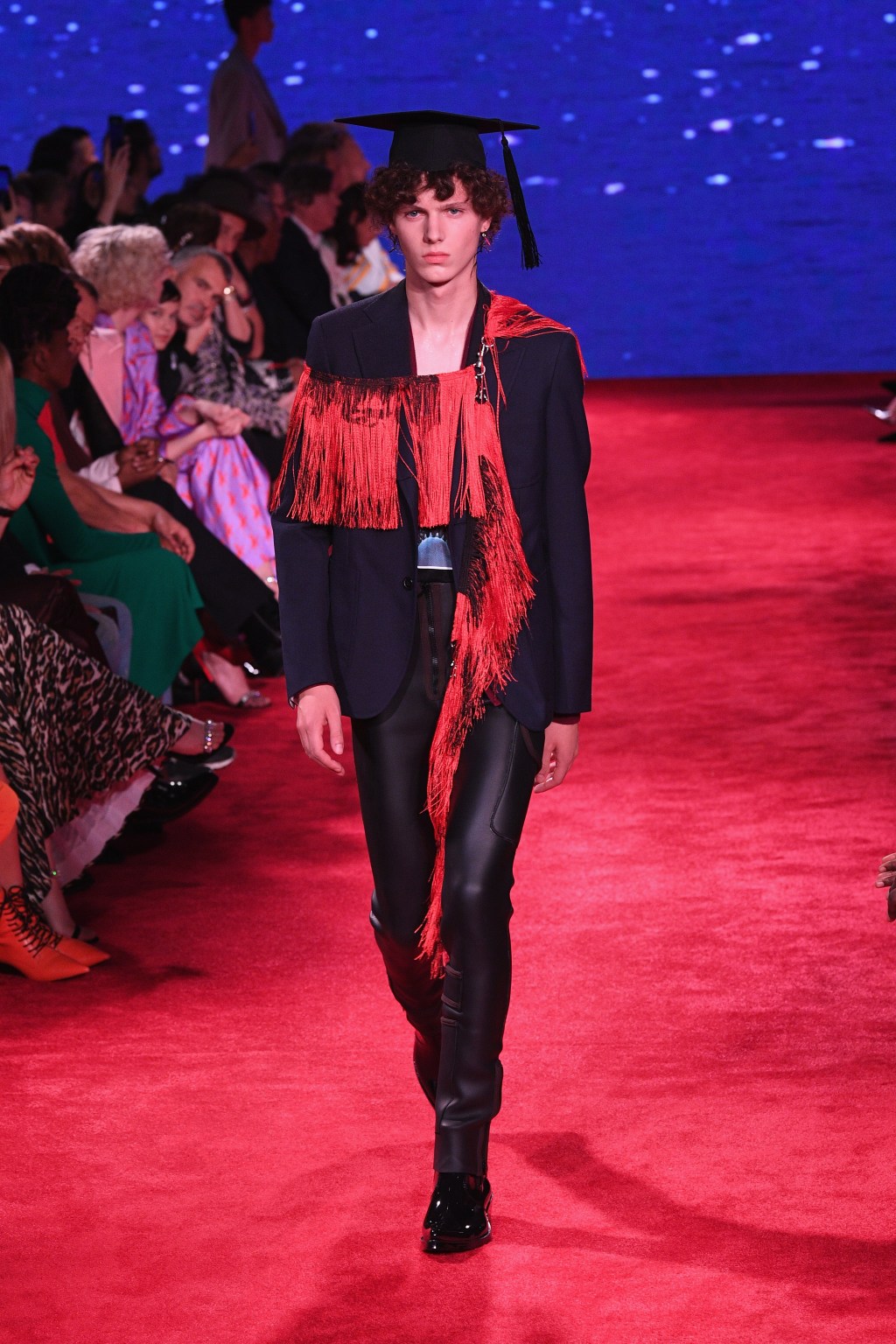 For men, there were oversized tweed jackets and schoolboy blazers, capes and mortar boards referencing another classic film, The Graduate. Layered over top were groovy-looking fringe scarves screen printed with imagery of artists Andy Warhol and Stephen Sprouse. 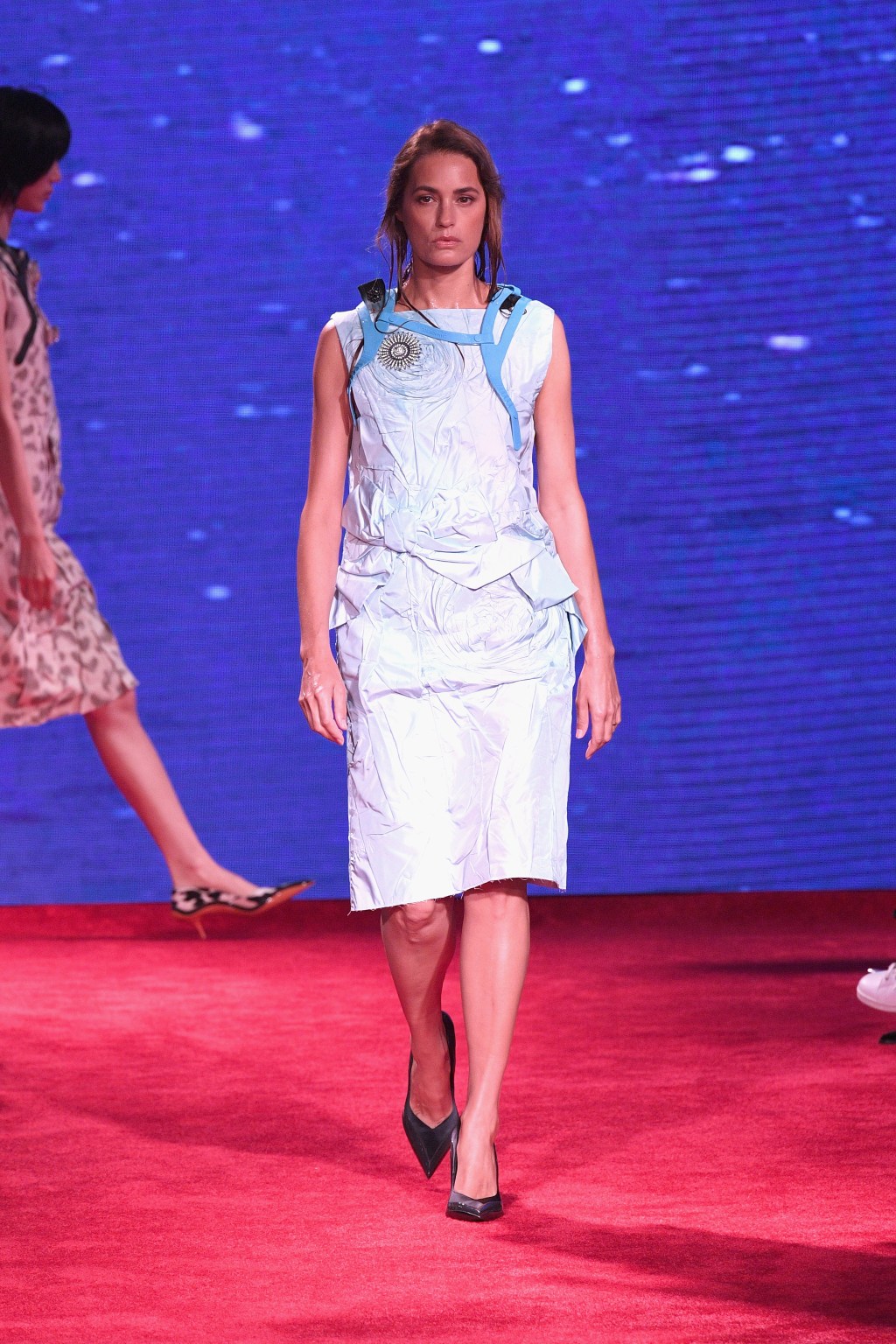 For women, cocktail dresses in couture chine patterns recreated from 1950s and 60s textiles, were gloriously roughed-up with tucks, folds, layers of material, and colorful nylon harnesses at the collar for a strange and wonderful take on dressing up. With the models’ stringy, wet hair, it suggested they just had emerged from the deep. 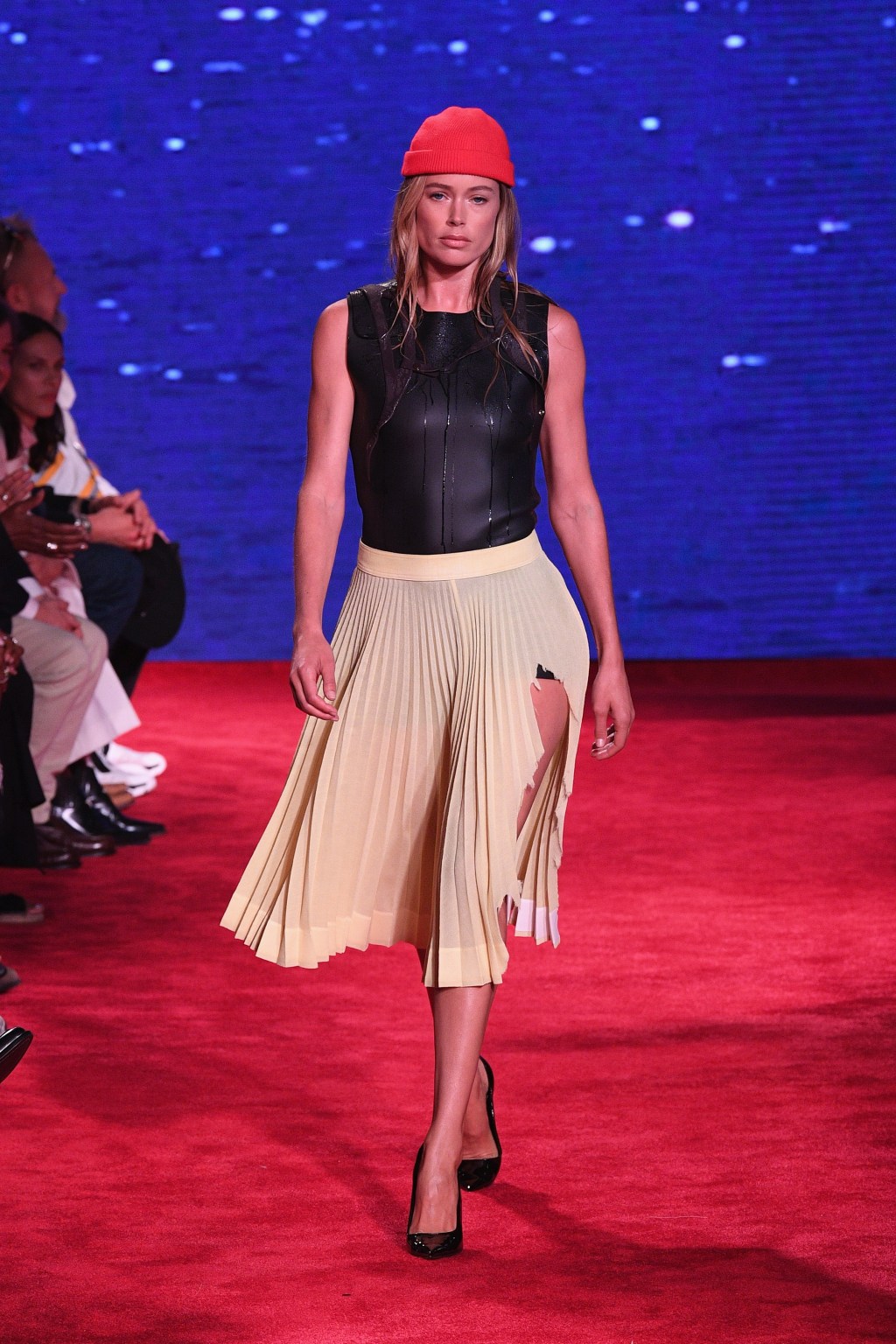 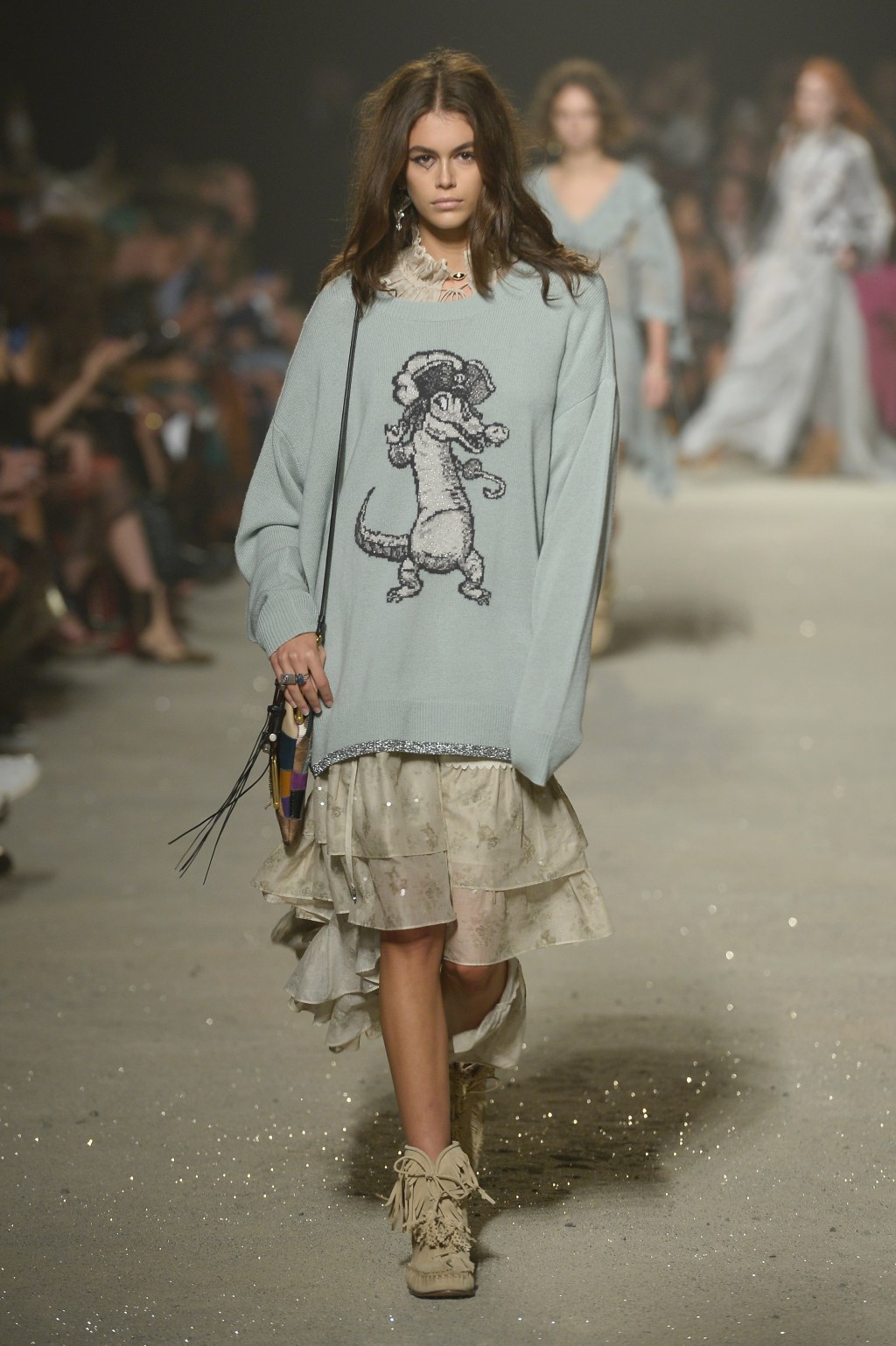 Also on Tuesday in New York, American heritage brand Coach debuted the latest iteration of its collaboration with Disney, with Kaia Gerber opening the show in a sweater emblazoned with Captain Hook remade as a crocodile. Dumbo and Bambi also made appearances in the apocalyptic collection, marking the fourth collaboration between Coach and Disney. The fashion brand used 1960s illustrations of Disney characters by Coach’s first designer Bonnie Cashin for the pieces. (Cashin was also a Hollywood costume designer, and married to a Disney illustrator.)

The shirt, Vuitton reps informed me, was not part of an official collaboration with the Netflix show, so it was not produced. But it did spurn desire for similar styles. “It’s always great to have a little accident like that in the styling,” Ghesquiere told Vogue at the time. “Like if the girl has kept her T-shirt from backstage.”

Gucci has also gone Hollywood, showing several pieces emblazoned with the familiar Paramount logo in its spring 2018 runway collection. (The T-shirt version can be yours for $590.) The logo has opened countless films since the studio’s founding in 1912, and lent an authentic, old Hollywood feel to the Italian luxury brand that has collaborated with a host of entertainers, including wardrobing Elton John for his farewell tour.

Gucci has also co-branded with the New York Yankees, creating instant collectors items for those in-the-know. And Jeremy Scott has tapped SpongeBob, The Simpsons, The Powerpuff Girls and Barbie for his namesake and Moschino collections. 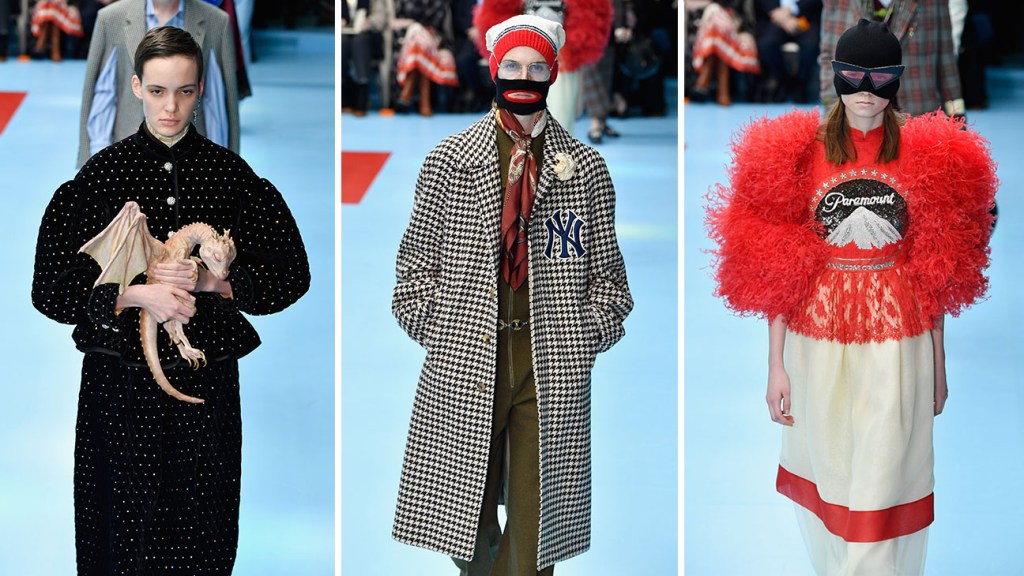 This phenomenon of Hollywood brands and entertainment properties mixing it up with high fashion is part of a larger trend of brand bingo that kicked into high gear with Vetements collaborating with not one, not two, but 18 brands for its spring 2017 runway show.

Since then, designers have been convinced that two names are better than one, particularly if they are the right brands. This New York Fashion Week alone, we’ve seen several new pairings on the runway, including Pyer Moss and FUBU, Telfar and Budweiser. (Edgy fashion brand Telfar has already partnered with White Castle.)

No doubt there will be more collabs to come at the European shows, where even before he made his runway debut, Burberry’s creative director Riccardo Tisci announced a merch partnership with the grand dame of British fashion Vivienne Westwood that will land in stores in December.