Continue to The Hollywood Reporter SKIP AD
You will be redirected back to your article in seconds
Skip to main content
February 12, 2019 7:44pm

On Monday night, some heavy-hitting Hollywood stylists showed up to support one of their own as Kollin Carter (Cardi B’s stylist and the man behind her Thierry Mugler looks at the Grammys) screened a short film at The London West Hollywood hotel in L.A.

Dubbed Muglerized, the eight-minute film (that can be viewed here and was edited back from 30 hours of footage) follows Cardi B and Carter to renowned French fashion designer Manfred Thierry Mugler’s archives in Paris for her fittings last month, where Mugler asks: “Are you looking for some drama?” Natch. Later, Cardi jokes, “What’s a good sign of money? Big hats!” (Although she ultimately did not wearing the topper that originally accompanied her on-stage look of an animal-print jumpsuit with crystal detail, a lavender satin cape and a peacock-like feather crinoline.) Then she adds:  “If it goes wrong…we’ll blame it on Kollin.”

Indeed, the stakes were high. Nominated for five Grammys, and ultimately taking home a historic win for Best Rap Album, the rapper had all eyes on her for her debut album, Invasion of Privacy. Last November, when Carter asked Mugler to dress Cardi B., the renowned 70-year-old designer initially turned him down via Instagram direct message. But Carter eventually secured a ‘Yes’ from Mugler to dress the star in not one, but three exclusive vintage looks for the 61st Grammys.

“I was open to pieces, I was open to ideas, but I came there to get that 1995 red carpet dress,” he told The Hollywood Reporter before the film began. “Immediately, when I first laid eyes on it, I knew that it was going to be the dress. I knew that it would be a conversation piece and that some people would hate it and that some people would love it. To me it was just everything that the night represented. I presented the dress to Cardi and, at first, she was a bit resistant because she’s like, ‘It’s a lot. I’m a little nervous.’”

But a foundation of trust had developed between Carter and Cardi (whom he refers to as “a little angel”) since they began working together before Bodak Yellow took the music industry by storm in 2017. Once again, Carter’s persistence paid off.

Carter noted the intricate construction of the dress that the rapper wore on the red carpet Sunday, including a skirt that literally screwed on and off and “there were two strings with pearls connected to the back of the dress and connected to the inside of the bustier that keep the piece upward behind her,” he told THR.

“It was interesting to see the genius behind how these pieces were made and how much passion they were made with. You can just tell they aren’t modern. That’s not to take away from anything that’s going on now, but it was just so special and so different. The hips were built out of metal. The fabric was hard around the hips to the back area. Seeing the piece was one thing, but feeling it was another. ‘This man, where was his head?’ I really thought I was creative until I looked at this piece!”

Although it would seem a gown formed with metal would weigh the five-foot-three rapper down, it only elevated her appearance. “It didn’t weigh a lot,” Carter continued. “He was one of the first to incorporate a lot of metal in his garments, but it doesn’t read as that or feel that way. It was still very comfortable for her. Nothing she wore that night was uncomfortable. [But] it was bit hard to walk in because it was slim at the leg. We didn’t care though. We were like, ‘Listen she doesn’t care. She’ll tiptoe.’”

And stand on her toes, as an entourage of dozens trailed behind her down the red carpet, she did.

After the film credits rolled, guests retreated to the bar to toast Carter on his success. 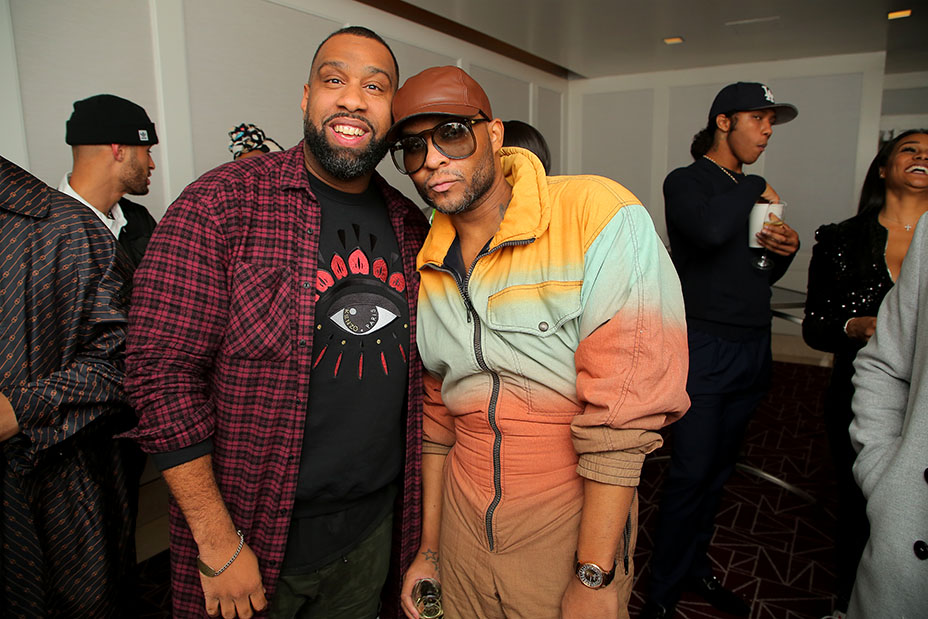 “I thought it was inspiring,”  Wayman Bannerman, one half of stylist duo Wayman and Micah (known for dressing Regina King and KiKi Layne this awards season) told THR. “It was a bold move to inspire generations of people that are entering the fashion industry and existing members of the fashion industry. It really asks us to be creative, bold, daring and to think out of the box.”

“When he said his dream came true, my dream for him came true,” Law Roach, who dresses Ariana Grande and Zendaya, told THR of his former apprentice of two-and-a-half years. “I feel like a proud mommy. He’s proof that in this industry there’s room for more than one. There was always one who was at the top and it’s not about that anymore. It’s about getting to a certain place and bringing people around you to create new opportunities. I’m going to say this as humbly as possible: He’s now a part of my legacy and my lineage, and it makes me really proud to see him do something this great. It’s fabulous.”

Up next for Cardi’s style story?

“She’s really open and she’s really free, so we can play around and do anything” says Carter. “I’ve always taken an editorial approach with her. Sometimes that’s fun, but sometimes it’s like, ‘Let’s do a turtleneck and a suit.’ You don’t really see that a lot from female rappers. I like to keep it fresh, versatile and fashion forward. Will she have on many dresses like that? No. I wouldn’t do that every award show. I feel like that’s a gift and it should pop out here and there. I love minimalism as well. But I felt like that was a super special night and it called for that. We’re pretty open to what’s next in fashion.”