Arriving at John F. Kennedy International Airport Wednesday night, the Mercedes-Benz vans shuttling guests out from Manhattan for Louis Vuitton’s Cruise 2020 show passed a billboard that declared, “A New JFK Is Coming.” Many of the updates at the city’s busiest airport are not only about ease, but also rooted in returning passenger notions of travel to a decidedly more glamorous era — with his latest collection, Nicolas Ghesquière is striving to accomplish a similar goal, honoring icons of the past while also looking toward the future. 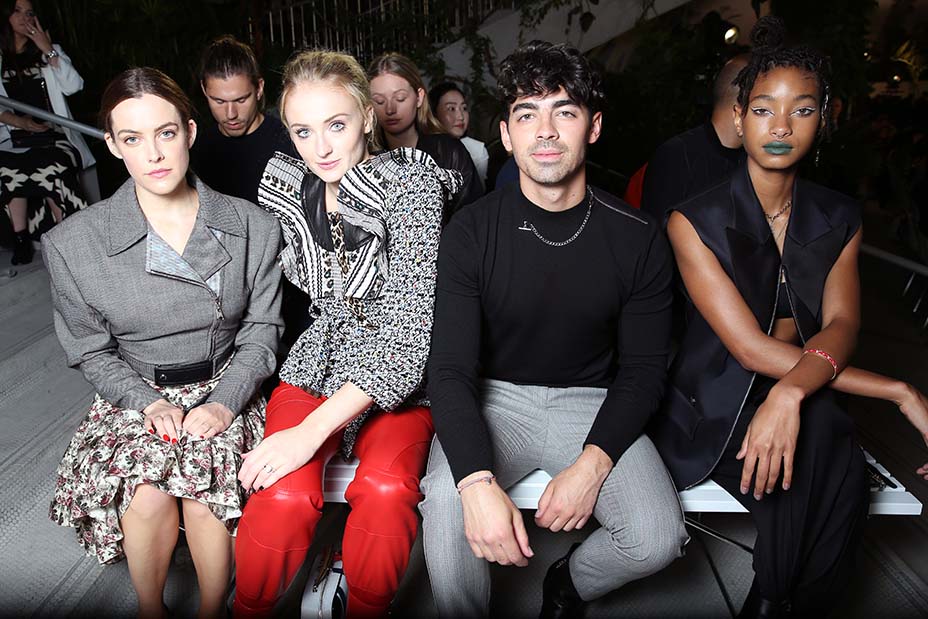 Stepping into an airport terminal shouldn’t just be about the worry of baggage weight or how long the TSA line will be. It’s more about embarking on a journey and the related anticipation, and that was the mood as guests turned up to view Ghesquière’s Cruise collection, the season that was created so elegant, moneyed women could purchase traveling clothes needed for voyages to warmer climates in winter months. The front row was stocked with stars one could easily imagine on such excursions, Louis Vuitton fans and ambassadors that included Cate Blanchett, Julianne Moore, Michelle Williams, Emma Stone, Alicia Vikander, Jennifer Connelly, Willow Smith, Joe Jonas and Sophie Turner, Riley Keough, Justin Theroux – and that’s just for starters. Louis Vuitton transported VIP clients and editors from around the world to attend this show, and the brand accessorized the monumental production with plenty of star power.

The Best Valentine's Day Gifts for Everyone from Hollywood-Loved Brands 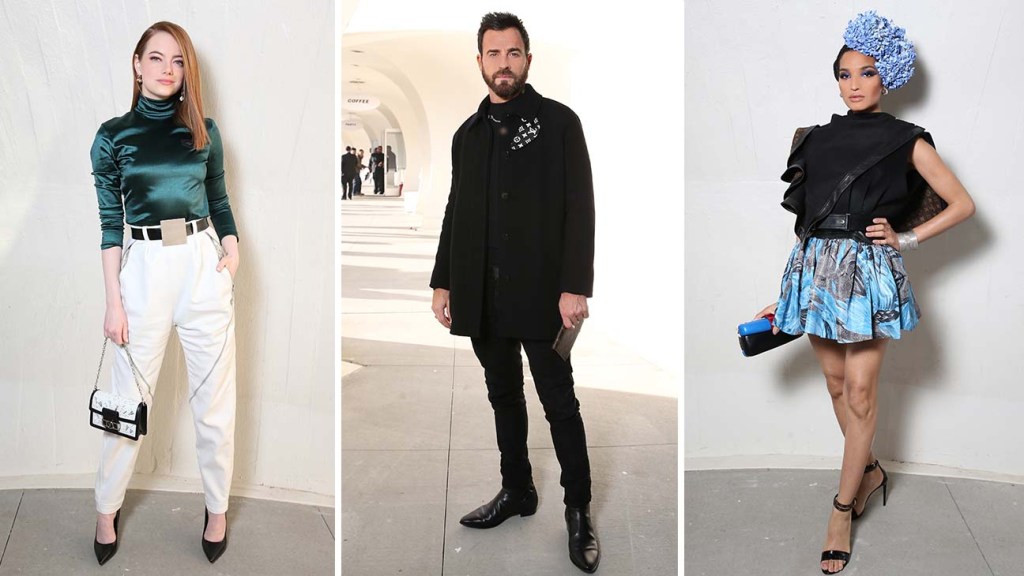 That was true of the location as well: the TWA Flight Center, the iconic winged terminal designed by Finnish architect Eero Saarinen and which originally opened in 1962, though it felt a bit dusty and neglected after the airline shuttered in 2001. In 2008 Jet Blue took over the terminal, rechristening it T5, though it’s easy to wonder how many people in transit in recent years have stopped to marvel at its style. But Saarinen’s most famous design is sure to enjoy the spotlight again as the hub of the TWA Hotel, opening on May 15 with 512 retro-themed guestrooms, two Gerber Group lounges (including a rooftop pool bar that overlooks JFK’s runway) and a café helmed by Jeans-Georges Vongerichten.

Ghesquière traveled through the terminal in the latter half of the 1990s and is among those who are pleased that the space will once again be celebrated. “This place was forgotten for 20 years, and now has come back to life,” the designer said in a statement. “It’s like a sanctuary that’s been revived, and seeing it enchant anew in a different iteration, as a hotel, is a great pleasure. It’s about rediscovering an uncommon place that yet is part of American heritage.” 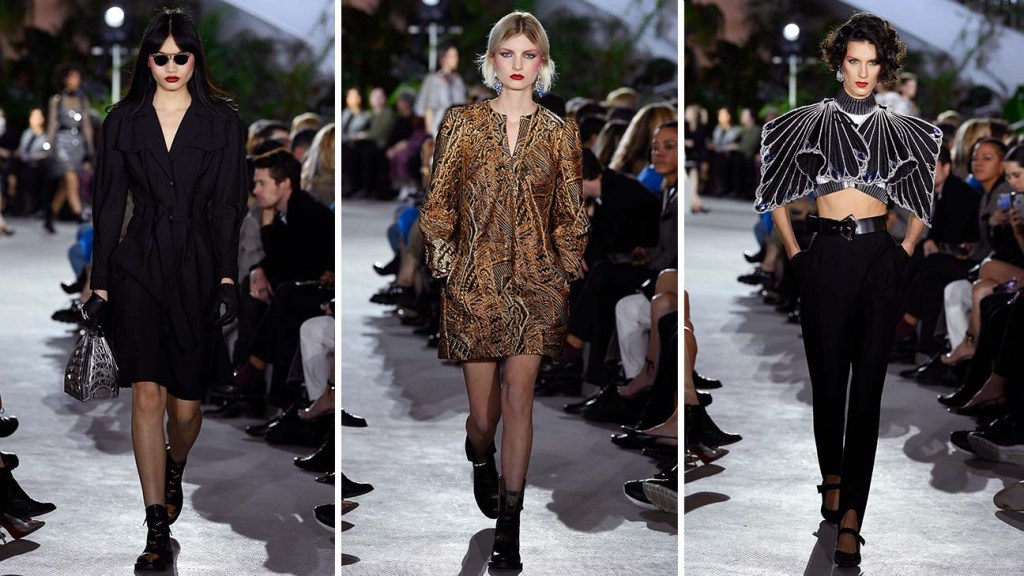 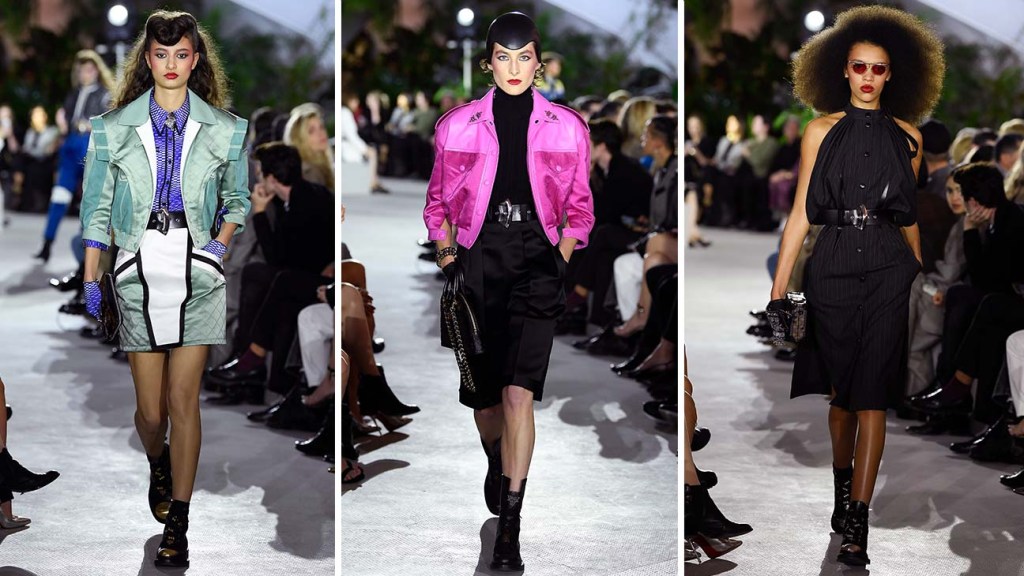 Given the location, was there any concern the clothes likewise would convey an overtly retro vibe? That’s not Ghesquière’s style (besides, the fictional designer portrayed by Helena Bonham Carter already played that card in last year’s Ocean’s Eight with a rightly panned collection in the same space). Instead he crafted an artful exploration of luxe fabrics and details meant to evoke thoughts of iconic design, as well as the relationship between Paris and New York, easily traversed via a transatlantic flight. Bomber jackets might put one in mind of pilots, but they weren’t so literal; rather, they were cropped and rendered in bright colors like mint and fuchsia, while evening was all about texture and sparkle, from a gold brocade caftan-style minidress to a fluttering capelet richly trimmed with crystals. Ultimately this is a collection all about layering and great pieces, from leather skirts and jackets featuring graphic details that seemed to take their cue from Louis Vuitton travel advertisements of the 1930s to wrap and peplum skirts in richly toned purple satin or a black and silver stripe. 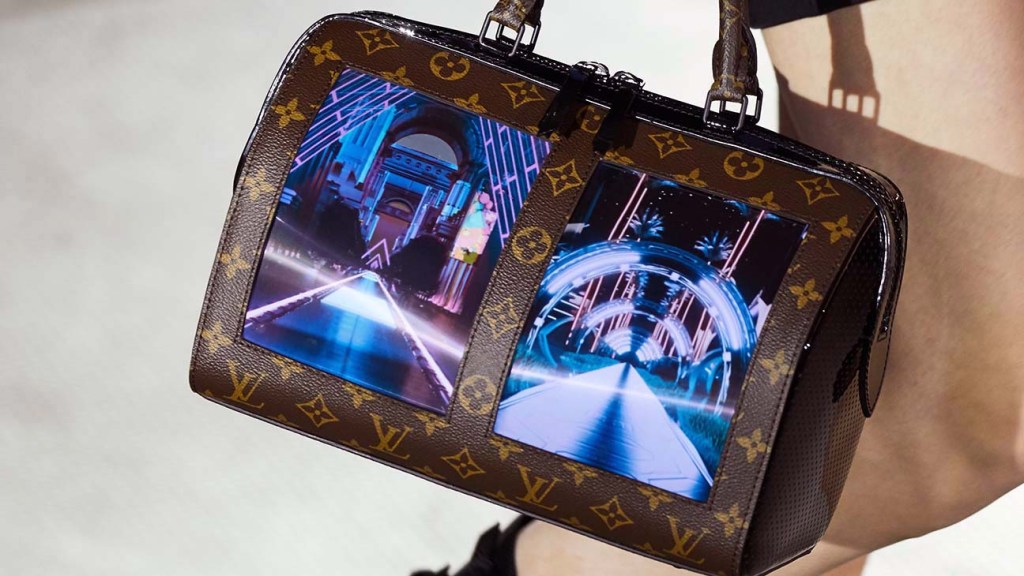 Carrying anything that resembled luggage on this runway also would have been a conspicuous cliché, so Ghesquière opted for modestly sized pieces that also nodded to New York glamour, including one style that paid tribute to the top of the Chrysler Building. He has also reimagined the brand’s legendary Speedy for the digital age, embedding screens on its side, while a white mini hatbox with a detail of graphic stripes was the most overt reference to jet-age travel.

Following the show, everyone decamped to MoMA PS1, the contemporary-art museum in Long Island City, for a party under the stars (the celestial variety). Mark Ronson took over the DJ duties after 9 p.m. while Connelly, Jonas and Turner mingled with Louis Vuitton execs at VIP tables along one side of the dance floor. And if guests looked up, they could see the jets flying not from JFK but nearby LaGuardia, a meta moment that after such a night made travel seem not like a chore, but only seductive. 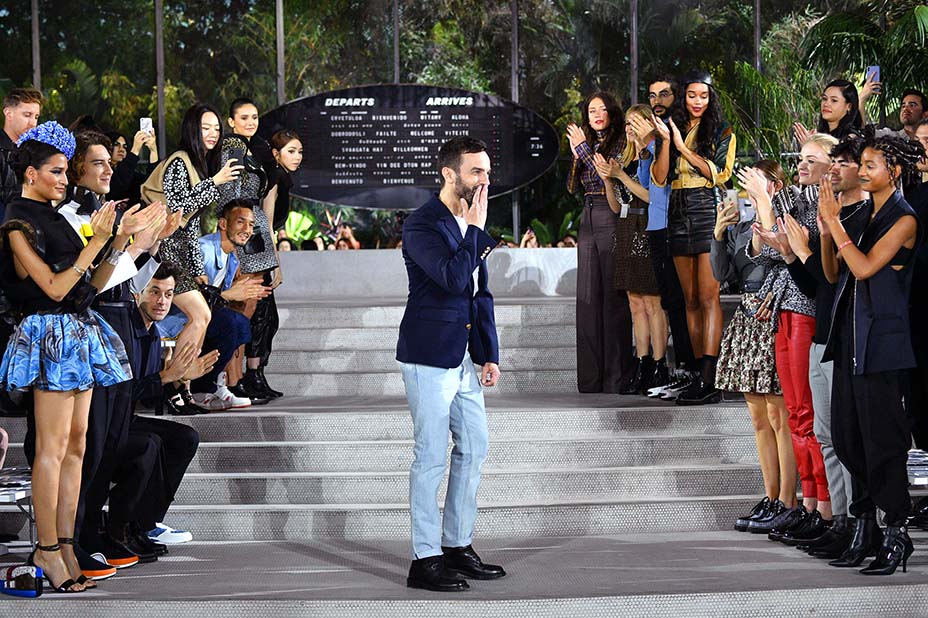