Catherine the Great may have been adept at mobilizing armies for Mother Russia, but Maja Meschede knows more than a thing or two about mustering the necessary resources to create the roughly 3,000 costumes required for the HBO miniseries of the same name, the second episode of which airs tonight.

“We filmed between September and early December last year, three months, but we didn’t start making Helen Mirren’s dresses until July,” Meschede says during a call from rainy Manchester, England, where she’s working on a sci-fi film that she acknowledges is the polar opposite from 18th-century Russia. “We created 60 head-to-toe looks for Helen, everything from scratch, from corsets and undergarments to court gowns and banyas, which is a sort of 18th-century Russian dressing gown. And then of course there were costumes for other characters: Jason Clarke as Potemkin, for example; his looks were very intricate. We rented costumes for extras, but those looks still had to be styled from head to toe. It was a very ambitious project.”

To accomplish the quantity and quality of designs needed, the costume team for Catherine the Great approached triple digits, including six costume assistants, 30 seamstresses, four costume cutters and 20 embroiderers. Meschede recalls that one of her favorite memories was watching 15 embroiderers all around one table, working on the pearl beading and other handwork for the gold court dress Mirren wears for a key scene in the series premiere. 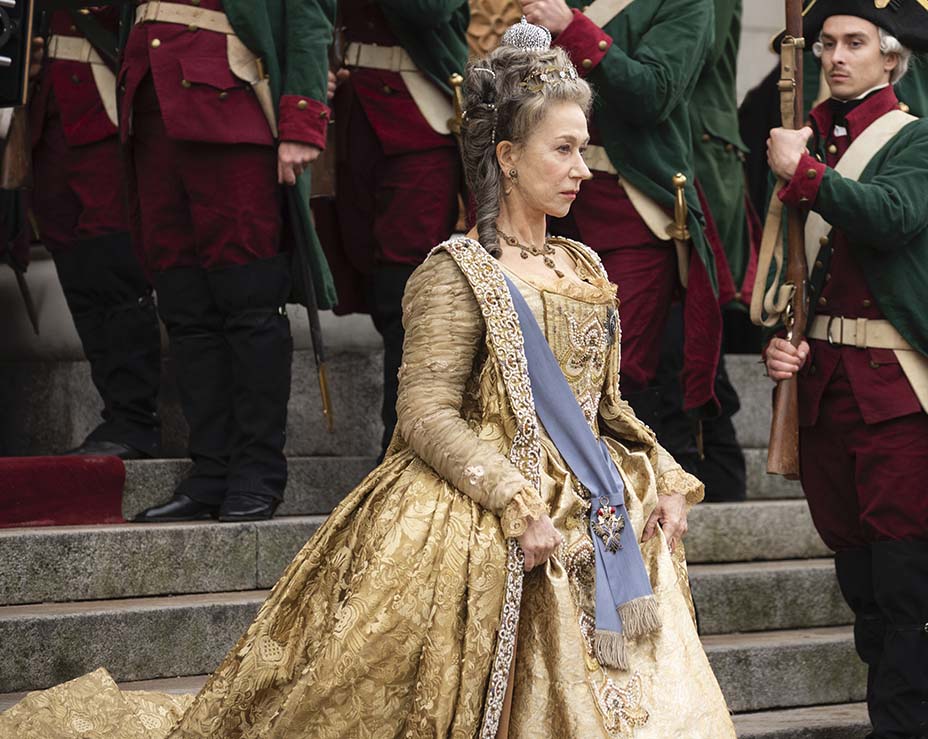 In addition to playing the title role, Mirren is an executive producer on Catherine the Great and offered her ideas about the Russian empress during three preproduction meetings with Meschede. “We talked about the idea that she was a very strong woman who often reflected that idea through her love of military dress, but there was also a softer side to her,” Meschede says. “For one scene in which she meets with her ministers, I had a different gown planned, an official court dress, but when Helen tried it on, she suggested that perhaps for this scene she should be wearing a banya. She liked the idea that she would look more relaxed and laid-back and feminine, and at the same time she’s bossing around all these men. And of course she was absolutely right.” 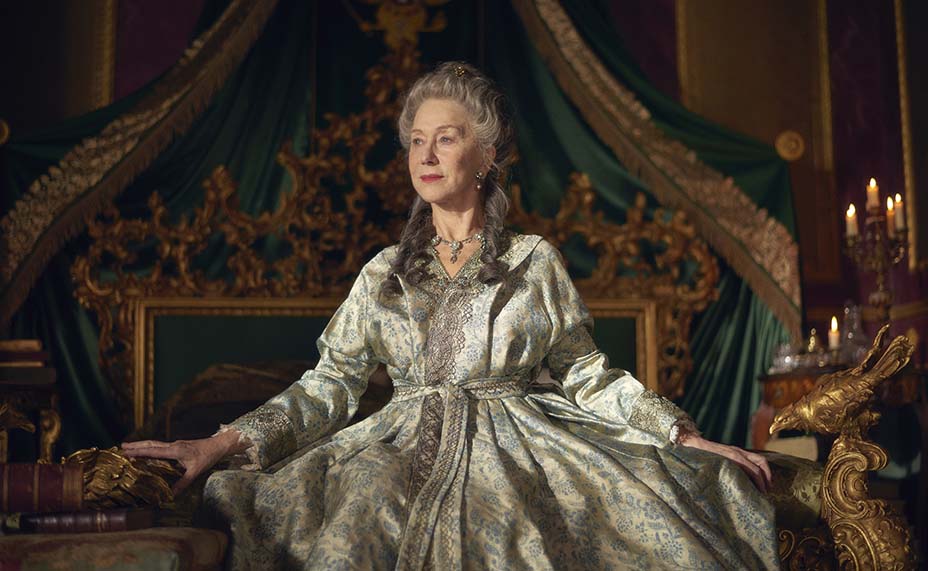 Prior to launching into design and costume construction, Meschede heavily researched the time period, gathering every book she could find and visiting Saint Petersburg’s Hermitage Museum to ensure accuracy in details. “At the Hermitage I was able to see some of Catherine’s original gowns and jewels, while for the jewelry, I was able to take those designs and have them reproduced,” she says. “I really love digging through history. Research is my favorite part of costume design, because through the fashions of the period, you’re also learning about society, about who these people were. I also had never done something set in 18th-century Russia before, but I always like a challenge.” However, some modern details were required for both comfort and expediency, from plastic boning in corsets so they would be as light as possible to hidden zippers and lacing to speed up dressing and undressing.

Meschede admits that she felt a bit like a kid in a candy store working on the HBO production, which included spending four weeks in Rome, Milan, Venice and Florence to purchase fabrics. “Italy has the best shops for fabrics for 18th-century costumes,” she says. One day in Rome, she and her team got a little lost, and instead of their intended destination, she found herself at Lisio, a 300-year-old textile maker that historically has crafted fabrics for the Pope. “It was the most amazing store and contained one of their original looms,” Meschede remembers. “I could have bought so much in there, but a piece of fabric at Lisio is like 3,000 euros [approximately $3,330] for a meter. I did buy bits and pieces, including a beautiful piece we used for one of Potemkin’s dressing gowns. I remember my costume supervisors standing behind me with their calculators in their hands, rolling their eyes, because of course I did have a budget. But it was really fun.” 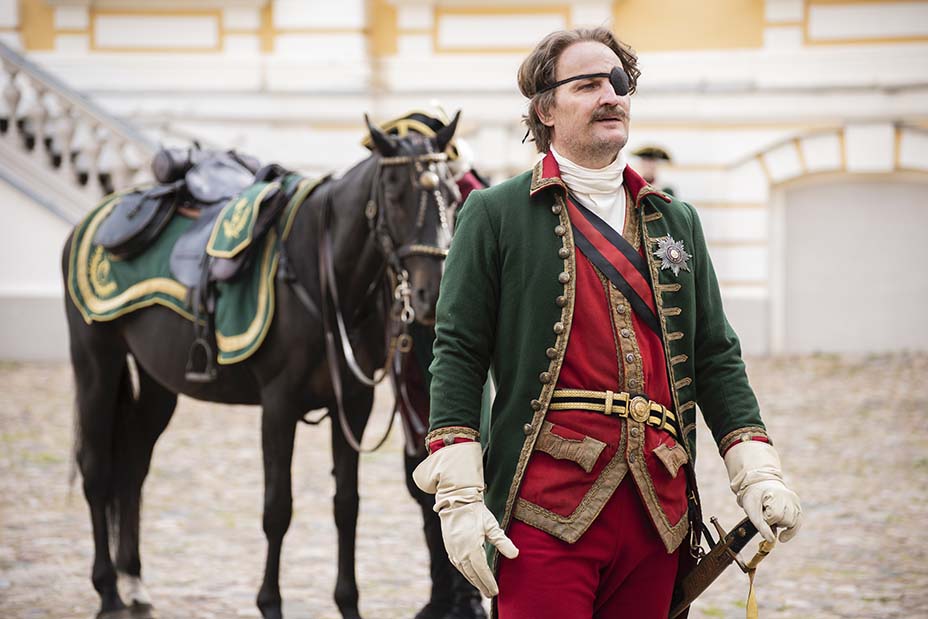 Working with Clarke, who plays Grigory Potemkin, the Russian minister and military leader who was favored by Catherine and eventually became her lover, also ranked among Meschede’s favorite experiences. “He brought a very method approach to the role and was quite particular about his costumes,” she says. “Potemkin was a very eccentric man, and we see his evolution partly through his clothes, from his early years as an officer to later, when Catherine makes him her prince. His uniform could be mixed with elements of Turkish robes, and there were some specific rings we had made for him. Potemkin also wore a cameo brooch, something that Catherine would have given to him, and it was important to Jason that this was included on his costumes, to show that Potemkin was thinking about her.” 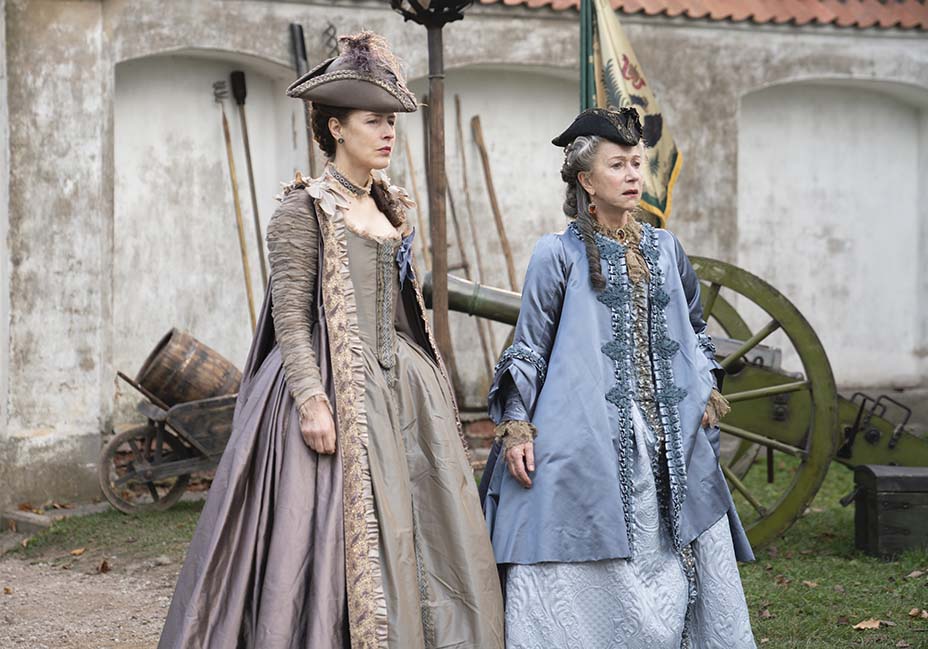 Another element deemed integral to any production set in 18th-century Russia presented more of a challenge: how to incorporate fur into the costume designs. “We had a big meeting about it,” Meschede says. “I’m a vegan and anti-fur; you want to be authentic, but we needed a strategy, because you can’t do Russia during this time period and not include fur.”

Ultimately, only about 1 percent of the fur seen throughout the miniseries is genuine, Meschede estimates. “There are some factories in England that produce really beautiful fake fur,” she says. “For some of it, we brought in an artist who is very skilled at painting fake fur so it looks even more authentic. She would paint the tips and also create effects so the pieces had the shine of real fur.” 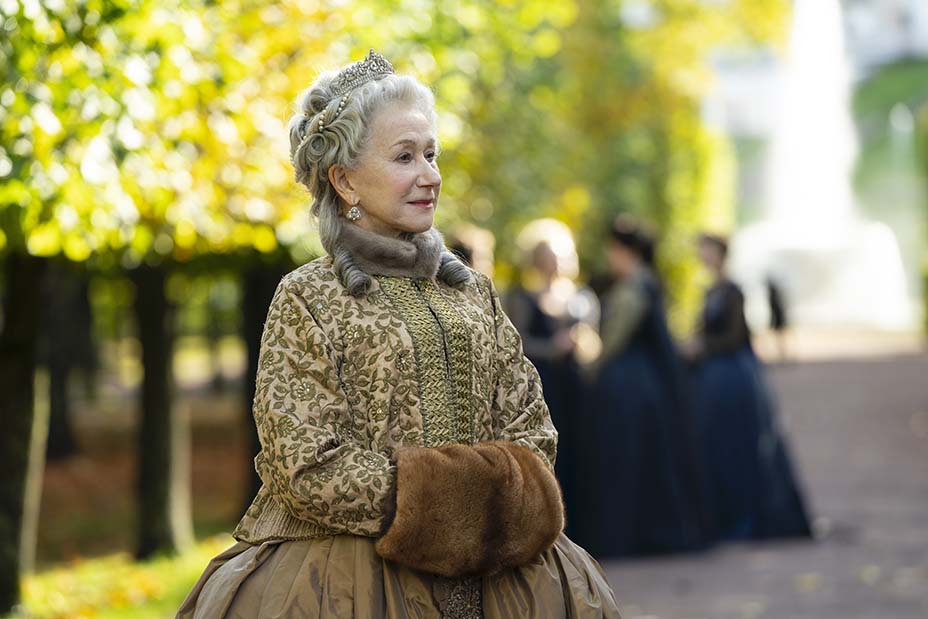 And as for that 1 percent that’s genuine? Meschede picked up pieces from secondhand shops and flea markets around London, where she’s based. “We used those pieces to make two wraps that are very prominent in the series – one was a really old piece of fur, and I felt like we were always chasing away the moths,” she says. “But if we had to use it, I’m glad we could source something that was recycled. I would never use new fur.”

Even with such an abbreviated schedule, Meschede doesn’t hesitate to admit she loved every minute of the project. “Something like this doesn’t come along every day, to create the costumes for a production that’s about one of the most decadent courts in history,” she says. “With independent productions, sometimes you have to get really inventive, the idea of what can you do and what can you find with no money. But HBO was very supportive. I’m so pleased with what we achieved. It looks sumptuous, as it should, but more important, it looks authentic.”