Ayesha Curry has a lot on her plate right now — and we’re not just talking preparations for Thanksgiving.

The celebrity chef and wife of NBA star Stephen Curry has recently joined CoverGirl as a new ambassador, announced a soon-to-come mobile cooking game, opened her International Smoke restaurant with chef Michael Mina in San Francisco, launched her new cookware line at JCPenney and Target, and founded meal-kit delivery service Homemade. It’s no wonder she made the 2018 Forbes 30 Under 30 list in the Food & Drink category.

In addition to her Food Network series, Ayesha’s Home Kitchen, she will soon appear on ABC’s The Great American Baking Show, an adaptation of The Great British Bake Off, as a co-host with Anthony “Spice” Adams. (The show’s season 3 premieres Dec. 7.) But first, The Hollywood Reporter chatted with Curry about her recent partnership with food storage brand Glad in support of No Kid Hungry and her go-to recipe for Thanksgiving leftovers.

How to Score a VIP Table at No-Reservations Eataly LA

Tell us about your recent partnership with Glad in support of No Kid Hungry.

I’ve been a Glad partner for many years now and I’ve been a huge advocate for No Kid Hungry. Anytime I can bring the two together, I’m ecstatic. Basically, my friend, Sabrina Soto, wasn’t able to go back to the East Coast this year to see her family and she always goes back every year, so we were able to get her mom to cook up her Thanksgiving meal a little early and wrap the whole table in Press’n Seal and put it in this super-cool see-through Glad truck and drive it across the country and basically with every mile driven, we were able to donate $1, so we raised $5,000 for No Kid Hungry in order to support their efforts. There’s also a way for everyone else to give back because I have a friendsgiving page on nokidhungry.org and Glad’s going to match up to $5,000 of the public’s donation, so I’m super-excited about that.

Speaking of Thanksgiving, I know you also have your meal-kit delivery service Homemade and you’ve created some sides for families to prep for the holiday.

We did four sides, and I felt like they were so classic and true to my family, stuff we have every year. We have delicious sweet potato casserole with a brown sugar pecan crust; I love that sweet and savory aspect of food and I feel it’s perfect for the holidays. There’s my mac ‘n’ cheese, which is highly requested at every family event I have. Then, of course, you’ve got to get your veggies in, so we did a creamy white bean and kale side and a cornbread stuffing with a sweet and savory twist. Good, classic comfort food. It’s really cool because for Christmas, we’ll be providing homemade holiday boxes for families in need in the Oakland and surrounding areas.

Leftover turkey soup is always the go-to. You can literally take all your veggie sides, throw them into stock or make your own stock with leftover turkey bones or ham bones and just throw everything into a soup. That’s definitely my favorite thing to do.

What are your plans for Thanksgiving this year?

We’re doing a big family style Thanksgiving dinner. Luckily, [Stephen] has Thanksgiving at home this year, so we’re able to do it at my house. I’ll be prepping all day today and tomorrow.

The Great #AmericanBakingShow is BACK and we have two new hosts! Welcome @ayeshacurry and @spiceadams!

A post shared by The Great American Baking Show (@thegreatamericanbakingshow) on Sep 21, 2017 at 10:41am PDT

You also have The Great American Baking Show premiering next month — what can we expect? What might be similar or different than the British version?

That was a super-fun project. I think how it’ll differ from the British version is the comedy; my co-host, Spice, is hilarious and he was able to bring that comedy out of me and we just have so much fun together. We were able to lighten the bakers up a little bit. Spice isn’t in the culinary world by any means — he says the only thing he knows how to make is a red velvet cake, so he brings that reliability and vulnerability to the viewers. Then, of course, the one component that I think makes it similar to the British version is Paul Hollywood, and he’s just a hoot. He’s a great judge; he’s tough but he’s kind. I think you can expect high stakes, really cool challenges and overall exciting holiday ride. Mary Berry would always talk about “soggy bottoms,” and now I’ve gotten to take over talking about “soggy bottoms,” so that was kind of exciting for me (laughs).

Did you get any recipe ideas after seeing all these bakers do their thing?

Oh, totally. That’s one reason I wanted to do the show. I feel cooking and baking are two completely different things, and obviously I cook for a living — it’s about finesse and experimenting. With baking, it’s about technique … I was able to learn a little bit more baking [on the show] and watch everybody’s techniques. No two bakes were alike. I think you’ll see how much technique it really takes to make a successful cake (laughs).

You have a lot going on right now. Is there anything you’re looking to accomplish that you haven’t yet?

No, you know what? At this point, it’s taking everything I have and everything I’ve started up and trying to make it great and keep things innovative. I think that’s what’s important to me at this point. 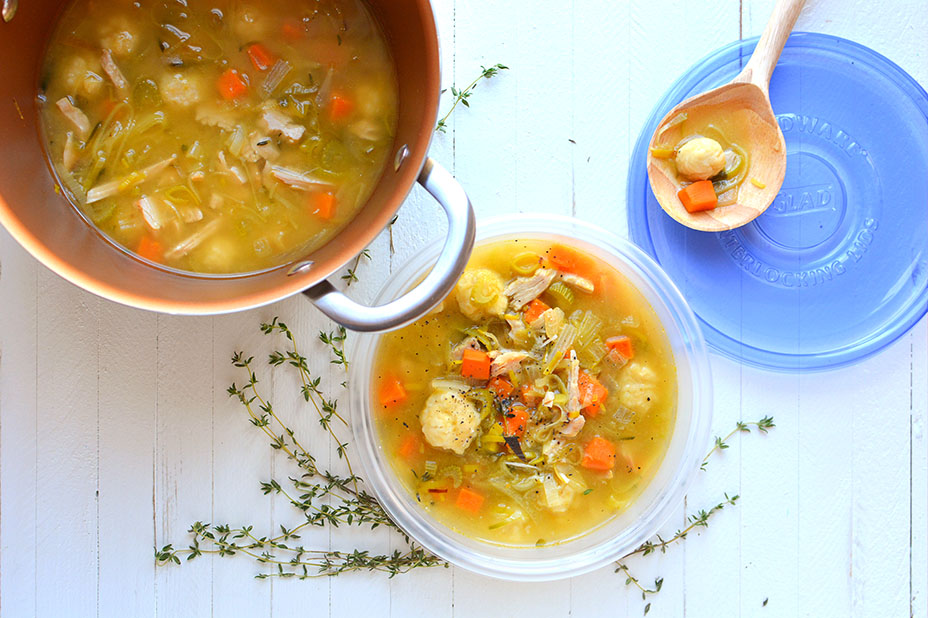 1. Combine the diced onion, cubed yam or sweet potato, celery, leek, thyme, oregano and bay leaves in a large stockpot. Mix until onions, celery and leeks are soft. Add the turkey and season with a pinch each of salt and pepper. Pour in the broth, water and wine and bring to a boil. Add the leftover cooked sweet potatoes during the last 5 minutes of cooking. Remove the herb springs and bay leaves.Taste the soup and season with more salt and pepper as needed. Ladle into bowls and serve.

2. When the soup is simmering, mix 2 cups all-purpose flour with ¼ cup water and ½ teaspoon kosher salt to form a dough. Roll the dough into little balls with the palms of your hands, then drop them into the soup during the last 5 minutes or so. You’ll have about 24 dumplings.

Meal planning tip: You can make extra dumplings ahead of time and freeze to add to soup throughout the chilly season. Simply follow the directions and roll into the balls. To freeze, place individual balls on a baking sheet and place in the freezer. Once frozen, transfer to a GladWare container, sized to fit, put the top on and store in the coldest part of the freezer. Then take out individual dumplings as desired when ready to eat.