‘Tis the season for fake bakes, but getting the right shade of radiance (minus streaks or pasty spots) is tricky business. It’s an art that Brit spray-tan pro Jules Von Hep has mastered. His career launched a decade ago in London when he met celeb facialist and self-tanning expert Nichola Joss, now a favorite of Meghan Markle, who suggested he get into the business. Soon Von Hep was contracted for spray tanning and body makeup by British TV shows Strictly Come Dancing and The X Factor and booking Blake Lively, Kate Moss, Sienna Miller, Kendall Jenner and Lily James in London, New York and Los Angeles.

“When filming, actors book tanning for a particular role, so I have to think of continuity,” he says. “I tanned Matt Smith for the entire run of ‘The Crown’ because he’s playing Prince Philip, who was Greek. TV presenters love to be tanned all the time because they’re on camera 24/7. I’m always on call, so I carry my passport with me. I was walking down the street in London recently and a publicist told me to be at Heathrow in an hour to go to Venice, where I was taken by gondola to an island to do a spray tan for a red carpet event.”

A couple of weeks ago, Von Hep launched a vegan, organic self-tanning line, Isle of Paradise ($22-$29) sold exclusively at Sephora in the U.S, with a unique focus on color-correction. “When I was doing shoots and working on TV sets, the spray-tan color wasn’t great, so I’d have to use color-correcting makeup to illuminate, to hide redness, to cancel out the orange tones, and I started to mix my own products backstage. Our line offers three shades. Light is a peach hue that gives a sun-kissed glow and brightens the skin. The medium has green tones to calm redness, hide stress in the skin, and soothe inflammation for a golden tan. And dark has a violet base that cancels out the orange so you get the best classic dark tan possible. Three formats work for face and body: Drops that turn moisturizers into tanning creams, mousse applied with a mitt that lasts the longest, and waters that I spray with.” 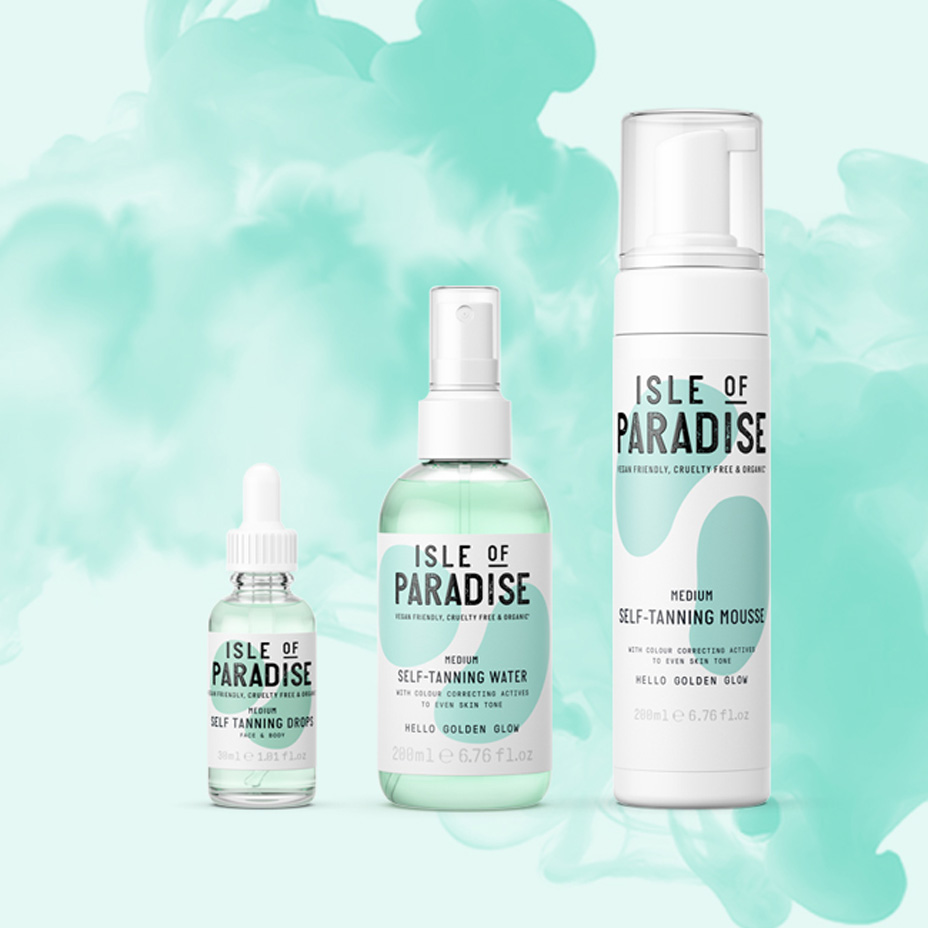 There’s also a wash-off body bronzer, a self-tan eraser (to exfoliate away mistakes or tans that have passed their expiration date) and a primer that preps the skin for longer-lasting results. All Isle of Paradise products are packed with organic ingredients including coconut oils, avocado and chia seed oil and stripped of synthetics, toxins, mineral oils and unnecessary natural additives such as silk for a sleek feel or honey for marketing buzz that Von Hep says cut down on performance value.

So what makes a tan A-list? “Anybody can paint a fence; it’s about the details,” he says. “We call body sculpting ‘tantouring.’ I add different levels of tan, particularly in between the thighs and on the buttocks — a tiny amount of tan in a triangle shape underneath the buttocks gives the illusion that it’s more lifted. I’ve done a lot of naked celeb shoots, where they want their buttocks tanned and contoured and shaded, especially with clients who don’t have the body they used to when they started in the industry. One client demanded that I completely sculpt her entire body on set, which took a couple hours. You have to think about where the sun is hitting the skin and where’s it not (palms, knuckles, in between fingers and nails). We apply coconut oil in those spots and, for men, we buff through the beard afterward to remove the color.”

As for D.I.Y. tanning, Von Hep says to shower and dry the skin just before applying tanner “because hydrated skin will take the tan better and it will look more uniform.” Spritzing on his primer also helps, but avoid lotions or oils as those will prevent the tanning products from absorbing into the skin. “I tell my clients to put a face cloth with essential oils on it in the freezer before I arrive and I run it over the legs to close all the pores before I apply the tanner,” he says. “And to spray your own back, hold your hand above your shoulders, lean forward and spray tanner into the air and it will land evenly on the back. That’s how I do mine, because my boyfriend is useless.”

I thought I’d film myself tanning last night! Take off make up and deodorant and begin prepping the skin with @theisleofparadise Prep It! A primer I developed to aid in the absorption of self tan which therefore results in a deeper colour. IKR! Moisturise hands, elbows, knees and feet (as tan clings to these areas, and babe we want this to be natural looking don’t we?). I am using @theisleofparadise dark water – note how easy it is to apply to your back, the good old twist and bend (insert euphemism). Wet the skin as much as you like and blend in using an applicator mitt. I wanted a bronzed tan that I can top up before a trip next week, but if you want to go super bronze just soak the skin more. Add micellar water to a make up wipe and remove the tanning water from your palms, fingernails, in between fingers and brows. Using a dry face cloth, buff in moisturiser to your wrists and outer finger and thumb and if like me you have a beard, buff off excess tan. In a hurry? Dry ON COOL using a hairdryer. Allow 4-6 hours to develop or go to sleep in it (I did here) and shower. I develop more after showering (some of us do) and go get your glow on. Happy Tanning! XX