Celine Dion reminded us all of why she is the reigning queen of pop at Sunday night’s Billboard Music Awards in Las Vegas when she took the stage to sing the anthem of anthems, “My Heart Will Go On” from the Titanic soundtrack, in honor of the film’s 20th anniversary.

Even more jaw-dropping than her incredible performance, however, was the incredible gown the singer was wearing. With its beautifully sculptured sleeves and plunging v-neck and embellished bodice, the Stephane Rolland creation, selected by Dion’s stylist Law Roach, was a powerful, soon-to-be-iconic style statement.

We caught up with Roach to find out just how the moment came together and why it (almost) goes down as the stylist’s favorite of Dion’s looks so far.

How did you come across this gown?
This time, my team and I looked to designers that I haven’t worked with before. Stephane Rolland was a designer that I’ve never had the opportunity to work with, but I figured his gowns are always showstoppers, so this might be a great time. And we reached out and they were really excited about the possibility of dressing Celine, so they sent two gowns, and in addition to those two gowns I secured about 13 more. So we took 15 to Vegas for a fitting.

But when I saw that particular one, I knew in my heart of hearts that that was the dress. Literally, if someone were to ask me to describe Celine if she was a gown, it would be that gown. It was elegant and it was strong and sophisticated but dramatic and a bit emotional in a way. So I hid it from her on the rack and let her try on maybe four or five others, and when I took that one off the rack and I handed it to her, she was just like, “What is that?” She was so excited when she tried it on and she walked out of her dressing room and looked in the mirror and was like, “Wow!”

I know her face, I know that she really lights up when she really loves something. She was like, “No more. This is it.” It fit perfectly, we didn’t need that many alterations. It was amazing and I literally cried last night, I’ve never been so proud of my work before. I’m so happy and I just feel so blessed to have been a part of that.

Describe when you first saw the dress.
It’s from his most recent couture collection and I saw it in the lookbook that they sent. And you know, sometimes things look amazing when they shoot it and Photoshop it and it goes through that whole process, but that doesn’t always translate on a real body in real life.

But when I got it in my studio and unpacked it, it was just like, “Wow!” 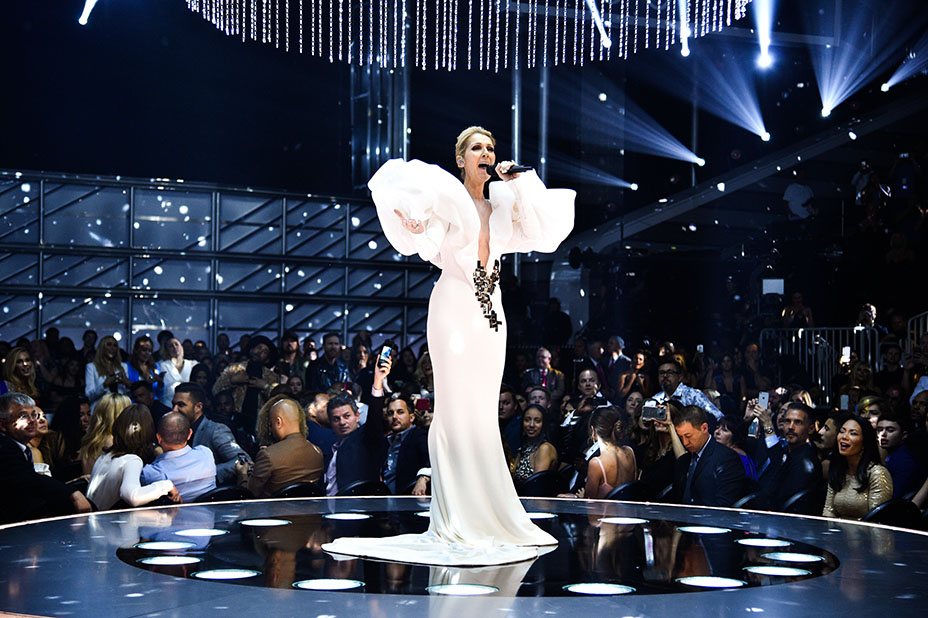 Was there a special method of transportation from Paris?
Oh, yeah, it came in a huge box. The sleeves were packed up with tissue paper — it’s a whole thing, for real.

Is there anything that you do to help make sure she doesn’t get lost in the gown, or in this case, in those sleeves?
I don’t think it’s possible for her to get overwhelmed by the dress. That woman can wear clothes. She can literally wear, and will wear anything. But the biggest pleasure for me working with her is that she has no fear. She’s not going to wear anything inappropriate, but she’s not really one to worry about what the critics will say, or what the press will say the next morning. If she loves it, she loves it. She doesn’t care. That for me is so powerful. I don’t really have to do anything but bring it to her — my job is to find it, bring it, fit it and she does the rest. I do weigh in on hair and makeup, and I bring the accessories, but other than that it’s all Celine.

You have officially been working together for one year. How was your relationship grown over the last 12 months?
I think after the first few days in Paris [Couture Week 2016], she kind of trusted me. And she doesn’t give me a lot of instructions, and she doesn’t give me that much input prior to the fitting. Of course after the fitting she tells me what she likes, but she kind of just lets me do my thing and it’s been that way since Paris.

It’s definitely a relationship built on trust, you know, I’m holding the image of one of the biggest music icons in the world and she trusts me. We knew this performance was coming for the past month, and we never had any calls to talk about it.

Is this your favorite look you’ve ever created for Celine?
Maybe. I think that her in that Vetements sweatshirt and just jeans coming out of Paris — that was an iconic fashion moment, but this one was just so emotional for me. I don’t know how I can compare it to anything.