Guests wanted to stomp and cheer at Thursday night’s Center Dinner, the annual event that raises funds for New York’s Lesbian, Gay, Bisexual & Transgender Community Center. Times have been tough for the nonprofit since the 2016 election. “We’ve been under attack a lot,” said executive director Glennda Testone. So the close-knit group of activists seemed to need this moment at Cipriani Wall Street.

“It’s never been more important to support the LGBT community — we don’t want anyone’s rights taken away,” said CNN’s Don Lemon, looking crisp in a gray flannel suit from Fokke de Jong’s Suitsupply. He had hoped to stay for most of the evening, until his producers called to say they needed him early in the studio for yet another cycle of breaking news. “That’s every day now. You have to just roll with it. But I want to find the time to be here, because it matters.”

Lemon’s schedule is so slammed that he wasn’t quite sure who was listed among the night’s honorees, but he was not among the majority on that score. Several attendees were ebullient over the possibility of meeting Anna Wintour, who was receiving the night’s Visionary Award. “Recently I’ve started thinking about fashion and the role it plays in my life, so of course you think about Anna Wintour and her influence,” said The Flash’s Keiynan Lonsdale, this year’s winner of the Youth Advocacy Award. To commemorate the moment, he had his first suit custom-tailored for the occasion, a white dinner jacket with black lapels, paired with black tuxedo pants. “I can’t remember the name [of the designer]. Someone yesterday also asked me what I was wearing; I have to get better about knowing that,” the 26-year-old actor said.

Peter Som, Brandon Maxwell and Laura Kim of Monse and Oscar de la Renta were among the designers who attended; Broadway producer Jordan Roth (his latest is the just-opened Angels in America revival at the Neil Simon Theatre) was selected by Wintour as her award presenter, and he chose a floral Alexander McQueen tux very much with her in mind. “McQueen is a designer who we both have a great love for, and we also both share a love of gardens, so I wanted to bring her a full floral tribute,” Roth explained. How does one craft an introduction that will satisfy the expectations of the often-intimidating Vogue editor? “I went through many drafts,” he admitted. “I really wanted to express how much I love her and how much she has meant to my life and to so many people, many of whom she’s never met. Her advocacy, her activism, and her philanthropy affects so many of us, and that’s an extraordinary thing to celebrate.”

Wintour, in a floral Prada dress, received the first of the night’s many standing ovations as she accepted her award, and it wasn’t difficult to read between the lines of her speech. “Bad attitudes start at the top,” she said, pausing just long enough for the audience to acknowledge with its applause that she meant the POTUS currently residing in the Oval Office. “But generational change is coming. I believe with all my heart that we’re headed toward a brighter moment than the one we’re living through right now, a future where everyone is accepted for exactly who they are.” 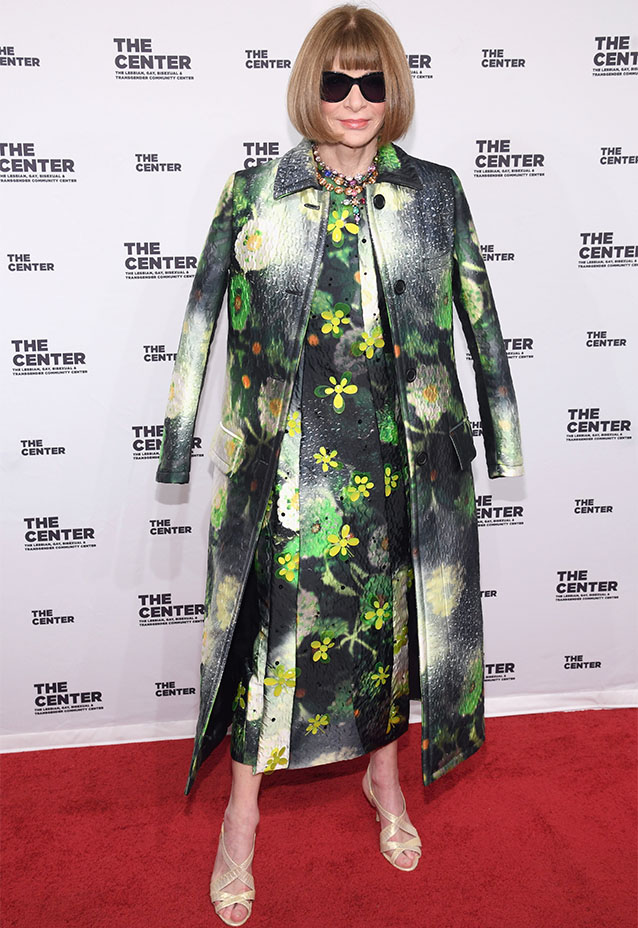 Wintour was a devout supporter of Hillary Rodham Clinton during the 2016 presidential race — telling The Hollywood Reporter the night prior to the historic vote, “I’m 100-percent positive we’re going to see Hillary Clinton in the White House in January” — but Thursday night she showed no signs of disappointment over the election’s outcome. Instead, she seems more galvanized than ever. “This is a moment of upheaval in America and the world, but it’s a moment of opportunity as well, especially for those with the vision and courage to stand for what they believe in,” she said.

As she spoke, she undeniably was thinking of one her fellow honorees. Indeed, while many were excited about Wintour’s appearance — “You know you all dressed for her,” Roth joked during his introduction — the night’s lengthiest standing ovation went to Emma Gonzalez, the 18-year-old Marjory Stoneman Douglas student who has been thrust into the high-wattage role of activist since the Feb. 14 shooting that killed 17 people at her high school in Parkland, Fla. 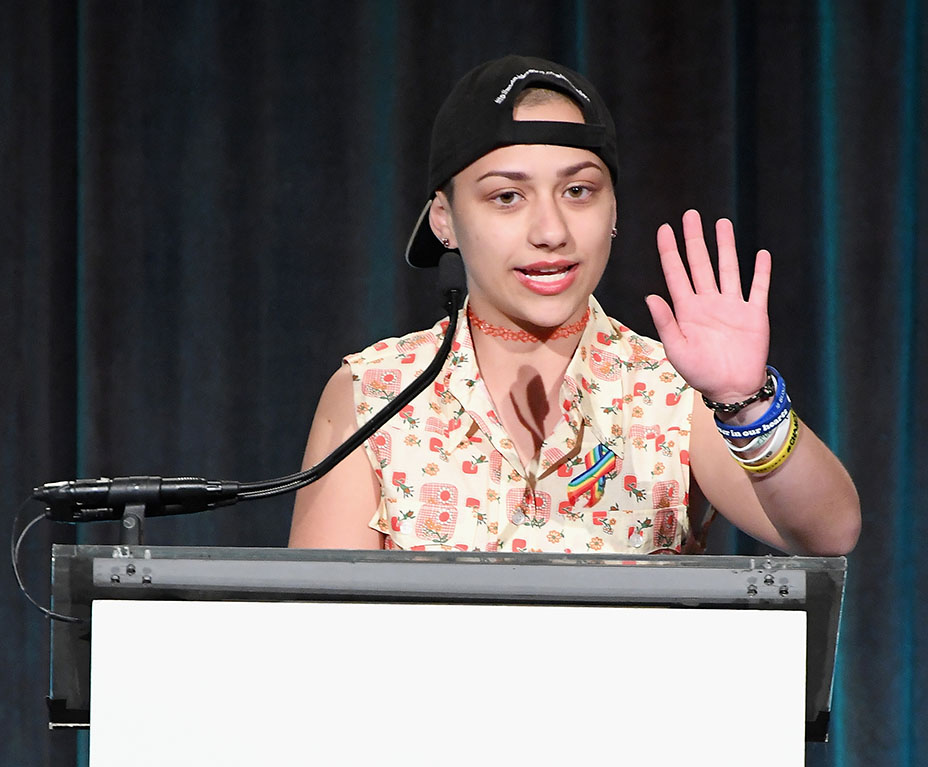 Gonzalez talked about her journey since coming out while in the ninth grade and her activism as president of her school’s Genders & Sexualities Alliance club during her senior year. “I gave lectures to all the other students in the club, spilling all the tea on everything the American education system doesn’t even touch on,” she said, noting that the goal was for all students to understand “gay isn’t a bad word, dresses and makeup aren’t just for girls, and just because you’re at a high point now, it doesn’t mean you weren’t a rock bottom yesterday.”

The night wrapped with the presentation of the Trailblazer Award to Ricky Martin, who hinted about the years of speculation that surrounded him before he came out in 2010. “It took me a minute to come out, but I swear I could come out over and over again, because it felt amazing to come out,” he said. “The amount of love I felt immediately, and I know I was lucky, because it’s not the same for all of us.” 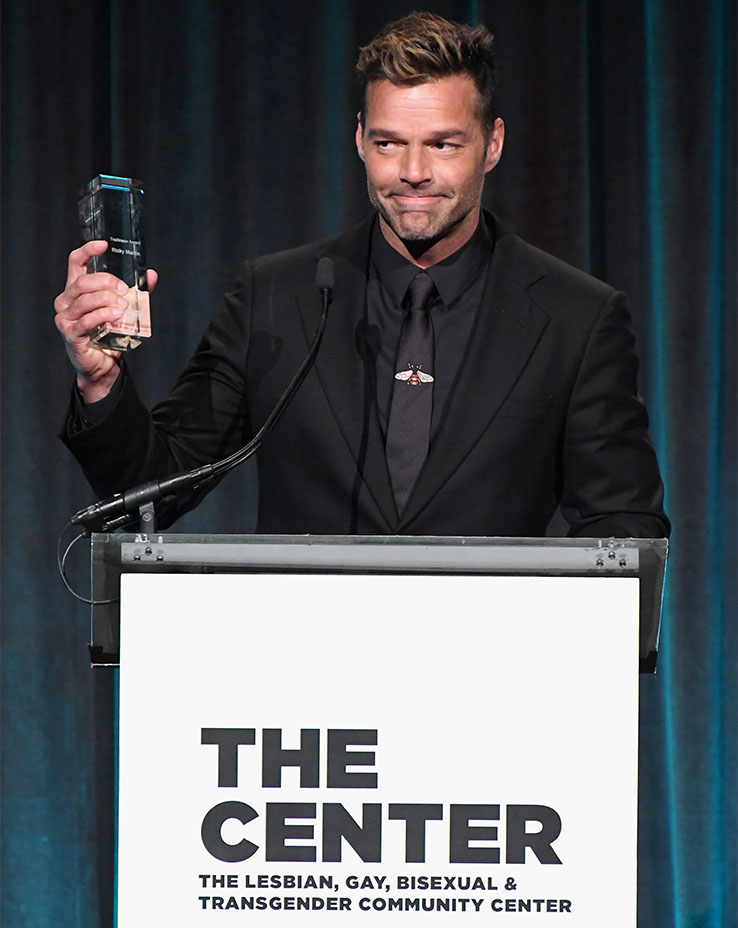 Such speeches laid the groundwork for Testone’s request for donations to cover such services as the center’s Lift Institute, which trains therapists to work with families if problems arise from a youth coming out. Requests for donations for a new program to promote voter registration also prompted a slew of hands in the air. “Is that an entire table? Is that HBO?” Testone said of one front-row group (the cable network was among the event’s sponsors). By night’s end, Testone estimated that the event raised more than $1.6 million for the Community Center.