From luxury fashion houses to designer vintage boutiques, Hollywood stylists have no shortage of options to pull from this awards season. Ahead of the Emmy Awards this Sunday, insiders have yet another red carpet wardrobe source to consider, should they need a luxe, last-minute look: the new Los Angeles showroom of Chicago-based entrepreneur Janet Mandell‘s high-end fashion rental service.

After testing the West Coast waters with an invite-only pop-up in mid-June, Mandell’s eponymous showroom (formerly named By:Fashionaholic after the fashion and lifestyle blog she founded in 2013) is moving into a permanent 1,500-square-foot space within a private residence in West Hollywood. Beginning Friday, clients can pull from an incredible treasure trove of pieces — worth $2.3 million in total — such as Chanel tweed suits, dresses, bags and fine jewelry; a crystal-embellished floral silk dress by Giambattista Valli (the designer’s tulle-powered collaboration with H&M is also on offer); and a feathery satin gown with a mesh bodice from Gucci’s fall 2013 runway collection. 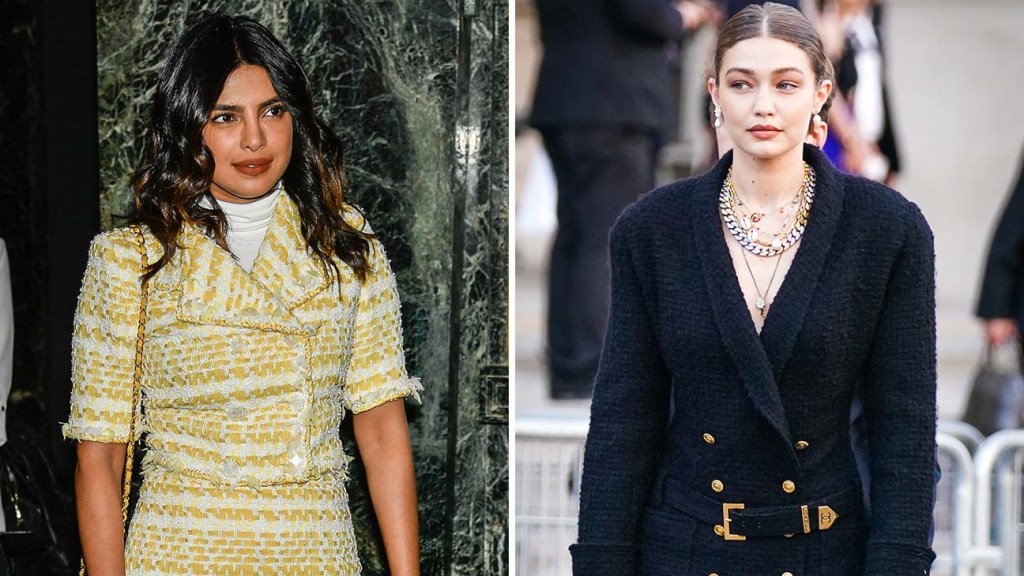 Rounding out the offerings are footwear and accessories, such as strappy heels by Stuart Weitzman, Manolo Blahnik and Jimmy Choo; vintage necklaces by Van Cleef & Arpels; and sparkling clutches by Judith Leiber and Saint Laurent. Items can be borrowed on a weekly basis, with pricing ranging from $200 for handbags, $250 to $350 for cocktail dresses, and $500 for gala-worthy gowns.

Top Hollywood stylists such as Mimi Cuttrell (whose clientele includes Priyanka Chopra, Ariana Grande and Gigi and Bella Hadid), Monica Rose (who dresses Chrissy Teigen, Shay Mitchell and Chanel Iman) and Dani Michelle (who frequently borrows for Kourtney Kardashian) are fans of Mandell’s collection of show-stoppers. Her pieces are already on regular rotation with Chopra, who recently appeared on The View in a Tom Ford dress and frequently sports Chanel from the showroom, such as a head-to-toe ensemble worth $18,000 that included a yellow tweed suit jacket and skirt set with a flap bag. For the”Karl For Ever” tribute to Karl Lagerfeld at the Grand Palais during Paris Fashion Week, Cuttrell dressed Gigi Hadid in a Chanel suit from Mandell’s showroom.

When it comes to her top-tier clients, “I’m very transparent. If [a stylist] picks something, [I’ll let them know if someone] wore it last year for awards season,” Mandell tells The Hollywood Reporter. “It’s up to their discretion whether they want to proceed, [but] there’s so many opportunities and so many different [options]. We have over 3,000 pieces, so they can really go and dig keep to find something for their clients.”

Mandell’s L.A. debut also coincides with a new direction and rename of her company. “We launched By:Fashionaholic based on the thinking that we were only going to be in Chicago,” she says. “[When] I started my blog, we thought, ‘I already created a community and everybody knows who I am.’ [Now], we’re thinking long-term. Let’s say one day we decide to design dresses under our brand. If we decide that we’re going to open internationally, Janet Mandell is a more recognizable brand name, [especially] if we evolve into different categories.”

The new West Hollywood location means that Angelenos can rent the same exact outfit worn by Chopra or Gigi Hadid (who was styled by Cuttrell in a Mary Poppins-inspired ensemble comprised of a Balenciaga hourglass coat, white ruffled blouse by Lanvin, and Celine leather skirt for Taylor Swift’s New Year’s Eve bash) — so long as they wear the same size.

“We don’t carry multiple sizes. I live in Chicago and so when we started this business [there], I know how small the city is, everybody knows everybody,” Mandell says. “You don’t want to be caught going to an event where somebody [else] can have the same dress. Some people are very sensitive to that. So we started off with just having one [size] per style, which kind of works for us.”

Mandell’s collection of archive finds also caters to fashion-loving “A-level [stars who] do not want current pieces,” she says. “They want Gianni Versace, Valentino and Chanel [from] the ’90s. Even with Gucci, it has to be a collection that Tom Ford designed [for the Italian house] in the ’90s; with [Jean Paul] Gaultier, it has to be deep from the 1980s.”

That’s what sets her apart from other resale and renting services, such as Rent The Runway (which has a showroom at The Village at Westfield Topanga), designer consignment retailer The Real Real (which opened a West Hollywood flagship in 2018) and Rebag, the luxury handbag re-seller that debuted two stores in L.A. last year.

A peak inside our LA pop up! It’s been unreal!! To get on the rsvp list shoot us a DM We will be here until Saturday, June 15th – Hope to see you there!

With her L.A. opening, Mandell hopes to attract the green-minded red carpet regulars who already use services such as New York-based online platform Armarium, which frequently pops up in L.A. come awards season. (Boutiques like Decades, Entre Nous, The Way We Wore and What Goes Around Comes Around also cater to Hollywood’s vintage-loving event circuit crowd.) Per ThredUp’s 2019 Resale Report, second-hand, subscription and rental apparel and accessories comprise the fastest-growing retail categories, with the U.S. apparel leasing market expected to grow to $4.4 billion by 2028, according to GlobalData.

“We want people to understand the accessibility, but also the sustainability,” Mandell says. “The clothing that we have is so high-end and so expensive [and] we’re giving the right type of clients the access to wear them on a special occasion, and then return it. They don’t have to re-sell it or take it to the cleaner; it doesn’t have to sit in the closet. That’s really what we believe in is giving people the opportunity to wear something fabulous at a small fraction of the retail price. We’re recycling fashion, and I think that’s something that most people don’t realize how important it is, especially in our world that we live in.”

KK wearing another one of our dresses! What a week! @kourtneykardash looking insane in our very own @dior pink rhinestone mosaic dress at @kylieskin launch party! Styled by amazing @danixmichelle and @krisfe_

Before launching her fashion rental service just a year-and-a-half ago, Mandell founded the high-end pet carrier line PeTote in 2001 (“That was when Paris Hilton was carrying her dog everywhere,” she says), followed by Mia Bossi, a luxury convertible diaper bag label, in 2005.

“One day this idea came out of nowhere, and I was thinking, ‘I’m buying all of these dresses for one event. Why am I spending all of this money?’,” she tells THR. At her husband’s suggestion, Mandell began renting her one-of-a-kind luxury dresses from her own closet to friends in the Windy City and beyond. “Our revenues were amazing the first year. We didn’t have a website and it was all word of mouth; we didn’t have to spend tons of money on marketing [and clients found us] through Instagram.

Mandell recently relaunched her website where clients can browse inventory, rent pieces online and book an appointment with a stylist in the Chicago showroom; soon, the L.A. location will be bookable through the site.