The premise of the new Netflix series Chilling Adventures of Sabrina is one familiar to pretty much all teenagers, past and present: A young woman straddles two different worlds as she figures out her path in life.

Star Kiernan Shipka’s titular heroine has a very specific reason for feeling out of sorts with societal expectations — she is, after all, a half witch — so it makes sense that her inner struggle is reflected in her wardrobe choices.

Sabrina and the other characters’ costumes also toy with the idea of anachronistic time and space, even if the show is set in our current time of group texts and Snapchat. Costume designer Angus Strathie (Moulin Rouge!, A Series of Unfortunate Events) says he and his team adhered to director Lee Toland Krieger’s vision from the first episode that the show’s setting, the fictional town of Greendale, “is in eternal autumn.” He adds that, although they weren’t doing a straight-up period drama, “we were informed by the ‘60s and this timeless, country America feeling.”

Sabrina’s inch-wide headband seems to be one of her favorite accessories and letterman’s jackets are prevalent on screen because, as Strathie puts it, “you can’t do an American high school without the letterman’s jacket.” But the halls of Greendale’s Baxter High are also filled with suede jackets, fitted turtlenecks and worn denim that, when moving together, look like a venerable fall foliage of burgundies, browns, greens and oranges that harken back to an era when students marched to burn their bras or their draft cards.

This isn’t the same for her home life. Sabrina’s aunts — Miranda Otto’s controlling Zelda and Lucy Davis’ doting Hilda — are several hundred years old. Each has amassed quite the wardrobe. 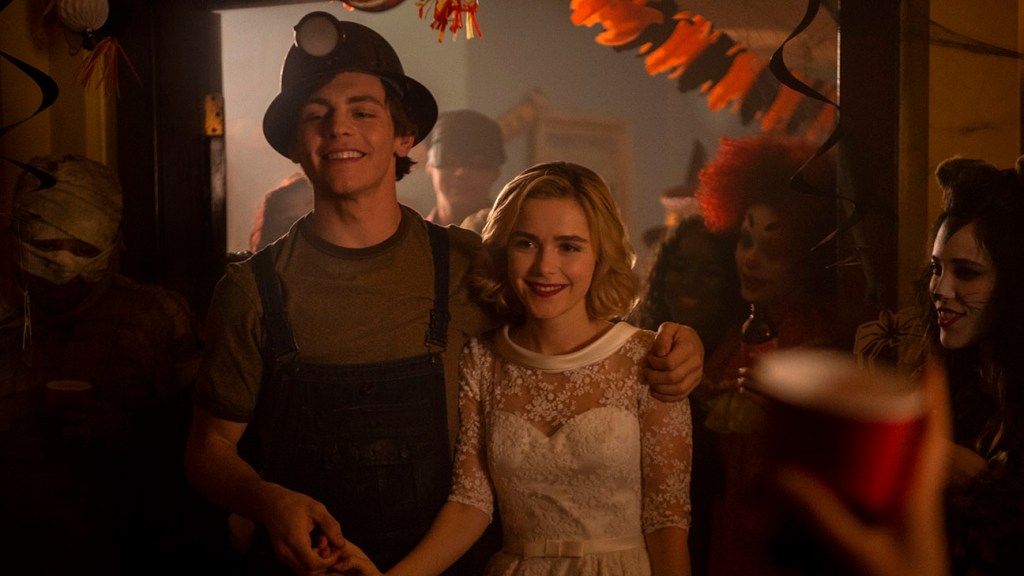 “Zelda’s clothes are very much ‘30s, ‘40s and ‘50s because there’s a timeless elegance to that,” Strathie says, adding that she also wears a lot of furs because he likes the idea that something died in the process of dressing her. Her sister has a much more Mother Earth vibe, so Strathie used lots of greens and floral prints.

And then there’s Ambrose (Chance Perdomo), Sabrina’s cousin who starts the series under house arrest after a prior transgression evoked the wrath of their coven. Like anyone who works from home, he has a penchant for pajamas and dressing gowns —albeit finely tailored ones, as Strathie says he drew inspiration from “Jimi Hendrix and early ‘70s cool.”

The color red, for the most part, is saved for Sabrina. The character wears a covetable crimson coat for the majority of the show that Strathie says is a reference to Little Red Riding Hood: “A lot of her scenes are in the forest and outside and we really wanted her to pop in the landscape.” 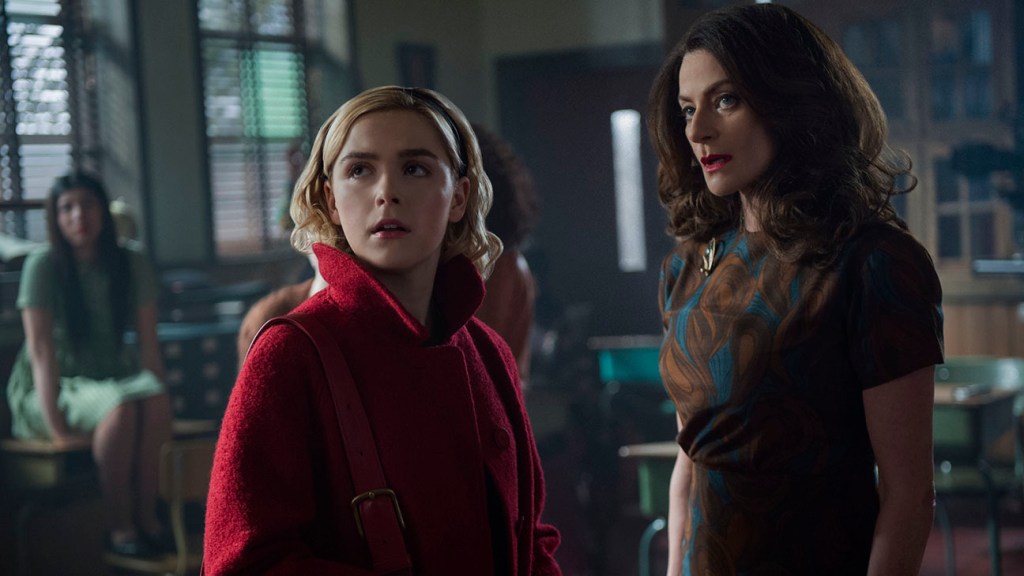 Sabrina also has given Strathie license to make a few political/social statements with his costume choices. One of the characters, Sabrina’s friend Susie Putnam, is played by non-binary talent Lachlan Watson and Susie’s personal struggles with how the world sees and treats genderqueer or questioning people is a plot point.

“This is a young person who feels out of sorts of the role that she/he is in and has clothes that make them feel uncomfortable,” Strathie says, adding that this is something he and Watson discussed. “As the show progresses, Susie goes through a transformation and ends up feeling more comfortable.”

Given how thought-out the show’s costumes are, it should be noted that there is one place that Strathie most certainly did not seek inspiration: Sabrina creator Robert Aguirre-Sacasa’s other immensely popular high school drama.

“I don’t watch Riverdale,” he says. “It was never an intention of mine to be anything like Riverdale.”