In April, during coronavirus stay-at-home orders around the world, Chris Hemsworth’s 1-year-old Centr fitness app grew its audience by 300 percent, adding hundreds of thousands of users. On YouTube, average daily views of content with “workout at home” in titles shot up more than 200 percent from March 15 to 30 compared to the rest of 2020. Workout gurus are adjusting to the changes in the world as people stuck at home look for ways to stay motivated, fit and healthy. “During quarantine, one of the things we can control is self-care, so focusing on fitness and well-being couldn’t be more important,” says Jillian Michaels, founder of the Jillian Michaels Fitness app. “People are overwhelmed and thinking about getting a workout in your living room can seem a bit daunting, but I promise you it’s super simple and can be very effective if done right.”

Here’s the gear that trainers say is helpful to have at home, plus ways that Hollywood is working out now. 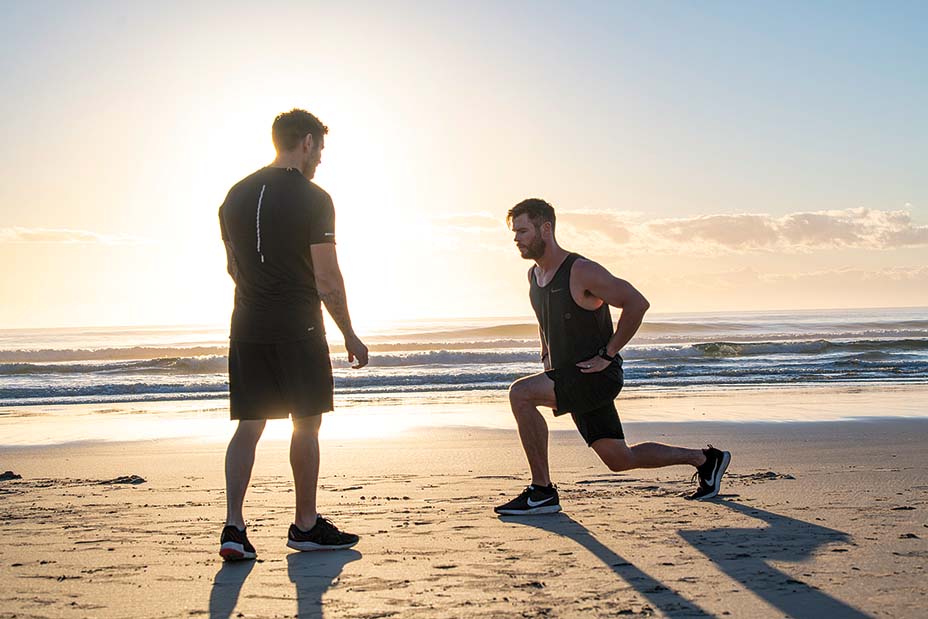 Most trainers say effective workouts can be done using body weight alone. “Your best tool is your own body,” says Michaels. “Bodyweight training is highly effective and arguably the most functional way to train by far.”

However, “if I was to select my ideal home survival kit,” says Rob McGillivray of West Hollywood’s Retrofit gym (producer Michael Lombardo and Pose actor Angel Bismark Curiel were spotted working out there pre-pandemic), which has launched an at-home YouTube workout series, “it would include a pair of Bowflex adjustable dumbbells, a 65-inch fitball — which doubles as a support bench — medium-to-heavy Spri Xertube resistance bands and a jump rope, which is a great, inexpensive and contained cardio alternative to the pain of the Santa Monica stairs.” A mat to cushion knees and spine is also advised. “If you don’t have one, a few towels will work,” says Michaels. But there are also ways to get creative with what’s already at home. “You can fill a backpack with books and do a lot of stuff with that,” says Phil Dozois of Pasadena gym Breakthru Fitness. 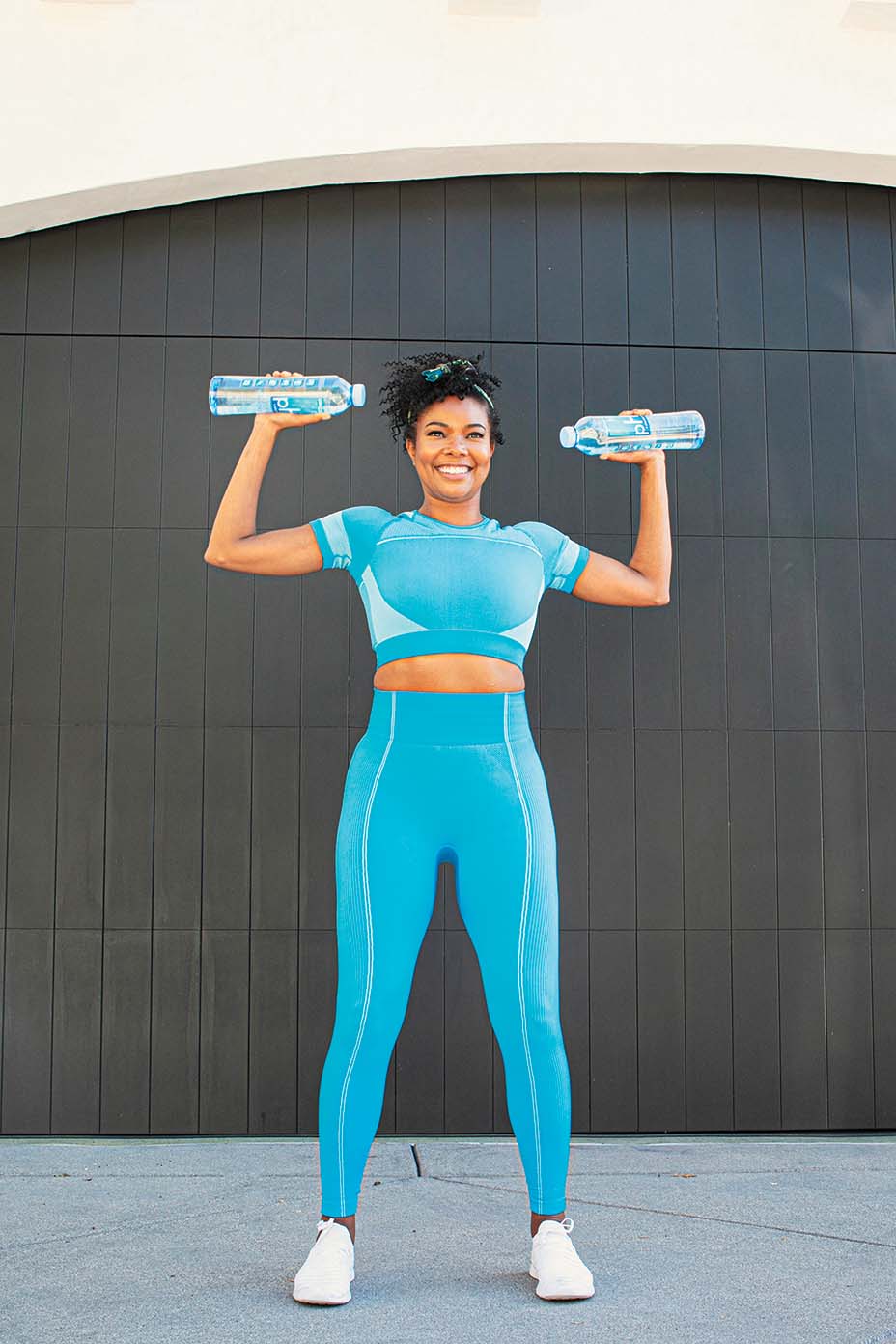 Among the many apps available — from Tone It Up, Nike Training Club and Crunch Live to Sculpt Society and Down Dog — one of the most popular recently is Hemsworth’s Centr, which offers workouts, healthy-eating plans and guided meditations for kids read by director Taika Waititi ($30 a month with seven-day free trial). FitOn, a free app, has partnered with actress Gabrielle Union on content, who has done workouts with water bottles in lieu of weights. The be.come project app is finding a following in Hollywood as well — fans include Younger actress Molly Bernard — for its approach that welcomes and celebrates all bodies. Its founder and CEO is LGBTQ+ activist Bethany C. Meyers, whose spouse is actor Nico Tortorella.

Is it counter productive to play freeze tag in a warm up? @220kid @gracey #DontNeedLove ??60min Sweat Sessions on @bootyarmyapp ??Backup Booties @haleyjordan12 @cameronmoody ??Use #BestOfBooties when you post yourself doing this dance to be featured!

There are thousands of options on such platforms as YouTube, TikTok (where Jane Fonda recently brought back her ’80s workout as a way to draw attention to her climate-crisis activism) and Instagram Live (a place to catch videos from Barry’s Bootcamp; Aarmy’s Angela Manuel Davis, who trains Beyoncé; Modo Yoga LA; choreographer Ryan Heffington; and Damon Bell, who trains Queer Eye’s Antoni Porowski). Among the trending sites on YouTube are Yoga with Adriene (whose relatable style has gained her 7.2 million followers), Blogilates, founded by Cassey Ho, who sometimes subs wine bottles for weights (5 million followers), and The Fitness Marshall (2.5 million). The latter is helmed by 27-year-old Caleb Marshall, who, before stay-at-home orders, shot in Griffith Park and now produces his indelibly campy dance workouts at home in North Hollywood. He sees his calling as being “Richard Simmons and Britney Spears combined” and asks his fans, who include Property Brother Drew Scott, to “get silly and just go for it. It’s a way to help people find a little bit of joy in a really hard time.”

Happy Easter! Since most of us are missing out on big family gatherings right now, how about you do a family zoom call and suggest a group workout!? The idea of this one will make em laugh at first…but after a minute…it will make em cry. TRY WINE BOTTLE ARMS! Go! Full video on Youtube.com/Blogilates (bio link) #blogilates

Contact almost any neighborhood gym and it’s likely that they have trainers available for private virtual workouts, often at a reduced rate. Tom Payne, who stars on Fox’s Prodigal Son, is working out every other day with his trainer Tom Fitzgerald via Zoom calls. “He’s helping me keep to a regular routine and steadily increasing the challenge. Sticking to a routine gives some semblance of control in this unsteady time,” says Payne, who, “as soon as the lockdown happened,” outfitted his home in L.A. with a weight bench, medicine ball and even gymnastic rings. 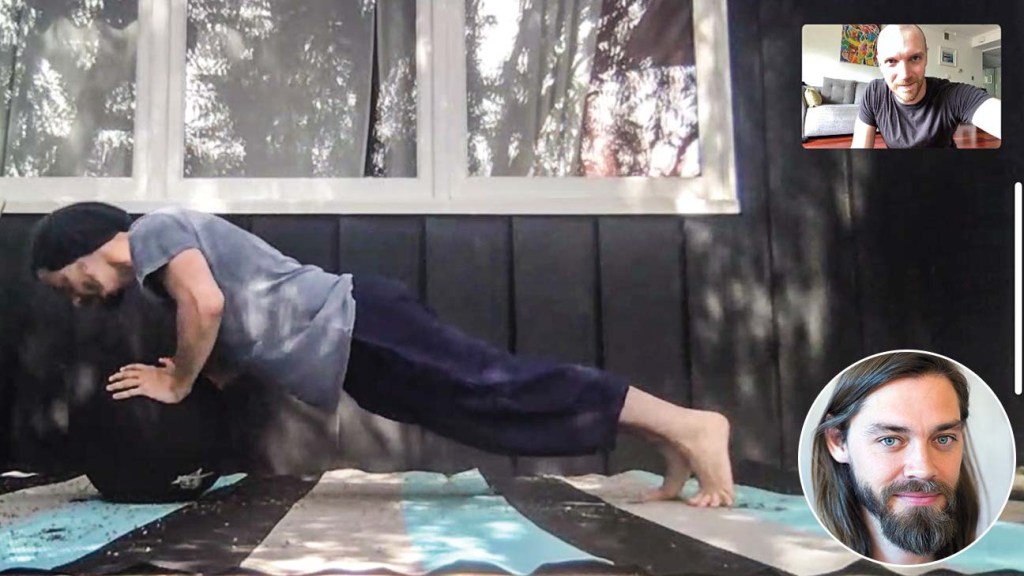 According to a spokesperson for the Mind Body booking app (which has pivoted to virtual offerings), among the L.A. gyms that have seen a significant increase in signups for group classes — done on Zoom — are One Down Dog yoga, Breakthru Fitness and Cypress Park’s Everybody. One thing that they all have in common: a community approach, with things like open-mic time at the beginning of classes. “It’s a close-knit community,” says writer-director Courtney Hoffman of One Down Dog, “and going virtual, they’ve replicated that feeling of connection.” Adds Everybody founder Sam Rypinski of the studio’s Zoom classes ($5), “There’s not the sense of isolation in the same way as when you are watching a YouTube video.”

And many people aren’t choosing just one way to get their content, but are instead mixing it up, as Superstore actress Lauren Ash has been doing. “My friends and I came up with Zoom Zumba, where we follow a Zumba class on our phones and Zoom each other on our laptops. There is a slight lag, so we are not in sync. I laughed for an entire hour watching us all flailing our arms to Shakira, and now I look forward to doing it every week!”