About 15,000 women from around the world filled Pier 94 in New York City for day two of the second Play/Ground festival from San Francisco-based media and technology company Popsugar Inc. that featured fitness classes, pulse and spirituality readings from The Yinova Center, crystal healing and a series of panel discussions. There was even a special rock-out performance from the cast of the upcoming Broadway musical Jagged Little Pill, inspired by Alanis Morissette’s album, which is set to hit Broadway this fall.

Sunday afternoon began with a “Be Your Own Powerhouse” themed discussion with Issa Rae. The creator, producer, writer and star of HBO’s Insecure sat down with the show’s co-executive producer and writer Amy Aniobi to confab about Rae’s career and life lessons as the millennial crowd spilled onto the floor.

“I’m driven by proving people wrong. That’s the Capricorn in me,” said Rae on her drive for success, mentioning how it took three years to develop Insecure. She added that there is great power in taking projects off the table that don’t inspire or motive her anymore. “I’m very honest with myself about what I can and cannot do. It is recognizing: Are you removing it because you don’t feel like you can do it? Or are you removing it because you’re feeling lazy?  If you’re feeling lazy, you need to just do it!”

When asked about her hidden talents, the polymath replied without hesitation: “None! I show off my talents. I want people to know what my talents are.” In response, the crowd let out a deafening cheer.

But directing isn’t in the cards for Rae in the near future. “When I was directing, I was stressed. I wanted to punch everybody,” she said. “Then I saw other directors, and they’re just chilling, eating a sandwich, laughing. And I was like, ‘What the fuck?!'”

Next up was Chrissy Teigen for a “Power Your Truth” panel, moderated by her star hairstylist and close friend Jen Atkin. Teigen opened up about her husband John Legend. “Marry the nerd; marry the dorks!” she advised. “We call John ‘Googy Browser.’ He’s always Googling. You can ask him anything and he knows it immediately.”

On what makes her relationship with Legend so successful, Teigen said, “We got engaged after five years, married after seven. We really took our time with things.” While people often ask if she felt love at first sight, she emphasized that was not the case: “No, we grew together. We learned each other’s personalities.” In fact, Legend was on tour the first year that they were dating so they did their own thing, said Teigen. “I never begged him to settle down. I didn’t want him to look back and have regrets. I let him do all that and now he can’t say shit.” 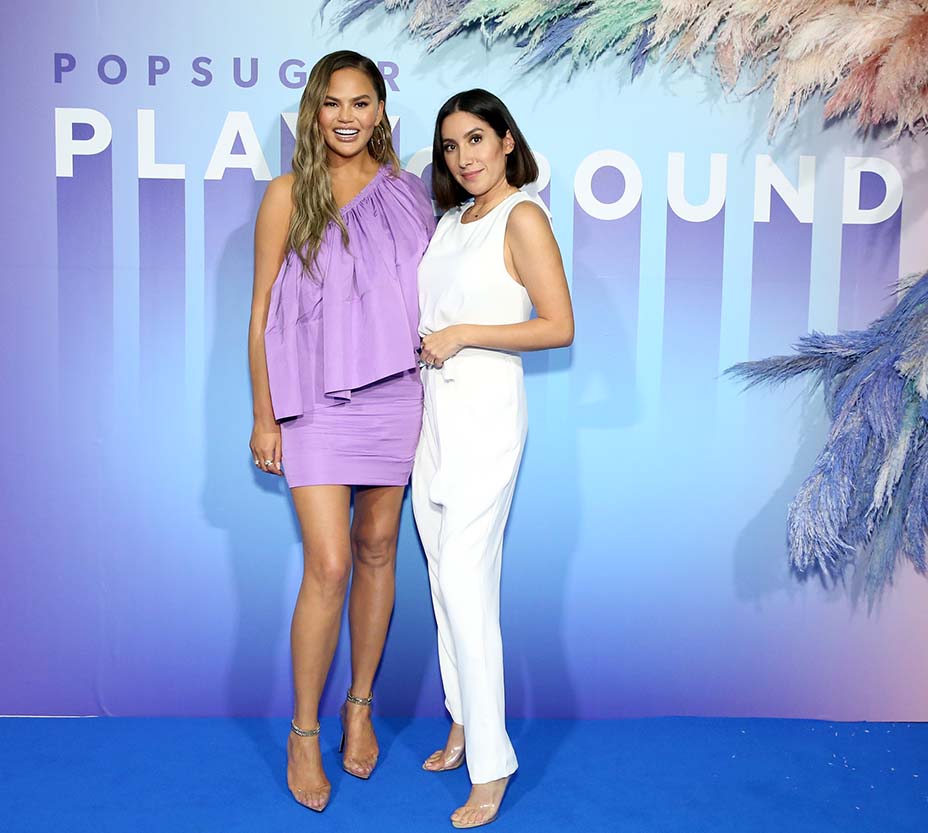 Asked if she ever felt she lost herself at all when she married, Teigen replied, “You don’t lose yourself as long you show them exactly who you are right when you get into it. To be with someone who appreciates and lets you be you is everything. I am more myself now.”

From the get-go, Teigen says she knew Legend would be a great dad. “He is very warm and loving. I knew he would be a great father to a daughter, because he has so many female friends. He has so much respect for women and treats them as equals. He’s a sensitive soul, but he’s also very business-savvy and straight to the point,” shared Teigen. “The way he speaks to our daughter is very interactive and very adult. He would wake up with me every single time I’d wake up, just so I wouldn’t feel like I was alone in it in those first two months of having a baby.”

Although she confessed to writing the “Stinky Booty” tune from the Pampers commercial (featuring the Legend family) that aired during the Super Bowl in February as well as the “Headband of the Day” song that was a social media sensation, Teigen said: “But John gets all the credit!”

As for Teigen’s small claims court TV show on Quibi, Chrissy’s Court, which is set to launch next spring, she shouted out: “Bring us your petty court cases!” When asked about being blocked on Twitter by President Donald Trump, Teigen piped up, “I’ll never know when we’re going to war.” And how much thought does she put into her Tweets? “I go for it — then I regret it. I delete posts, but years after,“ she shared.

At one point, Teigen’s 3-year-old daughter Luna, who sat in the front row, gingerly walked up onstage to sit next to her mom, who snuggled her for a moment before Luna returned to her seat. “We always make sure they’re surrounded by really good people,” she said of keeping her kids grounded. “When you’re a celebrity child, what I’ve noticed is there’s a lot of doting that happens. We try to have everyone around them make sure they show manners. We set them to standards that we were set to when we were young. We let them express themselves, but we never want them to be selfish or spoiled.”

On the importance of being relatable, especially on social media, Teigen added that she is hyper-aware of being that girl who has it all and eats pizza. “I think that is annoying. And it’s hard being that person you think is annoying, but you try to show all parts of you,” she said. “I’m happy people see parts of themselves in me. I’ve always felt more a part of your world than I have when I’m at an award show. I think when you constantly feel a little bit out of place, it’s really good.”