Lyndie Benson couldn’t have asked for a better evening to launch her new apparel line Bleusalt.

As the photographer and former actress held court Saturday night at the Malibu Pier’s Ranch at the Pier, a chill in the air gave her guests, including Cindy Crawford, Lisa Rinna and Minnie Driver, the perfect excuse to slip into any one of the ultra-soft Bleusalt pieces hanging on two clothing racks placed on a deck overlooking the ocean.

“It’s so soft,” Crawford says, wearing a sand-colored Bleusalt hoodie under a camel suede jacket. “It’s kind of luxe casual loungewear, but in Malibu you can go anywhere in loungewear. I mean, I love looking over there and seeing Lisa Rinna wearing it with heels.”

Benson lifts a corner of one of the wraps and touches it to this reporter’s cheek. One would think it’s cashmere, but it’s not.

Bleusalt is made from eco-friendly Lenzing Modal, fibers derived from beachwood trees. “It’s known as the softest fibers on earth,” Benson said. “Beachwood trees come from Austria, where they have beachwood forests. They propagate themselves. It’s a natural rejuvenation and when it’s turned into yarn and fabric, there are no chemicals in it. It’s really natural.”

As Benson writes in Bleusalt’s gorgeous coffee table book-like catalog, “I’ve always loved cashmere, but found it too hot and sticky and precious to withstand the elements at the beach. We combined the softest fibers on earth with beautiful classic styles and created a collection of luxurious pieces for your everyday wardrobe.”

Benson’s partner in the new venture is fellow Malibu resident Dana Weinstein, who has been in the apparel manufacturing business for 30 years. “I could not have done this without her,” Benson says. 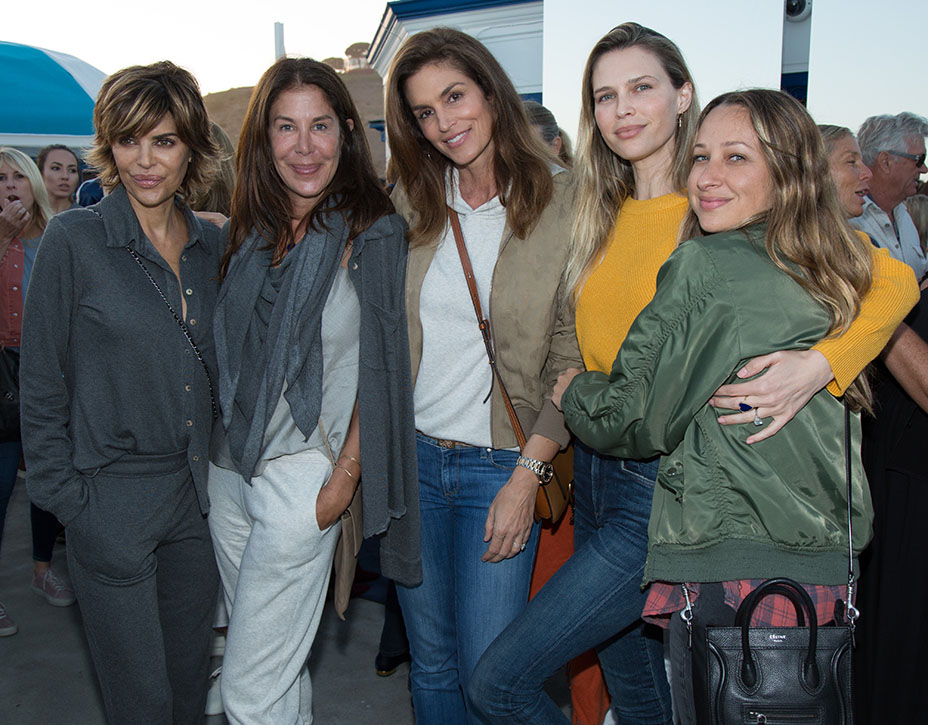 And it no doubt helps that her celebrity friends have become instant Bleusalt devotees. “I saw her pieces this summer and I thought, this is genius,” said Rinna, wearing a gray Bleusalt button-down shirt and matching pants. “I said, ‘You’ve got to do it.’ I have pieces that I’ve been living in. I travel in it. Lyndie has great style. She has an amazing energy. She’s meant to do this.”

And this may turn into a lot more. Benson said she hopes to expand her men’s collection (right now it’s limited to a hoodie and a button-down shirt) and is also thinking of Bleusalt Baby.

The sun begins to set as Benson’s well heeled crowd of friends nibble on cauliflower pizza and sip margaritas with blue-and-white-striped paper straws from tumblers rimmed with — what else? — blue salt.

“It’s fun to put on gowns, but to have great clothes that you feel good in, that are comfortable in real life, that’s the best,” Crawford said. “In a way, that’s the ultimate luxury.”