Life is imitating art for Claire Danes these days — sure, that incoming female president on Homeland may not exactly mirror real-world conditions, but Danes is fully aware that many aspects of the Showtime drama in which she stars hit close to home.

“The amazing thing about our show is that we’re reflecting what’s happening in the minute that it’s happening, and that’s challenging,” she says. “Our writers are quite gifted with that. We have a female president who’s not a carbon copy of Hillary at all; let’s face it, we thought Hillary Clinton was going to be president, but the show has been given enough latitude to adjust. Right now, we’re able to explore some interesting themes, and we’re collecting momentum as we go along.”

That awareness is among the reasons Danes turned up Wednesday evening at the fundraiser hosted by jewelry brand Gabriel & Co. in Midtown Manhattan to benefit Afghan Hands. The nonprofit organization works with widows in Afghanistan, instilling them with a skill — embroidery — used to create scarves that raise funds, while every woman in the program also receives an education she otherwise might not have access to. This was Gabriel & Co.’s first partnership with Afghan Hands, with select pieces from its collections offered alongside the handcrafted scarves, which range in price from $150 to $300 (the scarves and the jewelry are available on the Afghan Hands website).

How Women's Publications Are Handling "A Day Without a Woman" Strike

And it was no accident that the event took place on International Women’s Day, says Christine Gabriel, one of four family members who founded Gabriel & Co. “This was our first time, but it won’t be our last,” she notes. Christine was diagnosed with a rare blood cancer 2 1/2 years ago, and the quest to find a donor inspired the jewelry company to create the Gabriel Love Foundation. Afghan Hands is ultimately a beneficiary of that journey, she says. “It made me feel so good that people wanted to reach out to help me, so this is our way to give back. When you realize that you have power and a voice, you use it.”

Likewise center-stage at the event was Afghan Hands founder Matin Maulawizada, who emigrated from Afghanistan to San Francisco when he was a teenager. Today he’s an American citizen and a highly sought-after makeup artist; Danes has been his client for more than a decade. “He’s an extraordinary person,” she says. “It was a wonderful concept, and he was so personally devoted to the cause that I was very moved by that. Also, the scarves he was producing in the process, giving these women some independence and an education, were so beautiful, so I just started collecting them.” 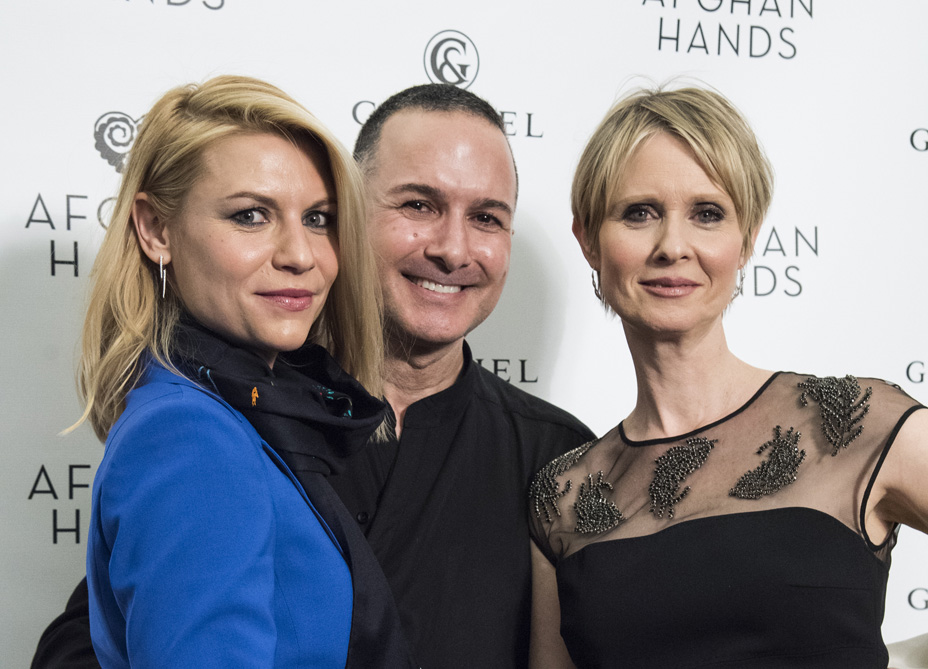 A few years ago, Danes suggested to Maulawizada that her mother, Carla, a former textile designer, might also lend her talents. “This really does go as deep as recruiting my mother’s artistry,” says Danes, who paired one of Carla’s designs with a La Perla suit in cobalt blue Wednesday evening. “It was wonderful to have her designs interpreted by this group of women so very far away, and it makes us feel closer to them. Their work is literally on our bodies. As a symbol, it’s great, and as a practical, material thing, it’s great as well.”

Guests included Amy Hargreaves, who plays Maggie, sister to Danes’ Carrie Mathison on Homeland, as well as Nicole Miller, Metropolitan Opera mezzo-soprano Isabel Leonard, Hal Rubenstein, Good Morning America’s Amy Robach and Cynthia Nixon, likewise a client of Maulawizada and an Afghan Hands supporter for the past eight years. “He just started talking to me about the school and the workshop and the lives that were being transformed, and it’s very easy to want to support that,” says Nixon.

Currently in rehearsals for a Broadway revival of Lillian Hellman’s The Little Foxes (she and Laura Linney will alternate nightly on performing the two lead female roles), Nixon has been outspoken in her opposition to Donald Trump since the Nov. 8 election. “I’ve been in a lot of marches lately,” she adds before ticking off a list that includes the Jan. 21 Women’s March in New York and the Jan. 28 protest at JFK Airport following Trump’s Muslim-focused travel ban. “My 6-year-old knows a lot of chants now. It is inspiring, and it’s great for everyone to respond, but I think there’s a special potency in a female response, given Donald Trump and who he is and his history with women.”

With so many members of the fashion industry embracing a newfound activism since Trump’s inauguration, Wednesday night’s fundraiser offered yet another example of that idea burgeoning in the face of recent events. “That’s the only good thing about what has happened: We’ve woken up and are galvanized to become more politically involved,” says Danes. “I feel like I’ve been so spoiled as a citizen. I haven’t had much reason to get politically loud, but suddenly, I do.”

Ultimately, Maulawizada says he is humbled by the response to Afghan Hands — not just by the star power that Danes and Nixon bring to his efforts, but also by the results he sees in the roughly 200 Afghan women who thus far have benefited from the program. “When I first met the women we’re working with in Afghanistan, I couldn’t see their faces; they kept their eyes on the floor, and their shoulders were hunched. I thought it was a cultural thing,” he remembers. “But a year later, they were sitting up proud, with their shoulders back and smiles on their faces. They looked me in the eye when we talked. I get chills every time I think about it. These women were changed psychologically. That’s the difference you can make. We’re giving them education and a skill, but we’re also giving them their dignity. One of the women we’ve helped now wants to be a doctor. How can you not be moved by that?”