Two women drove in from Philadelphia, while another flew from Indonesia — Vogue‘s annual Forces of Fashion conference Thursday was teeming with fans who came to New York, and paid $3,000 for the day, to hear from some of the fashion industry’s biggest names.

Titled “Forces for Change,” this year’s event featured a healthy collection of designers — from Givenchy’s Clare Waight Keller to Simone Rocha and Rodarte’s Kate and Laura Mulleavy — as well as legendary photographer Annie Leibovitz, a quartet of today’s most talked-about models, and Kris Jenner, who discussed the power of being an influencer.

Here are five memorable moments from the day:

Sitting down with Eva Chen, Instagram’s director of fashion partnerships, the Givenchy artistic director dove straight away into the information the audience wanted: her work on the gown Meghan Markle wore for her May wedding to Prince Harry. “For me it was a really extraordinary experience, and one that was quite unexpected, as I’d only been at [Givenchy] for six or seven months,” she said. “So the commission itself was really quite a moment for me, a huge thing both professionally and personally as a Brit, to be a part of British history.”

While Waight Keller wouldn’t confirm the rumors that she and Markle accomplished much of their work via text, she did allow that “it was a very discreet communication between us, and literally just us; no one else was involved, so those five months were so special, an opportunity for me to really get to know her.” 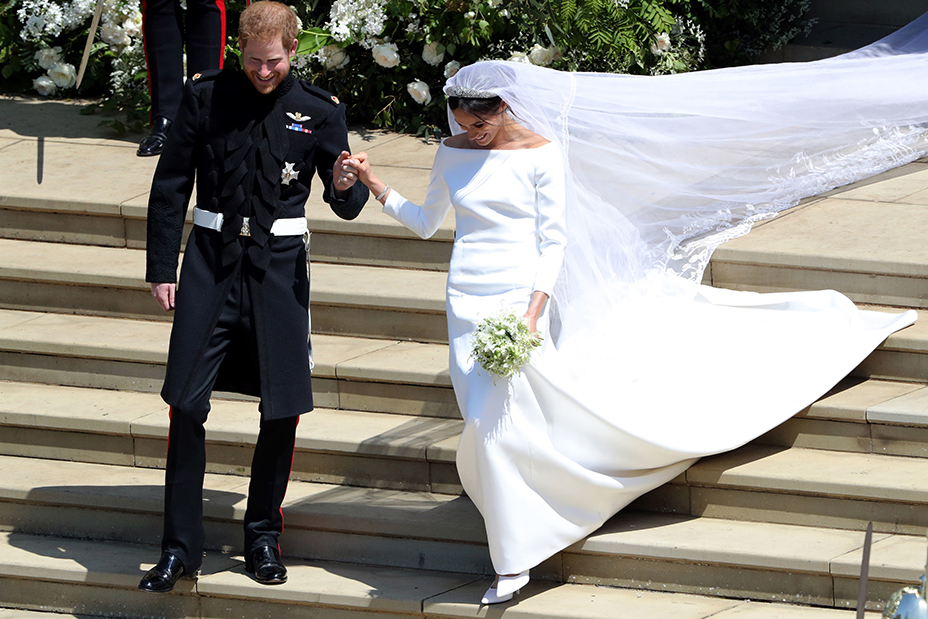 “I realized that I had to really decide with her exactly the right thing that also everyone in the world was going to watch,” Waight Keller said, noting that Kate Middleton’s Alexander McQueen gown by Sarah Burton was celebrated when it was revealed for her 2011 wedding to Prince William, but social media has only become more central to daily life in the intervening years. “So of course I had that in the back of my mind. But for me first and foremost, it was about what [Markle] really wanted.” (Less than 24 hours after Waight Keller’s talk, Markle again would wear Givenchy, this time a navy crepe dress and coat for Princess Eugenie’s wedding Friday morning to Jack Brooksbank.)

Waight Keller also touched on how social media has impacted fashion and her work, recalling the trips she used to make while at university to R.D. Franks Ltd., a now-closed London bookshop that specialized in fashion titles and magazines. “That’s how I had to discover what was going on in fashion,” she said. “The whole world is so accessible now — but what that also means is that your voice has to be so much stronger.”

The famed photographer discussed a few of her most memorable Vogue shoots with contributing editor Jonathan Van Meter, starting with “Puff Takes Paris,” the October 1999 layout that paired Sean Combs with Kate Moss. “Puff Daddy was staying at the Park Hyatt and not the Ritz,” Leibovitz explained; the former hotel’s modernity and the latter’s storied history ultimately gave her the inspiration for the story. “It became all about rap culture and high fashion and the meeting of the two worlds.” 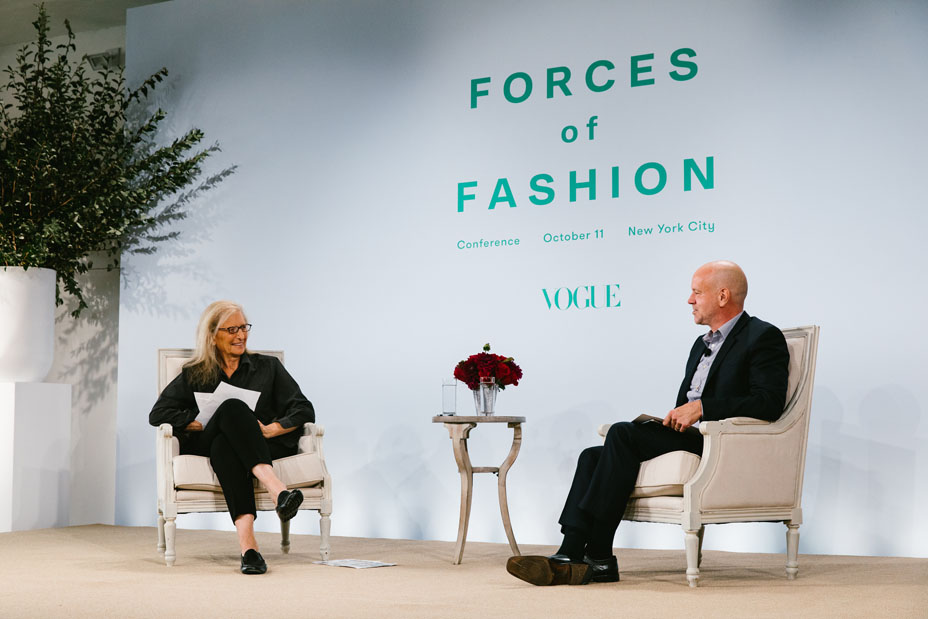 More recently, Leibovitz photographed Georgina Chapman for Vogue‘s 2018 issue to accompany a story written by Van Meter, in which the Marchesa designer discussed her life in the wake of the sexual-assault allegations against now ex-husband Harvey Weinstein; but without revealing too much, the photographer noted that she wasn’t happy with her work. “I failed on that shoot,” Leibovitz told Van Meter. “Journalistically I should have been tougher, but I don’t think I had it in me to be tougher at the time.”

And with photographers like Terry Richardson, Bruce Weber and Mario Testino subsequently facing their own assault allegations, causing Vogue and other magazines to suspend bookings with them, the #MeToo movement ultimately impacted Leibovitz’s portfolio as well. “I suddenly got a lot more work,” she said.

The actress and singer discussed what it feels like to be a role model when you have roughly 54 million Instagram followers. “There’s a duality to it, of not thinking of it as a real thing, while also realizing that I could touch a lot of people’s lives, and how many I could positively affect those lives,” she said, while also touching on the impact of another on her life: stylist Law Roach, who’s been dressing Zendaya since they met through a family friend when she was 14. “He’s like family to me,” she said. “He really has taught me to be fearless, and that if you feel confident in what you’re wearing, why does anyone else’s opinion matter? That’s what Law has helped me find through fashion.”

Of their work together, Zendaya noted that “there’s always a reference to a time period or a person or a character — for me, red carpet is an opportunity to play these different characters that I can fall into,” she said. A Joan of Arc-inspired gown by Versace, which Zendaya wore to the 2018 Met Gala in May, has been a highlight of their work together. “That felt like some real Game of Thrones shit,” she added of the medieval-warrior look. “I felt good, and that’s what fashion should be.” 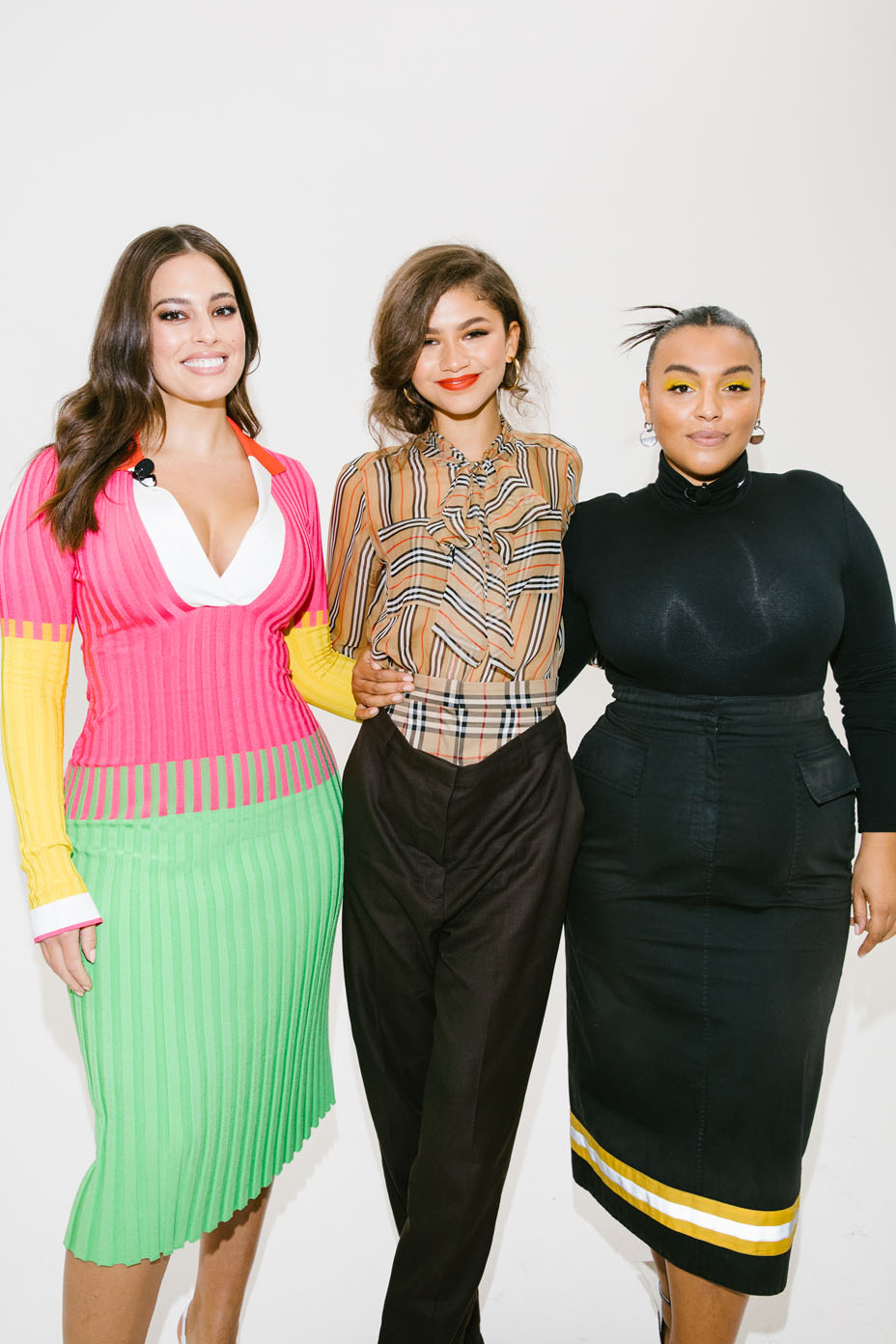 4. Kate and Laura Mulleavy dislike when this word is used to describe their designs.

As female designers, the L.A.-based sisters realized there’s a word applied to their work that’s rarely used about designs by their male counterparts. “We heard a lot early on, ‘Their work is really crafty,'” Laura said. “I always wanted to ask why that word, and I want to give them a book about feminism, because I don’t hear it about men who are designing. It’s really inappropriate at this point.”

“This is actually parallel to the current political climate: You have to be careful about language, because language will deteriorate and create people getting used to things,” Kate added. “We’re two women who did this on our own. We’re following our own path, and every day is about pushing a door open.” The Mulleavy sisters will break another barrier in November when their first solo fashion exhibition, simply titled “Rodarte,” opens Nov. 10 and runs through Feb. 10, 2019, at Washington, D.C.’s National Museum of Women in the Arts.

5. Modeling is healthier today, to a point.

Gigi Hadid, Kendall Jenner, Ashley Graham and Paloma Elsesser got into a thorough back-and-forth talk during “Don’t Label Us: The Models Reflecting Today,” with each agreeing that strides have been made in casting diversity, while working conditions have improved on sets and backstage at fashion shows — for the most part.

“New York definitely has gotten better; maybe not Europe, where it’s still surprising to me that you can be doing a show at noon, and yet you haven’t planned to feed your models. That upset me for the young models,” said Hadid, who revealed this year that she suffers from Hashimoto’s disease, which impacts the thyroid gland and can lead to weight fluctuations. 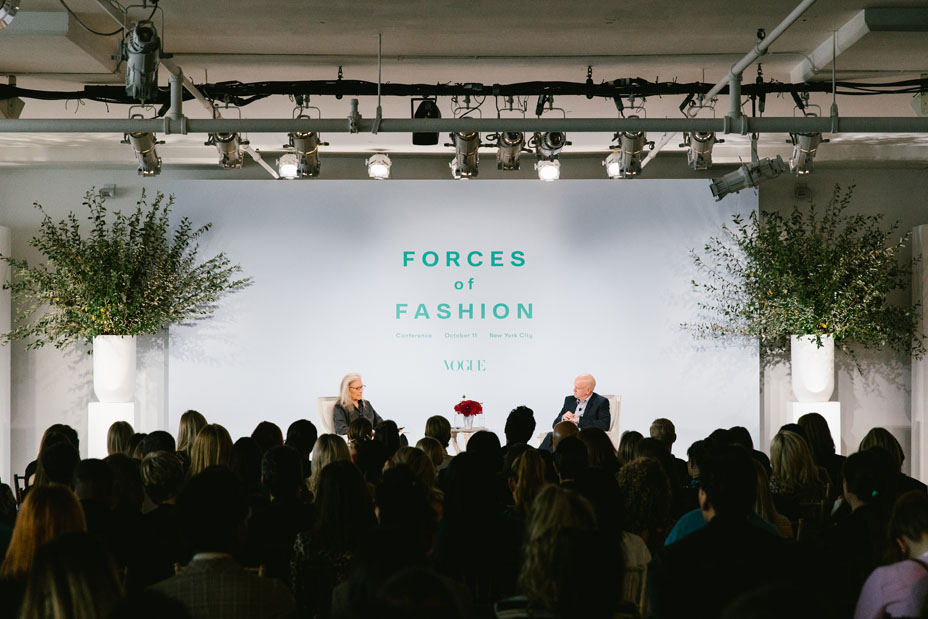 With underage models on the runway also a hot-button issue, both Hadid and Jenner support girls waiting until the age of 18 to begin working professionally, based on their own experiences. “When I look back on it, I wouldn’t have changed it for a second,” Hadid said of her mother’s decision to make her wait. “I took Instagram photos of flowers and used crazy filters, and I got to be a normal volleyball player. I wanted to work; it looked so shiny and sparkly. And even though I did start at 18, in some ways I still feel like I was too young.”

Jenner, who signed with an L.A. agent when she was 14 and wanted to model in New York when she turned 17, agreed that she, too, was happy she waited. “Everyone around me said, ‘No, we’re waiting until you’re 18,’ and I got to live as much of a normal life as I could. I went to school and had friends,” she said. “Mentally and physically, it put me in such a better place to do this.”

When asked what sort of resistance the women have encountered in the industry, Graham had a quick answer. “46/32/36; that’s a lot of resistance right there,” she said, citing her measurements. “Every day there is still resistance and tokenism for curvy women in the industry. It’s become a lot more normal, but you still encounter it. “I shot an editorial about four months ago, and a creative director told me that if I just lost this right here” — pointing to an area on her upper thigh – “then I would fit into a certain brand of clothes. And I said to him, ‘You know all this right here is part of me, right?’ So you still have to fight every day.”