Continue to The Hollywood Reporter SKIP AD
You will be redirected back to your article in seconds
Skip to main content
February 14, 2017 9:16pm

We’ll cut straight to the chase: Yes, Selena Gomez did show up to Coach’s fall 2017 presentation Tuesday afternoon, and yes, the new face of the brand appears to be as lovely in person as any Selenator could have ever dreamed she would be.

Seated front row alongside the superstar were Drew Barrymore, Emma Roberts (a longtime supporter of the label), Tavi Gevinson, model Sarah Snyder, Disney darling Sabrina Carpenter and one Anna Wintour — an English expat turned through and through New Yorker, much like Coach’s creative director Stuart Vevers.

However, whereas September’s show drew a few male celebrities, including Michael B. Jordan, there were no famous dudes in sight for the brand’s debut co-ed show, and on Valentine’s Day no less.

On the runway, Vevers continued to draw upon inspiration from the American West, which was obvious from the Route 66-at-sunset backdrop and dirt-covered runway rolling with tumbleweeds — one of which went rogue midshow, tumbling into the path of an oncoming model who artfully kicked it out of the way.

The collection was inspired by “a tomboy playing with the juxtapositions of the great American outdoors and early New York hip-hop.” And while the marriage of the two styles seemed like one destined for divorce, we should know better than to doubt Vevers, who has led the brand’s turnaround efforts and put it squarely back in the green. (The soundtrack, if you’re curious, was neither hip-hop nor folk; instead, a lengthened rendition of The Smashing Pumpkins’ “1979” played through the show.) 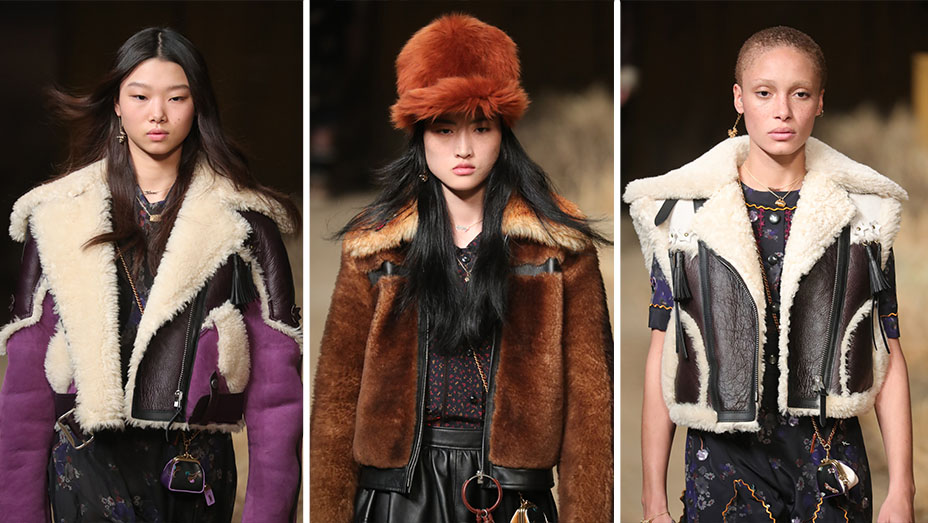 The creative director breathed new life into the shearling jacket trend by slashing coats at the waist and giving them an edgier, boxier shape that was decidedly New York in its unabashed toughness. A few versions of the jacket, however, brought in a country element with raw-edged lapels splayed open like a hides left to dry in the sun.

At ditzy floral print, which Vevers has played with quite a bit over the past few seasons, was spotted on silky frocks with ruffled sleeves and lace-trimmed yolks. The synthetic puffer jacket, also spied quite frequently on the runways this season, got the floral treatment — even for dudes. Plaids, leather tassels and childlike horsey prints commingled with shearling baseball caps, platform sneakers and graphic “Coach 1941” tees featuring the classic stagecoach logo, for a street-meets-stables look. 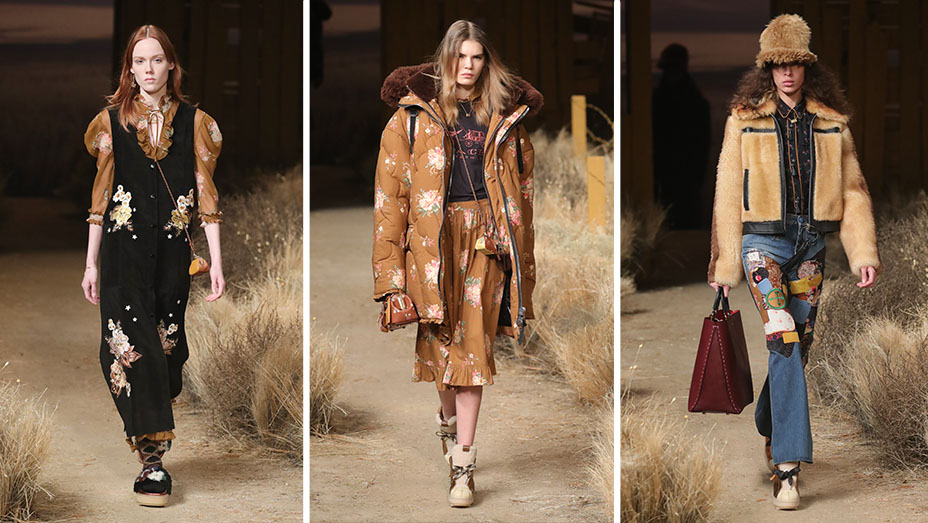 Accessories, the company’s bread and butter, were shrunk down to an adorable (not to mention, affordable) size. Miniature coin purses on skinny metal chains — one of Roberts’ favorite elements from the show — will no doubt be a popular piece among Gomez’s younger fans who are itching to get their paws on a piece of Selena-approved merch. Itty-bitty top handle bags starring “Rexy” the T-Rex, as well as a unisex sweater with a quirky duck character (a new friend for Rexy?) also are likely to be big hits.

And the miniature “Rogue” bags, also available in a duck print, are already shoppable on Coach.com. Saddle up the wagons.