Hannah Hooper of Grouplove is the first to admit that she doesn’t care about style as much as she wants people to think she does.

“I have fun with it and I don’t take it too seriously,” says the keyboardist and vocalist. “I think that’s a lot of the reason that I look crazy sometimes.” Since the L.A.-based indie rock band’s formation in 2009, Hooper has not only helped craft its lush, anthemic sound (including hits such as 2011’s “Colours” and “Tongue Tied”) but has also emerged as a fashion force, delivering high-octane performances in her signature curve-hugging bodysuits. “I had to go through a lot of ripped jeans, skirts that were too short on high stages and other moments,” says Hooper before honing in on her onstage style. 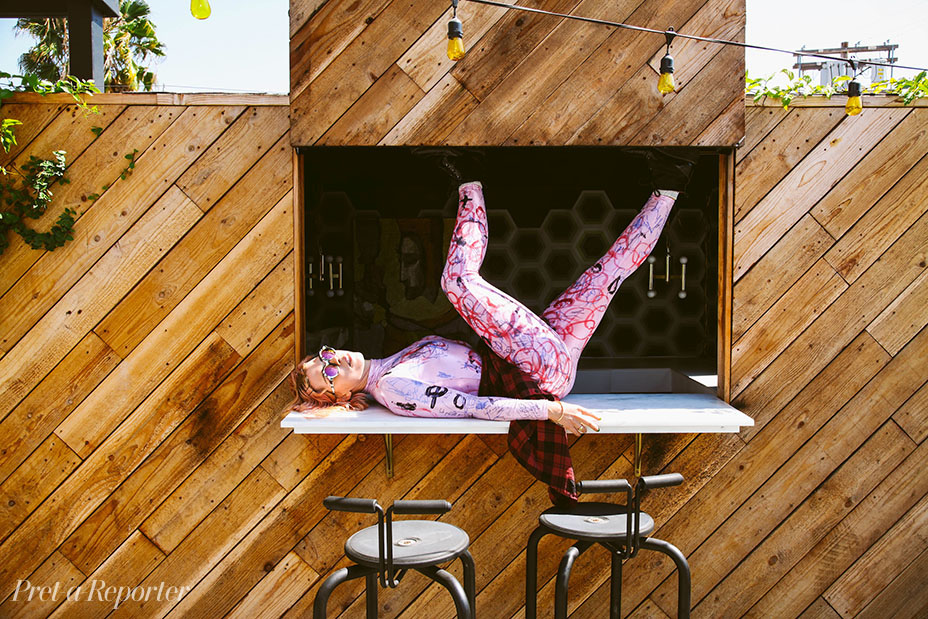 It all comes down to comfort, says the musician, whose off-stage look is decidedly more tomboy — influenced in part by the closet she shares with husband Christian Zucconi, the band’s lead vocalist and guitarist. “It’s this merging of so many influences that makes up my style,” says the San Francisco native, who was pursuing a career in art before venturing into music. “It’s paintings, and the vibe of a city and the color of my hair at the time.” And as a new mom (she and Zucconi have a one-year-old daughter), sometimes it comes down to whatever she has time to put on, “even if it looks ridiculous,” she says.

Ahead of the band’s Coachella performance on Sunday to promote their third studio album Big Mess (Canvasback Music/ Atlantic) the desert festival veteran and style chameleon opens up on everything from Rihanna to the most expensive piece she’s ever bought.

Where do you find your bodysuits?

I buy them on Etsy. Most of them are lace. I’ll get a bathing suit and wear it underneath. I find a way to make them my own — I kind of do that with everything I buy. I’ll add something to it.

You’ve spent a lot of time touring. How do you pack before you hit the road?

It’s hard. Last year we did a tour that took us everywhere from Korea to Australia, New York and Chicago. The weather changes. I do a lot of thrifting on the road. And Christian, my husband, who is also in the band — we share everything.

I have a pretty tomboy look. I think that being a little bit of a tomboy and being able to be a woman through that is really attractive. I am naturally curvy so it shows through in what I wear, but it’s also the way I carry myself. It’s comfort, but it’s about sharing clothes [with Christian].

I feel the most comfortable when I’m with Christian and we are dressed together. It’s a yin yang thing. We just naturally look right. Right now his hair is blue and green and mine is pink and yellow. He’s in these ripped jeans and oversize shirts and I am in these crazy jackets. We flow together well. Sometimes when we are separated I feel like half an outfit.

Do you ever argue over pieces?

The Raf Simons sweater, which is probably the craziest thing we have ever purchased. It’s like wearing art. I feel like it’s the coolest thing I’ve worn in my life.

How has your personal style evolved over the years?

I’ve always been tomboyish, but I have been through more themes. I was more punk in high school, then I was more skater and when I moved to New York and I got more black clothing and more sophisticated looks. Moving to L.A., I got a lot more comfortable wearing my vintage clothes and thrift clothes again. It’s a colorful city. There’s not a lot of space in New York. My wardrobe was small and I didn’t have a lot of money there and I just kind of stuck to black. I painted a lot and had a lot of splatters all over my clothes. Those were my colors. 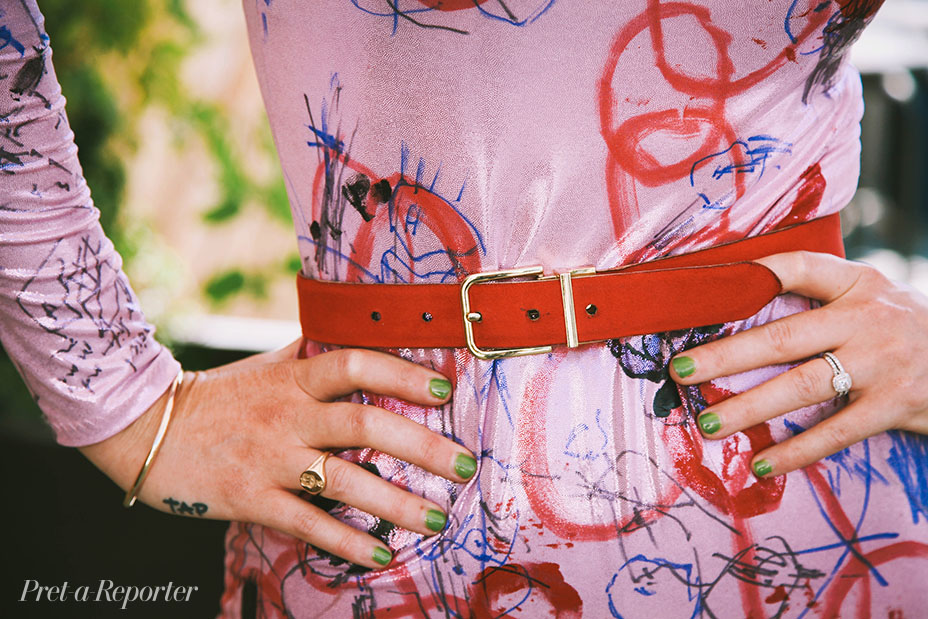 As an artist you also have a hand in shaping the band’s aesthetic.

I do everything I can for the band. I make my own outfits, I paint all our amps, I made our backdrop, I made our album cover. We definitely have our own look because my hand is on all the visual stuff. It’s handmade, it’s expressive, it’s colorful, it’s fearless.

Who are your style icons?

Sailor Moon. She is a cartoon but she is awesome. Karen O. She is phenomenal. I love Rihanna. She is just constantly changing. You can hardly keep up with her. She is bold and she tries anything. And Kurt Cobain.

Any designers you gravitate towards?

Fashion wise, I like to do whatever I can to what I find. I have to see a piece to know. It’s not a specific designer, because I have my own vision.

What’s the one piece in your closet you can never part with?

The Dieter Roth shirt. It’s on its last legs. The back is ripped. But it’s so special. He’s an artist I love, and I found it in Japan. It’s just so soft. Everything that I wear has such a story to it; these pieces have been in my bag for so many places. Everything has a crazy memory attached to it. 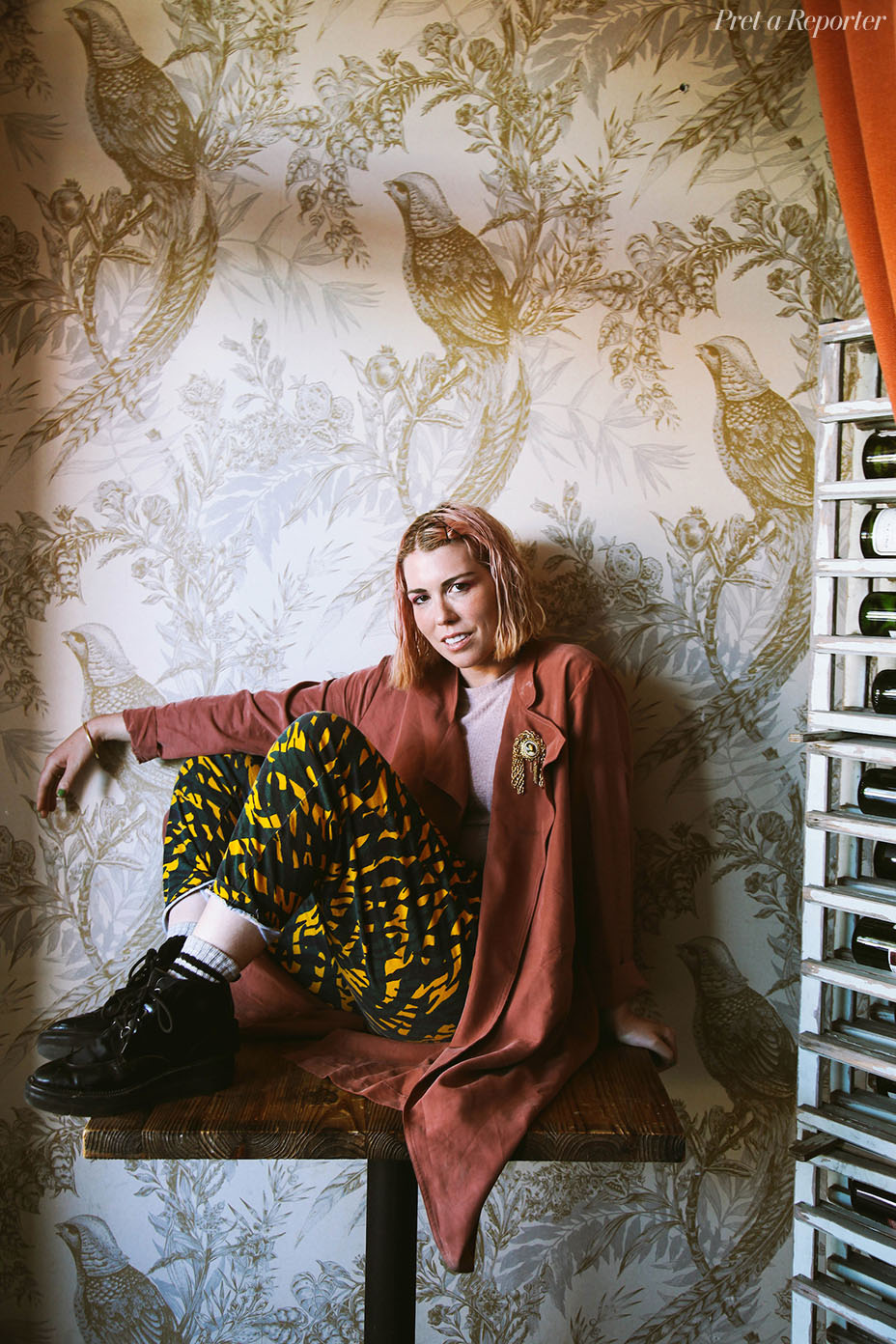 Brooch: “From some thrift shop in Chicago. I sewed it on.” 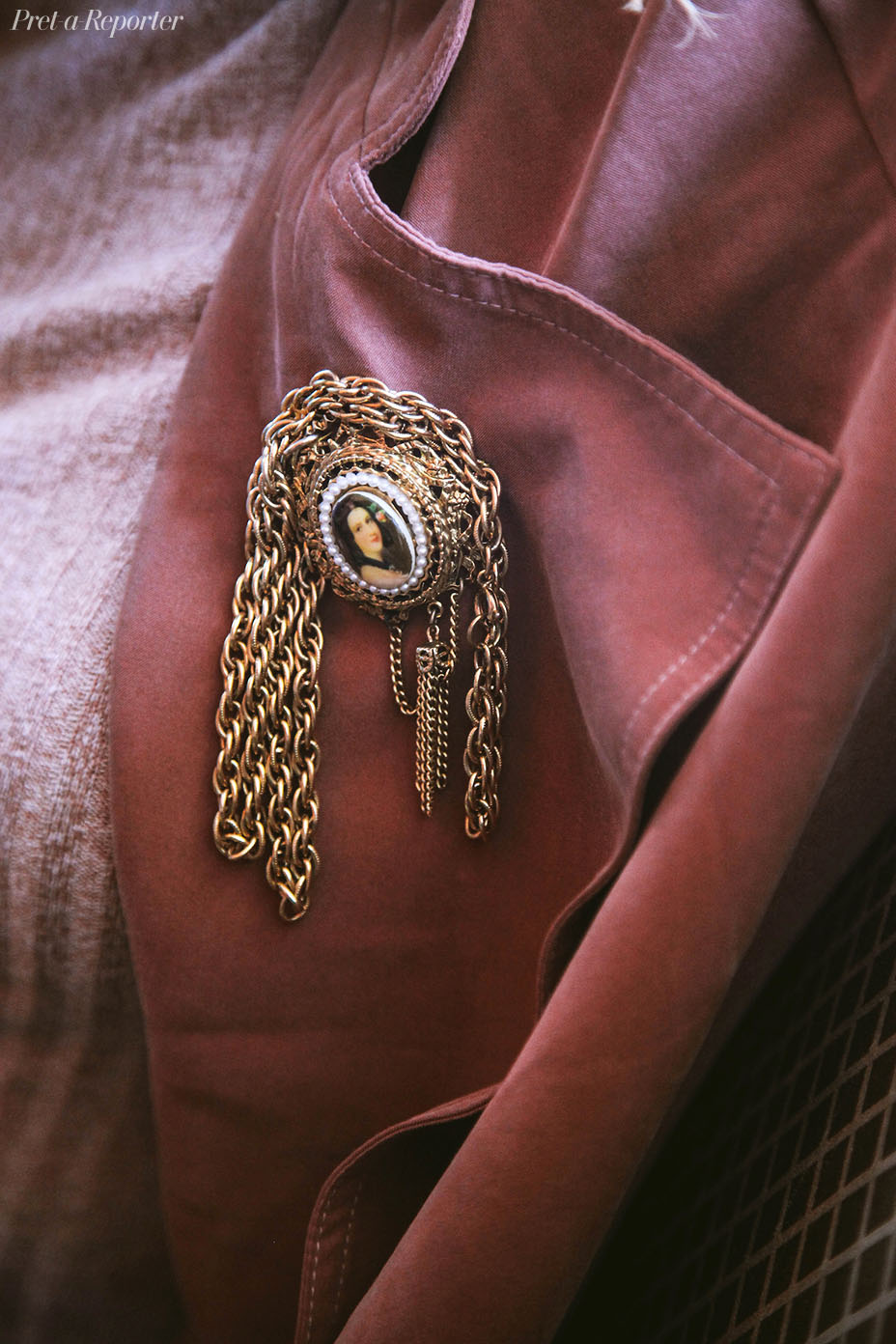 Shoes: “I bought these while I was drunk in Paris. They were expensive.” 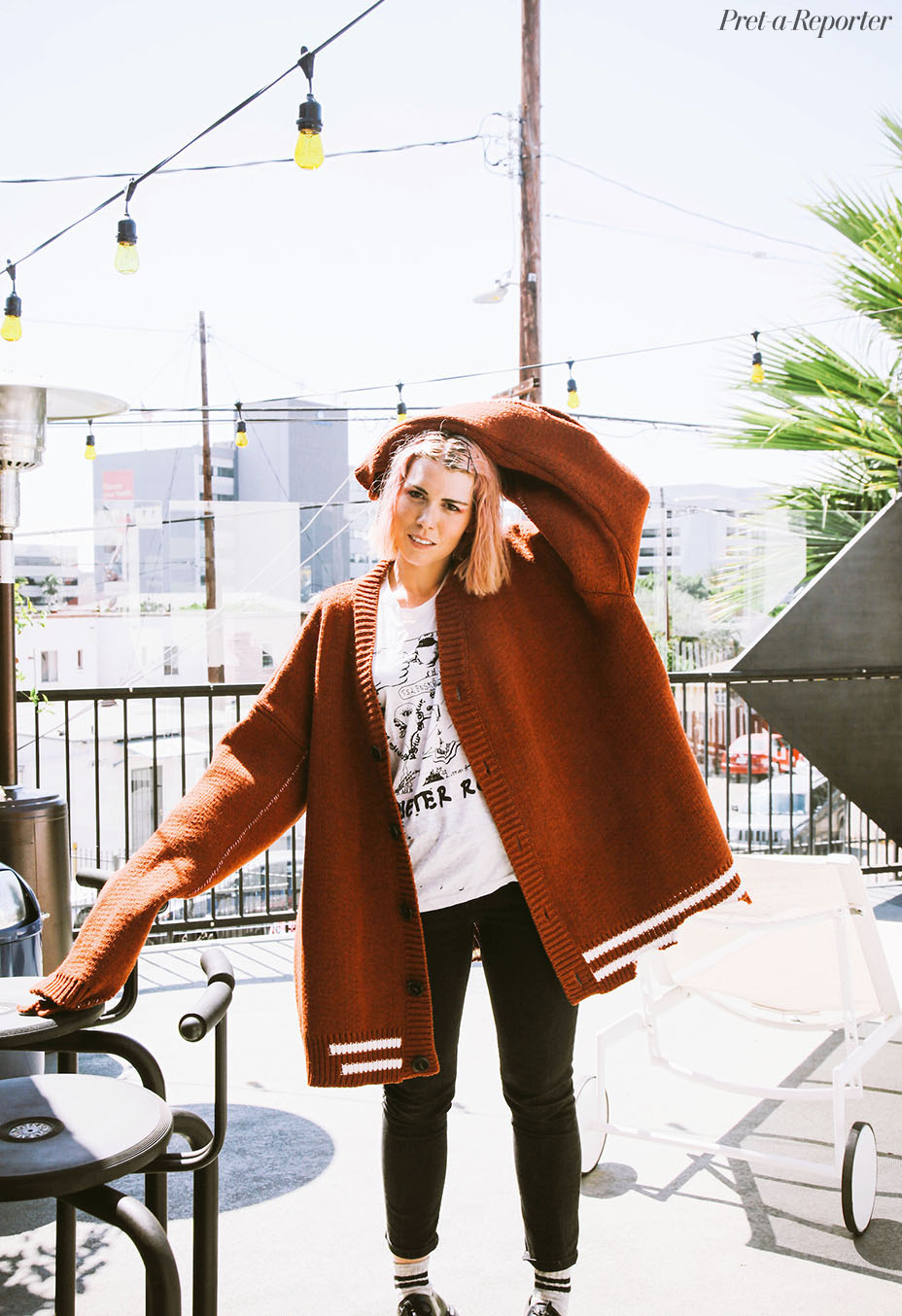 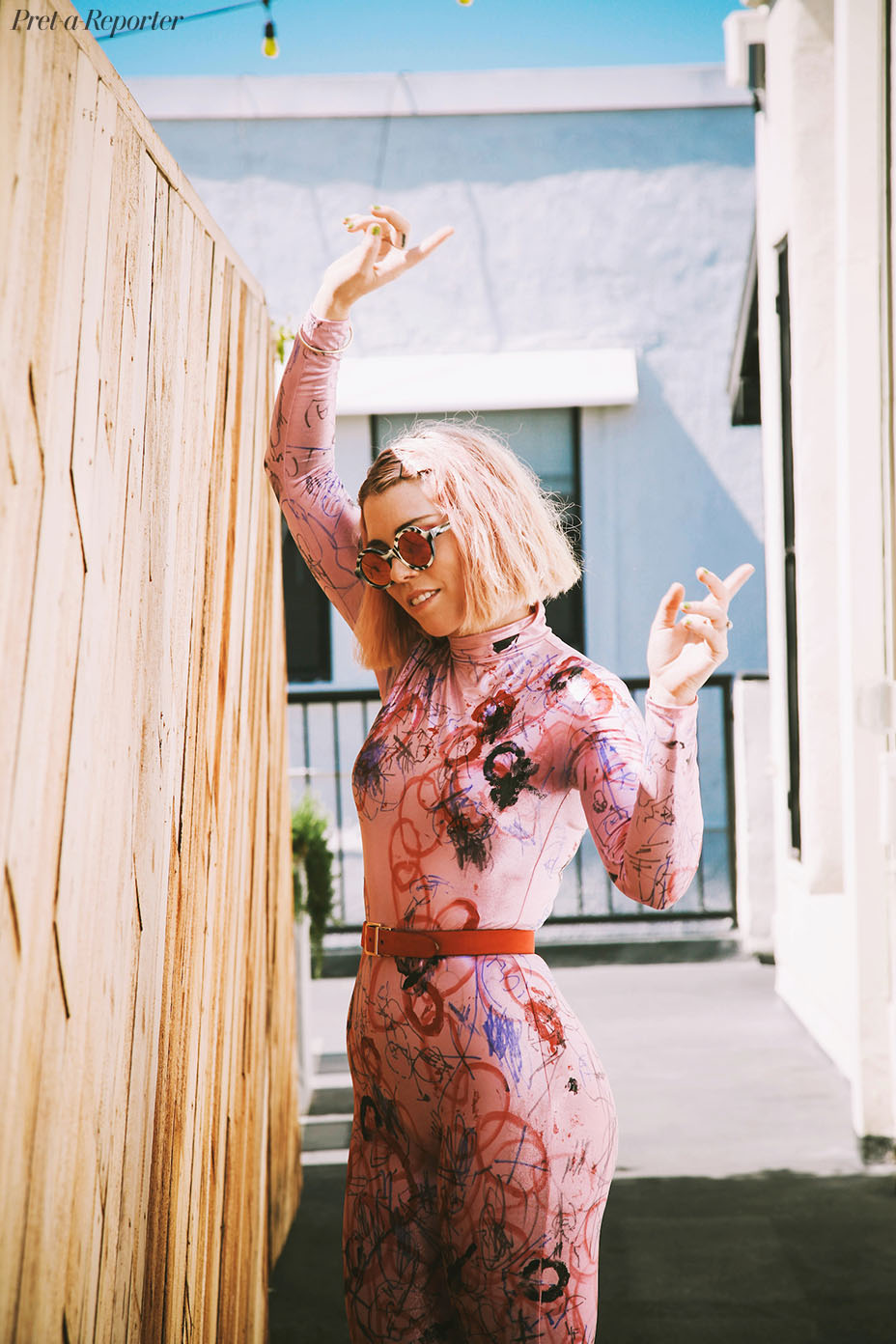 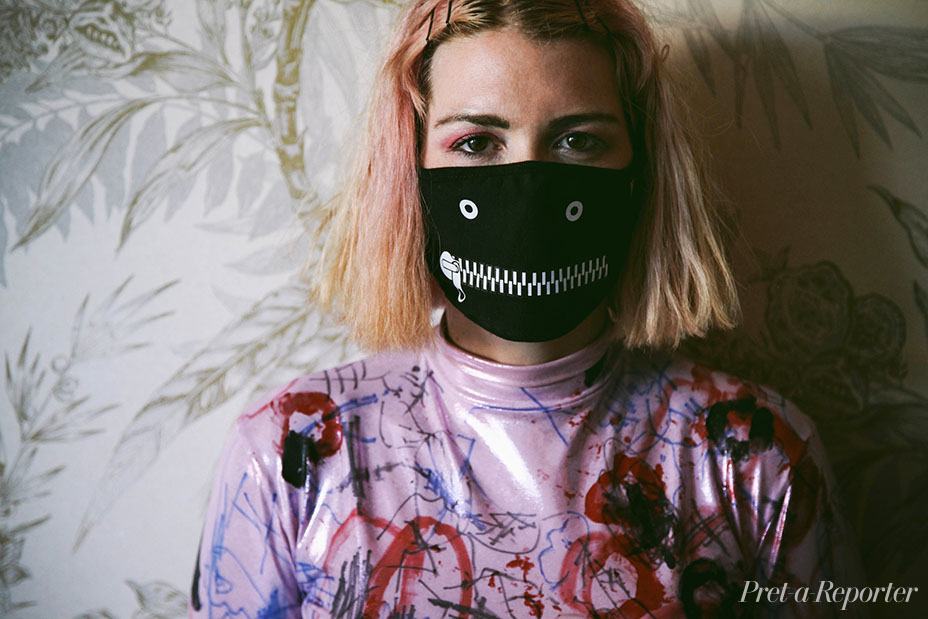 “I fly a lot and happen to get a cold every time I get off a plane so when we were in Korea everyone was wearing these masks and I got a couple. I wore them on stage once, but you have to rip them off quickly and get on the mic.”