Eighties nostalgia is alive and well in Hollywood, it seems! Not only did Peacock TV recently reboot the beloved Punky Brewster and Saved by the Bell series to much fanfare, but Fred Savage is currently executive producing a reimaging of his hit show The Wonder Years, and the eagerly anticipated third season of Netflix’s Karate Kid-inspired Cobra Kai hit the streaming giant at the start of the year, immediately securing the No. 1 spot. The latter, which debuted in 2018 and is set 34 years after Daniel LaRusso (Ralph Macchio) defeated Johnny Lawrence (William Zabka) in the 1984 All Valley Karate Championship at the end of the first film, sees the two adversaries on opposite sides of the mat yet again, this time as adults, and has proved highly popular with audiences. And now, the house where a grown-up Daniel lives with his wife and children on the series is up for sale!

As first reported by TMZ, the Tuscan-inspired property is being repped by Chad Carrodus and Jere Metcalf of Atlanta Fine Homes Sotheby’s International Realty and comes with a $2,650,000 price tag. Initially built in 1968 and completely revamped in 2008, the sprawling pad, which is known as Villa Flora, comprises six bedrooms and seven bathrooms in a whopping 9,214 square feet.

Said to be located in Encino, where the Karate Kid movies and Cobra Kai are set, in reality, the house can be found at 130 Woodlawn Dr. NE in Marietta, Georgia, about 20 miles north of Atlanta. Yes, you read that correctly! Despite the ad nauseam mentions of “the Valley,” “Encino” and “Reseda,” little of the series is actually shot there. The vast majority of filming instead takes place in the ATL, which does a fairly adequate job of standing in for Los Angeles. And Daniel’s Spanish-style property plays at the center of it all. As it turns out, Hollywood has actually descended upon the picturesque pad twice! 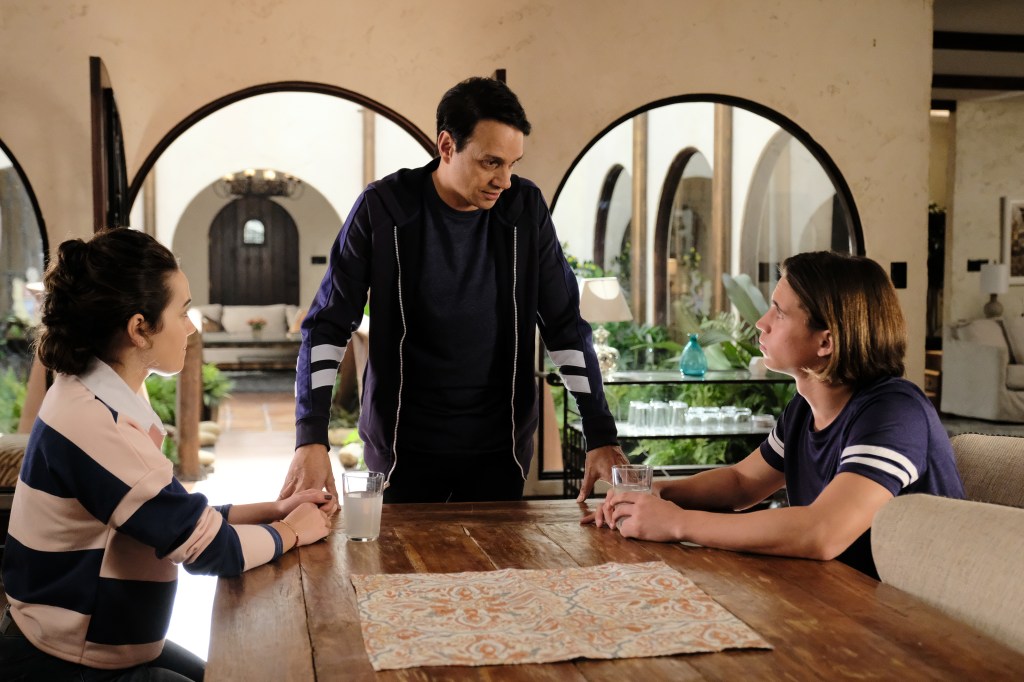 Before the 2008 renovation, the home had a completely different look. The original 1968 residence featured a single story and 2,400 square feet. With a budget of $750,000 and a six-and-a-half-month time frame, a Georgia woman named Beth Brooks and her architect/general contractor Jon Fischer completely revamped the place, adding on a second floor and a considerable amount of square footage. Their efforts were chronicled in “Spanish-Style Oasis in Atlanta,” the season two episode of HGTV’s My Big Amazing Renovation (now streaming on Discovery+). Pretty much the only exterior elements held over during the reno were the trio of arches that line the front porch.

According to Brooks, the residence formerly belonged to a local lobbyist, and not only are Jimmy Carter and Ronald Reagan said to have spent time on the premises during their presidencies, but golfer Arnold Palmer was also supposedly a guest at one point. And, per Seven Hills Auctions, “The azaleas adorning the property’s backyard were gifted to the home’s first owner by the Callaway family of Callaway Resort & Gardens, which is renowned for its trademark rare azaleas.”

Upon divorcing her husband of 14 years, Brooks snatched up the home and began the extensive remodel, all the while living on the premises with her three kids, three dogs and “persnickety” rabbit. It turned out to be a fortuitous undertaking. As detailed on My Big Amazing Renovation, Brooks and her contractor wound up falling in love — so not only did she walk away from the project with a fabulous new residence, but a new boyfriend, to boot!

During the reno, the kitchen was given a complete update and today features a double Wolfe oven and range, open shelving, a wood-fired pizza oven, two Bosch dishwashers and a 48-inch Sub-Zero fridge. 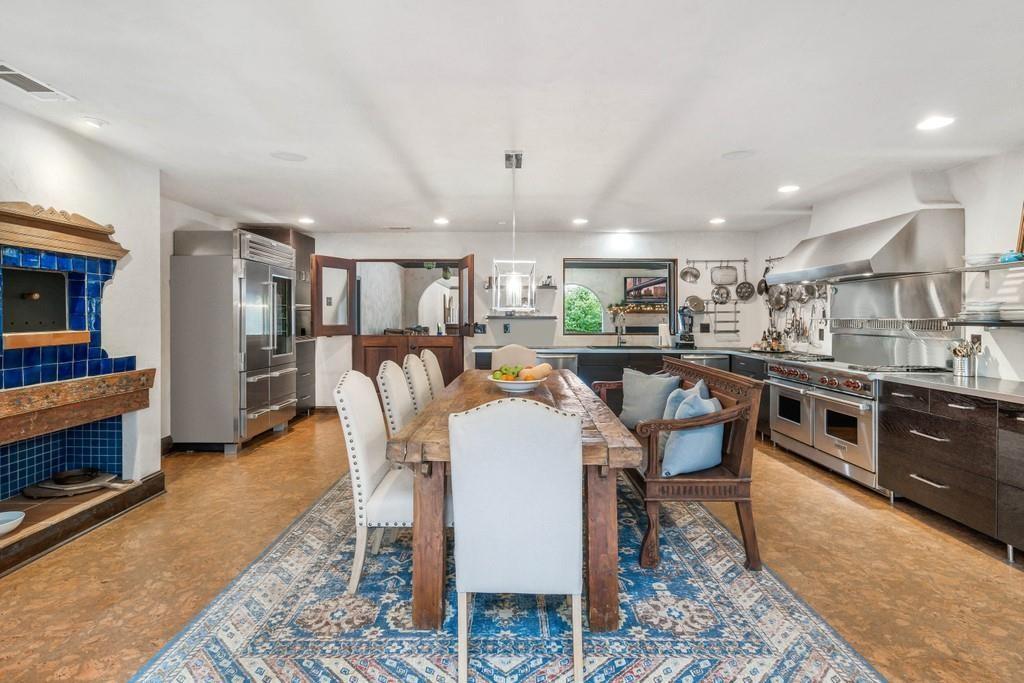 Tucked away on a wing of the ground floor, the owners’ suite is a true oasis, crafted with a fireplace, glass-paned doors and a sitting area. The attached bath, which is larger than most bedrooms, boasts a stand-alone copper tub, a wooden vanity and a peaked ceiling. The room’s crown jewel, though, is the stone and brick shower framed by an old masonry wall that originally stood outside in the garden. According to Brooks, legend has it that Jimmy Carter helped lay the bricks for the enclosure during a visit to the property.

The residence is organized around an impressive two-story central atrium, with a koi pond and bridge, that is original to the home, though Brooks had it cleaned up, brightened and capped with a pyramid-shaped glass roof. The copper piping that runs the length of the walls drains into cisterns, which the family uses to collect rainwater to irrigate the plants and fill the pond.

The striking pad also boasts cathedral, coffered and beamed ceilings, a wet bar and cork flooring throughout. Outside on the 1.1-acre lot is a pool, a spa, an outdoor dining area with a fireplace (which Daniel and his family make regular use of on Cobra Kai), a three-car garage and a greenhouse.

Villa Flora makes its first Cobra Kai appearance in the series’ second episode, “Strike First.” As an adult, Daniel has found fortune through his high-end car dealership, LaRusso Auto Group (“We kick the competition!”), and that wealth is clearly expressed to viewers by his expansive home.

It is not hard to see how the production team zeroed in on the property, as its Mediterranean design is very much in line with Los Angeles architecture. But as production designer Ryan Berg expressed to the Cobra Kai Kompanion podcast, “Shooting Atlanta for L.A. is not the world’s easiest thing.” So to further sell the place as a SoCal pad, a palm tree was strategically placed by Berg and his team in a prominent spot out front.

The interior of Villa Flora was featured regularly throughout the series’ inaugural season. A replica of that interior was then constructed on a studio soundstage for the filming of season two and beyond.

Though the set is a faithful re-creation of the home, Berg and his team did change a few things to make the space more filming-friendly. As he told the Cobra Kai Kompanion, the alterations included widening the hallways and raising the ceiling height from 8 to 9 feet in order to give the LaRusso house a “little bit of breathing room.” The living room and the area around the atrium were also opened up about 3 feet to allow the camera crew more room to work and the actors more space to move around. Berg is especially attuned to how the sets affect his cast. He explained, “I mostly care about how the actors are dealing with the space. I want them to be comfortable in the space and that they believe the space. Because I feel like if they were in something super fakey and super junky, if I were acting, it would take me out of it.” Berg is obviously someone who has no desire to sweep the leg of his cast!