Continue to The Hollywood Reporter SKIP AD
You will be redirected back to your article in seconds
Skip to main content
July 23, 2019 3:15pm

Chicago had made a name for its food, its architecture and its unpredictable weather. But over the last decade, it has also become known for its high-end streetwear, thanks to the style movement led by native sons Kanye West and his protege Virgil Abloh (the Off-White designer and artistic director of Louis Vuitton menswear), along with their streetwear designer friend Don Crawley (aka Don C of the label Just Don). The trio created a world of covetable $700 T-shirts, limited-edition sneaker drops and collaborations with everyone from Nike to local favorite Garrett Popcorn.

It was Abloh who inspired ComplexCon artistic director Takaski Murakami to urge an expansion of the four-year-old ComplexCon celebration of all things urban and street to Chicago’s McCormick Place Convention Center on July 20-21 to showcase the city’s buzzy brands to the conference’s 15,000 daily visitors.

“It’s precisely because of Virgil and his group—since they emerged from here—that Chicago is so important right now as a style city,” Murakami told The Hollywood Reporter. “I’m always thinking about ideas to stay relevant and how to get to the next level. To do this in Chicago is to leap forward and to discover something new. Streetwear culture in Chicago is now iconic — Kanye, Virgil and Don C are the people that made the movement.” 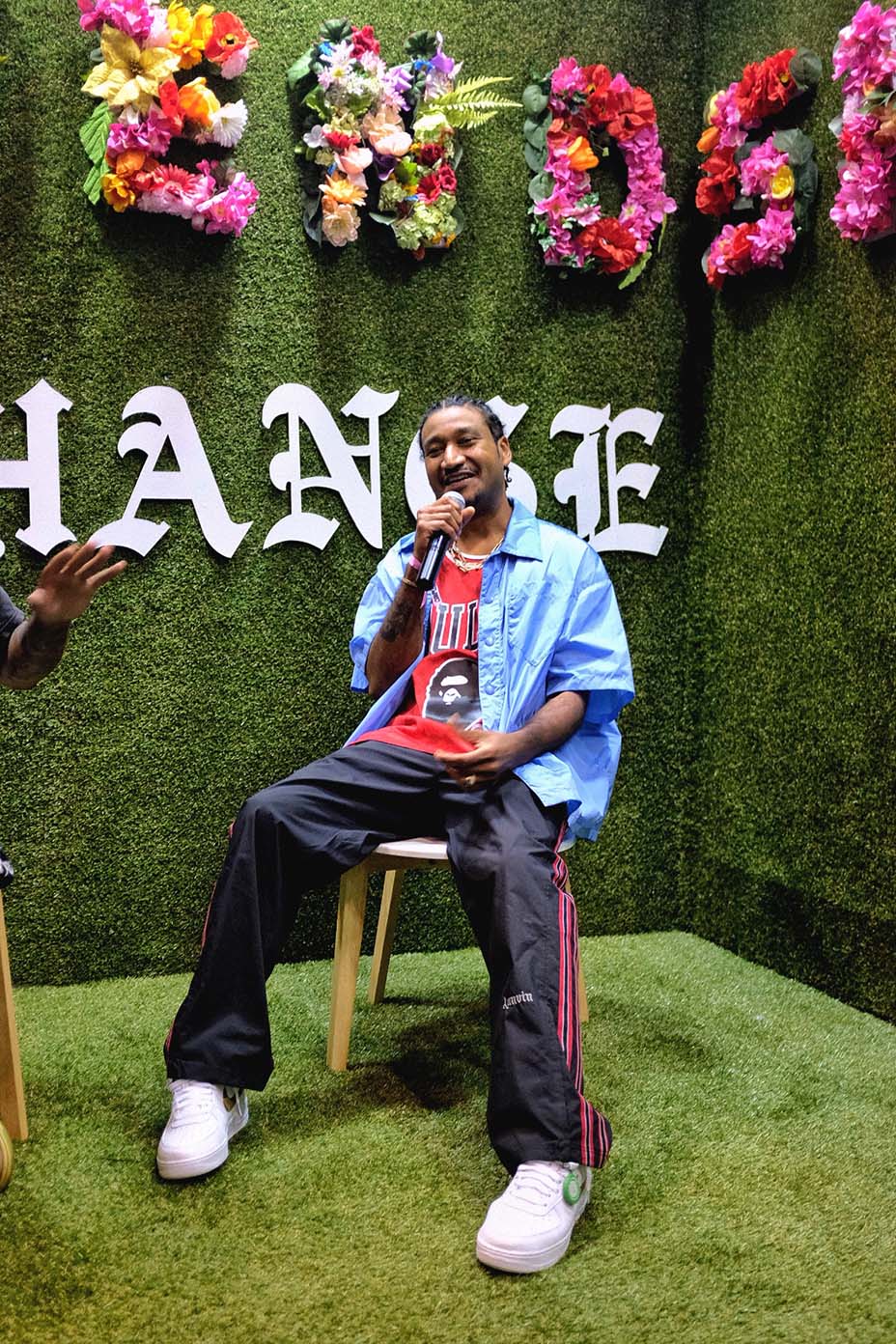 Murakami continued: “My greatest interest has been what kind of talent is in Chicago and what kind of audience is here. That started in 2016 and since then Virgil has become the artistic director of Louis Vuitton and the street culture itself has surged. Right now, I’m really curious about more raw street culture and the people I get to meet.”

Occupying an important space among heritage sportswear brands such as Converse, Reebok and Champion were Chicago’s emerging fashion talents curated by Murakami and ComplexCon executive producer Isis Arias Clermont as “brands to watch,” or also known as the next generation of could-be streetwear giants. Rello, Sheila Rashid, Kristopher Kites and Casper Wright made the cut for writing fresh dialogue in Chicago’s ever-expanding street style narrative.

Rello drew interest from the crowd with multiple points of entry that reflect the industries in which its namesake artist is making an impact, including apparel, fine art and figurines. Rello’s space for his streetwear label Vita that bears the bold neon logo “Chicago Over Everything” made for a major Instagram moment. His Mickey and Minnie Mouse inspired characters reimagined as bad mice Ruby and Ozzy walked the show talking pictures and piquing interest in his release of limited-edition figurines in his eponymous pop-up shop on the show floor. T-shirts, also featuring Ozzy and Ruby with the wording “Please Interpret as Black,” were a major hit. Doing a little bit of everything is often what an up-and-coming streetwear brand must do to gain footing in the competitive Chicago scene. LeBron James and SZA are among the fans of the brand.

Rashid has already tallied major interest from stars such as Lena Waithe and Zendaya who love her custom-made overalls — as does Chance the Rapper, who we can credit with reintroducing the workwear staple into high-style streetwear. Playing on her newfound celebrity, Rashid released a $50 T-shirt that she calls “Chance and Bey Touched the Overalls,” which depicts Beyoncé touching Chance while wearing the overalls she designed. Also in the mix are overalls with graphics inspired by Serena Williams and Meghan Markle.

the “bey touched the overalls” tee along with Serena and Meghan Markle. sweaters, overalls and denim will also be available @complexcon chicago

While Murakami and team only shed light on four up-and-comers within the show, ComplexCon and the city of the Chicago is rumbling with a new crop of designers vying to be the next Abloh. One such brand is Honoré Wicker Park, which has gained a following in the city’s streetwear social circles for its limited-edition “gold chain” T-shirt, decorated with a gold chain cross necklace; and its Louis Duffle, with a photo print of a Louis Vuitton duffle bag. Honoré did not exhibit at ComplexCon but is hosting a special pop-up shop in Chicago’s Wicker Park neighborhood to capitalize on the streetwear synergies.

Clermont hopes that brands like Honoré as well as others seeking to make their mark among the rich pool of Chicago streetwear contributors will eventually call ComplexCon home. “Our brand is very interested in youth culture and we always want to tap into what’s on that pulse,” she said, noting that ComplexCon will return to its Long Beach, Calif., home base in November and expand nationally and globally in the year to come.