Tucked into a Burbank warehouse, thousands of meticulously labeled drawers and boxes offer a dizzying look at costume jewels from the most iconic films of cinema’s Golden Age. But if you’re trying to find the studio known as Joseff of Hollywood, don’t bother looking for any signage.

“We had a sign that needed painting, but after we took it down, we decided to not put it back up,” explains Tina Joseff, daughter-in-law of Hollywood’s most prolific jewelry designers.

Eugene and Joan Joseff may not be names that spring to mind as easily as Edith Head, Orry-Kelly or Helen Rose, yet their work should be positioned on equal footing with these and other legendary costume designers. It’s impossible to envision Bette Davis’ Queen Elizabeth without ropes of pearls in 1939’s The Private Lives of Elizabeth and Essex, while Greta Garbo’s titular Camille (1936) is all the more romantic when you spy the sprays of crystal stars in her hair. For hundreds of films, it was Joseff of Hollywood that provided this custom-designed sparkle.

“Back in the ‘30s, ‘40s and ‘50s, it was said we had two to three million pieces of jewelry,” Tina says. “I’m not sure anyone ever confirmed that. It’s a really big job to photograph and catalog every piece. It’s still an ongoing project.” 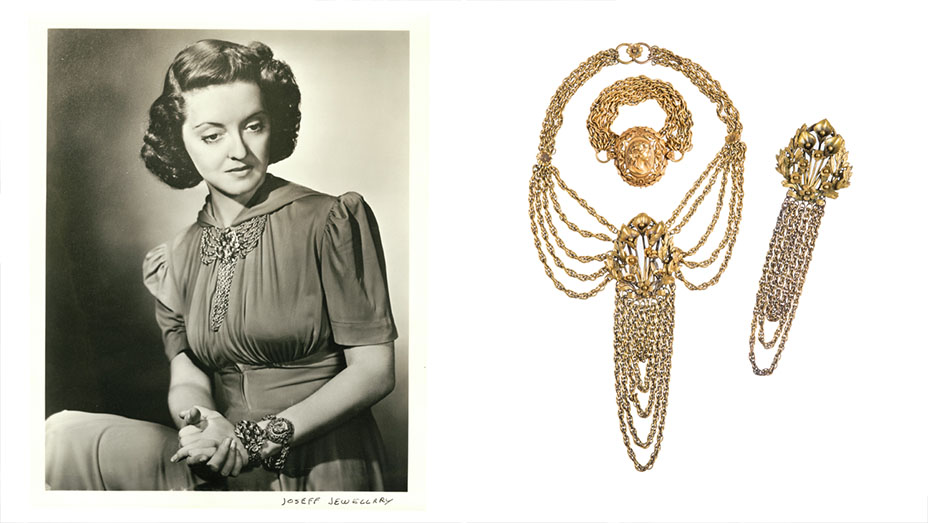 For the first time, Joseff of Hollywood is opening up its archives and offering these and other pieces for sale. More than 500 costume jewels will go on the block Saturday, when Julien’s Auctions presents “Treasures From the Vault: Joseff of Hollywood” at their Los Angeles headquarters, located at 805 N. La Cienega Blvd. The auction, which kicks off at 10 a.m. PT, also will be live-streamed with online, real-time bidding.

Why was now the right time, after all these years? Tina, who has worked at the company since 1972, acknowledges that increased interest among film-memorabilia collectors helped spur the desire to dip into the archives. “We’ve had these pieces locked away in the vault for all these years; most people don’t even know we exist,” she says. “We thought it was time to share it with the public. We’ve enjoyed it all these years, but now is the time to let it get out there for others to enjoy as well.”

The wide range of jewelry indeed represents the best of classic film, from necklaces worn by Vivien Leigh in Gone With the Wind (1939) to a pair of golden, snake-embossed cuffs seen on Elizabeth Taylor in Cleopatra (1963). More unusual pieces include a helmet worn by Douglas Fairbanks, Jr. in 1937’s The Prisoner of Zenda and a metal breastplate Eugene Joseff crafted for 1942’s Jungle Book. Remember the cigar case Clark Gable’s Rhett Butler donates during the Atlanta Bazaar sequence in Gone With the Wind? That’s also among the auction highlights, carrying an estimate of $40,000 to $60,000. Other pieces were rented for use in multiple films: a sizeable silver-plated ring featuring a faux ruby surrounded by simulated diamonds was seen on Davis in The Private Lives of Elizabeth and Essex, Mae West in The Heat’s On (1943), Tallulah Bankhead in A Royal Scandal (1945) and Dame Judith Anderson in Salome (1953); the ring carries an auction estimate of $2,000 to $3,000. 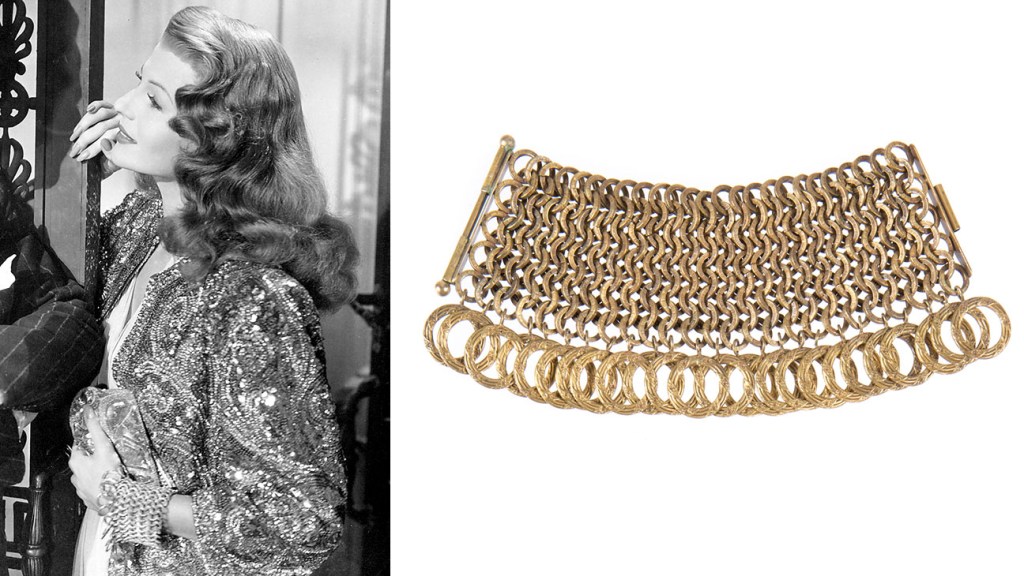 “Marilyn Monroe, Jane Russell, Marlene Dietrich — every actress you can think of from the Golden Era of Hollywood is represented in this event,” says Martin Nolan, executive director of Julien’s Auctions. “And these pieces just begin to scratch the surface.”

Born in Chicago in 1905, Eugene Joseff worked in advertising while designing jewelry as a hobby, nurturing his craft with an apprenticeship at a foundry. He moved to Hollywood in 1928 and befriended costume designer Walter Plunkett, who dared Joseff to do a better job after listening to his multiple complaints about the contemporary jewelry seen in period-specific costume dramas. By the early 1930s, Joseff was already a sought-after jewelry designer, crafting pieces for Greta Garbo in 1931’s Mata Hari and Marlene Dietrich in 1932’s Shanghai Express. “Eugene Joseff became the go-to guy for jewelry in Hollywood,” Nolan says.

Two subsequent decisions also played an integral role in the business: With the arrival of World War II, Joseff’s foundry became important to the war effort, with McDonnell Douglas and other aircraft manufacturers calling. That part of the business grew into Joseff Precision Metal Products, which continues to this day.

“We’re still actively making aerospace parts for Honeywell, Lockheed, Boeing and others,” Tina points out. And that’s another reason why the sign never went back up on the building, she says: “Because we are in the aerospace industry, security is important. We had a guy just walk in off the street one day and offer money for anything used by Clark Gable. No one is supposed to walk in; he was a fluke. So we like being kept hidden.”

And that second decision? In 1938, Eugene, by now running a thriving studio with dozens of employees, decided he needed some secretarial help; a local business school sent a woman named Joan Castle. Two years later, Joan was the office manager — two years after that, she was Mrs. Eugene Joseff. When Eugene died in a plane crash in 1948, Joan took over both companies.

“All her friends told her to sell the business, but she had a great love for what she and Eugene had built together,” says Tina, who joined the company after marrying the couple’s only son, Jeffrey, who was 11 months old when his father died. (Their two children and a daughter-in-law are the latest generation to continue the Joseff legacy.) 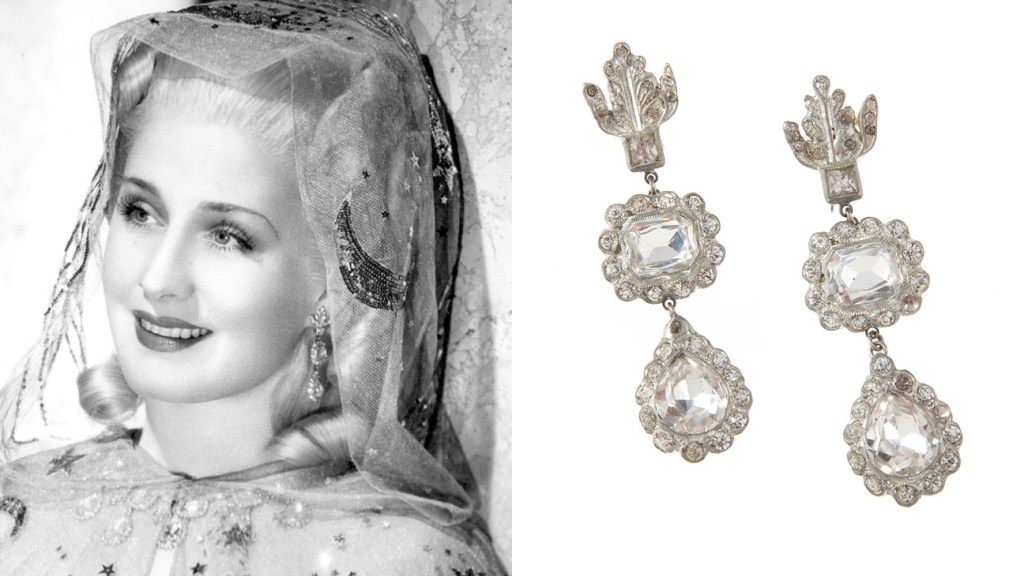 While the aerospace business continues to thrive, Joseff of Hollywood has waned somewhat over the years, Tina says. “Television became more important at a certain point — I Love Lucy was one of our big shows. But for the most part, costume designers stopped looking for custom work; it was easier to walk into Nordstrom and buy it,” she notes. Joan, meanwhile, passed away in 2010, at the age of 97. “And she was the president of the company until the day she died,” Tina adds.

You’ll still find Joseff of Hollywood pieces being rented for productions, appearing in 2003’s Pirates of the Caribbean: The Curse of the Black Pearl and, most recently, HBO’s Westworld. The business isn’t what it once was, but “we sort of like it that way,” says Tina, who also said she’s thinking about retiring. Before that happens, she’d like to see Eugene and Joan Joseff enjoy a moment in the spotlight. On Saturday at Julien’s, that’s sure to happen. “The legacy of both Eugene and Joan is important to Hollywood and its history,” Tina says. “We’re hoping people will appreciate these pieces for their artistic beauty as well as the role they played in these films. It’s time someone should appreciate them as much as we do.”