Costume designer Alexandra Byrne was raised in Shakespeare country, in Stratford upon Avon, and her career has been largely focused on creating costumes for historical dramas, including Cate Blanchett’s Elizabeth: The Golden Age, for which she won the Oscar in 2007.

Robbie plays Elizabeth I, known as the Virgin Queen because she never married, who ruled England for 45 years from 1558 to 1603, establishing the Church of England as a compromise between Protestantism and Catholicism. Meanwhile, many English Catholics considered Mary Queen of Scots (Ronan), who reigned over Scotland from 1542 to 1567, the legitimate heir to the English throne, but after she was the focus of a failed rebellion, she was imprisoned and eventually executed by Elizabeth.

The film delves into the dynamics of female power between a ruler and her challenger, and of course, how the two woman cultivated their images in the time of corsets and ruff collars. I chatted with Byrne about how faithful she was to the Elizabethan period, and how she incorporated contemporary materials (denim!) to make the story appeal to today’s viewers. 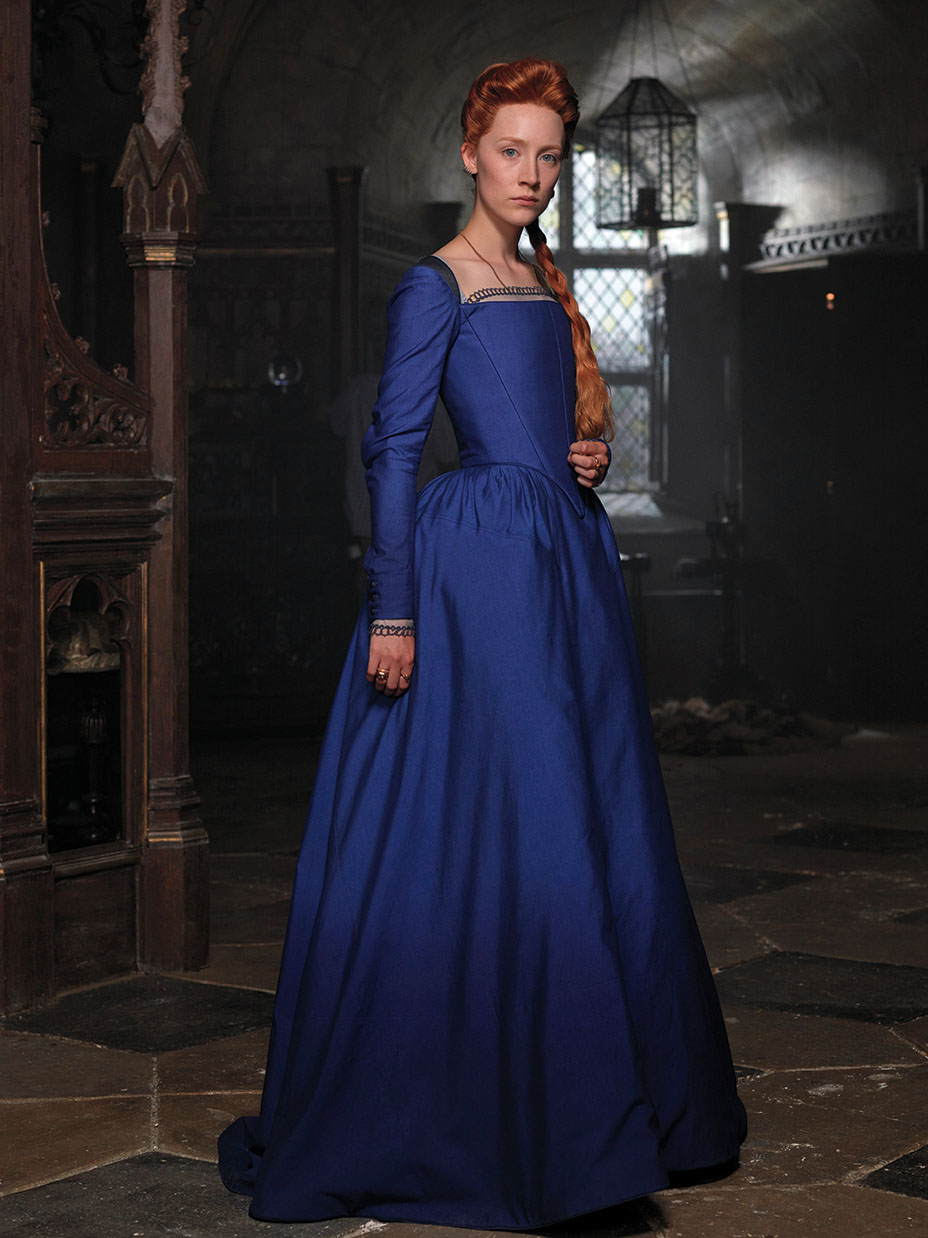 THR: What I find so interesting about historical films is that they are artifacts of a historical time, way in the past, but also of today, the era during which they are made. Mary, Queen of Scots struck me as one of the first historical dramas of the #MeToo era, in that it really deals with the trials of women in an authentic way, including childbearing, ambition, infidelity. How did you reconcile the history with the modern themes?

Alexandra Byrne: I have done the Elizabethan period before … and I knew what it took to make those dresses, and what stock was available, which allowed me to have a clear, strong, instinctive response to the script from the start. Given all of the artistic, contextual and budget choices, I landed on the idea very quickly of using denim. It’s not true to period, but artistically, the reason why I chose it was that I wanted the clothes to have an immediacy and accessibility. I wanted the men to be sexy, and Elizabethan pumpkin breeches are not sexy. I also wanted fabric that got better with wear, because Elizabethans didn’t have dry cleaners, so that got me thinking. On the practical front, weather in Scotland, where we were shooting, can be rain, hail and sun in one day, and the clothes were going to get wet and muddy. I was also very interested in limiting my materials so I could manipulate a fabric to tell a story. 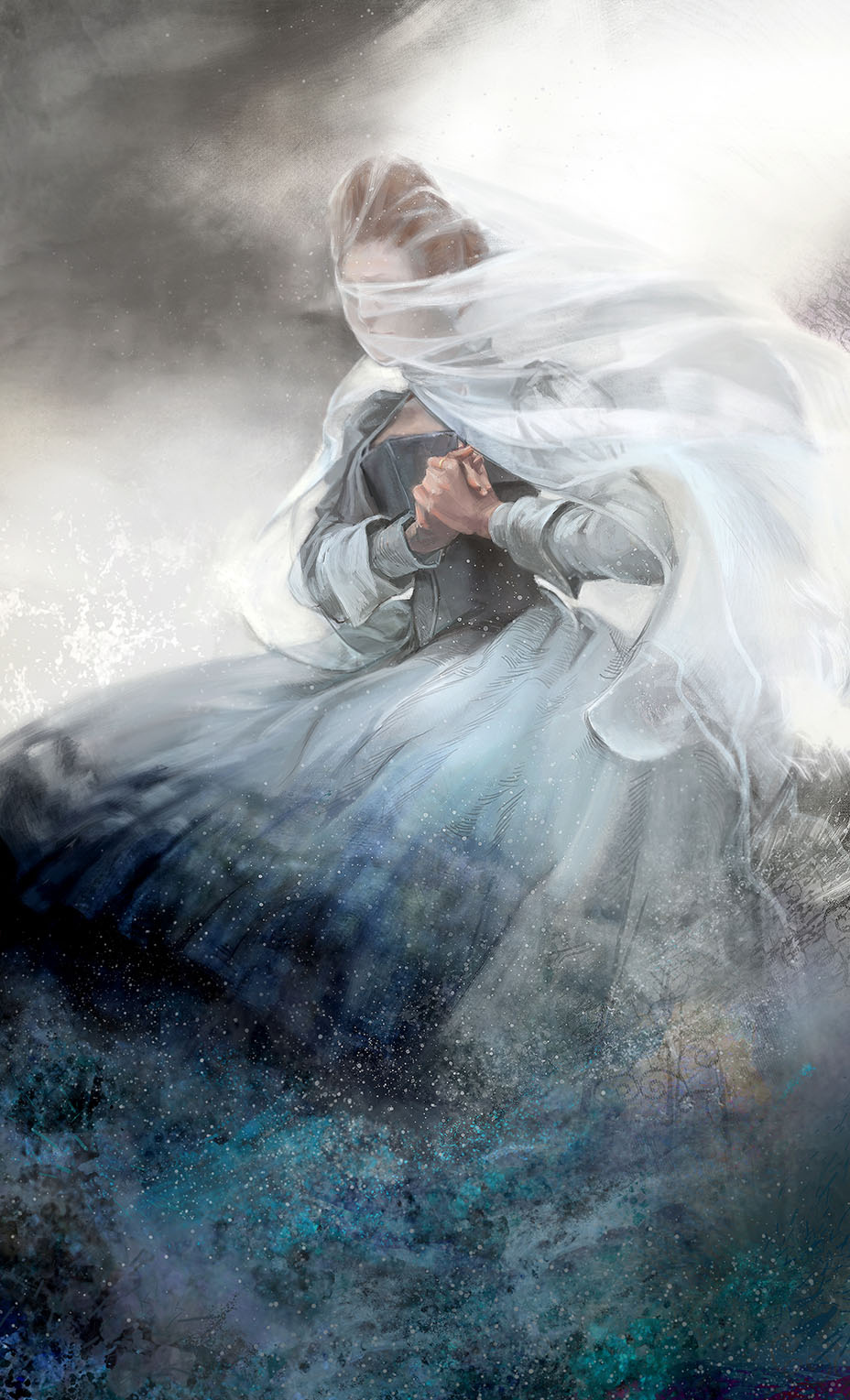 THR: Was it easy to execute it, once you’d made the decision?

AB: One of first things we did was to make a men’s Elizabethan doublet in denim. It was horrible, and I went, whoa, maybe this isn’t going to work. But once I calmed down, I realized what I had to do was use denim with the historical and work out a balance of ancient and modern. I broke out of the denim for key moments because I wanted to locate the story in history. For example, we use portraiture moments to underline the passage of time, from when Mary comes back to England, to the span of 25 years, we go through the changing faces of Elizabeth to underline that. 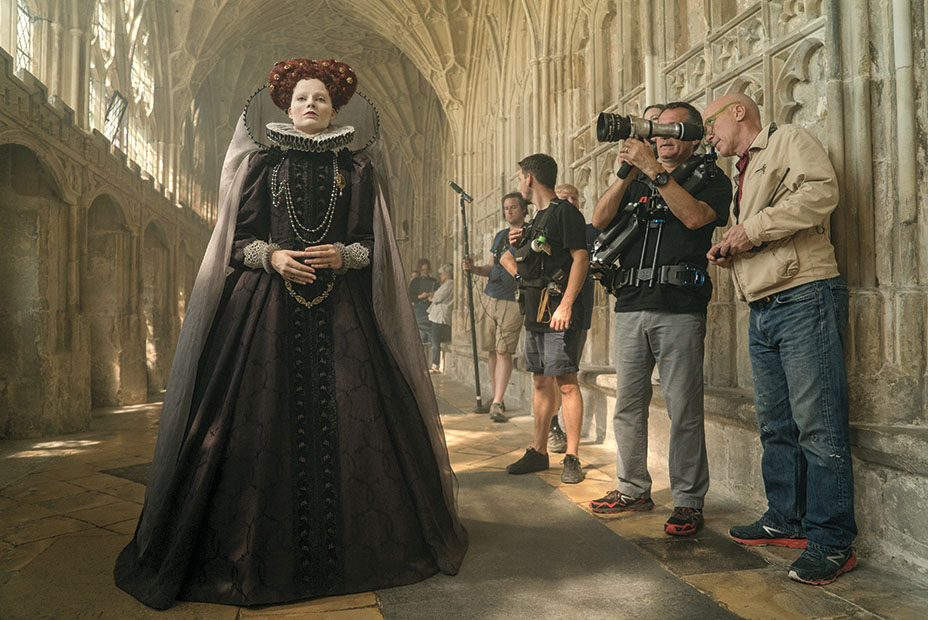 THR: Why does the story of these two queens resonate now?

AB: It’s a story that has huge parallels to now, because there are many things about women today that are being re-evaluated. And then, you had two queens on thrones, which was extraordinary at the time. These women, as monarchs, it was their duty to marry and provide a legal heir. That means for a queen, you gain a husband and a king, but you lose your biggest political playing card, which is potential for alliance with another foreign power. The queens handled their strategies differently, Elizabeth was at the top of a pyramid, England was quite wealthy, and she had a network of spies around her, whereas Mary, when she arrived back in Scotland, was a widow who had lost her title, lifestyle and jewels. She had to be pragmatic. Her clothes are much more evolved out of her growing into the life of Scotland. 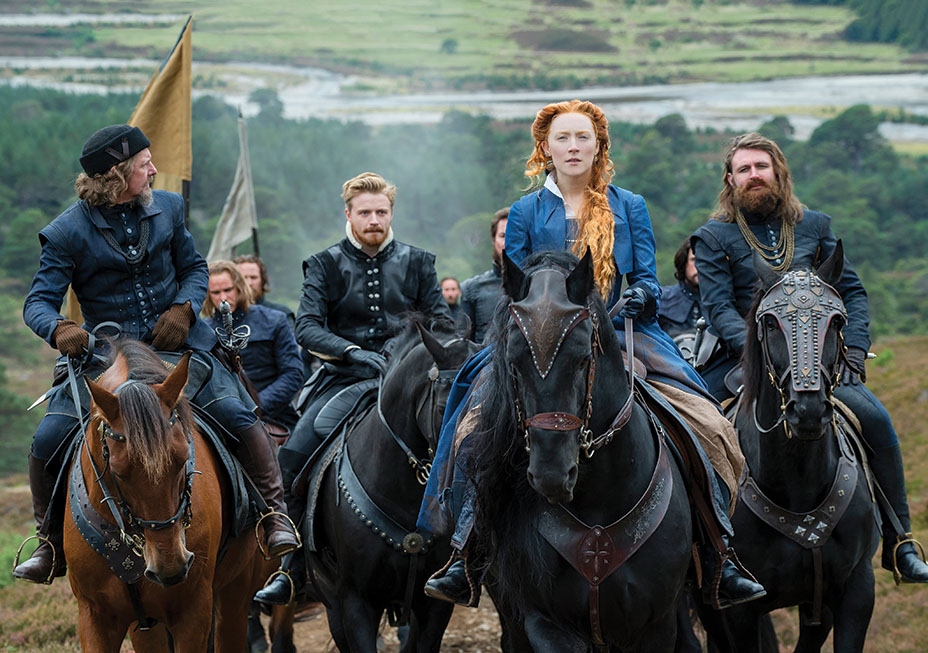 THR: She has a very rugged look, even riding along in military conquests, so I definitely see the appeal of making her gowns in denim when they were going to get splashed with mud! I also notice she wears pants on at least one occasion. Is that historically accurate?

AB: That is historically true. But nothing can be entirely historically accurate, because cloth is woven differently, dyes are different, bodies are different. In Elizabeth’s case, one of her ladies’ in waiting’s sole job was to sweep up precious stones that fell off her clothing, and I’m not going to be working with diamonds. So as a costume designer, you are trying to create something credible, but you’re not making a documentary. And certainly, historically, these two queens didn’t actually meet, so already you are telling a story. But yes, Mary did wear breeches under her skirts.

THR: What kind of denim did you use?

AB: That’s the brilliant thing about denim, there are so many kinds in different colors and weights. We were using a lot of factory surplus, and we had the luxury of very un-Elizabethan stretch denim. For Saoirse, the first thing we made was a fitting toile, and rather than make it in calico, we did it in denim.

THR: Some of the ruff collars were extraordinary; they almost looked like they were made of candied-spun sugar.

AB: I knew from doing Elizabeth in the Golden Age that to do a figure-eight ruff, it takes at least eight inches of lace. Well, 11 or 12 years ago you could get the quantity of old lace, but now you’re so limited. I knew we had to find a new way of doing a ruff, so there was a lot of experimentation, using nylon and other materials.

THR: I wonder if you could 3D print them!

AB: I wonder if you could, there is so much about proportion and scale, because you are framing an actor’s face. That’s what Elizabeth used them for, they were the focus of the face. You might waste a lot of money 3D printing them. Also, some of them are quite complex, made of three layers of sheer fabric to keep them buoyant and give them color play. 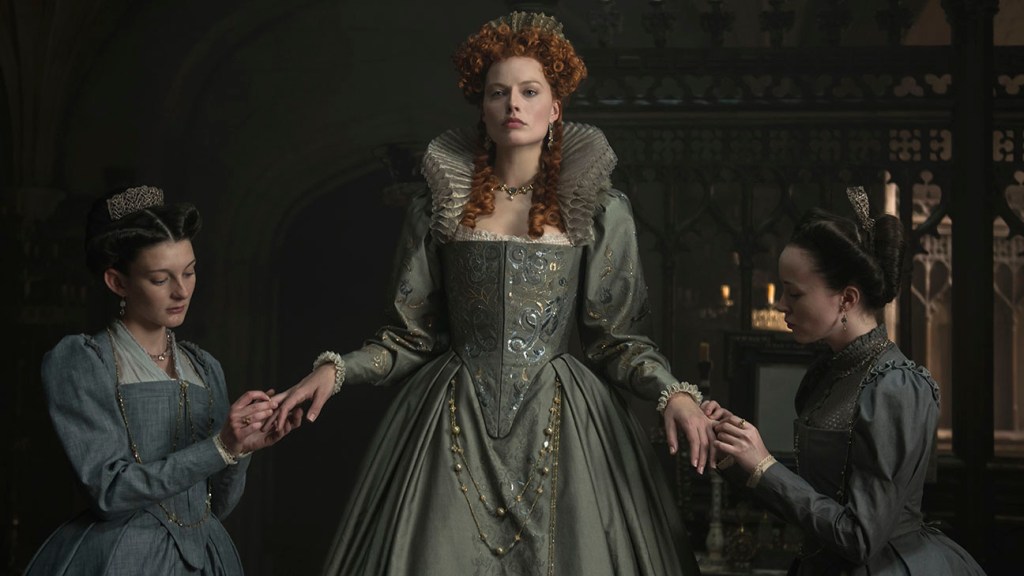 THR: Did the two queens have opposing color palettes?

AB: For Mary, red was an important color, and she wore a red chemise on the execution platform as a symbol of Catholic martyrdom. I had to be careful because I wanted the impact of that red in that moment in the film. Then, I played with shades of denim within Mary’s story in Scotland. Elizabeth’s dressing was more strategic. She was so in control of the power of her appearance, and used her appearance to replace the iconography of the Virgin Mary in Protestant England. I wanted to give her specific outfits for specific occasions. 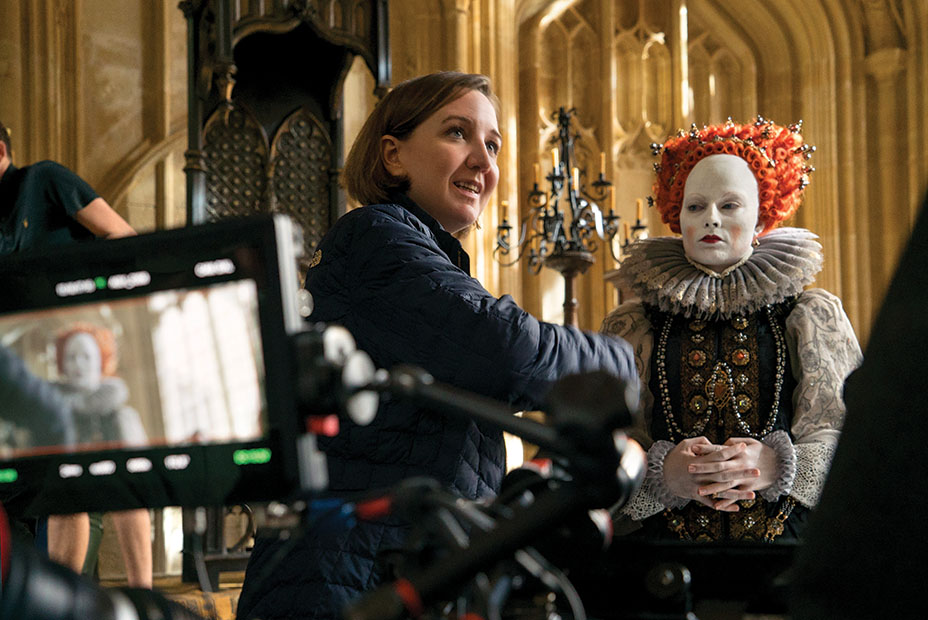 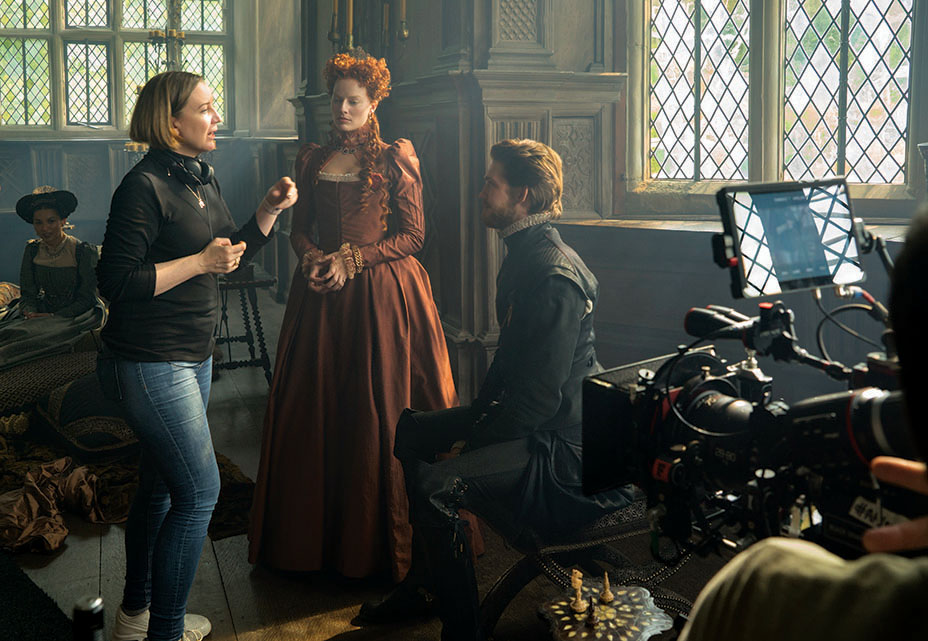 The clearest statement is the dress she wears with Mary. It’s burnt orange to match Mary in denim with orange rust from armor. Until she gets smallpox, which must have been huge impact on her, she was already undermined by reports of Mary’s charisma and beauty. (That’s the contemporary side of the story, this relationship between two queens, and wouldn’t it be great if we could do this together but you are my rival.) After she gets smallpox, that’s when I take her out of color to a more monochrome existence. She’s not in hiding, she’s withdrawn. When she is with Mary, she is puling herself up to a presentation level to this women. For both queens, there’s story plot in the clothes.

Making of 'Mary Queen of Scots': "It's a Renaissance Version of 'Heat'"