There’s been a lot of media buzz about this season’s all-important September issues, from the groundbreaking number of black superstars and Louis Vuitton celebrity ambassadors covering them, to the unprecedented amount of control Beyonce had over her feature in Vogue.

But seasoned fashion editor Carine Roitfeld has broken away from the pack with her new issue of CR Fashion Book. Promoting doing good as the latest trend, the issue hitting newsstands Sept. 13 is dedicated to raising awareness for global children’s relief organization UNICEF USA, and stars two model citizens: super-influencer Gigi Hadid, who is the daughter of a refugee, and Somali refugee-turned-pioneering Muslim fashion icon Halima Aden. The two have also launched a CrowdRise GoFundMe campaign to raise relief funds. 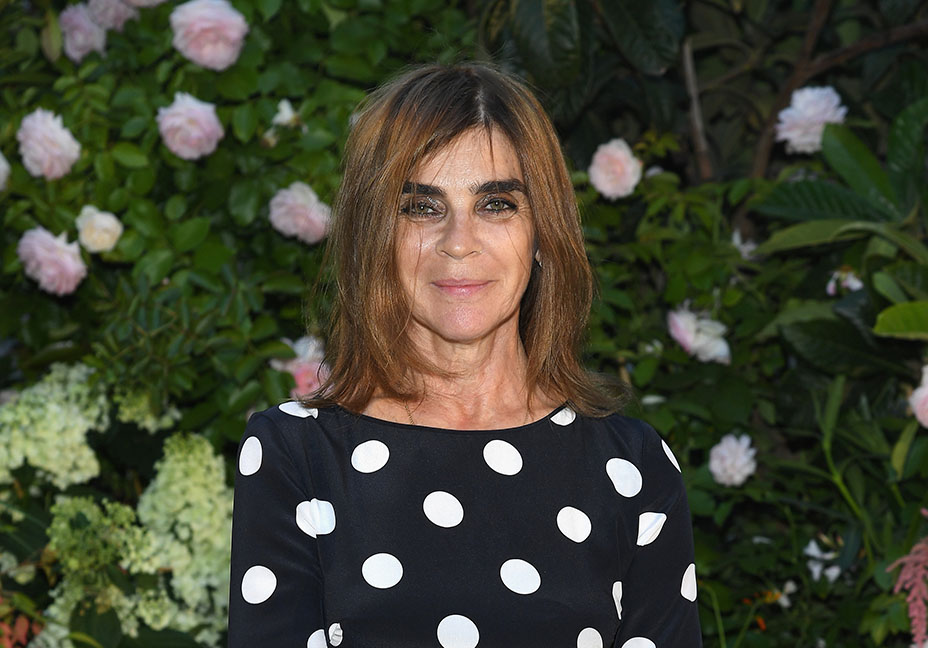 “The state of fashion media is absolutely in flux so it was really important for me to use my existing platform for good,” Roitfeld told The Hollywood Reporter. Choosing to spotlight UNICEF USA was a response to the international news. According to the organization, “more children are on the move now than at any point since World War II,” notes Roitfeld, the editor of Paris Vogue for a decade before founding CR Fashion Book in 2012.

For both Hadid and Aden, the refugee crisis is personal. “My dad [L.A. real estate developer Mohamed Hadid] was a Syrian refugee. He was born in Nazareth, Palestine, and the week that his family was kicked out of their home, they moved to Syria. I think he was also about one week old. It’s crazy to think about what our families did for us,” Hadid shares in an inside feature. 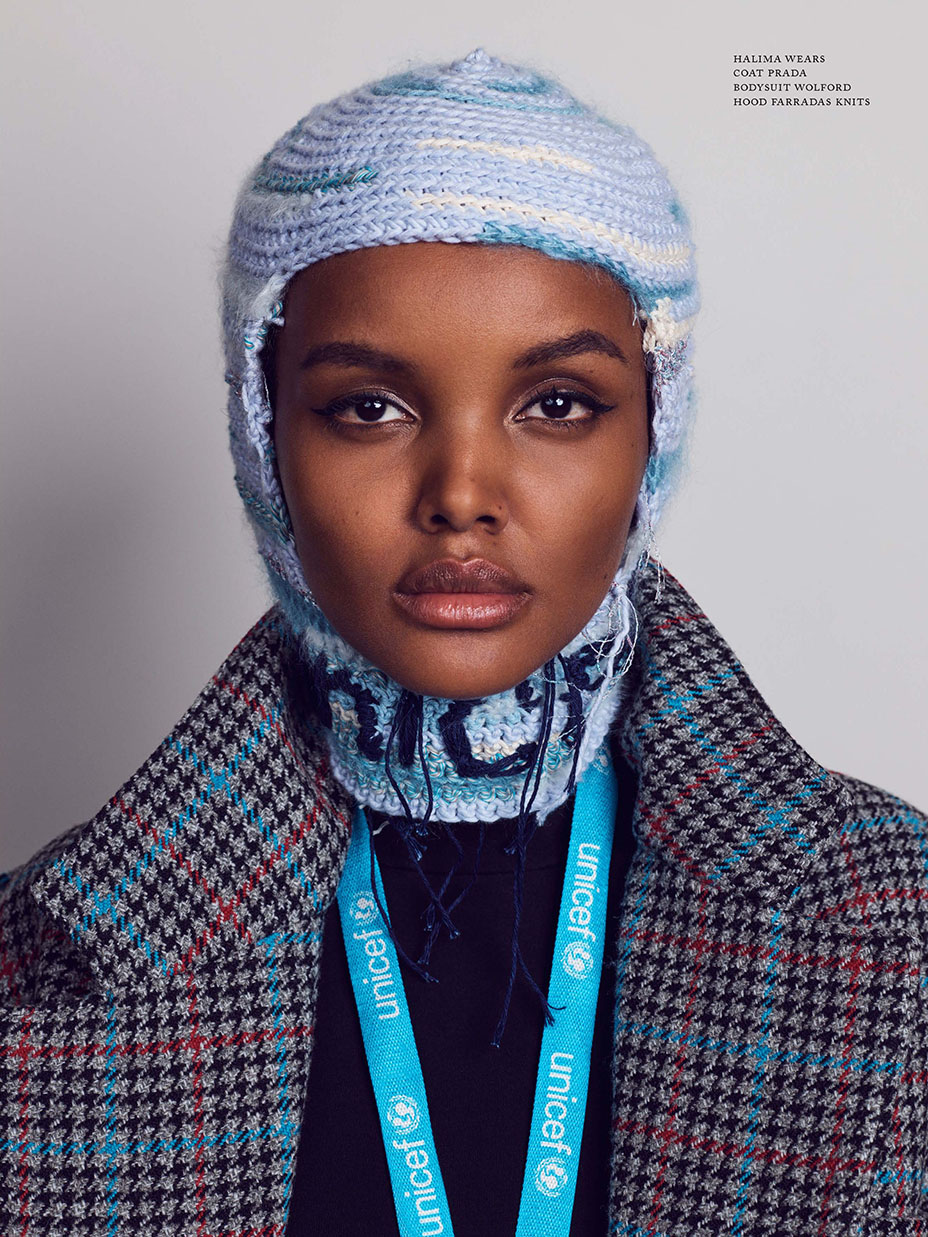 “I was six and I can still remember that UNICEF sign and every single missionary who came to the camp. I forget names, but can never forget how they made me feel,” says Aden, adding that on coming to America, “I honestly thought money grew on trees and that we would move into a big house. That’s what you see on TV. We moved to St. Louis and it wasn’t easy. The area that we lived in was very crime-filled. The school didn’t have an ESL program, so every day I went to school and learned nothing.”

“The first six months of living in America, I actually wanted nothing more than to return to the camp. Isn’t that insane?” Aden continues. “My mom used to say that ‘home spit us out and wouldn’t let us return.’ That’s why every refugee longs for acceptance. Will I be welcomed with open arms, or will I be sent back, or will I endure something even worse?” 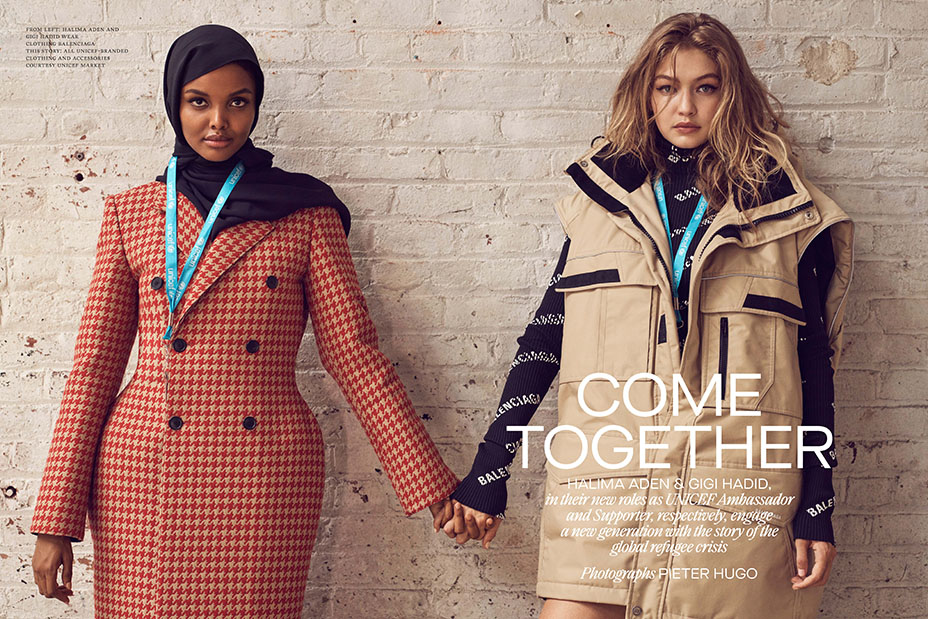 Both Hadid and Aden are involved in UNICEF USA, Hadid as a supporter who recently visited and Instagrammed to her 42 million followers the Jamtoli Refugee Camp in Bangladesh, and Aden as an ambassador who has spoken on behalf of the organization often, including in July when she returned to Kakuma, the Kenyan refugee camp where she was born after her family fled the civil war in Somalia.

In the issue, Aden sits down with President and CEO of UNICEF, Caryl M. Stern to discuss how the fashion industry can help. (In recent months and years, Kering, Louis Vuitton, VF, H&M, Primark and other top brands, both in the luxury and fast fashion spaces, have partnered with the organization to raise funds and awareness, including about the plight of children who work in and are exploited by the garment industry.)

Roitfeld has a long relationship with Hadid; she gave the Hollywood-pedigreed model her first magazine cover on CR Fashion Book. Featuring Aden, who was signed to IMG Models after she became the first contestant to wear a hijab in the 2016 Miss Minnesota pageant, was a no brainer. “She is a ‘new’ beauty and diversity within the industry. I am inspired by people who are unfiltered and multitalented-people like Cardi B, Zendaya, Kim Kardashian, Paris Jackson who have all been CR cover stars,” Roitfeld says. “I think it’s important to take risks and work with people that don’t fit this mold that everyone is obsessed with.”

When asked about the shaky status of fashion magazine publishing, of which she has been a part for three decades, Roitfeld was introspective. (CR Fashion Book is part of Hearst Digital Group. CR Fashion Book Ltd., led by the industry icon’s son Vladimir Restoin Roitfeld, publishes the biannual print magazine. Also at Hearst, Roitfeld is global fashion director of Harper’s Bazaar, where she styled the magazine’s series of September celebrity ICONS covers.)

“It’s difficult for me to talk about the future because things are constantly changing. Over 15 years ago I was asked this question while everyone was going digital and no one knew what was going to happen. Print survived then and it’s still trying to survive now,” she says. “Today we are up against social media, which is a blessing and curse. People have much more access in real time — they don’t want to wait until an issue hits stands to read something. I think maybe some magazines will stay but they have to be very beautiful, like a collector’s item. They have to feature people and topics that are unique, that stand out but also resonate globally.”