It’s safe to say Singapore is a character in its own right in the hotly anticipated rom-com Crazy Rich Asians, which is set to bow Wednesday. Although a little over half of the production time was spent shooting in Kuala Lumpur, Malaysia, it’s the island city-state that is made a star by the silver-screen spectacle, written by author Kevin Kwan and directed by Jon M. Chu.

“We wanted to create a travelogue through environments, décor and food,” says production designer Nelson Coates of the film, rich in visual treats.

“The combination of modern, rich and glamorous lifestyles with street fare and all things quirky makes it a perfect backdrop,” actress Amy Cheng, who plays Jacqueline Ling, says of Singapore, which has the highest percentage of millionaires on the globe.

Inside the "Gigantic, Fabulous, Amazing" Costumes and Sets of 'Crazy Rich Asians'

Walking in the footsteps of castmembers Constance Wu, Henry Golding and Michelle Yeoh is easy, especially because Singapore is so easy to get around. The walking city has super-clean streets, sidewalks and numerous English-speaking taxis. But there are iconic attractions from the film best experienced on foot, including Esplanade Park, the lotus-shaped ArtScience Museum, the water-spitting Merlion statue (half lion, half fish), and one of the plot’s key locations, Gardens by the Bay, where the wedding party of the year for characters Colin Khoo (Chris Pang) and Araminta Lee (Sonoya Mizuno) is held.

When it was conceptualized in 2005, the exquisitely manicured 250-acre nature park helped cement the Singaporean government’s vision of the island as a garden city. “A visit to Singapore is incomplete without a visit to Gardens by the Bay, where you can get an up-close and personal look at one of the most well-curated flora and fauna gardens in the world,” says Koh Chieng Mun, who plays Neena Goh. (It is best enjoyed in its full glory during the Singapore Garden Festival each July.)

Garden aficionados should also check out the TreeTop Walk and Hort Park, even though they didn’t make the film, according to Tan Kheng Hua, who plays Kerry Chu. “Singapore does manmade greenery like no other country I know — so pristine, well thought out and beautifully planned for the usage of its people.”

Supertree Grove, a tree-like vertical garden with an aerial walkway called the OCBC Skyway, is spectacular at night (there were several that Chu spent filming there with hundreds of extras). There’s a light and music show for tourists every evening. Production designers filled the beautifully restored early Gothic 19th-century CHIJMES Chapel (a former convent) — which already resembles a tiered fondant wedding cake inside — with drool-worthy plants and flowers for the big “I do.”

While it made a stunning stand-in for the fictional First Methodist Church of the book, CHIJMES is actually now a nightlife destination with plenty of bars and restaurants, and its stained glass-studded chapel is used as an event space. 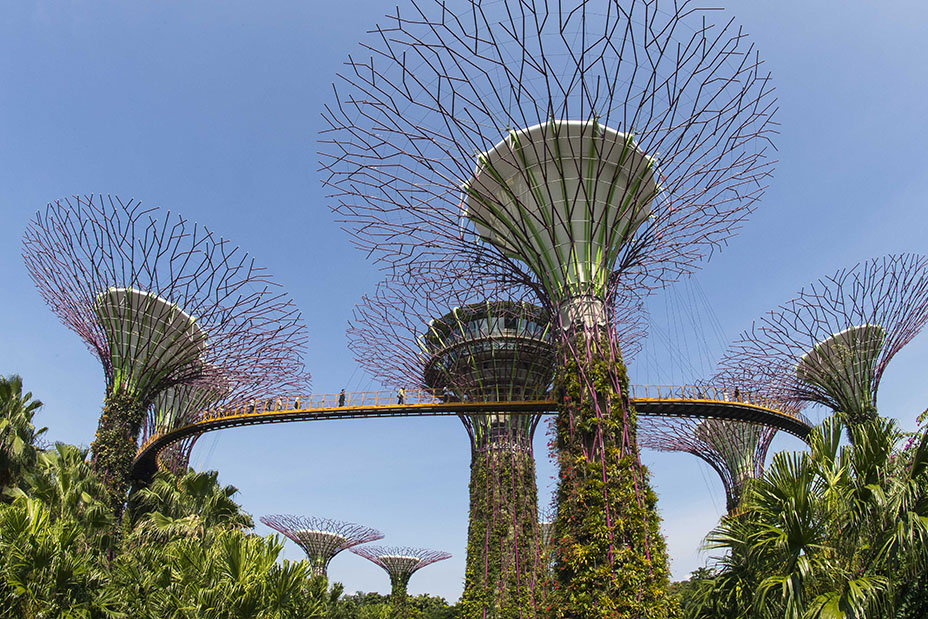 A twirl on the Singapore Flyer, the massive observation Ferris wheel (Asia’s largest at more than 500 feet) in Marina Bay, is a great way to get another kind of bird’s-eye view of the city’s skyline and layout. Marina Bay Sands SkyPark’s iconic infinity pool — a must for every visitor, even though it requires tickets and cocktail prices are outrageously inflated — was a location that took Chu nine months to secure government approval to shoot. The nighttime synchronized swimmers seen in the film are not actually on the menu here; however, plenty of enviable views and photo ops are. Fun fact: Marina Bay Sands is the world’s most Instagrammed hotel.

Bukit Pasoh Road, with its swath of hip restaurants, boutique hotels and shops, is recognizable from the scene where Rachel (Constance Wu) and Goh Peik Lin (Awkwafina) talk at an al fresco bar table at The Reading Room. And the city’s famous hawker stalls — essentially street food nirvana — figure prominently in a scene shortly after Nick (Golding) and Rachel arrive in Singapore, and join their friends for a feast at the renowned Newton Hawker Centre on Clemenceau Avenue, with floor after floor of cheap, savory dishes representing the melting pot of Singapore’s cultural influences from China, India and beyond. 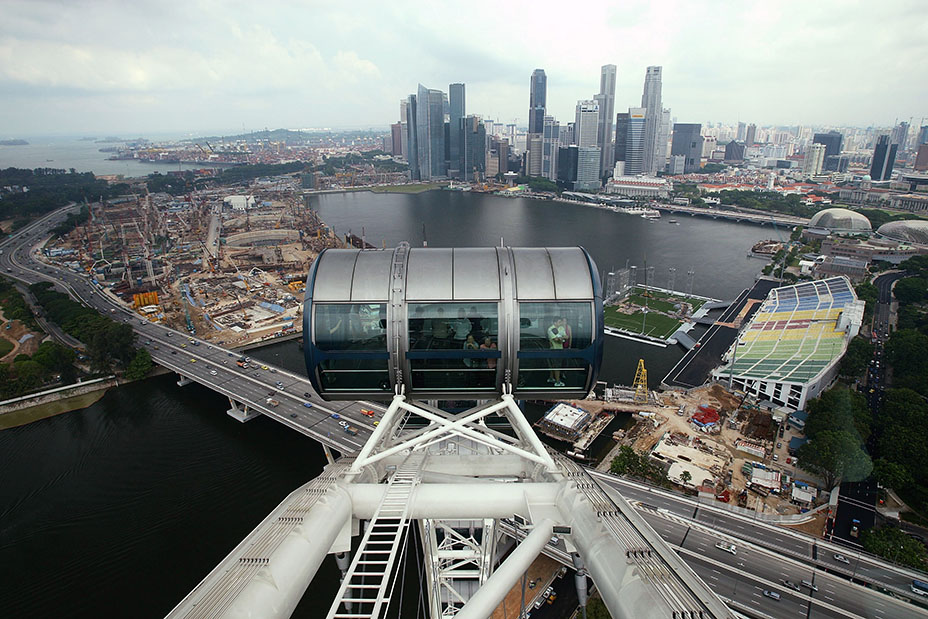 'Crazy Rich Asians': What the Critics Are Saying

Reopening in the first half of 2019 after extensive renovations, Raffles Singapore was featured prominently in several scenes in the film and is where some of the characters stay. Famously, it’s where the Singapore Sling cocktail was created, and its historic glamour is being restored carefully. Meanwhile, the O.G. Singapore Sling experience is available at a pop-up version of Long Bar next to the Raffles Gift Shop, which is open throughout the restoration. “It boasts a guest list of celebrities, writers and dignitaries such as Charlie Chaplin, Grace Kelly and Michael Jackson,” says Cheng, adding that legend has it a wild tiger once came to tea in its Bar and Billiard room! 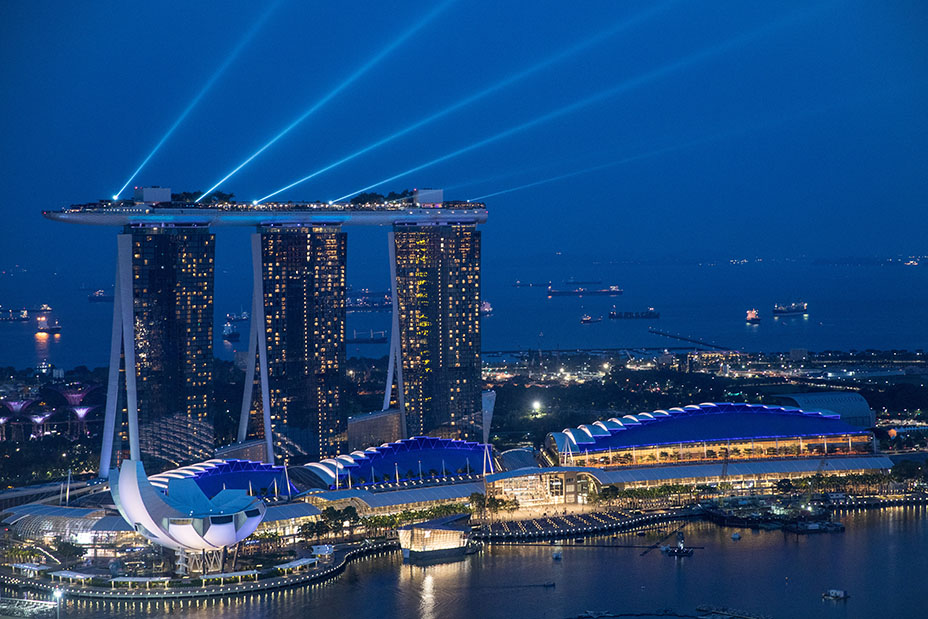 Though not featured in the film, another industry favorite hotel in the city is Capella Singapore, the opulent resort on lushly manicured Sentosa Island comprising two restored Tanah Merah colonial bungalows from the 1880s, with guest rooms and manors designed by Norman Foster. This year saw the opening of the hyper-luxe Chinatown-centric Six Senses Duxton, the brand’s first city hotel (intimate and sleek, with just 49 rooms), to be followed soon by the 120-room Six Senses Maxwell, debuting in October.

Of course, there’s already a totally customizable fan tour led by a local Crazy Rich Asians expert (since 2014) that includes stops at a variety of homes featured in the movie, along with Marina Bay Sands, Holland Village and other spots, with plenty of commentary on Singapore’s wealthy social set and history.

Though not highlighted in the film, a must when in Singapore is karaoke, which the cast indulged in during downtime on Orchard Road when they weren’t eating street food and dim sum. Xie also recommends a stop at her favorite haunt, the historical National Gallery Singapore, which boasts the world’s largest array of modern Southeast Asian art. It is “beautifully restored and links classical colonial buildings, the former Supreme Court and City Hall. It’s a feast for the senses, and also houses amazing restaurants like Violet Oon’s National Kitchen. It’s the best way to delve into our culturally exciting mix of Peranakan, Chinese, Indian and Malay flavored dishes, delectable in a homely way,” she says.

And, in Crazy Rich Asians form, a bit of shopping is advised. Xie loves Haji Lane, “a quirky little street lined with shop houses and colorful graffiti walls in the Kamong Glam area, where you can spend the whole day window shopping at local designers’ shops, stopping at cafes for some Teh Tarek and people-watching.”