John Lithgow plays the distinctive British prime minister Winston Churchill on Netflix’s period drama The Crown, which is nominated for an Emmy for best drama series. The 71-year-old star has been praised for his role, which also landed him an Emmy nom for best supporting actor in a drama series.

Aware of their height difference (Lithgow is 6-foot-4 and Churchill was 5-foot-7), the actor first prepared for the role by emailing costume designer Michele Clapton (also known for her work on Game of Thrones) to discuss wardrobe ideas in April 2015 before they even met.

In the email obtained by The Hollywood Reporter, Lithgow writes to Clapton to express that he’s ready to dress the part with “a suit of subtle padding in every scene (other than the bathtub scene) and to have all the costumes fitted to my padded body.” 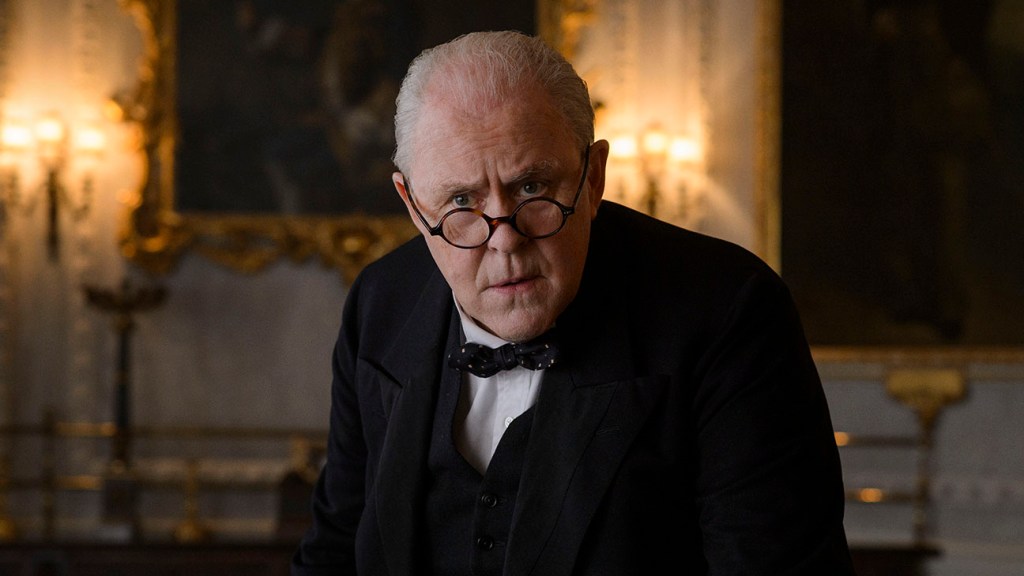 “I imagine padding that angles up from the shoulder to the neck, a little hunchy bulk across the top of his back, coats that narrow my own shoulders as much as possible, and tight shirt collars that fatten my neck and wattles,” continues Lithgow, who found in his research that Churchill had “a pot belly, slightly stooped posture,” as well as “a very short neck and narrow shoulders, a kind of pear shape, and his legs and feet seem rather dainty.”

The email also reveals Lithgow thinking about other outfit details that reflected Churchill, including those silk skivvies.

“Other things that caught my attention in reading about WSC are his unself-consciousness (he paraded around Chartwell nude), frumpy work clothes, and occasional flamboyance, sometimes approaching camp,” he writes. “His garish dressing gowns, slippers, little caps, and (did you know?) pink silk underwear that he was very picky about (no need to provide that).”

The actor concludes, “I actually think it’s important to underplay Churchill since everyone attributes so many oddities and idiosyncrasies to him. But I think we should take what we know about him and give ourselves lots of options.”

Lithgow’s interest in his character’s clothing proves that costumes do indeed assist with one’s performance. Now it’ll just be a matter of time before we find out if his investment in Churchill’s wardrobe will earn him an Emmy on Sept. 17.

Drama Actor Roundtable: Riz Ahmed, Ewan McGregor on Why Loser Roles Are "More Fun Than Someone Like Trump"