“When I was growing up, the Pride flag was a symbol of sanctuary,” says Jesse Tyler Ferguson. Now, as the Trump administration rejects requests to fly the rainbow banner on U.S. Embassy flagpoles (which have routinely displayed it during the month of June in recent years), Democratic candidates are putting out piles of Pride-focused merch to mark the traditional Pride month of June and also celebrate the 50th anniversary of the Stonewall rebellion — considered the dawning of LGBTQ awareness.

It’s hardly surprising that the Democratic hopefuls all have dedicated Pride assortments featuring the rainbow flag. “Thru the years I have been heartened by seeing so many allies embrace their pride for the LGBTQ community,” continues Ferguson, who contacted THR by email. “Displaying the rainbow sends a loud message that you are proud of your Lesbian, Gay, Bisexual, Transgender & Queer friends and family.” 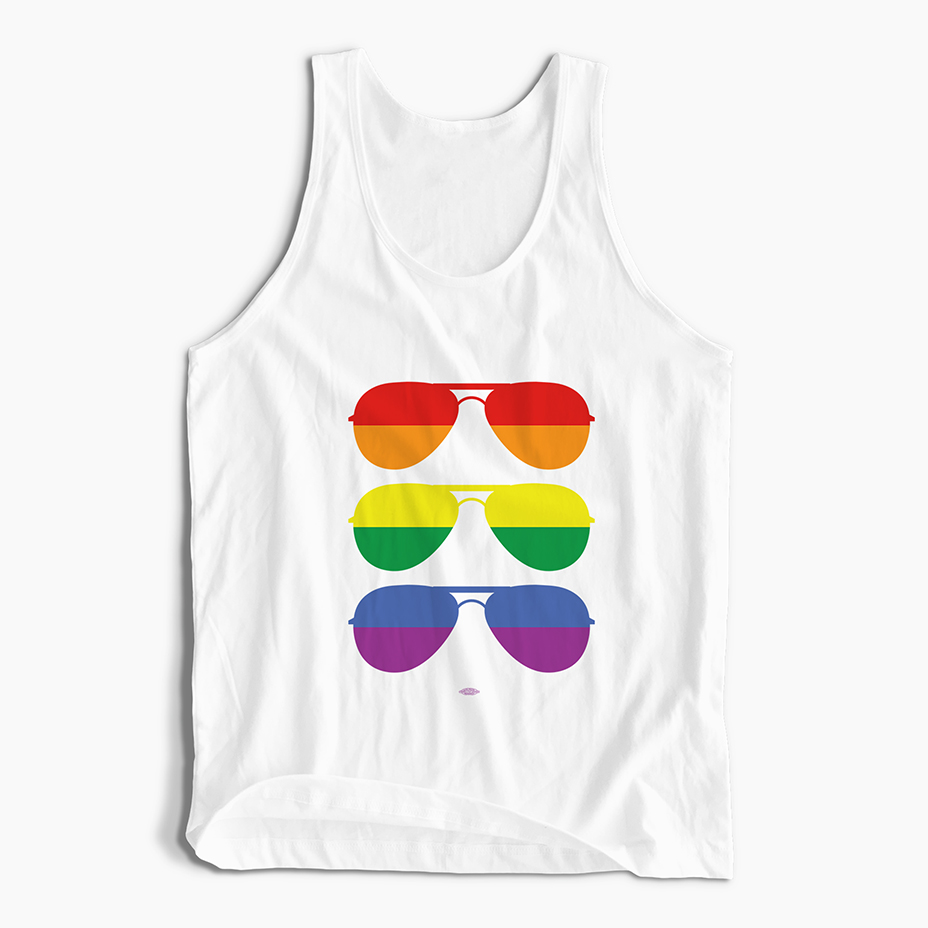 The merch of the top five Dem prospects ranges from a Joe Biden tank top that sports a rainbow graphic of the former veep’s signature aviator sunglasses to South Bend, Indiana Mayor Pete Buttigieg’s rucksack and tank top emblazoned with a cheeky guide to pronouncing his surname: Boot Edge Edge. Among Senator Elizabeth Warren’s offerings is a tote bag with the Massachusetts candidate’s motto “Persist” repeated in Pride flag hues. Senator Bernie Sanders’ and Senator Kamala Harris’ items feature their names spelled out in varied graphic styles. Each of the five candidates acknowledges transgender supporters as well, with variations on the pink, white and blue transgender rights flag.

“Throughout her career Kamala has stood shoulder to shoulder with the LGBTQ+ community,” says the Harris campaign’s Kirsten Allen. “Her campaign merchandise is just another reflection of the inclusive United States Kamala will govern.” 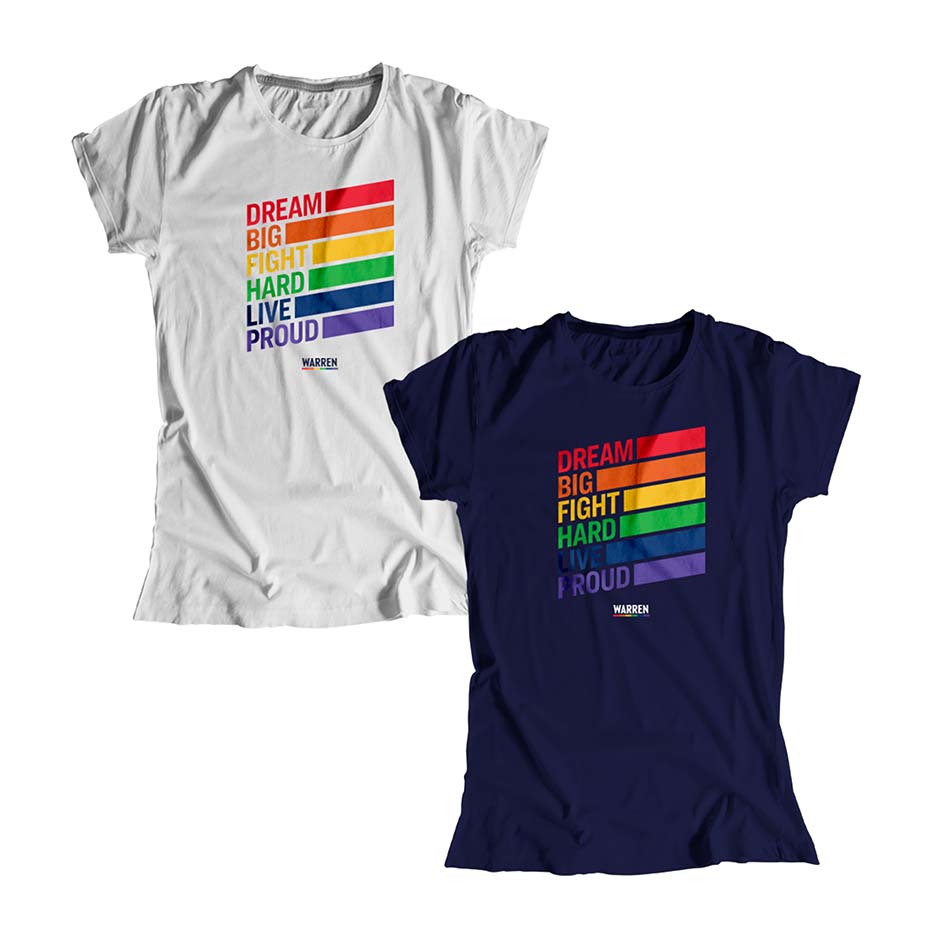 Buttigieg exclusively uses the more recent “woke” version of the Pride flag, with black and brown stripes added to represent persons of color, while the other campaigns toggle back and forth between that iteration and the familiar six-stripe version designed in 1978 by Gilbert Baker. (His original flag chose pink for sex, red for life, orange for healing, yellow for sunlight, green for nature, turquoise for magic, blue for serenity and purple for spirit; pink and turquoise were later dropped because of manufacturing challenges.).

“It would be surprising it the candidates weren’t doing this,” says Hollywood publicist and longtime LBGTQ advocate Howard Bragman. “It’s a fairly well-heeled voting block that is politically motivated and supports candidates,” especially visible since the Bill Clinton years.

Sean Adams, chair of the Graphic Design department at Los Angeles’ ArtCenter College of Design, says while there is a lot of similarity in the candidates’ designs, a few stand apart. “Seeing Joe Biden and his groovy glasses works. It sends a message of ‘I’m cool and I’m your friend.'” Adams says. “And the sunglasses one would be fun to wear.” Adams also likes that Biden’s campaign button that shows his face, too, “because it really places him as an individual human being, saying, ‘I’m part of this community.'” 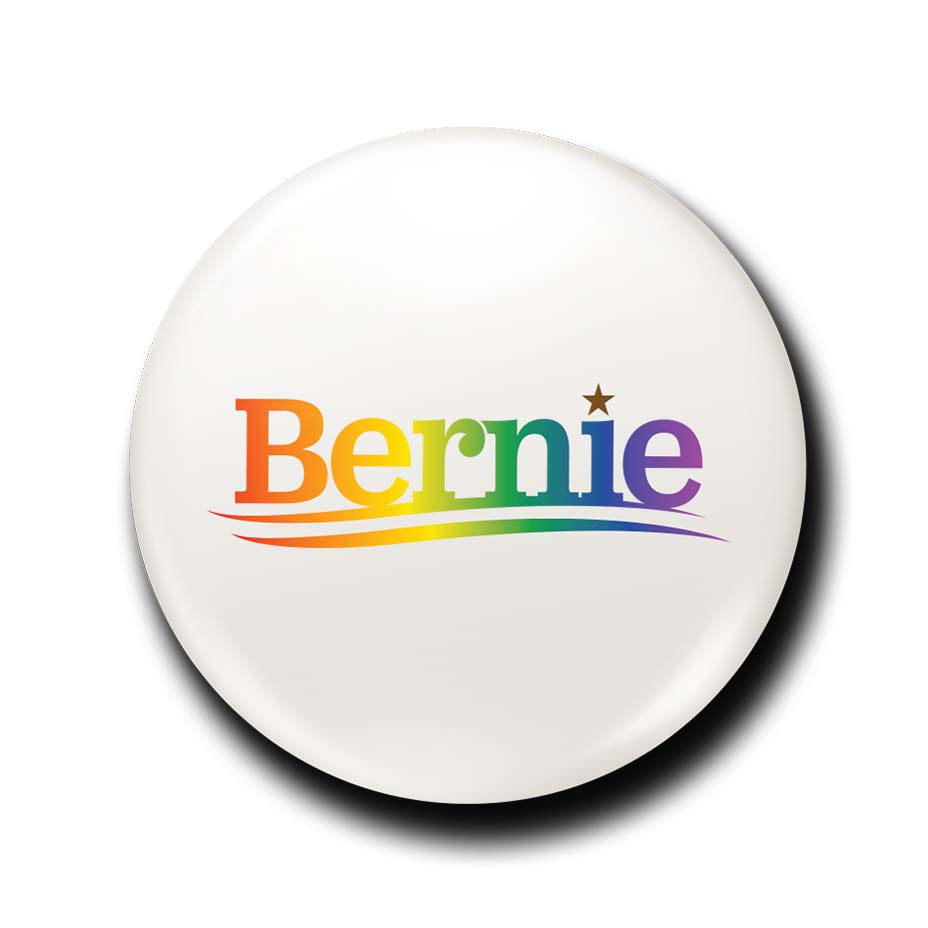 A Biden spokesman reiterated the point for The Hollywood Reporter, alluding to his early support of marriage equality as vice president, even before Barack Obama: “When political pundits said supporting same-sex marriage wasn’t a good idea, Biden spoke up for what he believed was right. He will continue to be a dedicated supporter of LGBTQ rights and fight for crucial legislation like the Equality Act.”

Adams also singles out Buttigieg’s tank top with an emblem and reference to Stonewall 50. “It’s not, ‘I’m Pete, I’m gay.’ That could [have been] the T-shirt. It’s like, ‘Let’s talk about something of substance that we can actually celebrate.’ It’s shows a deeper understanding of history and inclusiveness,” Adams says. “But the overriding message is that I’m so impressed that they all did this.”

A version of this story first appeared in the June 12 issue of The Hollywood Reporter magazine. To receive the magazine, click here to subscribe.