Continue to The Hollywood Reporter SKIP AD
You will be redirected back to your article in seconds
Skip to main content
October 17, 2019 1:04pm

Speaking to The Hollywood Reporter by phone from Milan, luxury footwear designer Manolo Blahnik (who now resides in Bath, England) commented on the long list of glamorous stars who he is currently obsessed with — Nicole Kidman (“Fantastic in Big Little Lies!”), Elisabeth Moss (“The actor’s actress; you see that in The Handmaid’s Tale“), Renée Zellweger (“I once escorted her to an event — all those photographers and people screaming at her, it was uncivilized!”), Anjelica Huston (“She is a dear old friend”) and Lupita Nyong’o (“I loved that film 12 Years a Slave!”).

After a recent screening of the 2017 Michael Roberts documentary Manolo: The Boy Who Made Shoes for Lizards at the Royal Monceau in Paris, the designer revisited his history in the French capital, where he opened his first stand-alone boutique in July. Blahnik reminisced to THR about his short, but prolific stay in Paris during the seminal 1968 riots until 1969 (when he decamped for Swinging London) — working in an antiques shop, while living with Paloma Picasso, as revealed in the film.

“The metro lines were shut down, and I walked miles to the antique shop that was in the center [of the riots]. I didn’t like all those crowds, people screaming, lighting things on fire, breaking glass, bad smells,” he recalls. Similarly, Blahnik encountered the recent Gilet Jaunes riots in Paris. “My God, I couldn’t get to the Champs Elysees because it was all shut off and it was absolutely hell! Same as ’68, people were breaking shops and lighting cars on fire. Of course, they can protest but I don’t like to see things like this.”

The 76-year-old Spanish designer collaborated with Rihanna on a series of capsule lines (ranging from denim sandals to bejeweled lucite gladiator sandals) in 2016 and 2017, and works regularly with Kate Bosworth, Karlie Kloss, Kate Moss and Uma Thurman, who he says is “one of my favorites – divine and beautiful, she is an Amazonian woman. Her mother Nena Thurman was just gorgeous!” And perhaps it was Netflix’s The Politician that reignited his passion for Jessica Lange. “She is my favorite actress in the world. She is fantastic!” adding, “I met her when I was young in Paris, hanging around Karl Lagerfeld and that group of people and she has been the same girl the whole time, still fantastic.”

During his pivotal time in Paris  (when Blahnik recalls dancing at the infamous Chez Castel — “We used to dance all night! [That’s] why my feet are shuffling as I am talking to you!” — and later dancing with Catherine Deneuve’s sister Françoise Dorléac), he fell in love with the Palais Royale with its court-like garden: “I can’t believe I am doing a shop in the Palais Royale at my age. I’ve been proposed other locations before, but the Palais Royale is the only place I would go. I discovered it as a student passing by these wonderful old shops selling military artifacts and antiques.” 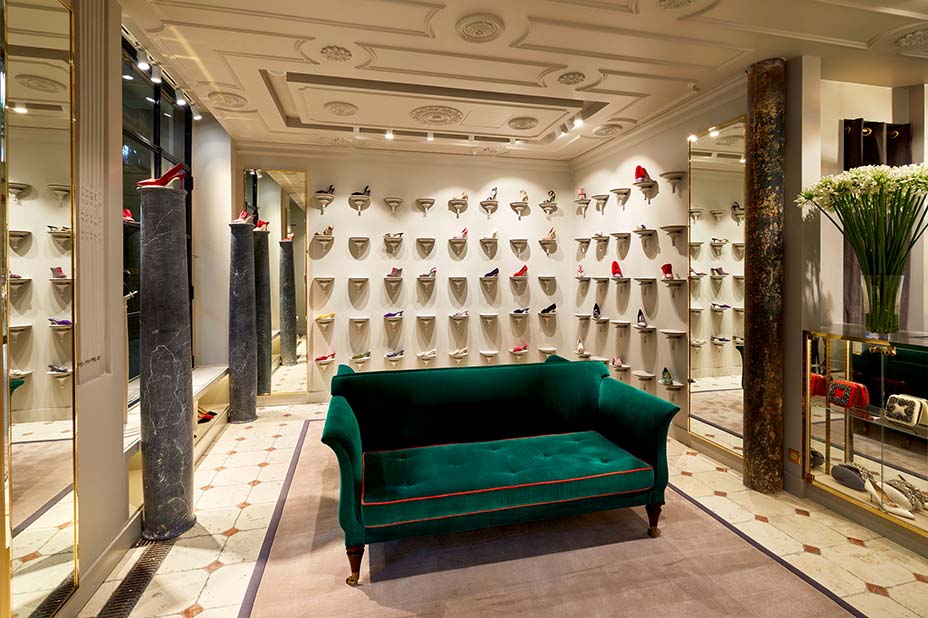 In fact, the location of the Manolo Blahnik shop is in the former Café Corrazza, famous as one of the spots where the first ideas for the French Revolution began and a mainstay of Napoleon’s circle thereafter. “Empress Josephine used to come here with her ladies of the court; extraordinary things have taken place there, which make me more inspired by the place!” said Blahnik.

In a tribute to this era and the shoes he designed for Kirsten Dunst’s portrayal of Marie Antoinette in Sofia Coppola’s 2006 film of that title, the designer created a special Parisian collection for the new store. Consisting of nine styles, Blahnik teases that his spring 2020 line will be even more French. The simple decor of the intimate space (“It’s as big as your bathroom!”) that Blahnik designed includes 100 Georgian wall sconces, a spacious green velvet sofa, sketches by the designer and an upstairs men’s salon. 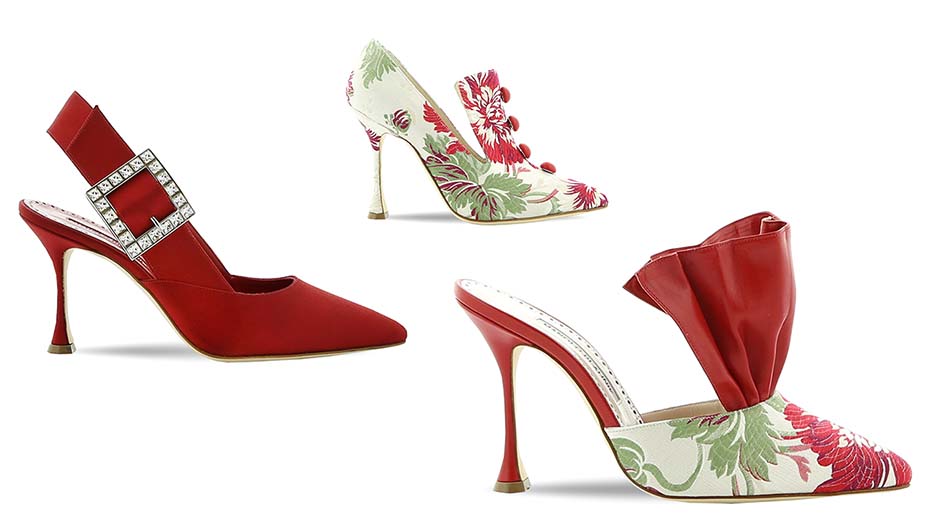 While today’s icons delight Mr. Blahnik, he is thoroughly “mad” for old Hollywood. “Ask me a name of a show today and I won’t remember [it], just whether I liked it or not. But I can name any Rita Hayworth [character and describe the] movie in detail, for instance. I just adore Gilda.” Blahnik is also a fan of Hitchcock: “Tippi Hedren wasn’t a great actress, but she was a great in The Birds and Marnie, where she played a kleptomaniac,” he says, also noting “Kim Novak and James Stewart in Vertigo is that one I really know everything about: the music, the dialogue, the scene when she sits in the museum. Hollywood was my education when I was young — that and Vogue, Harper’s Bazaar and Mrs. Vreeland!”

As awards season gears up, it is safe to say that many of the fancy shoes spotted on the red carpet will be Manolos. As for what to pair with them, Blahnik says, “I think they should all wear hot pants — do you remember those? — or dresses with huge slits. And I love tall girls with heels! The taller, the chicer. Though really what’s important is the way that you carry yourself. High heels help you to move differently.”

And the designer confesses to missing the commentary of late comedian and E! Fashion Police host Joan Rivers on the carpet: “I used to love ‘mad’ people like Joan Rivers and her daughter [Melissa] discussing the red carpet, like ‘Oh that dress is horrible!’ Now it’s too serious.”

As for his own turn in front of the camera while filming Manolo, The Boy Who Made Shoes for Lizards, Blahnik says: “It was extraordinary! It didn’t feel like I was in front of the camera, because I was just talking to my friend Michael so it was a fun, natural experience, but also a nightmare at times. The movie may be a perception of me that isn’t exactly who or what I am, but this is what a movie can do. You capture what you want to. I think though people will see I am a little bit neurotic; I don’t stop moving!”

The designer says that he finds the creative process of designing shoes and films akin to one another: “It is a similar concept of creating a shoe because you think about it and then realize it. I saw something extraordinary in Michael’s work; he is a great artist, photographer, painter and storyteller.”

Another project that Blahnik has in the works is a foundation that he hopes will inform and enlighten young designers about his work and the references he draws upon. “My generation is going out very soon, so I’d like to make a foundation to help two or three young talents to support the next [generation],” he says. “It’s very important to have references explained by someone who knows and can explain the context of the information out there, thanks to the digital world.”

Popular culture has made the legendary Spanish cobbler a household name, but he doesn’t quite see what all the fuss is about. When his footwear went on display at London’s prestigious Wallace Collection alongside 18th-century and Medieval masterpieces that inspired him, as part of the exhibition An Enquiring Mind: Manolo Blahnik at the Wallace Collection (extended by popular demand through Oct. 27) , Blahnik admitted, “At the beginning, I thought it was pretentious to pair my shoes with that art that I adore. I’m just a shoemaker!” 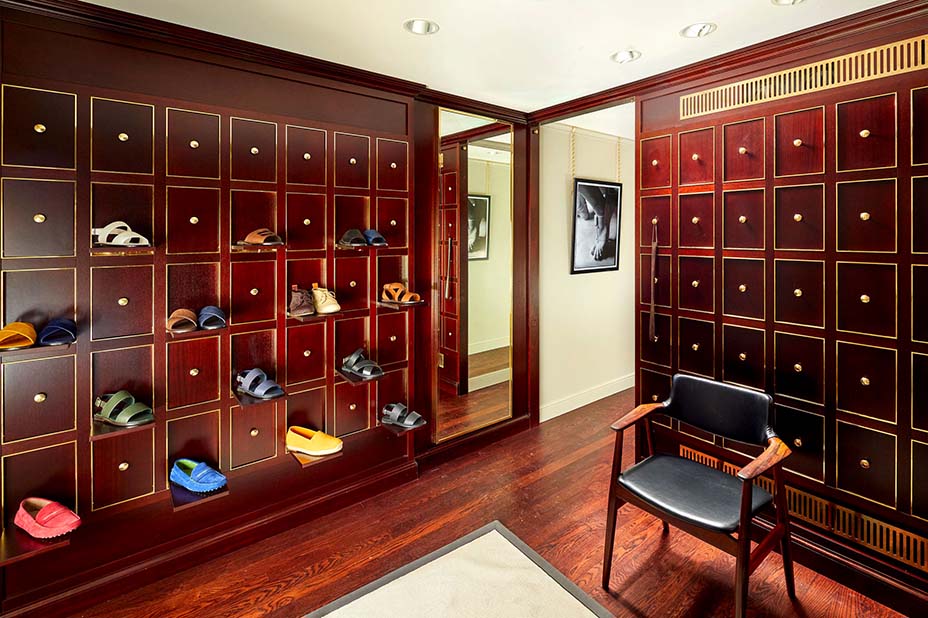