With the recent passing of Karl Lagerfeld, chatter in the fashion world has turned to the end of eras, where style is concerned. But as fall 2019 Paris Fashion Week shows got into full swing on Tuesday, two particular eras proved their ever-lasting appeal: the ’50s and the ’80s.

For Dior’s Maria Grazia Chiuri, feminism has been the battle cry since she became the first female creative director of the famed French fashion house in 2016. This season was no different in that regard. Her show at the Musee Rodin opened with 88-year-old artist Bianca Pucciarelli Menna (who worked under the male pseudonym Tomaso Binga in the heavily sexist art world of the 1970s) reading a poem in Italian that spoke of a time when women would reign victorious over male governance in society. In the background were photographs taken by the artist of her naked body in letter-like poses spelling out “Dior” and the words to one of her poems.

Be among the first to see how the Autumn-Winter 2019-2020 show by #MariaGraziaChiuri draws on the ABCs. Each letter represents a different woman, forming a poem made of an alphabet by the Italian artist Tomaso Binga, a woman who chose a masculine pseudonym to parody the privileges reserved to men alone. #DiorAW19 © @AdrienDirand

The latest iteration of the luxury brand’s feminist-forward silkscreened T-shirts paid tribute to 78-year-old feminist poet Robin Morgan, referencing her three anthologies: Sisterhood Is Powerful in 1970 (said to have helped spark the feminist movement in America), Sisterhood Is Global in 1984 and Sisterhood Is Forever in 2003.

Revisiting Dior house codes, Grazia Chiuri evoked brand signatures (Bar jackets and New Look skirts) as seen through the lens of 1950s Teddy Girls. “The queens of a ravaged landscape, Teddy Girls were impertinent characters with wild quiffs who wore Edwardian-style men’s jackets with velvet scarves, ample skirts, jeans and black leather jackets,” read show notes. (Leather, first introduced to Dior by Yves Saint Laurent in the 1950s, added an edge to belted jackets, overcoats, pants, bucket hats and a sleek blouse, while buffalo check prints in an array of colors were strikingly used on jackets, dresses and bucket hats). The rebel spirit of Princess Margaret posing for a portrait on her 21st birthday in 1951 in a Dior dress, rather than a design by a British dressmaker, also served as inspiration for the collection (highlighted in the Christian Dior: Designer of Dreams exhibition, now on display at the Victoria and Albert Museum in London and running through July 9). 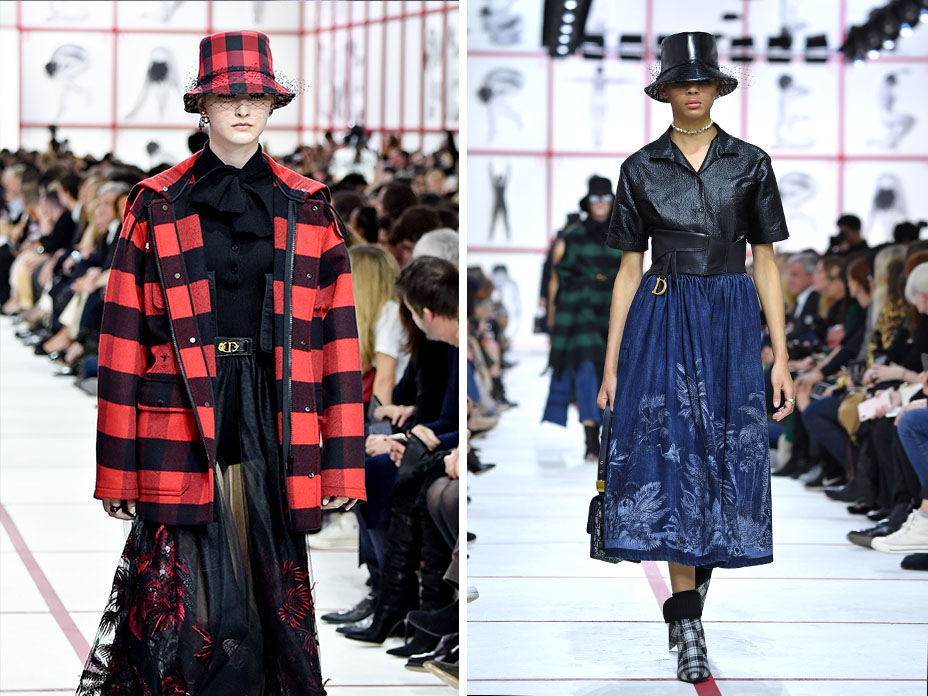 For the Italian designer, feminism means unburdening oneself from the task of getting dressed. And a key 1950s underpinning — the romper — did just that as a wardrobe foundation to pair with pants and Bar jackets by day and switch out with a tulle embroidered skirt for evening. Utilitarian denim was elevated into a pleated skirt fashioned as toile de Jouy, which also showed up in the form of jacquards, embroideries and knits. Models donned heavy eyeliner (favored by Teddy Girls and the designer herself), cat-eye sunglasses, plaid kitten-heel booties and the delightful bucket hats by British milliner Stephen Jones — a solution to not worrying too much about one’s hair.

Since arriving at Saint Laurent in 2016, Anthony Vaccarello has made super-sexy, short party dresses a signature along with a continuation of the rock ‘n’ roll vibe brought to the house by his predecessor, Hedi Slimane. While the dresses continued for fall 2019, it was the tailored looks (with an emphasis on a bold and bolder ’80s shoulder) that stood out most. He opened the show with a series of long wool overcoats — one a rich creamy white on a model who channeled famous Yves Saint Laurent muse and confidant, Betty Catroux, complete with side-swept platinum hair and oversized black glasses. There was also a sharp-shouldered iteration of the tailored Le Smoking suit that took a turn on the runway (riffing on Bianca Jagger’s iconic white Yves Saint Laurent suit, worn for her 1971 wedding to Mick Jagger) but with a new higher black sash waist and narrow leg trouser. 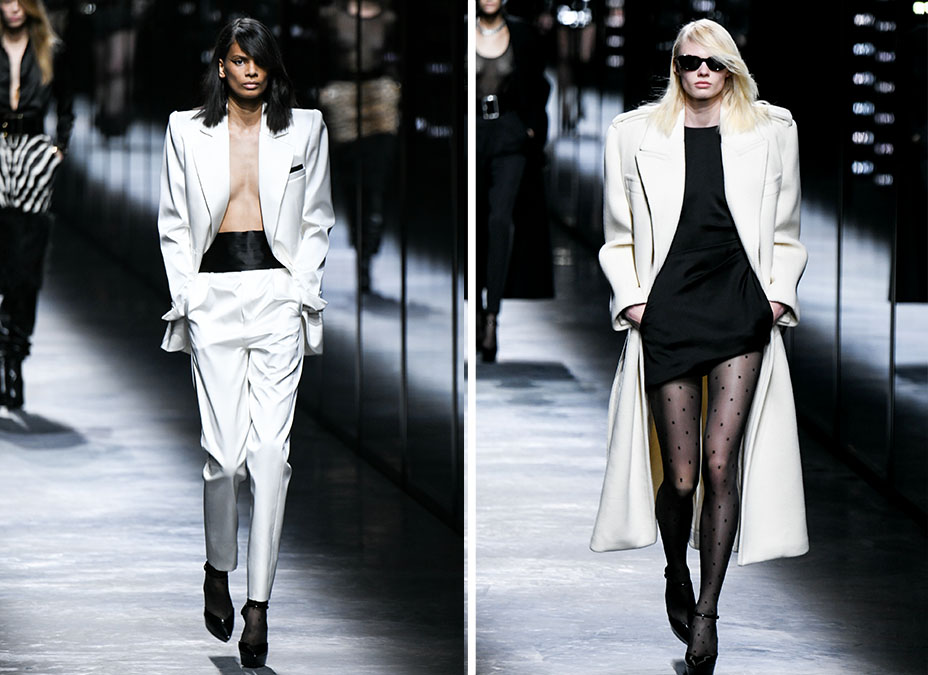 Le Smoking also appeared as an evening gown and a roomy double-breasted jacket worn (in a favorite ’80s styling trick) as a mini dress. The house’s signature side bow minis appeared throughout the show in sequins and satin, and a blouson short-short looked particularly fresh — harkening back to the YSL Opium period and proposed as a new way to show  some leg (albeit covered in point d’esprit hosiery on the catwalk). Belted at the waist, the shorts were paired with velvet or sequined smoking and bolero jackets and topped off with fedoras for a glam rock look. The perfect crowd-pleasing ruffled blouses, dresses and skirts could almost be heard making a “ca-ching” sound as they swished by. Stripes injected some playfulness into the offerings for the Saint Laurent man.

In case you couldn’t have imagined where to wear the clothes, especially those with plenty of sparkle and frou (and there was no mistake that Vaccarello loves his marabous and fur, despite recent industry and public grumblings), the designer put them in their natural habitat with models passing through a tunnel of black light for a nightclub effect. Clothes were hard to see (save for pops of neon pink, orange, yellow and green) under the blue hue of the lights. A welcome nod to escapism. 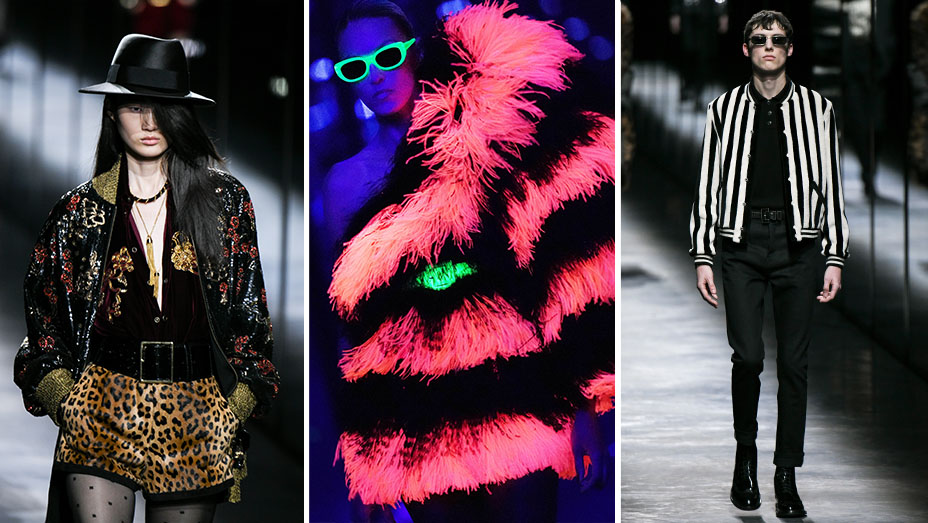