In the last of the big shows at Milan Fashion Week on Sunday, Dolce & Gabbana delivered a heaping helping of femininity Italian-style, with a collection that was pure joy in its rich details, from the rainbow raffia-trimmed hats, to the bejeweled shoes with a single pearl on the tip of the toe.

The message on the runway here, as it has been in most of the shows this week in Milan? Put on a happy face, no matter what cards you are dealt, hence the Queen of Hearts prints and the shuffling cards set piece at the top of the runway.

The title of the collection was “Amore e Belezza (love is beauty), which translated into a rededication to the brand’s love affair with La Dolce Vita and all that comes with it — food, family and costumed festivals, with witty prints and embellishments nodding to all three. 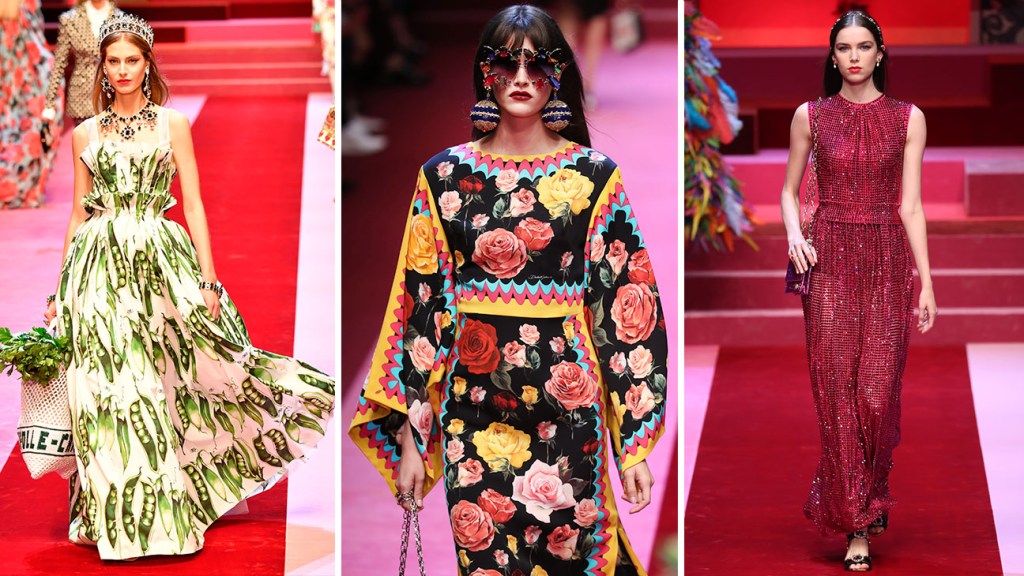 As go-to designers for First Lady Melania Trump, Domenico Dolce and Stefano Gabbana presented plenty of options for women for whom money is no object, including a flower-applique jacket that was strikingly similar to the $51,500 full-length version worn by Trump during a trip to Sicily this spring.

They offset romantic 1950s inspired print dresses (who but they could make wearing peapods chic?) with a few sharp pantsuits, one in a red-and-black stripe. And for evening, their crystal mesh gowns in vivid colors of red, orange, pink or green shined like jewelry. 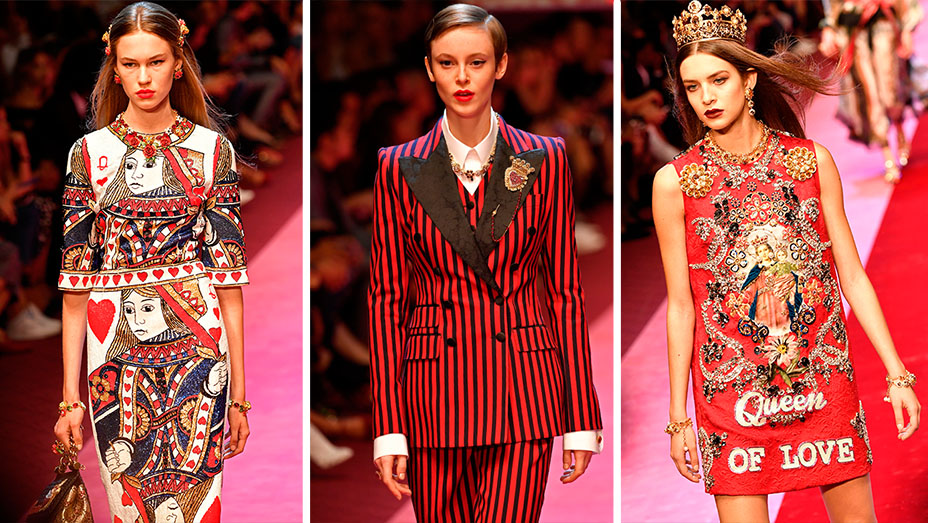 What was particularly fun to watch was how they maximized every look, right down to the raffia-trimmed round sunglasses. (Another pair of sunnies had tromp l’oeil manicured fingers on the stems). The front row was full of eye-candy, too, including Cameron Dallas and several children-of, including Myles O’Neal (dad is Shaquille), Christian Combs (dad is Sean) and Rafferty Law (dad is Jude). With Dolce & Gabbana, it’s always a feast.

The same can be said of Missoni, the family-run business which this season celebrated Angela Missoni’s 20 years as creative director of the brand her parents Ottavio and Rosita founded in 1953 as a small knitwear label, and eventually took global. 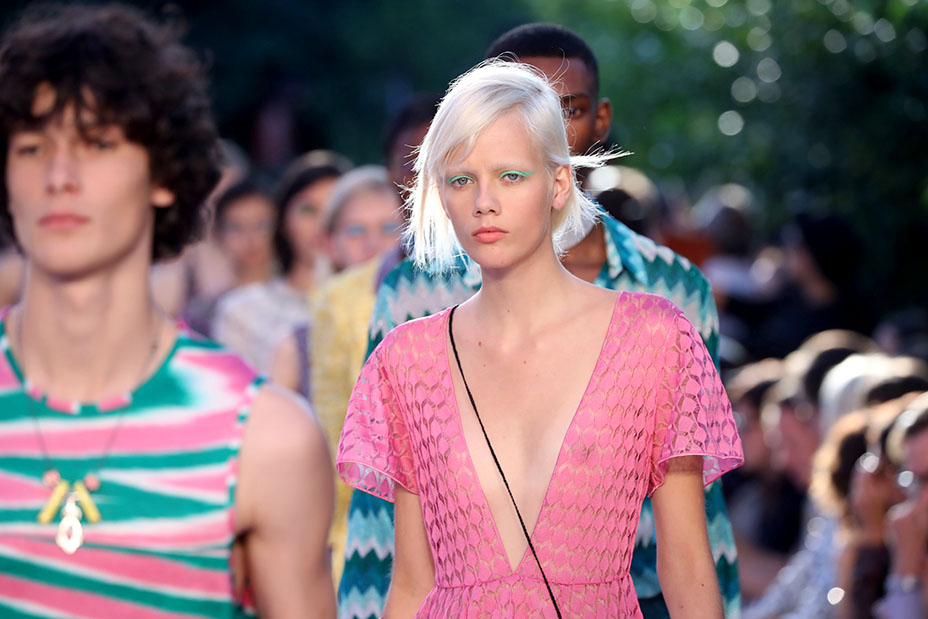 Held outdoors under cheerful rainbow-patchwork tents evoking the colors of the brand, the Saturday afternoon show celebrated Missoni heritage in a variety of silhouettes, lengths and volumes spanning the ages, including women’s bodysuits, maxi skirts paired with bra tops, and high-waist briefs under see-through dresses; men’s color-blocked tank tops, button-down shirts and shorts. The designer made ample use of Missoni’s signature stripes, lines and zigzags in every color of the paint box, some shimmering with Lurex, and reminded those watching of all she’s accomplished. 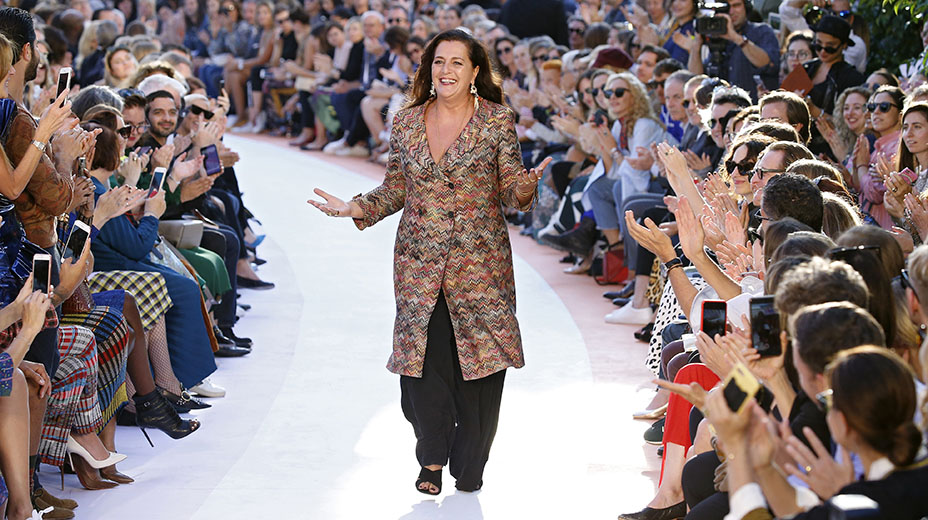 Angela has a special affinity for Los Angeles, where she will be in a week’s time, she said Saturday night at a celebratory dinner. The last time we met there was in 2011, when her dear friend Quincy Jones presented the Rodeo Drive Walk of Style Award to what he dubbed the “Sumirago posse” — a reference to the family’s hometown about an hour northwest of Milan — and said the colors and patterns of Missoni designs “are like the notes of a beautiful love song.” 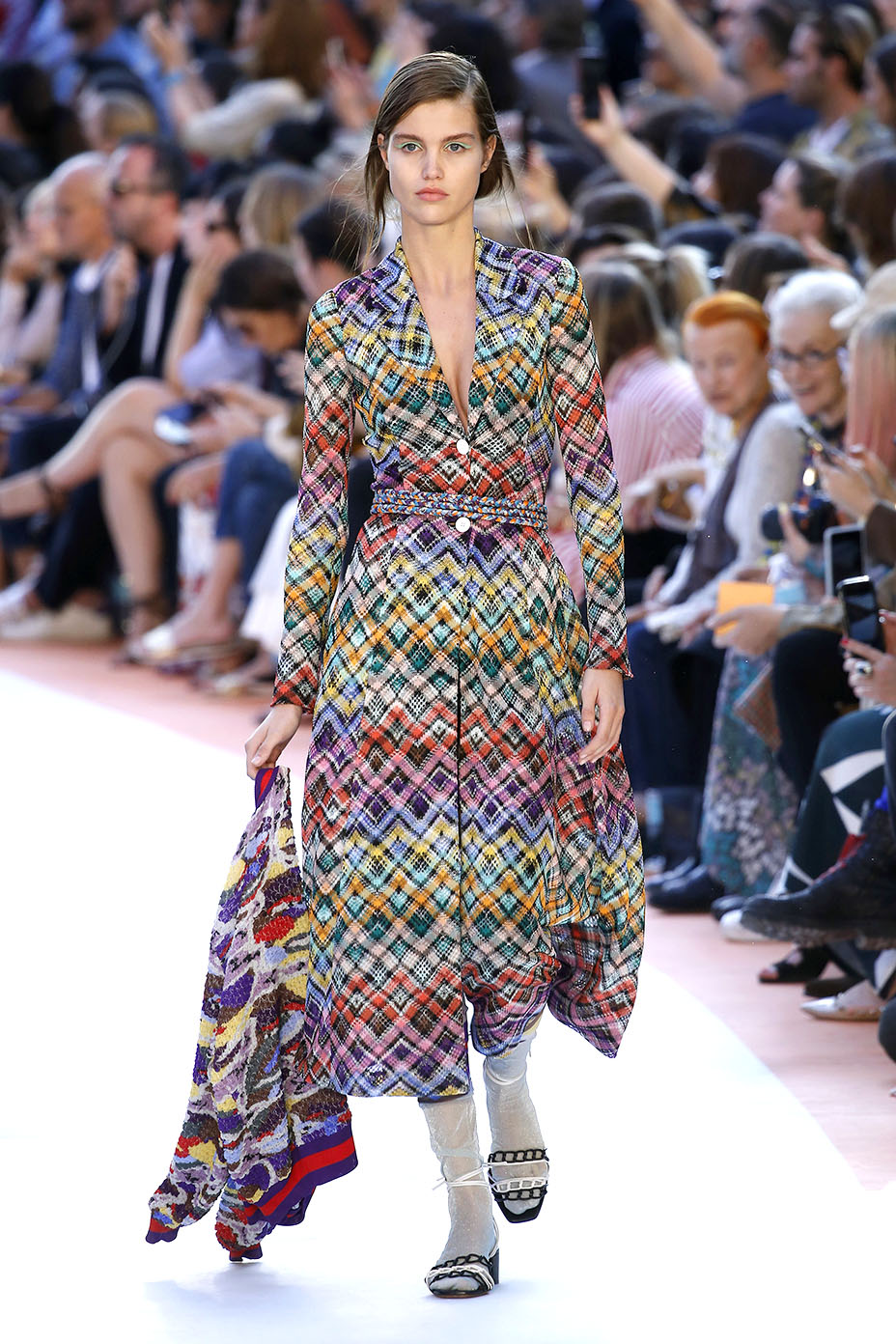 “Since then, I’m a grandmother two times,” Angela joked, referring to the two young children of daughter Margherita Maccapani Missoni Amos, who has her own Margherita Kids clothing line, as well as a collaboration with Pottery Barn Kids. And yet, she seems as energetic as ever.

The not-so-subtle statue in front of Milan’s Stock Exchange is the backdrop for the @Ferragamo show #MFW pic.twitter.com/cur6hXfXLJ

Variety was also paramount in the Ferragamo colorful spring collection, staged on a verdant, grassy runway set that seemed to be an optimistic answer to Piazza Affari’s famous landmark — a giant middle-finger statue. 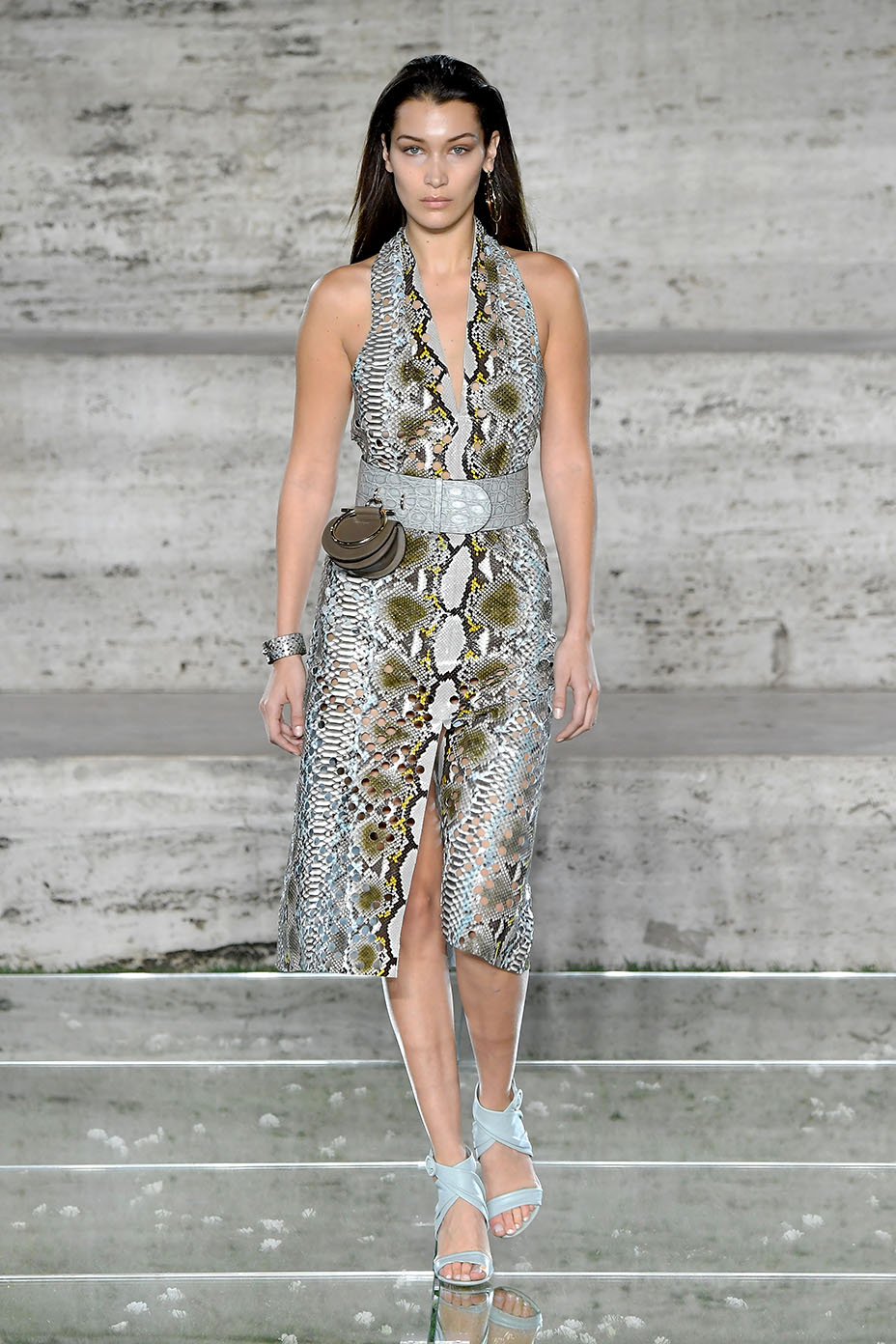 On the runway, design director Fulvio Rigoni was inspired by the house’s Hollywood heritage as a shoemaker to the stars, specifically the uniqueness of the women who wore Salvatore Ferragamo shoes, including Greta Garbo, Carmen Miranda, Brigitte Bardot, Eva Peron and Marilyn Monroe, according to the notes, though that wasn’t totally apparent.

What he was specifically looking to do was create pieces that could be mixed-and-matched according to individual whim, drawing from throughout fashion history, including pencil skirts from the ‘20s, fringe from the ‘30s and flares from the ‘70s, all in a vivid palette of geranium pink, emerald green, bright red and plum, tempered by pastels and white. 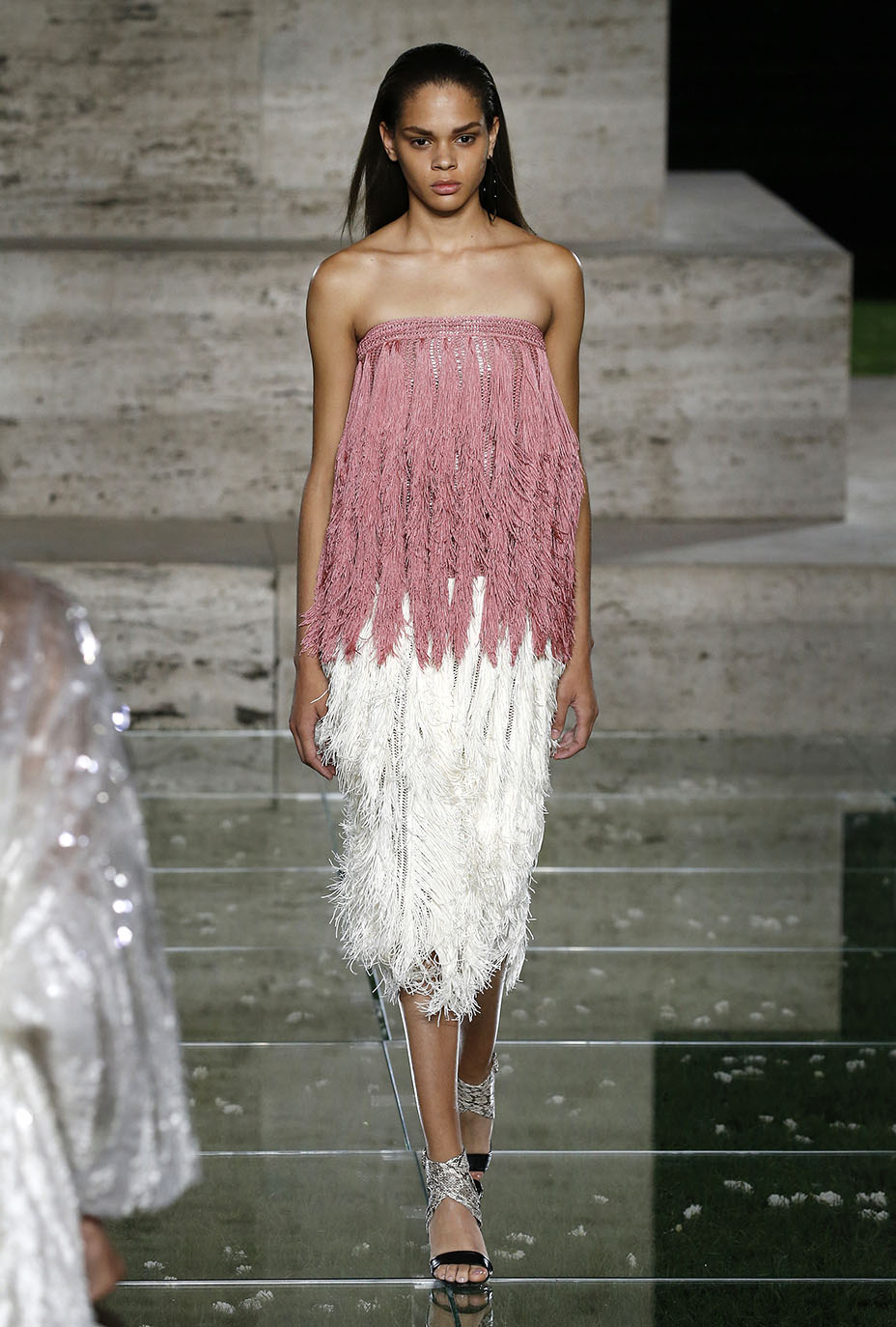 Of course, this being Ferragamo, there were some fab shoes, now designed by Paul Andrew, including colorful python boots, wedge sandals and mules featuring the newly resurrected Ferragamo cage, and flower heels.

As Rigoni stated in the show notes, “No two women are the same. I wanted to celebrate women’s individuality and style, vivid colors — ever evolving femininity.” Mission accomplished. 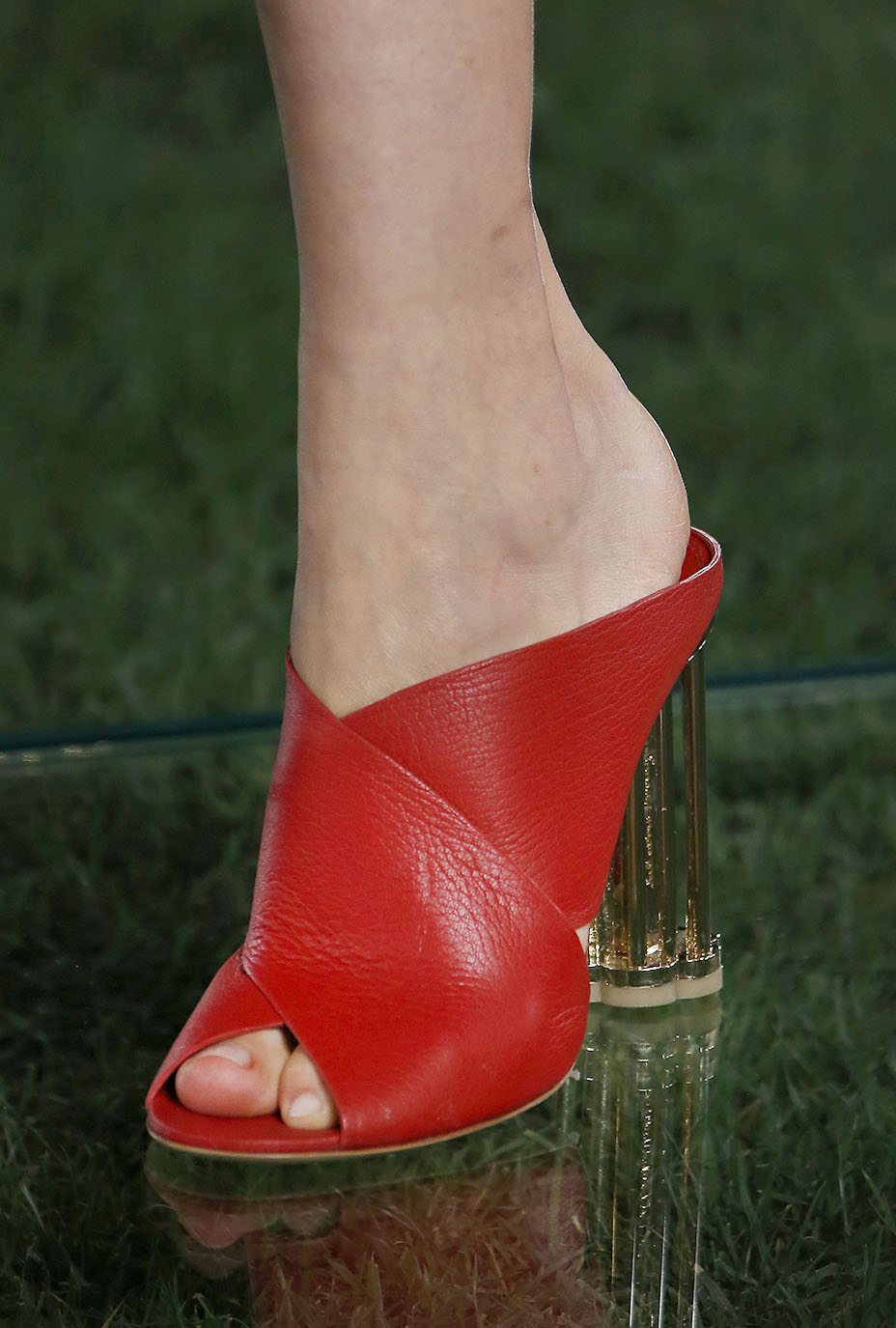