As Olivia Nuzzi pointed out in her New York Mag piece about Hope Hicks’ departure from the White House (and the paparazzi-tailed relationships she had inside it), not since the Clinton administration has Washington been such a hotbed for tabloid gossip.

The latest topic of hot goss is the impending divorce of Donald Jr. and Vanessa Trump, both 40, who have been married since 2005. The breakup was first reported last week by Page Six, and since then there has been a seemingly endless torrent of tasty news bites about what factors could have contributed to the split.

The Royal Wedding Cake Will Be Baked By Californian Pastry Chef

Such factors would have come on top of the inevitable strains on the couple’s new life in Washington, where they have been the focus of an investigation into Don Jr.’s role in dealings with Russia during his father’s 2016 presidential campaign and an anthrax scare that sent Vanessa to the hospital (she was cleared; the mysterious white powder was not anthrax). Not to mention, they are also dealing with the more traditional marital stressors of raising five children and simultaneously teaching them about socialism.

On Friday, Vanessa hired lawyer David Feureisen (a choice that raised a few eyebrows, considering he also has a background in criminal defense) to represent her in the proceedings. However, for the most part, she has remained quiet, simply doubling down on the sentiments expressed in the couple’s joint statement to Page Six regarding the split: “We will always have tremendous respect for each other and our families. We have five beautiful children together and they remain our top priority. We ask for your privacy during this time.”

With people in the Trump administration being fired left and right (by tweet, no less!), it can be hard to keep up with the domestic but equally salacious news coming out of D.C. So, here’s a handy guide to the stories uncovered by tabloids that you probably won’t find in the couple’s imminent memoirs (likely due to an extensive prenup barring as much, if we had to guess), including one bacon-related anecdote which we’d like to believe was truly the straw that broke the camel’s back.

1. Donald Trump introduced the couple and they didn’t get off on the right foot.
Wait, this sounds like a wholesome enough way to meet your soon to be former spouse, no? Well, apparently it was during their first interaction that the couple showed their true colors, using some less than savory language. In an excerpt from the International Herald Tribune (unearthed by gossip columnist Allie Jones) about their first meeting, it was revealed that Donald Trump introduced his son to model Vanessa Haydon not once, but twice in the same evening at a fashion show.

The trio engaged in “awkward” conversation, but nothing came of it until Don Jr. and his future Mrs. met for a third time. Vanessa reportedly remembered Don Jr. as “the one with the retarded dad,” which is nice.

don jr and vanessa .. a beautiful love story from the very beginning pic.twitter.com/TMzghkpETP

Several outlets report that it was downhill from the beginning, and that several friends warned Vanessa not to go through with the 2005 nuptials. Hindsight, 20/20, etc.

2. Don Jr.’s stingy ways were apparently (one) source of marital strain.
According to Page Six, Don Jr. is notoriously cheap. The New York Times wrote that Don Jr. accepted a free engagement ring from a jeweler at a mall in Short Hills, N.J., “in exchange for publicly announcing his engagement there.” And that’s just the beginning.

Page Six also reports that Don Jr. provided Vanessa with very little financial support, leading her to turn to her mother at times.

A representative for Vanessa denied these claims, telling the outlet they are “simply not true. Don and Vanessa have tremendous respect for each other and always have. The notion that she has had to rely on her family for assistance is absolutely false and utterly ridiculous.”

3. There’s a model in the picture, and she’s sharing some suggestive, bacon-related Twitter DMs sent by Don Jr. back in 2011, right after Vanessa gave birth to their third child.
We all know how Don Jr. loves a provocative, sometimes self-incriminating tweet (apparently poor Twitter judgment is a genetic trait?), so it comes as no surprise that he sent a former model a suggestive message back in 2011. Melissa Stetten wrote last week that she tweeted “a joke about pulling a muscle changing a tampon,” to which Don Jr. replied by asking if she “smelled bacon.” He also sent her a direct message in which he flirtatiously noted he was “glad I opted not to send the tweet asking 4pics from ur bathroom tweet last night.”

On the original Twitter chain, he then followed up with another bacon comment, philosophizing about why women don’t wear bacon perfume. He spelled Chanel wrong, too, which is honestly unacceptable for someone who grew up in the literal lap of luxury.

Surprised his marriage didn’t work out since he was sending me DMs a month after his wife gave birth. (I tweeted a joke about pulling a muscle changing a tampon and he replied asking if I smelled bacon? Cool joke) pic.twitter.com/JbuwC1wghf

I deleted my tweets a while ago in this exchange but just found this one pic.twitter.com/VXJ6lL9Ena

His dad is president why hasn’t he deleted these tweets? #bacon pic.twitter.com/ERfjValU9D

His dad is president why hasn’t he deleted these tweets? #bacon pic.twitter.com/ERfjValU9D

A representative for Don Jr. gave People a copy of their complete exchange, in which Don Jr. admitted that “the bacon tweet” was a joke. Ew, just ew. The rep did not deny that he sent the photo comment.

4. There was an alleged affair with a pop star.
Former Danity Kane [Danity Kane (n.) A five-member female pop band that formed on the 2005 season of MTV’s Making the Band; the group released three studio albums between 2005 and 2014] member Aubrey O’Day claims she and Don Jr. had an affair in 2011. 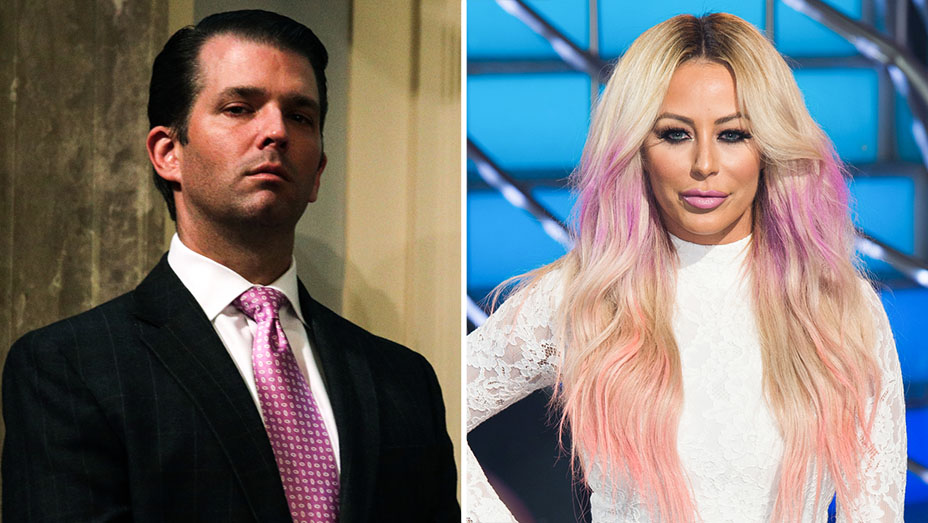 Us Weekly reported Monday that the two met on the fifth season of The Celebrity Apprentice, on which O’Day was a contestant, and dated until March 2012, when Vanessa reportedly found the pair’s email exchange. Us Weekly’s sources say that things got serious between Don Jr. and O’Day quickly, and that she believed he would leave Vanessa for her.

5. And that affair may have paved the way for a song about a scorned lover.
Not surprisingly, it didn’t take long after the news of Don Jr.’s alleged affair with O’Day to launch the unofficial Twitter user investigation into every song the singer has ever recorded. Fans immediately honed in on “DJT,” a song about a scorned lover in which O’Day sings, “Is that what you want? You wanna, you wanna believe that everything with me was a lie? A fantasy? And you want to go back and live in the life that you had have forever?”

6. There have been disagreements at the dinner table — over bacon.
“Thought I was having dinner w @MrsVanessaTrump till i saw her remove bacon from a sandwich,” tweeted notorious bacon aficionado Don Jr. in 2013. “Who are u & what have u done w my wife?”

Thought I was having dinner w @MrsVanessaTrump till i saw her remove bacon from a sandwich. Who are u & what have u done w my wife?

Does anyone else have a Bacon fetish??? It sounds so wrong but tastes so right!