Of all the projects that director-producer Doug Liman tackled in 2018 — he’s got several movies in the works, including the Tom Cruise Edge of Tomorrow sequel, and four TV shows, George R.R. Martin’s Nightflyers and a Suits spinoff among them — one has tried him the most: programming the pingpong table’s LED screen in his Tribeca penthouse loft. “I started trying to wire this scoreboard during the editing of American Made,” he says, “and I couldn’t believe we finished that movie and it made it into theaters and this still wasn’t working. But I got it working during the edit of Chaos Walking,” his 2019 sci-fi feature starring Tom Holland and Daisy Ridley.

Known for being obsessive and hands-on, inveterate tinkerer Liman stayed true to form with his home: Though the renovation of his 3,600-square-foot  penthouse officially started in 2005, he still finds pockets that need upgrading. At the start, however, structural concerns in the building — built in 1880 for the Borden milk company — had him enlisting the Derrick & Love design firm, run by Robin Love and partner David Derrick (who died in 2015). 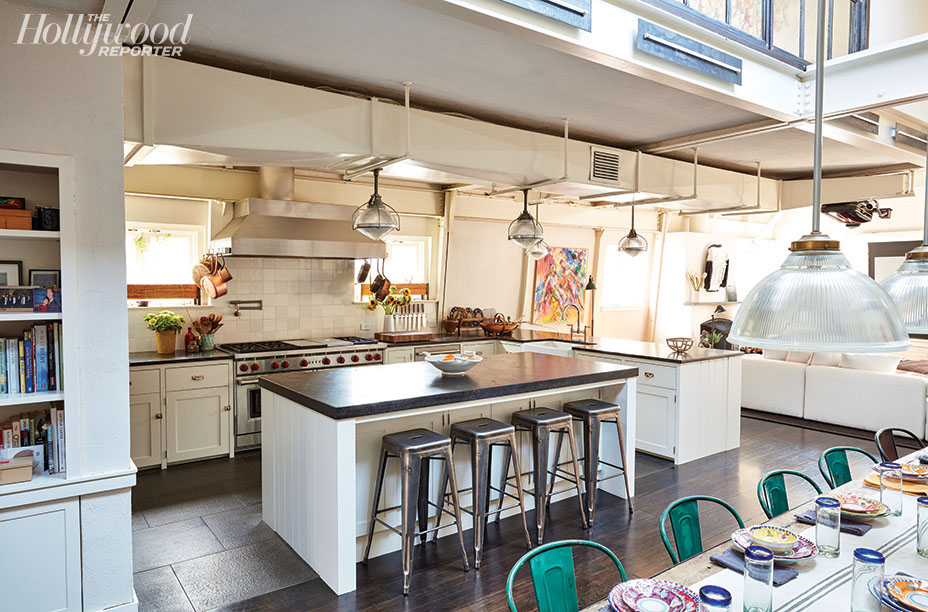 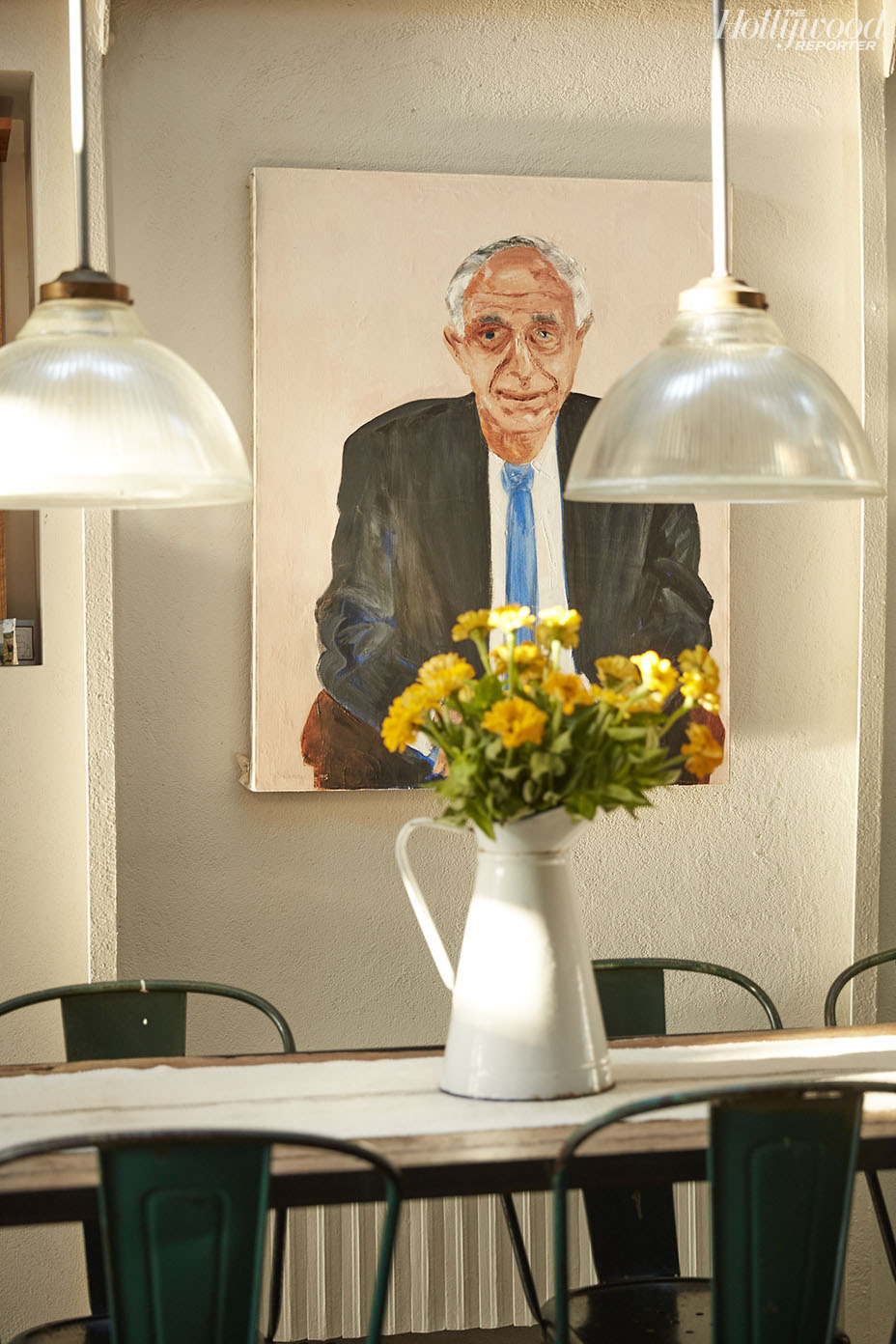 Liman, 53, who throughout the renovations lived in the two-bedroom, two-bath apartment (“I liked when the walls were ripped open because it was like endless possibility,” he says), worked with Love “room by room, figuring it out.” His approach to design mirrors how he makes films, complete with multiple starts and stops, and he’s not ashamed to admit that sometimes he doesn’t know what the end product will look like. Despite the lack of overarching theme or goal, an industrial farmhouse style emerged. “The whole apartment has a kind of industrial vibe,” says Liman. “These are old factory buildings. I really like that aesthetic.”

An elevator opens directly into the light-filled floor-through, featuring exposed metal beams, wood floors, open kitchen, copper skylights and a double-height living room/screening area with fireplace, projector and screen. The total 3,600 square feet includes the main floor of nearly 2,00 square feet, plus a mezzanine with two bedrooms and two bathrooms, and a large, 900-square-foot roof deck that was part of a first round of renovations completed in 2010. The view from the top overlooks much of the changing vista of Tribeca — there’s always new construction — with the gleaming One World Trade Center in the distance. In the loft, references to his films pop up everywhere: a Mr. & Mrs. Smith robe hangs on a door hook, a metal sculpture of Cruise and Emily Blunt in Edge of Tomorrow (a gift from Cruise) sits on the bookcase, and there are Swingers matches in the bathroom. 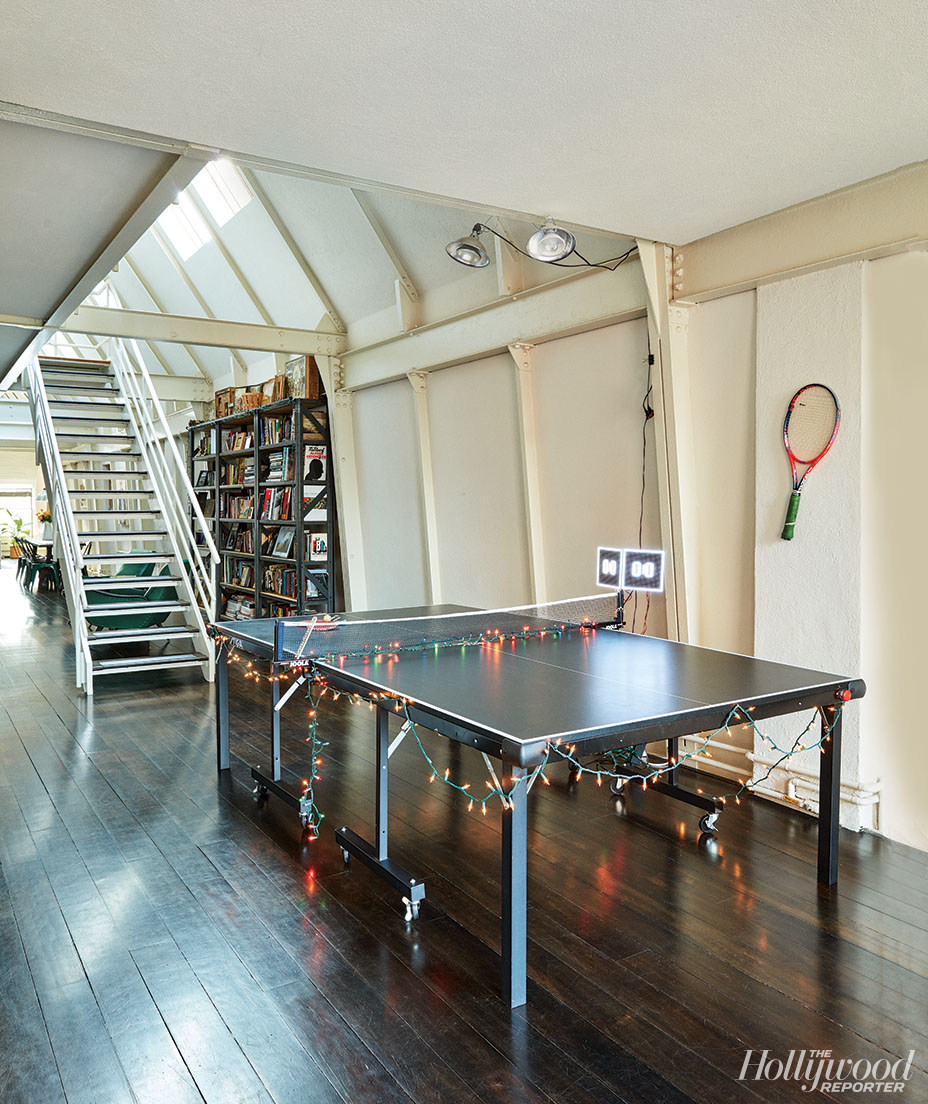 Liman has an aversion to needless decoration, says Love: “Better that it looked like it just grew out of the ground, that it was always there, that it has a natural feel.” The director wanted a worn patina on the reclaimed wood floors (from Antique & Vintage Woods of America in Pine Plains, New York), and he let the black-gray soot stains remain on the white brick just above the fireplace. Liman also has a fondness for early- to mid-20th-century antiques from the Brimfield Antique Flea Markets in Massachusetts. “There’s a bit of a ship look to the place, but Doug has a love for the farmhouse, traditional kind of Americana,” says film editor and frequent guest Saar Klein (Almost Famous, The Bourne Identity). This makes sense: Liman bought a farmhouse in Martha’s Vineyard in 2006, where he keeps two sheep, a goat (Ruby) and a garden. 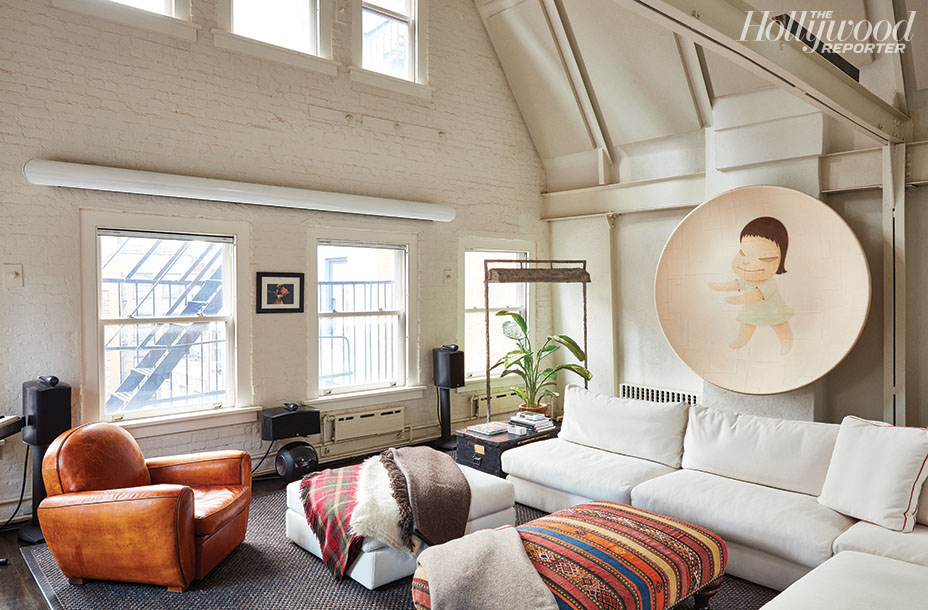 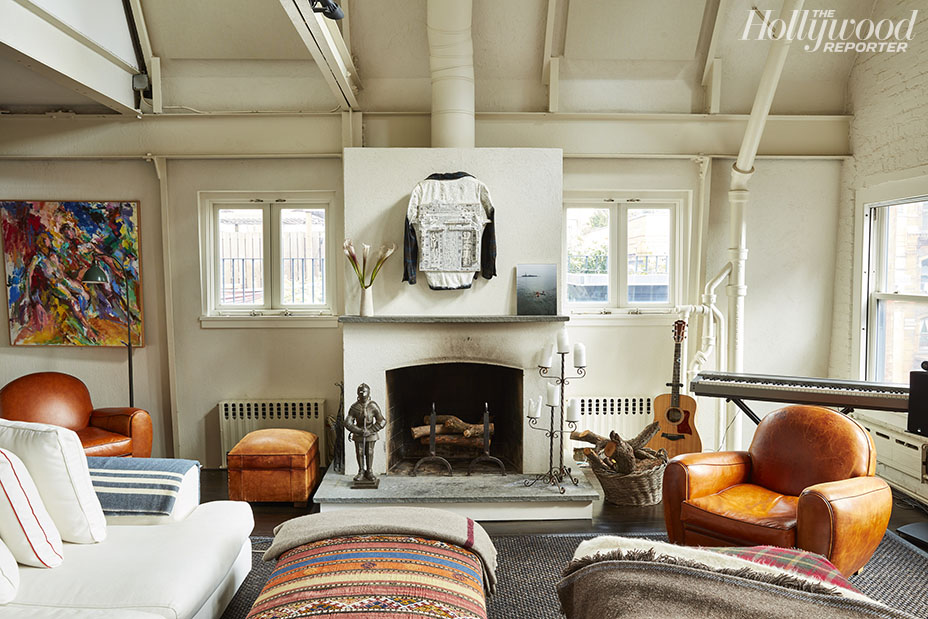 The Tribeca loft was actually his second choice in Manhattan. He originally wanted to buy an apartment he was renting in SoHo after Swingers was made, but neighbors became irate when a drunken friend lay passed out in the elevator for a few hours on a Sunday. “It’s probably better for the co-op board not to have lived with you before they decide whether they want you as a neighbor,” Liman notes. They kicked him out, after which he chose the first and only property he looked at, paying $2.8 million in 2000.

Because the building is historic — Liman’s apartment features the only surviving steel beams from the original Penn Station — he needed approval for many of the changes. First to go were the Andersen windows, which Love says looked very “1970,” to be replaced with historically correct, custom-made ones by Woodstone, based on photos taken in the 1930s for tax purposes. “We replaced every window in the space,” says Love, “He went the extra mile to make them exactly right.” The windows separating the mezzanine from the main floor were reclaimed from the old New York Times building on West 43rd Street. Liman found them in the architectural salvage store Olde Good Things.

One of his most cherished pieces is a framed Wall Street Journal illustration, by S.B. Whitehead, depicting Liman’s infamous squabble with Universal. “I had these notorious fights while I was making Bourne Identity,” over surreptitiously reshooting scenes when his requests had been denied, “and they got talked about publicly because my friend John Gill, who was writing for Premiere magazine, lived with me for a month and did a story on the making of Bourne Identity, not knowing that he’d witnessed this catastrophic fight between me and the studio, and it became very public — stuff that normally wouldn’t be public. The Wall Street Journal did a story, and back then they did drawings. So this was the drawing of me and Matt Damon blowing up the screenplay. See the dynamite? It’s next to the screenplay with an angry studio executive in the background. My mom called The Wall Street Journal and got the original artwork.” 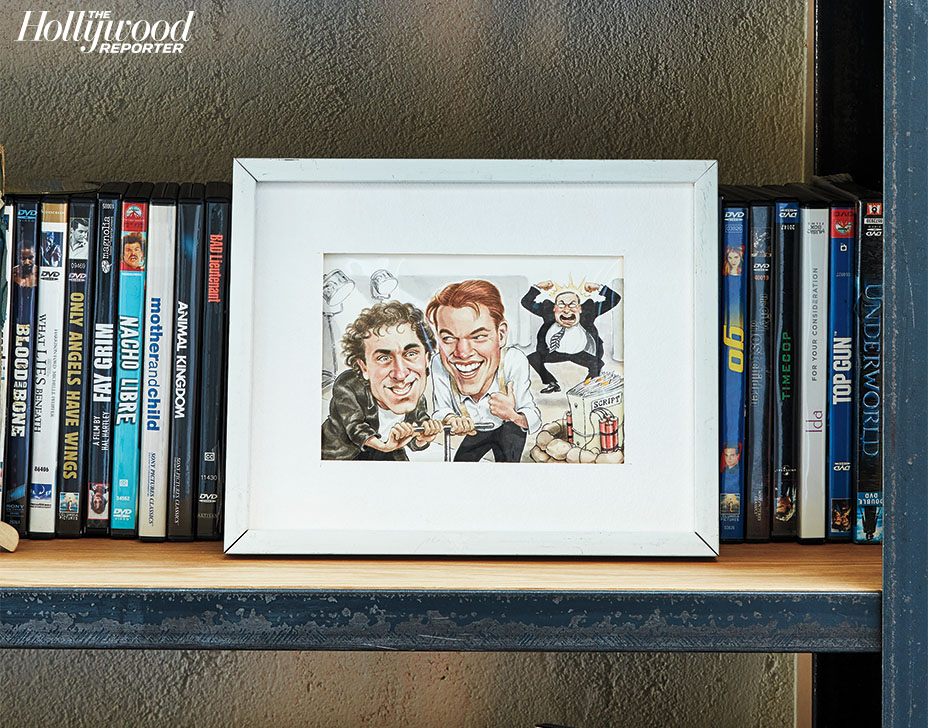 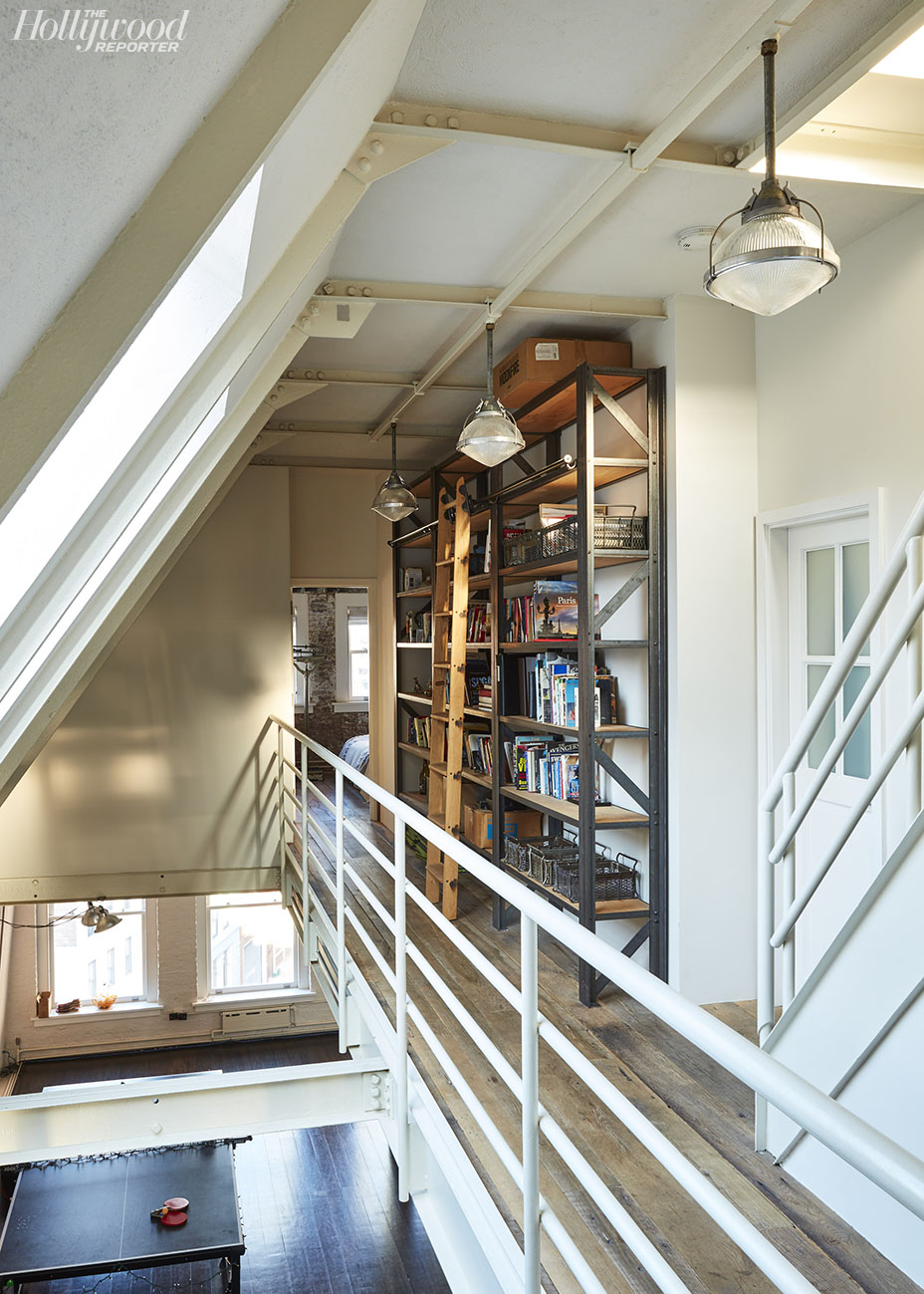 The centerpiece of the home is a large portrait of Liman’s father, Arthur, a big influence on the director. Painted by Liman’s mother, Ellen, it presides over the dinner table. The late Arthur Liman was a nationally respected attorney who ran a legal clinic for the poor, and was the Senate’s lead counsel in the Iran-Contra/Oliver North hearings; clients of Arthur’s helped seed money for Swingers. Many of the CIA-related details in The Bourne Identity and American Made came from stories that Liman’s father told him as a youth. A framed New York Times front page from Jan. 23, 1987, with a photo of Arthur as part of the hearings, hangs in the bathroom.

When he’s not working, Liman is either playing tennis or tinkering. At one end of the loft in a light-filled nook, he’s set up a work area with rolling tool case, wooden bench, and a closet full of spare parts. “I’m building props and things all the time,” he says, “but not the things that will end up in the movie for real.” An example: “When I made Jumper, I wanted to practice what it looks like for somebody to teleport. These were handy strong beams, so — I’m a climber and I have climbing gear — I would use harnesses and ropes and attach them to the beams and practice what it would look like for somebody to teleport.”

The work area is also where he keeps his (yes) tennis-racket stringing machines. Liman tiled the original kitchen backsplash himself with tiles procured in Morocco after The Bourne Identity shoot wrapped, welds metal to build his own planters and custom-programmed the lighting throughout his loft. He is also a licensed pilot and once flew a plane to meet Robert Ludlum at his Montana home.

The director has a revolving door: “I’ve had like 20 friends with keys to this apartment,” he admits. “Most of them are in the film business, and I like them feeling at home.” Quasi-tenants include business partner Dave Bartis, a former HBO and NBC exec who executive produced Edge of Tomorrow, and director-writer Kate Maberly, who is working on the film The Forest of Hands and Teeth. “I’ve learned he’ll say yes to me staying there and then I’ll find out he also said yes to somebody else,” says Bartis. “And then I have to figure out who’s going to sleep on the couch. It’s kind of crazy, especially when he goes on production in Atlanta or Montreal or wherever — a constant churn of people in and out of that place.” The guest bedroom is even dubbed “Saar’s room” because Klein stays at the apartment so often. “There’s a bunch of other freeloaders too,” he jokes, “but I consider it my room since all my shit’s in there.”

At least once a month, Liman, who is unmarried, throws informal parties that “could include Keegan-Michael Key, a heart surgeon and some cryptocurrency whiz kid,” says Klein. Screenings take place in the living room, just past the kitchen, so the director can feed people as they digest cinema. If there’s no obvious occasion, Liman, whose signature dish is avocado pizza, will create one: “It’s someone’s birthday or someone’s going away, someone’s just come to New York. It’s just an excuse to cook and eat and have fun. It’s not like a caterer’s coming — we’re making the food ourselves. That’s the point of the party.” The director still hangs out with pals he made at Brown, where he graduated in 1988 — the same friends who helped him get kicked out of the apartment in Soho. A photo of the gang now sits on one of Liman’s bookshelves; it shows nine people crammed into an elevator made for two. No matter whom he’s entertaining, the kitchen becomes organized chaos: “As he’s making pizza,” says Bartis, “there’s flour everywhere and different toppings and dough being rolled out; it’s sort of a mini version of directing for him.” 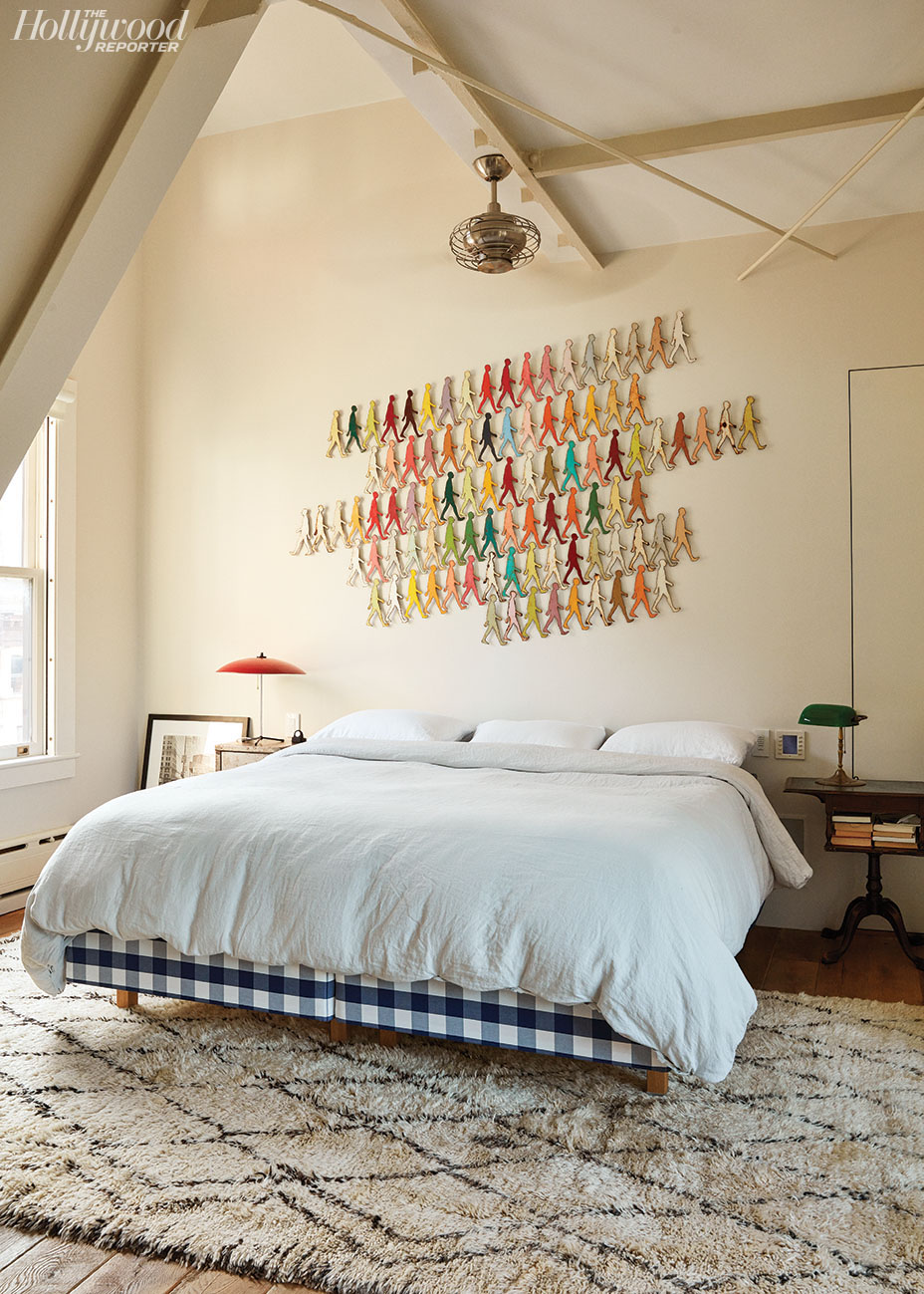