To his 53.4 million Instagram followers, he’s @ChampagnePapi, and now Drake owns a bubbly line to back up his popular handle. The Canadian rapper and producer — who is up for seven Grammy Awards on Sunday, including Album of the Year for Scorpion – is also becoming known for his talent in wines and spirits. His latest debut is Mod Sélection, a line of Champagnes he’s creating with Brent Hocking, the West Hollywood-based wines and spirits producer best known for launching DeLeón Tequila in 2009.

The first two releases, Mod Réserve (a white champagne) and Mod Rosé, have arrived on store shelves and are priced between $300 and $400 per bottle. From the juice to the bottle design, every detail is meant to position Mod Sélection at the top of the price spectrum. (Bottles of Jay-Z’s Armand de Brignac, nicknamed Ace of Spades, can be found at similar price points in NV or non-vintage, and Rosé.)

“After meeting Brent, you pretty much become an expert by association, but I’ve always loved champagne and had a palate for luxury spirits,” Drake told The Hollywood Reporter of his partnership with Hocking, adding that it was born from a referral by someone who saw the two men as kindred spirits, no pun intended. “Early on, somebody was like, I know the equivalent to you in the spirits business, a guy who relentlessly dedicates his entire existence the most authentic, the most innovative, the best of everything. That was how we became partners, but we’ve been friends for years and years … we have many things that we’ve always wanted to do, and this was always at the top.” 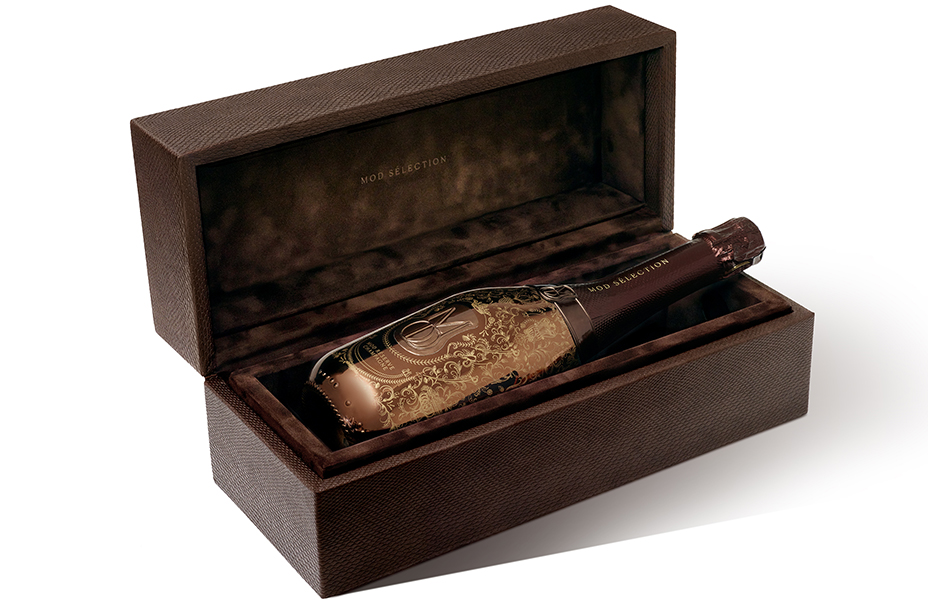 Hollywood’s relationship with the wine and spirits industry has resulted in a variety of high-profile partnerships: John Legend’s LVE Wines; Ryan Reynolds and Aviation Gin; and George Clooney and Rande Gerber’s Casamigos Tequila, which they developed and heavily promoted before selling the ultra-premium spirit to alcohol giant Diageo in 2017 for up to $1 billion (the final figure is dependent on sales over 10 years).

Not unlike those examples, Drake wanted to directly involve himself in something he genuinely loves, Hocking says. “What drew me to Drake was that he clearly was interested in how I was making it, how I was designing it,” he notes. “He didn’t want to be just a bystander, someone who thinks all he has to do are some social-media posts. He wanted to come to blind tastings with me, he wanted to be intimately involved in every aspect. This has been his passion project.”

The pair first met in 2013 to discuss developing a Champagne, but Hocking cautioned his new partner that the right sparkling wine might require several years from concept to finished bottle. “I had already been working on a Champagne after finding a family that had only distributed in France,” Hocking explains of the winery, located in the Vallée de la Marne and dating back to 1892. “They had an exquisite product that the world wasn’t aware of, and I knew we could develop the most beautiful, high-quality Champagne together.”

“The juice is always the most important thing, and Brent is the guy you want to depend on when it comes to that,” Drake says. While waiting for their Champagne to mature, Drake and Hocking partnered on another project: Virginia Black Whiskey, which launched in 2016. The 80-proof whiskey has received high marks both for its smooth taste and the upscale look of its bottle, crafted of etched glass and topped with a gold cap.

The pair took a similarly luxe approach to the design for their Champagne bottles. “A bottle like this never existed before,” Hocking says of the design, a handcrafted bottle in a metallic chocolate hue, etched in a delicate floral pattern also intended so no two are exactly alike. Above a pewter label, the foil is embossed with a snakeskin pattern; the bottle is then housed in a suede-lined leather gift box that’s meant to be a keepsake. “We wanted to create something you would want to hang onto after the fact, another detail that went into creating a Champagne gift that felt truly special,” Hocking adds.

The name Mod Sélection takes its name from the idea of “a modern interpretation of the tradition, heritage and elegance that is Champagne,” Hocking says. Plans are in the works for follow-up debuts to Mod Réserve and Mod Rosé, including magnum and double-magnum bottles before the end of March, as well as blanc de blanc and blanc de noir Champagnes and limited-edition cuvees.

“This is a product that has been years and years in the making,” Drake points out. “‘Authenticity’ is probably the best word we continue to use. It’s a genuine bond, a genuine connection, something that we fully believe in and fully stand behind.”