Before Dwayne “The Rock” Johnson inevitably commences his presidential run, he might want to first try running for president of the cutthroat HOA at North Beverly Park, where he’ll have his legendarily callused hands full dealing with some of SoCal’s most high-maintenance residents, folks who live in what is often considered the most exclusive and expensive guard-gated community in Los Angeles. Hollywood’s highest paid actor (the Fast & Furious franchise, the Jumanji franchise, Ballers) and his wife Lauren Hashian have a new mansion in the community, where some of their nearest neighbors include Denzel Washington, Sly Stallone, Rod Stewart, Eddie Murphy and Sofía Vergara.

Last week, Johnson rolled out $27.8 million for a particularly lavish estate within Beverly Park, which sits high in the mountains above Beverly Hills. The deal went down quietly and closed off-market, though the property was very briefly available for sale earlier this year with a $30 million ask. His Rockness quickly negotiated $2 million and change off the list.

The property has a star-studded past: It was sold to The Rock by Hollywood actor Paul Reiser (Mad About You, Beverly Hills Cop, Stranger Things); before that, the estate had been owned by rocker Alex Van Halen, who built the place in 1993. The Mediterranean-style compound sports a main mansion and a detached, 2,500-square-foot guesthouse, for a total of nearly 18,000 square feet of living space.

Spanning more than 3.6 usable acres on one of the neighborhood’s most private lots, the previous listing described the house as “a complete resort.” That’s not an exaggeration, as the palatial property includes truly wow-worthy amenities: a world-class gym, full-size tennis court, an at-home baseball diamond — yes, a baseball diamond — dozens of olive trees, an elevator, movie theater, a music studio — installed by Van Halen, naturally — plus both indoor and outdoor swimming pools. 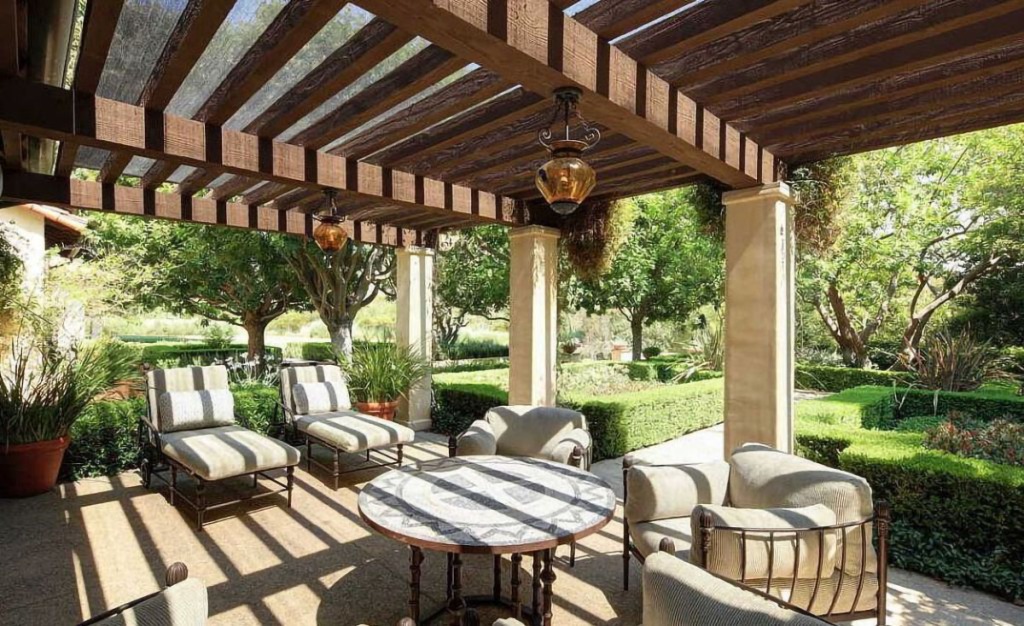 Set at the very end of a quiet cul-de-sac behind iron gates, a long, olive tree-lined driveway meanders up to a pea gravel motorcourt anchored by a central stone fountain. Ivy-encrusted archways and authentic Mediterranean landscaping make the place feel more akin to an estate in Tuscany than just another L.A. mansion. The red tile-roofed mansion sprawls out over its lot, with a series of turrets, balconies and covered loggias. An indoor, lap-lane swimming pool sits in a room with mint green walls and French doors opening to the backyard.

And when he’s not in California, Johnson and his family are often spending time in the semi-rural town of Powder Springs, Georgia, about an hour by car northwest of Atlanta, where he owns a 45-acre equestrian estate. That pastoral property popped up for sale earlier this year, carrying a $7.5 million pricetag.