Long before Kardashian became a household name, when the Trump spawn were too young to understand the meaning of the word “complicit,” there was another wealthy family that ruled pop culture: The Carringtons of ABC’s hit soap, Dynasty.

Flash forward 36 years after the original family drama starring Joan Collins, Linda Evans and their towering shoulder pads was introduced to America in 1981, and we find ourselves reacquainted with the Carrington brood — well, the 2017 version — thanks to The CW remake, which stars a cast of regulars who were not yet a glimmer in their parents’ eyes when the original series debuted. 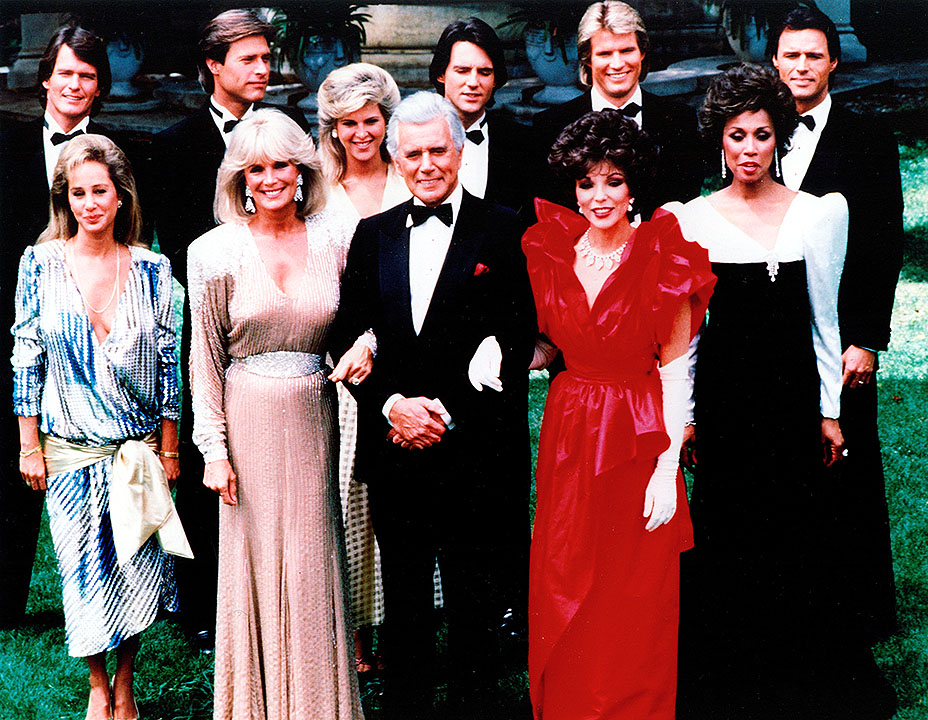 With such a tremendous time gap between the original and the present-day adaptation, which premieres Oct. 11, costume designer Meredith Markworth-Pollack found herself in the unique position of wanting to pay homage to the gloriously over-the-top fashion that was a hallmark of the 1980s hit thanks to costume designer Nolan Miller, and finding a way to draw in viewers in The CW’s millennial/Gen Z age demo.

“There’s so many young viewers that have no idea what the original is,” said Markworth-Pollack, whose past credits include a gig in Gossip Girl‘s wardrobe department. She added that she herself was too young to have watched the ABC series when it was on the air, though she’s been attempting to binge watch the original (she admits she’s only gotten through the first two of nine seasons). “The show has to stand alone, but we also have to acknowledge the amazingness of the original.” 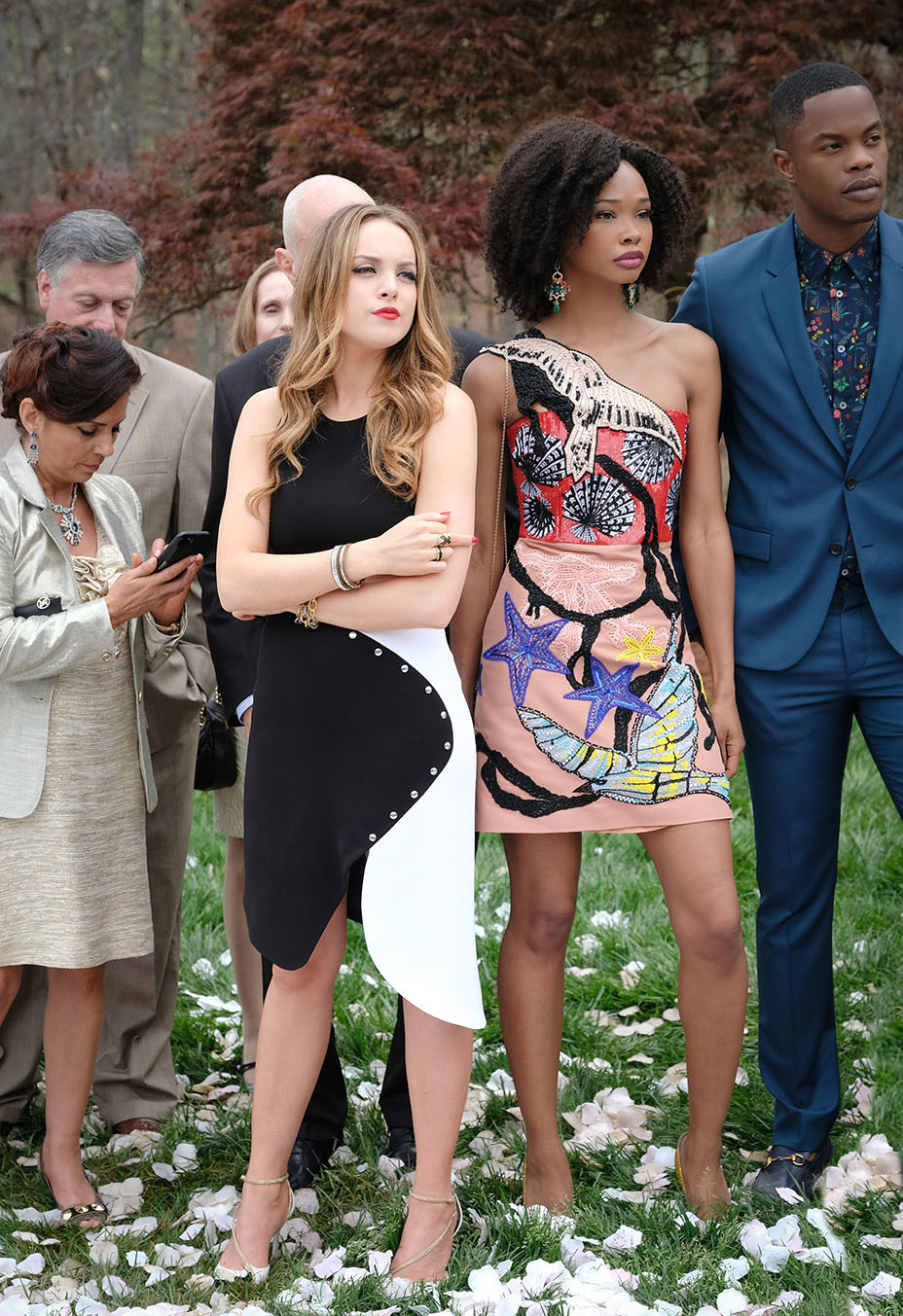 One would think it helpful, then, that ‘80s influences have returned to the runways with flashy vengeance — sparkle, volume and even a bold shoulder have come full circle. However, Markworth-Pollack’s vision for the women on the show includes more subtle references to the high-fashion trends, rather than strictly off-the-runway looks. The method makes sense, considering the Carringtons reside in a mansion in the hills of Atlanta, not the streets of New York City.

The series’ central female characters, Fallon Carrington (Elizabeth Gillies) and Cristal Flores (Nathalie Kelley) serve as foils of each other when it comes to style. Fallon, the firecracker daughter of patriarch Blake Carrington, grew up entrenched in lifestyle of the uber rich, and thus has a different approach to getting dressed. “I really wanted her wardrobe to be more architectural,” said the costumer designer, citing influencer/editor Giovanna Battaglia as a real life reference. (In terms of inspiration, Markworth-Pollack said she stayed away from IRL dynasties, including the Hadids and Kardashians.) “Because she’s born into the wealth, she has a confidence and is used to the luxury of being over the top. Fallon dresses for her own pleasure — and she’s versatile. We didn’t want her to be pigeon-holed.”

To execute that confidence, Markworth-Pollack pulled pieces from Alexandre Vauthier, Marc Jacobs and Mugler (a black-and-white cut out mini dress from the show’s pilot episode is a Mugler standout), which she picked up at local department stores on location in Atlanta. “She always has this solid look to her and is very different from one day to another,” she notes. “Gucci is kind of perfect for her.”

Then there’s Cristal, who is marrying into the Carrington wealth. “She’s much more feminine — we used softer, creams and neutrals and pastels.” She also wanted to pay homage to Cristal’s Venezuelan roots by choosing Latin designers like Juan Carlos Obando and Johanna Ortiz, as well as a steady rotation of Stella McCartney, Celine and Chloe.

As there are lots of high-powered business women in the remake, Markworth-Pollack also had the opportunity to redefine the concept of an office wardrobe, one which no longer requires power pantsuits to make an authoritative statement. “I wanted to show that it’s not that world anymore where a woman has to dress like a man,” she said. “They can be soft and sexy in the office.”

Another standout fashion star is the tech-entrepreneur Jeff Colby (Sam Adegoke), whose wardrobe, Markworth-Pollack notes, is heavily influenced by the well-dressed men in bespoke suiting who live and work in Atlanta. “I didn’t want to go down the cliche road of crazy bling, over the top,” she said, adding that though he wears the occasional flashy Gucci piece, it’s pared back with pieces from Bally and Paul Smith. “He’s more refined, with this style. He has a good eye. He cares very much. He’s fun.”

But it’s not just the fanciful wardrobe that the costume designer is responsible for — she has a close relationship with showrunners Stephanie Savage and Josh Schwartz, and hinted that she played a part in an upcoming reference to Melania Trump’s infamous stilettos. “I saw [Melania wearing stilettos boarding the plane to tour Houston] and I texted the showrunner,” she said, staying mum on the exact plot details. However, she added that when it comes to fashion in the dialogue, the team will consult her. “If there’s a designer mention, anything related to fashion and wardrobe, they ask me my thoughts.”